US-China relations: is there still a trade war under Joe Biden’s presidency? 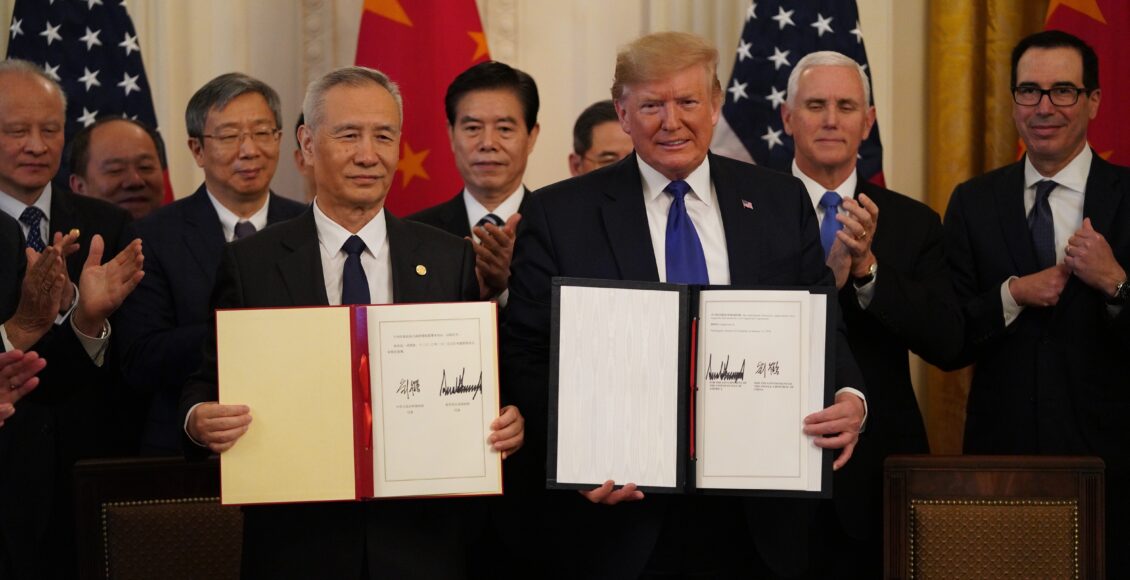 How did the trade war start?

During his 2016 presidential campaign, Donald Trump promised to reduce the trade deficit with China. He claimed it was based in large part on unfair Chinese trading practices, including intellectual property theft, forced technology transfers, a lack of market access for American companies in China, and an uneven playing field caused by Beijing’s subsidies for favoured Chinese companies.

China, meanwhile, believed that the United States was trying to restrict its rise as a global economic power.
The US and China are the two largest economies in the world, and Chinese foreign trade grew rapidly after its ascension to the World Trade Organization in 2001, with bilateral trade between the US and China totalling almost US$559 billion in 2019.

US places 25 per cent duties on around US$34 billion of imports from China, including cars, hard disks and aircraft parts. China retaliates by imposing a 25 per cent tariff on 545 goods originating from the US worth US$34 billion, including agricultural products, automobiles and aquatic products

US places 10 per cent taxes on US$200 billion of Chinese imports. China responds by placing customs duties on US$60 billion of US goods

Xi Jinping and US counterpart Donald Trump agree to a ceasefire at the G20 summit in Argentina, with the US suspending a tariff from 10 per cent to 25 per cent on US$200 billion of Chinese goods that was due to come into force on January 1

China suspends tariffs on US-made cars and car parts for three months from January 1, and also resumes its purchase of US soybeans

US Department of Commerce announces the addition of Huawei to its “entity list’, which effectively bans US companies from selling to the Chinese telecommunications company without approval

China announces that it will establish its own unreliable entities list

China increases tariffs on US$60 billion worth of US products

Xi Jinping and Donald Trump agree a trade war truce at the G20 summit in Japan, delaying the imposition of new US tariffs of up to 25 per cent on US$300 billion worth of Chinese goods

Donald Trump announces that planned levies on many of the US$300 billion of Chinese products threatened to start in September 2019 have either been delayed or removed. Levies of 10 per cent on US$155 billion of products such as including phones, laptop computers and video game consoles will be delayed until December 15.

China announces tariffs of 5 and 10 per cent on US$75 billion of US goods from September 1 and December 15. China also confirms it will reinstate tariffs on US cars and car parts from December 15

China announces that it will offer exemptions to 16 types of US imports from additional tariffs, which include products such as pesticides, animal feeds, lubricants, and cancer drugs. Donald Trump agrees to delay new tariffs on US$250 billion worth of Chinese goods from October 1 to October 15 as a good will gesture to avoid the 70th anniversary of the People’s Republic of China

China announces it will exclude imports of US soybeans, pork, and other farm goods from additional trade war tariffs

China and the US sign a phase one trade deal. As part of the deal, China agree to buy an additoinal US$200 billion of American goods and services over the next two years. The deal results in the suspension of a planned December tariff on around US$162 billion in Chinese goods, with an existing 15 per cent duty on imports worth around US$110 billion halved

China halves additional tariffs on US$75 billion of American products imposed in 2019, including automotive and agricultural goods like pork, chicken, beef and soybeans, chemicals, crude oil, whiskey, and seafood. China also lifted an import ban on live poultry products from the US

China allows imports of barley and blueberries from the US

Dozens of US imports from China, including disposable face masks, respirators, Bluetooth tracking devices and musical instruments, are granted short extensions to previous tariff exemptions until the end of 2020

China decides to exempt additional tariffs on a batch of 16 US products, including shrimp seeds, grease oil and medicines, for another year

However, that trade was lopsided, with the US running a large and growing trade deficit with China. This became a major political issue during the 2016 US presidential campaign. The US trade shortfall rose to US$375.6 billion in 2017 before the start of the trade war, up from US$103.1 billion in 2002. The deficit rose further to US$378 billion in 2018.

When did the US-China trade war start?

The US-China trade war started on July 6, 2018, when the US imposed a 25 per cent tariff on US$34 billion worth of Chinese imports, marking the first in a series of tariffs imposed during 2018 and 2019.
It continued to escalate, with the US and China imposing various import tariffs on each other’s products until an agreement in principle on a phase-one trade deal was reached in mid-December 2019.

At its peak at the end of 2019, the US had imposed tariffs on more than US$360 billion worth of Chinese goods, while China had retaliated with import duties of its own worth around US$110 billion on US products.

What is the phase-one trade deal?

The phase-one trade deal was formally signed on January 15, 2020, with its provisions taking effect one month later.

Trump and China’s chief negotiator, Vice-Premier Liu He, signed the agreement at the White House. As part of the deal, China agreed to buy an additional US$200 billion worth of American goods and services over the following two years, compared with 2017 levels.

Those additional purchases would be made up of around US$77 billion in manufacturing, US$52 billion in energy, US$32 billion in agricultural goods and US$38 billion in services. The latter includes tourism, financial services and cloud services.

China’s monthly trade with US 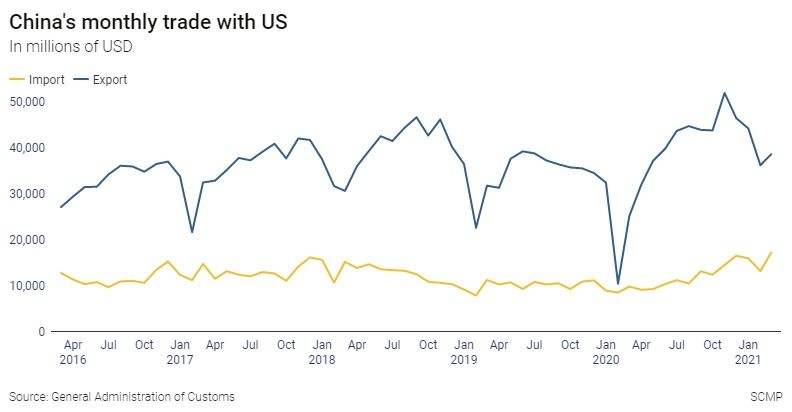 China also pledged to remove barriers to a long list of US exports, including beef, pork, poultry, seafood, dairy, rice, infant formula, animal feed and biotechnology, according to Trump.

The deal also resulted in the US suspending a planned 15 per cent tariff on around US$162 billion of Chinese goods, with an existing 15 per cent duty on imports worth around US$110 billion halved to 7.5 per cent. China also suspended retaliatory tariffs.

What is the status of the phase-one trade deal?

According to a report by the Peterson Institute for International Economics in February 2021, US exports of phase-one goods in 2020 fell more than 40 per cent short of the target.

The report said China’s imports of goods covered by the phase-one deal were 13 per cent higher in 2020 than in 2019, although this was partly the result of a low base from one year earlier, due to China’s retaliatory trade war tariffs on US goods.

US exports to China of products covered by the Phase One deal in 2020 failed spectacularly—falling more than 40% short of the target.@ChadBown explains why the deal is a flop: https://t.co/ZdxTlVEZlb pic.twitter.com/gPMvWAGLcj

Semiconductors and semiconductor manufacturing equipment, though, exceeded the target by 27 per cent, although the report said this was due to Chinese buyers, including Huawei Technologies Co., stockpiling supplies in anticipation of the US restricting exports of certain products on national security grounds.
Sales of medical products to China also hit 111 per cent of the target due to demand caused by the coronavirus pandemic.

Agricultural exports fell 18 per cent short of the target in 2020. Significant purchases of goods such as pork, corn, cotton and wheat helped, but declines in soybeans and lobsters dragged the figure down. Also as part of the deal, China lifted import restrictions on a raft of American farm goods, including poultry, pork, soybeans and barley.

China’s quarterly trade surplus with US

In millions of USD

China’s imports of energy products met just 37 per cent of the commitment, the report said. Liquefied natural gas hit 89 per cent of the target, but coal hit just 14 per cent and crude oil 45 per cent. This may have been in part due to historically low oil prices over much of 2020.

How will a Joe Biden presidency impact the US-China trade war?

Before his presidential inauguration, Joe Biden confirmed he would not make any “immediate moves” to lift tariffs the Trump administration had imposed on imports of Chinese goods before a full review of the existing phase-one trade deal and consultations with US allies.

In an interview with The New York Times published at the start of December 2020, Biden said the “best China strategy” was to get all traditional US allies in Asia and Europe “on the same page”, which will be his major priority “in the opening weeks” of his presidency.

Biden said his trade policies would focus on “China’s abusive practices”, including “stealing intellectual property, dumping products, illegal subsidies to corporations” and forced technology transfers.
In February 2021, US Treasury Secretary Janet Yellen told CNBC that tariffs on China put in place by the Trump administration would be “kept in place for the moment”.

A “top-to-bottom review” of China’s trade policy by the Biden administration is set to include how to approach Trump’s phase-one trade deal with Beijing that expires at the end of 2021.

New US Trade Representative Katherine Tai said in March 2021 that a trade meeting between China and the US would take place “when the time is right”, and that US tariffs on Chinese imports would remain as “no negotiator walks away from leverage”.

Tai added in May 2021 that the review would include what to do with many expired exclusions from Section 301 tariffs on Chinese imports, noting that “time is of the essence” in completing the review.
Two sources familiar with the discussions said at the start of May that top trade negotiators from China and the Biden administration were moving towards holding their first conversation to review the phase-one trade deal.

Towards the end of May 2021, the US and the European Union issued a joint statement saying that they can partner to “hold countries like China that support trade-distorting policies to account”.
The statement was issued by Tai, US Secretary of Commerce Gina Raimondo and European Commission executive vice-president Valdis Dombrovskis.