China has unveiled its most sweeping rescue package to bail out a real estate market mired in a record slowdown and deepening liquidity crunch, according to people familiar with the matter.

The People’s Bank of China and the China Banking and Insurance Regulatory Commission on Friday jointly issued a notice to financial institutions laying out plans to ensure the “stable and healthy development” of the property sector, said the people, asking not to be identified as the matter is private. Unlike previous piecemeal steps, the latest notice includes 16 measures that range from addressing the liquidity crisis faced by developers to loosening down-payment requirements for homebuyers, the people said.

As part of the rescue plan, developers’ outstanding bank loans and trust borrowings due within the next six months can be extended for a year, while repayment on their bonds can also be extended or swapped through negotiations, the people added.

The move is the strongest sign yet that Chinese policy makers are easing a years-long clampdown on the property sector, one of the biggest drags on the world’s second-largest economy along with the nation’s dogged Covid Zero policies. Authorities also issued a sweeping set of measures to recalibrate their pandemic response on Friday, publicly outlining a 20-point playbook for officials aimed at reducing the economic and social impact of containing the virus.

Taken together, the policy shifts by President Xi Jinping’s government will likely ease two of the biggest headwinds to China’s growth outlook and add fuel to a market rally that sent a gauge of Chinese shares in Hong Kong up 17% in the past two weeks.

It’s a stark reversal from the gloom that descended over markets in late October, after Xi’s elevation of close allies to the highest rungs of power stoked concern that ideology would trump pragmatism for the most powerful Chinese leader since Mao Zedong. The Hang Seng China Enterprises Index has now erased losses suffered in the immediate wake of last month’s Communist Party Congress, swinging from one of the world’s worst-performing stock gauges to among the best.

The central bank and the banking regulator didn’t immediately reply to requests for comment out of working hours on Sunday.

Authorities have sought to defuse the property crisis with a raft of measures in the past few months, including cutting interest rates, urging major banks to extend 1 trillion yuan ($140 billion) of financing in the final months of the year, and offering special loans through policy banks to ensure property projects are delivered.

China also expanded a key financing support program designed for private firms including real estate companies to about 250 billion yuan this week, a move that could help developers sell more bonds and ease their liquidity woes.

One of the biggest policy changes in the latest notice is to allow a “temporary” easing of restrictions on bank lending to developers.

China began imposing caps on bank’s property lending in 2021, as authorities sought to tighten the reins on a bubble-prone industry and curb leverage at some of the nation’s largest developers. Banks not meeting the current restrictions will be given extra time to meet the requirement, said the people.

In addition, regulators encouraged banks to negotiate with homebuyers on extending mortgage repayment, and emphasized that buyers’ credit scores will be protected. That may alleviate the risk of social unrest among homebuyers who have engaged in a widespread boycott on mortgage payments since July.

China’s $2.4 trillion new-home market remains fragile and property debt defaults have surged. Price declines in the existing-home market were the most extreme in almost eight years in September, according to the latest official data. At banks, the proportion of bad loans related to property has surged to 30%, according to Citigroup Inc. estimates. 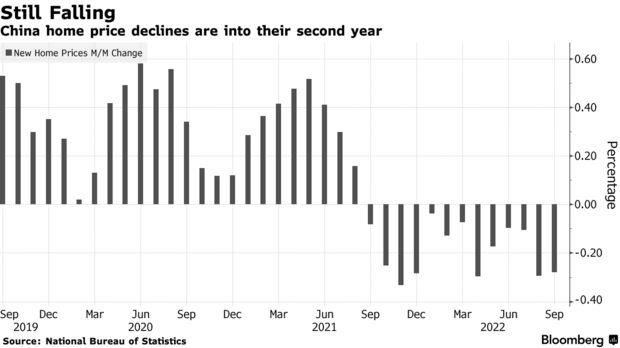 Still, the financial backstop is dwarfed by the looming debt maturities facing developers. China’s property sector has at least $292 billion of onshore and offshore borrowings coming due through the end of 2023. That includes $53.7 billion in borrowings this year, followed by $72.3 billion of maturities in the first quarter of next year.

China property crisis: if last year was bad for the likes of…