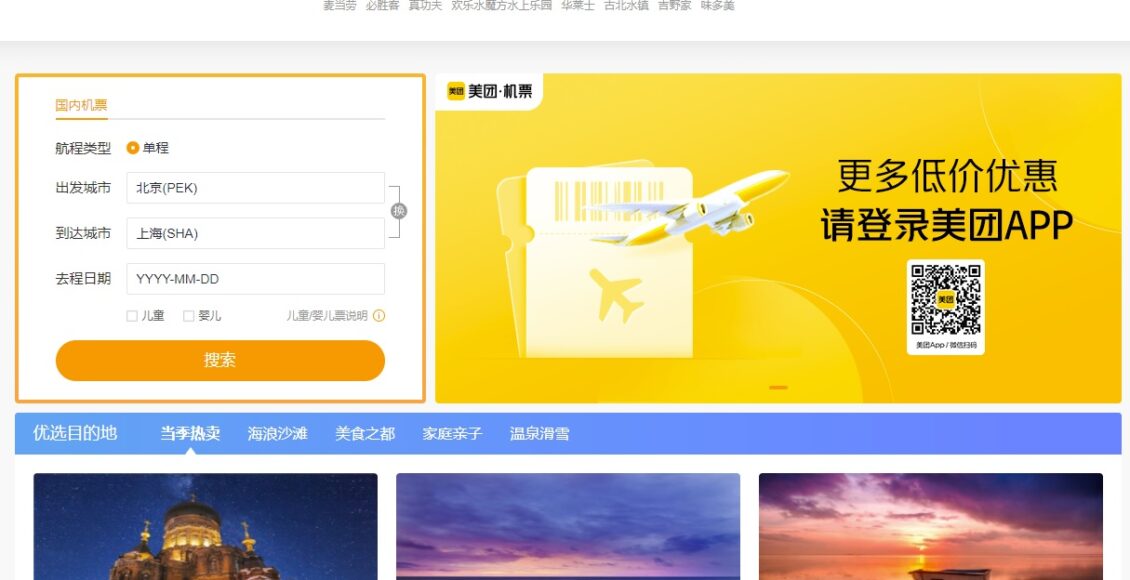 At the height of the Spring Festival holiday in 2013, a young man called Guo Qing was, like millions of Chinese across the country, enjoying a customary reunion dinner with his family in China’s northern Henan province when he encountered a prickly problem: His home was too small to accommodate all the relatives that were planning to stay.

Guo instinctively turned to Trip.com, a ubiquitous hotel booking service, to find a room for the night. But he was frustrated to find that the online travel agency did not have any listings for the small county he was living. Eventually, he had to roam the quiet streets late at night, enduring sub-zero temperatures, trying to find a bed.

Seven years later, Guo is exacting his revenge on Trip.com in a spectacular fashion.

As the general manager of the hotel and travel booking arm of food delivery giant Meituan-Dianping, he has transformed the division from an afterthought into one of the firm’s core money churners and challenged the might of China’s OTAs.

After the COVID-19 pandemic dragged a wrecking ball through the travel industry last year, Meituan’s tourism operations have recovered faster than anyone else. By the third quarter of 2020, revenue from hotel, in-store, and travel bookings had returned to pre-pandemic levels and beyond, rising 4.8% year-on-year. In contrast, it’s archrival Trip.com has seen a lackluster recovery. By the end of last year, Trip.com’s net revenue was still down 40% compared to the same period last year.

In 2012, few would have imagined that Meituan would come to dominate China’s online hotel booking industry. The two-year-old firm was focused on its core business of offering group deals for local services, modeled off the success of Groupon. But Meituan was hemorrhaging cash as it strived to fend off other competitors also offering steep discounts.

To stabilize the firm and return it to profitability, Meituan’s founder and CEO, Wang Xing, split his employees into teams to explore new revenue streams in local services ranging from movie ticketing to bike-sharing, with promises of further resources and funding if they achieved breakthroughs.

The hotel booking division was created in 2013 under this initiative. Nicknamed “Watermelon” by its founding team, it got off to a rocky start, signing 120 deals with small-town hotels in the first month of its existence.

As the team got to work, a fierce pricing war was raging around them between the two titans of the Chinese hotel booking industry, Trip.com and eLong.

Trip.com was the unquestioned market leader. From train and flight tickets to luxury hotels and car hires, the firm was extending its grip within and beyond China’s shores.

But in its way stood eLong, an online travel provider founded in the same year as Trip.com, on the eve of the new millennium.

Even as Trip.com sought to attract business travelers with package offers to allow customers to purchase air tickets and book a high-end hotel, eLong was moving in the opposite direction. It ditched air tickets and package tour offers, focusing solely on marketing low-cost hotel bookings.

By the first half of 2012, this strategy was paying off, with hotel reservations on eLong reaching half the number of those made on Trip.com.

The conflict became a war of attrition. By the end of 2013, Trip.com was still targeting eLong customers with promotions claiming that “Every hotel (booking) on Trip.com is 10% cheaper than on eLong,” while eLong CEO Cui Guangfu publicly proclaimed that “two-thirds” of all hotel bookings on Trip.com were, in fact, more expensive than eLong.

As Trip.com and eLong were locked in bickering and hemorrhaged cash, Meituan’s “Watermelon” raked up notable successes under the new leadership of Guo. Inspired by his 2013 mishap, he focused on inking deals with small hotels in China’s lower-tier cities and towns. Long neglected by travel operators and lacking the promotional power and customer base of popular chain hotels in China’s business hubs, many seized on the opening provided by Meituan. At the peak of their deal-making, Guo’s team was signing on 6,000 hotels a month, and low and mid-end hotels would make up 90% of Meituan’s hotel offerings in 2017.

Guo also banked on the big players being too distracted by their price war to notice Meituan’s growth. “Everyone underestimated us and thought we had nothing to play for because Meituan’s hotels are too small,” he said.

This view was indeed shared by the likes of Liu Jian, who was in charge of back-office operations for eLong’s hotel reservations at the time. “(The belief at that time was) isn’t Meituan dealing with dining and entertainment? How can they possibly be able to master a complicated hotel booking system?” he said. Liu has since left eLong to join Meituan.

eLong never had a chance to respond to Meituan’s stealthy rise. By 2015, it had decisively lost its pricing war with Trip.com. In May that year, Trip.com acquired a strategic stake in eLong after teaming up with tech giant Tencent to buy American travel firm Expedia’s 37.6% stake in the company. In 2018, eLong was merged with another mid-tier travel booking provider, the Tongcheng Network, of which Trip.com is also a major shareholder.

But just as Trip.com was declaring victory, Meituan was readying a strike in its backyard.

The success of Meituan in the budget hotel booking sector was reaping rewards for Guo and his team, with the division being upscaled to an independent arm of the company in 2014. Guo was promoted to a vice-presidential role in the company.

But skepticism greeted the team’s next decision to break into the high-end hotel market. Critics warned Guo that it was a challenging market to succeed in. “There were people internally and friends externally advising us not to enter the high-end business,” he recalled.

Despite the warnings, there were few doubts about the necessity of such a move. For all of Meituan’s dominance, it was translating to little profit for the firm. The low price range of its hotel offerings limited profits from commissions. In 2017, Trip.com made nearly four times as much in commission fees from an average hotel room booking than Meituan.

Guo spied a chink in Trip.com’s armor to exploit. For years, Trip.com had been using its market dominance to hike commission fees. But by 2017, it was alienating key partners, especially when it deliberately reduced the visibility of high-end hotel chains like Marriott International and InterContinental on its booking platforms to gain leverage in fee negotiations. The last straw came when it forced high-end hotel chains in the southern Fujian city of Xiamen, a popular tourist destination, to accept a commission hike to 25%.

Between 2016 and 2018, Meituan established global distribution agreements with more than 130 high-end hotel chains, including the Shangri-La Hotels and Resorts Group, Hilton Hotels and Resorts, and the InterContinental.

The team made full use of another tool in their arsenal by targeting users of Meituan-Dianping’s popular food delivery and in-store dining booking app. In mid-2019, more than 90% of hotel bookings came from referred users using these services.

Trip.com market dominance slipped rapidly. By Q1 2018, according to mobile app data provider Trustdata, Meituan had a 46% market share in the Chinese hotel bookings market. Trip.com came in a poor second, with just 22%. The number of domestic hotel room nights on Meituan was double that of Trip.com’s.

Still, Trip.com was not hitting the panic button. In 2019, Chen Ruiliang, the CEO of its hotel booking unit, struck a confident tone, touting the 1.4 million hotels listed on the platform worldwide.

Then the COVID-19 pandemic struck.

No one in the travel industry managed to escape the impact of the Covid-19 pandemic when it prompted lockdowns and plunges in mass travel last year. A survey of 203 hotels by the China Hospitality Association in April 2020 found that over half of all respondents struggled to repay outstanding payments from suppliers, even as an overwhelming 96% reported a sharp fall in revenues.

Trip.com bore the brunt of economic pain, experiencing an RMB 1.5 billion operating loss in Q1. While Meituan’s operating profit from in-store, hotel, and travel businesses plunged by 57% year-on-year, it managed to eke out a quarterly profit of RMB 680 million.

While some budget and low-tier hotels which formed the backbone of Meituan’s booking service shut their doors permanently, it also reduced the supply of budget rooms in the market. As China’s economy reopened, demand from more spending-conscious consumers spooked by the pandemic fueled a sharp rebound.

In contrast, luxury hotels have been hit harder. HVS, a hospitality consulting firm, found in a survey involving 498 businesses that luxury and upscale hotel chains were more likely to register a major drop in bookings during the pandemic, with occupancy levels averaging 10%. Border measures to prevent imported cases have largely favored budget and economy hotels, in which travelers from abroad are required to quarantine. Luxury chains like the Hilton and IHG have announced the closure of hundreds of their Chinese branches due to the pandemic’s impact.

Trip.com’s overreliance on business and luxury travel has led to a tepid recovery. Meanwhile, Meituan is signaling its desire to capitalize on Trip.com’s woes, with a resumption of its rapid expansion in the high-star hotel sector. By the first quarter of 2021, luxury hotel stays made up 16.7% of its room bookings.

But up until now, Trip.com has refrained from a direct confrontation with Meituan. That may be about to change as its recovery gains momentum after early hiccups. In Q1 of this year, the company made a net profit of RMB 1.78 billion.

Meanwhile, Meituan’s success in the hotel sector risks being eclipsed by the mounting woes of its other business operations. In the same quarter, the company reported an RMB 4.85 billion loss incurred primarily from its expansion into the community group-buying business, nearly double the figure from the same period last year. The company is also under investigation by Chinese regulators for anti-competitive practices.

Guo often tells his team that one should attack when their opponent is at their weakest. If history is any guide, Meituan will know that in the hospitality industry, competitors are more than willing to live by his advice.

Alibaba, Meituan are top picks at Daiwa in sector upgrade as internet stocks to…

Consider Trip.com As A Turnaround Bet

Alibaba, Meituan paid the bulk of China’s US$3 billion antitrust fines in 2021,…

Should You Consider New Oriental Education (EDU) as a Good…