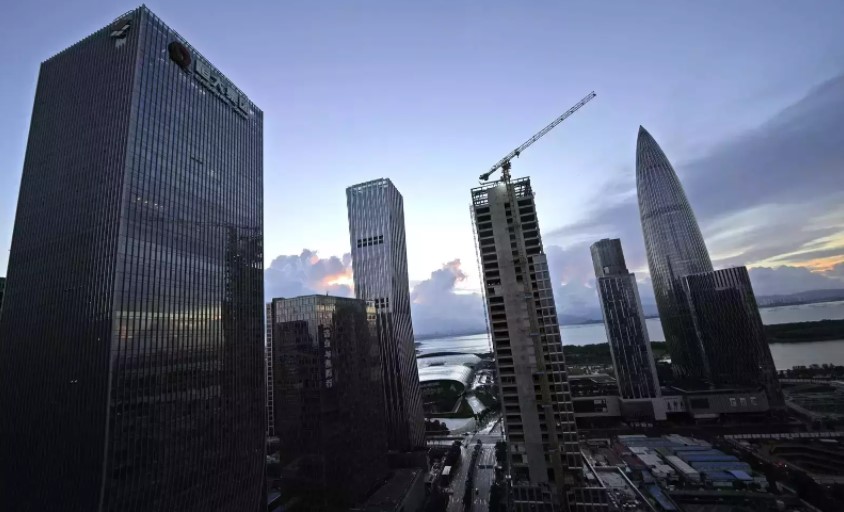 A sudden drop in the bonds of Shimao Group Holdings Ltd. sparked a broader selloff amid renewed concern over the health of Chinese property firms.

Chinese junk bonds fell 2 cents after Shimao’s dollar bonds dropped as much as 10 cents on the dollar, according to credit traders. Trading was halted in three of the company’s yuan bonds after they plunged. Its Hong Kong-listed shares tumbled almost 14%, poised for their biggest loss since 2008.

The firm is looking into market rumors during the weekend that caused the selloff, according to an emailed response to queries from Bloomberg News.

Adding to the bearish sentiment, the Communist Party’s top decision makers reiterated the phrase that “housing is for living in, not for speculation” at the end of a three-day annual Central Economic Work Conference. The phrase hadn’t been used in Politburo’s preparatory meeting last week.

Shimao was the biggest loser on a Bloomberg Intelligence stock index of real estate firms, which slid 1.7%. The firm’s dollar bond due 2022 fell 5 cents on the dollar to 83 cents, Bloomberg-compiled prices show. 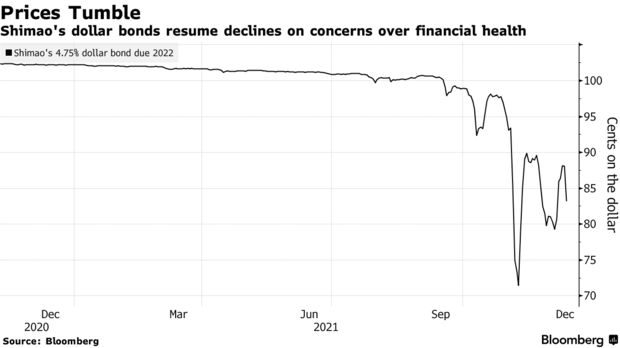 Shimao is China’s 13th biggest developer by contracted sales and among the largest property debt issuers with about $10.1 billion in outstanding local and offshore bonds. The company has a junk Ba1 long-term rating from Moody’s Investors Service and is on review for a further downgrade. Shimao lost its investment-grade rating at S&P Global Ratings last month, but has an investment-grade rank of BBB- at Fitch Ratings.

A bond issued by one of Shimao’s local units suffered the largest haircut in China’s exchange-traded repo market last week, according to Bloomberg-compiled data. Borrowers putting up a Shanghai Shimao Jianshe Co. note due 2025 for collateral get just 35% of the note’s face value as cash, down from 50% the prior week.

“A major price collapse or a downfall of Shimao will cause lapse in confidence in cross-over investment grade names in China property, which acts as the final refuge for the sector,” according to Anthony Leung, head of fixed income at Metropoly Capital HK. The impact could be more devastating than debt crises at Evergrande or Kaisa because they were of much lower credit quality, he added.

Shimao’s contracted sales will be weaker than S&P previously forecast due to “tough” business conditions, while the company may struggle to deleverage in the next 12 months, the credit assessor said on Nov. 10.

China’s property developers remain under pressure from slowing sales and a wall of bond maturities coming due in January, according to Citigroup Inc. analysts. That means credit stress has yet to reach a maximum and weaker firms are likely to default, the analysts said.

Foreigners turn sellers of Chinese shares in July on COVID…

From splurge to ‘common prosperity’: Alibaba…