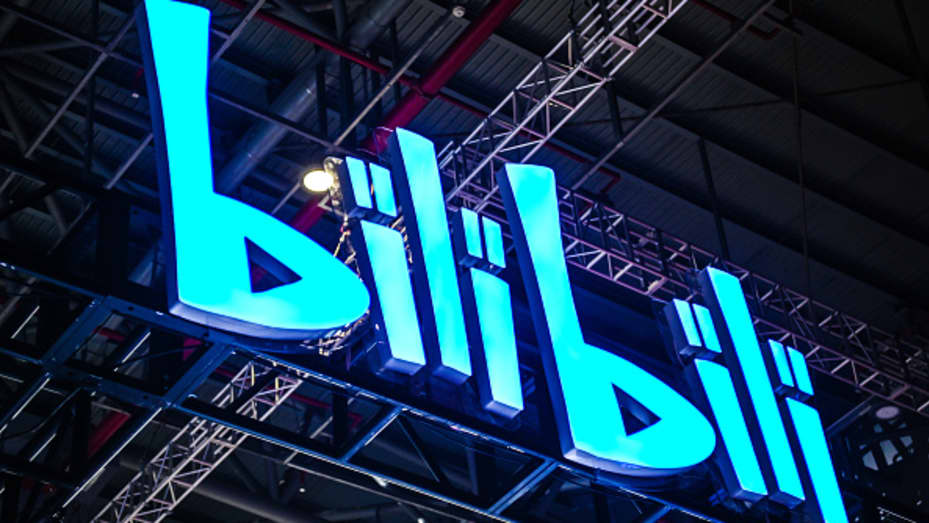 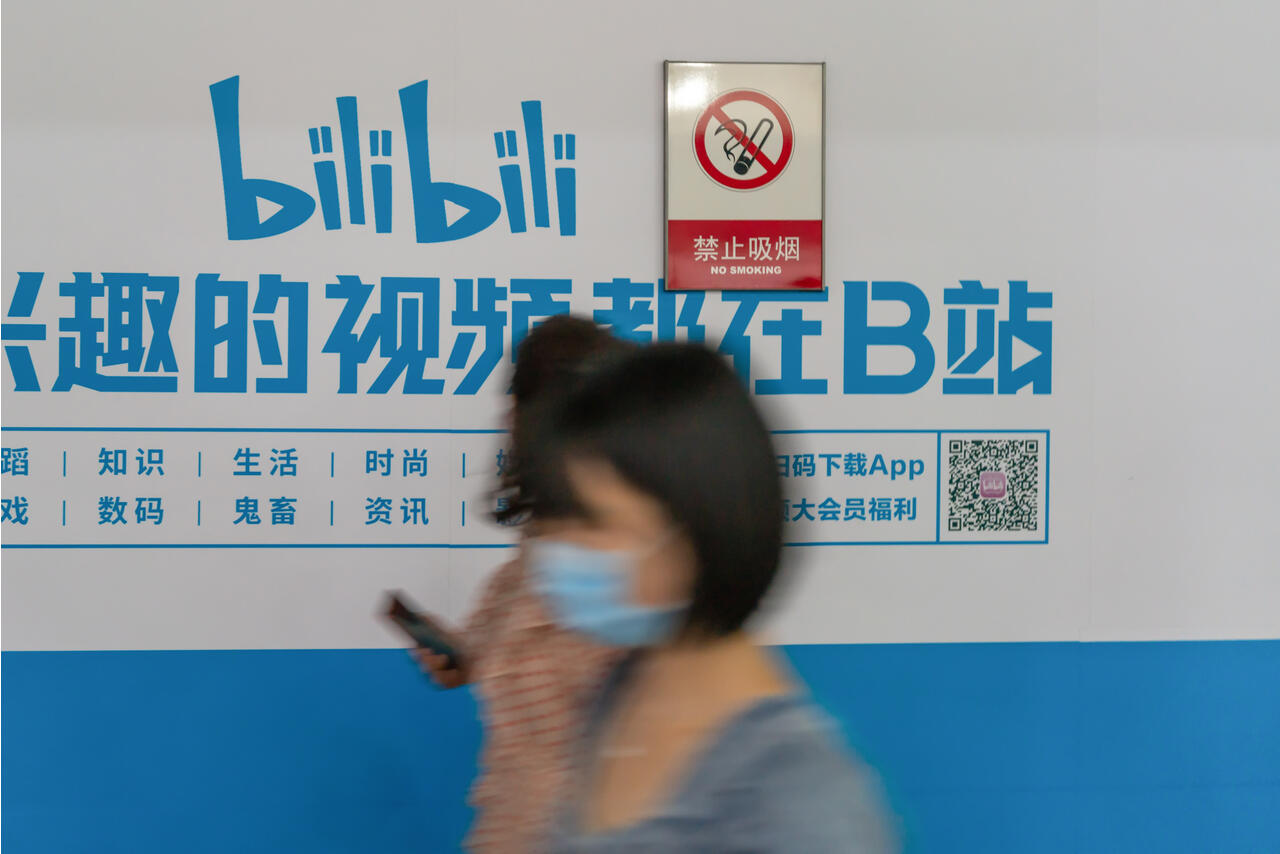 Alibaba-Sony-and-Tencent-backed Bilibili, often touted as China’s answer to YouTube, is firing on all cylinders. For the financial year ended 2020, revenues jumped 77% YoY to CNY 11.9 billion, accelerating from 2019 when revenues rose 64% YoY. The momentum continued in Q1 2021, with revenues rising to CNY 3.9 billion, up 68% YoY.

There is reason to be optimistic about the company’s prospects. Starting as a platform for anime video and user generated content primarily centered around ACG (anime, comics, games) content, Bilibili amassed a loyal following of anime-loving Gen-Z users in China and building on that success, Bilibili diversified into other categories of content including lifestyle, fashion, vlogs, documentaries, movies, and other verticals notably esports and livestreaming.

Along with that product diversification effort, Bilibili has been working on diversifying revenue streams as well in an effort to reduce reliance on revenues from its Mobile games unit – its biggest revenue generator for several years.

Mobile games accounted for 40% of revenues in 2020 however its share has been dropping (from 71.1% in 2018, and 53.1% in 2019) and by the fourth quarter of 2020, “value added services” which includes premium subscriptions, live streaming, comic book platforms surpassed mobile games as Bilibili’s biggest revenue generator, indicating the company’s efforts to diversify beyond mobile game distribution is paying off as these new revenue streams have emerged as major revenue drivers. 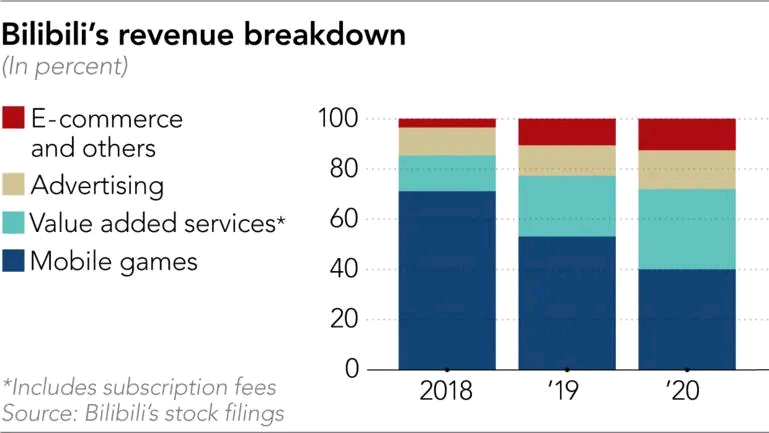 To further build on these emerging business segments, Bilibili is working to broaden its audience beyond its core Gen Z users (the average age of Bilibili users is 22.8 years and more than 86% are under 35), through content category expansion and branding efforts which would help increase its user base, increase user engagement and thereby open more monetization opportunities across all of Bilibili’s three new growth engines.

Bilibili’s category expansion strategy involves encouraging genres that appeals not just to Gen Z users but also to a broader audience, such as automobiles, relationships and fitness; this strategy is fitting because not only would it help the platform expand its user demographics without alienating its core user base, but it could also increase user engagement among its core users who will be served with a wider variety of content to satisfy a broader array of interests.

With more content genres set to broaden its audience, more content creators in turn could be motivated to join the platform lured by its vast and growing userbase.

Management is aiming to increase MAUs to 400 million by 2023 which should incentivize even more content creators to join and thereby create a positive feedback loop between users and content creators leading to sustained growth in the Bilibili platform and opening more monetization opportunities.

It could be argued however that for a company in hypergrowth mode, such losses are not unusual. Moreover, a closer look reveals much of the bottom line deterioration is largely due to the company’s heavy marketing expenditure aimed at brand building efforts; Bilibili has been spending heavily on branding campaigns, promoting its brand proposition – Bilibili – All The Videos You Like – reflecting the company’s ambition to grow beyond anime, comics, and games and position itself as a one stop destination to search for a variety of content, and thereby galvanize its effort to entice a wider audience to its platform.

The company’s marketing and sales expenses nearly tripled and accounted for 29.1% of the company’s revenues in 2020, up from a 17.7% share in 2019, which unsurprisingly contributed to the company’s deteriorating bottom line. Brand building however could be viewed as an investment, and thus despite the short term pain associated with this effort, it could well translate into long term gains resulting from strong brand equity such as brand loyalty, and brand awareness which in turn translates into better pricing power.

Gross margins are often associated with pricing power and on this metric, Bilibili appears to be seeing results; while operating margins and net margins headed south pressured by heavy marketing expenses, gross margins went the opposite direction rising from 17.5% in 2019 to 23.6% in 2020, perhaps an early indication the company’s brand building efforts are bearing fruit.

Going forward, given the company’s ongoing aggressive growth ambitions as well as future growth plans (such as a seeming intention on cracking into the mobile payments space), it is quite unlikely the company will turn a profit in the foreseeable future.

Bilibili found early success in through its focus on ACG content which was a big differentiator in China’s crowded and highly competitive video streaming market. However, with the company going mainstream, Bilibili risks morphing into a jack of all trades and master of none platform not much different to the many other players in China’s crowded video streaming universe.

Xigua Video – owned by TikTok owner ByteDance – for instance is probably Bilibili’s closest competitor in terms of its heavy reliance on professional user generated videos (PUGV), however Bilibili’s ACG focus meant it captured China’s Gen Z users while Xigua Video who had no specific focus appeared to cater to older viewers (more than 86% of Bilibili’s users are under 35 compared with Xigua Video where over one third are over 41 years old).

Having conquered China’s short video market with its hit app Douyin (ByteDance’s Chinese TikTok twin), ByteDance is likely to set its sights on the mid and long form video content market as well and the company stands out as a formidable competitor who could potentially challenge Bilibili’s mainstream ambitions.

Nevertheless, Bilibili would still retain certain differentiating characteristics, even if going mainstream dilutes its original ACG appeal. Xigua Video largely focuses on video content and has little else beyond that, in contrast to Bilibili which offers content across different content categories such as games, and comics as well products through its e-commerce business as well.

Furthermore, Bilibili’s “community culture” which is generally recognized as helping Bilibili enjoy a relatively sticky userbase is another differentiator. Unlike other video platforms, Bilibili users have to pass an exam before coveted features such as bullet comments are unlocked. Bilibili had 102.6 million official members a 51.1% increase YoY and their retention rates are above 80% according to their annual report.

Bullet comments running across a video on Bilibili – here, DingTalk’s “apology video” begs students to stop giving its DingTalk app a 1-star rating and give it more stars.

Please take note valuation can be subjective so this is not addressed. However, it is worth noting that Bilibili’s share price has jumped six-fold since the start of the pandemic and thus may be better suited for investors with a relatively higher appetite for risk and a willingness to hold the stock for some time.

Bilibili’s efforts to diversify beyond mobile games is paying off with the company’s revenue growth being powered by its Advertising, VAS and e-commerce business units.

To further drive growth in these new revenue streams, Bilibili is working on expanding its userbase beyond its core Gen Z users to embrace a wider audience. In doing so, the platform stands to benefit from network effects as rising user numbers encourage more content creators, helping transform Bilibili from a niche ACG-focused platform into a one stop destination for a broad ecosystem of content, and thereby open tremendous monetization opportunities.

Increasing brand recognition, an ongoing evolution to transform itself from niche subculture to mainstream video streaming giant, as well as diversified revenue streams that are synergistic suggest ample runway for top line growth going forward. Although profitability is as yet elusive, it could be within reach as it grows its user base and captures a bigger slice of China’s video streaming market.