New Oriental: What EDU Is Doing Now To Pivot After New Regulations 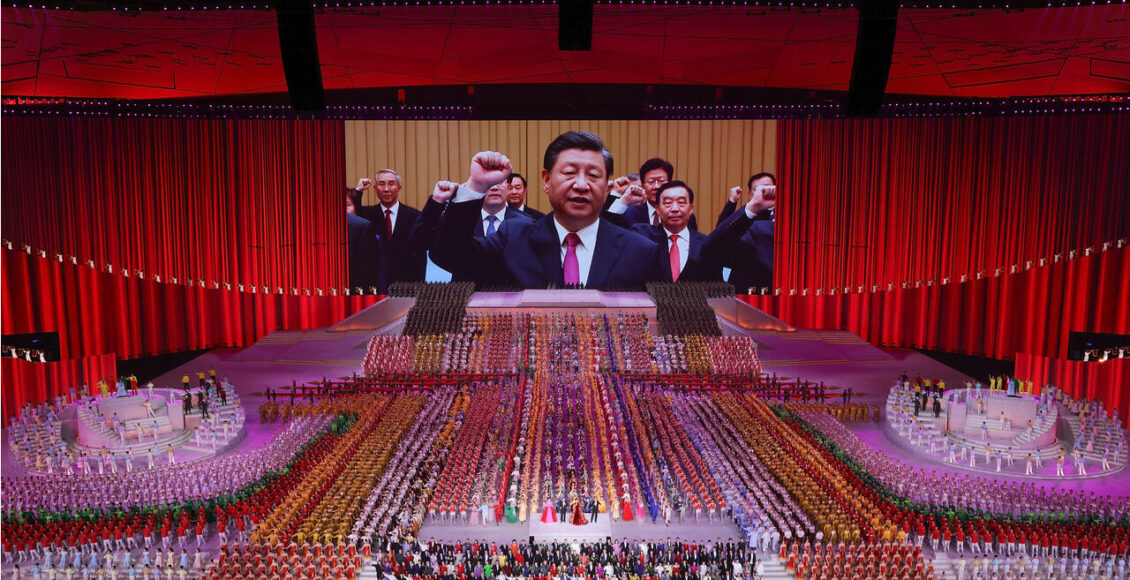 The latest take: A quick recap

The onslaught of ongoing Chinese regulations continues into this week, and New Oriental and its largest peer TAL Education continues to feel the pressure of even further scrutiny (don’t leave anything to the imagination in this policy environment).

In my latest (briefer) research update for EDU today, I want to share with you where I think the market is at for Chinese tutoring stocks, the general Chinese market in general with their regulations, and what these companies are doing to pivot based on my analysis of what types of job roles they are posting on LinkedIn. Two weeks is a very long time with the incredible volatility, so it’s time for a research recap.

As a reminder, if you have not read my previous research reports on New Oriental, please read about my in-depth analysis on the ongoing policy landscape in my article titled “New Oriental: The beginning of a new chapter in Chinese Education.”

As a quick summary of thematic points I’ve mentioned in my previous research articles, what we now know is the following:

As you know, Big Tech in the U.S. is so powerful and rich with resources that EVEN if the U.S. government wanted to stop them, it’s honestly too late. The FANG companies have gotten too powerful and trying to stop “anti-monopolistic” behavior in the U.S. is becoming more and more difficult as the country now is dependent on these companies.

China wishes to avoid being in the position of having major tech companies rule their policies and also doesn’t want to be put in a position where their future population cannot sustain the economic ambitions that Xi Jinping has set out for the country.

To do so, China has now set out to heavily regulate several industries, with tutoring being the first major sector that was global headline news a few weeks ago. Although the news front has been quieter for this sector in the past several days, there still have been developments I believe are important to talk about.

Now I’m going to do a deeper dive into what I think the entire industry might be up to as a whole and by doing so help you understand that absent a delisting of New Oriental and TAL, they are already adapting to survive while other companies are going under. 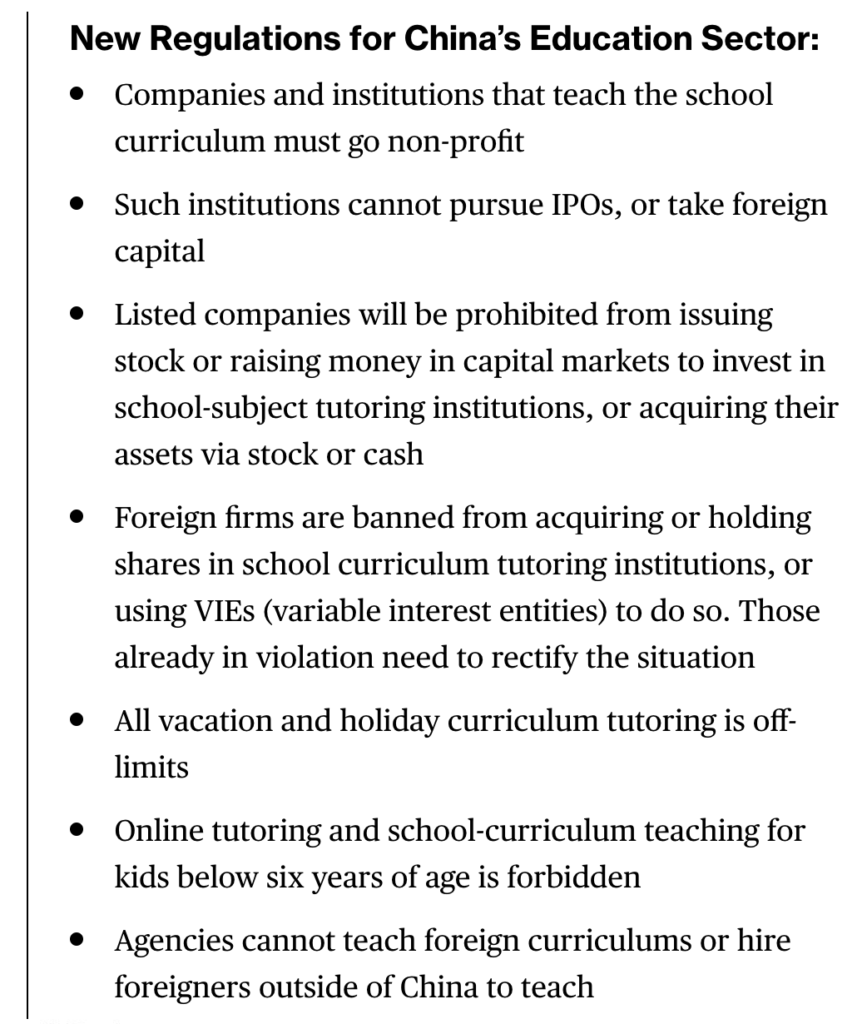 Out of all the policies, I believe the most important detail is that overseas investment is prohibited in companies that teach school subjects, and that any company in violation must rectify the situation.

The reason for this is that China does not want their education industry to be influenced by foreign capital, which can then influence the direction of their school curriculums. This kind of thinking is consistent with the new ban on teaching of foreign curriculums and tighter scrutiny over the import of textbooks.

Even prominent startups like VIPKid are now having trouble in their business model because they are no longer allowed to connect oversea tutors to Chinese students. Now there is a ban on teaching of foreign curriculums, tighter scrutiny over the import of textbooks and forbidding the hiring of foreign teachers outside of China. This hurts startups like VIPKid the most because they connect overseas tutors to Chinese students.

How New Oriental is starting to pivot and adapt

What I found was interesting in that New Oriental’s most recent job posts as recently as 3 weeks ago included teaching roles in: 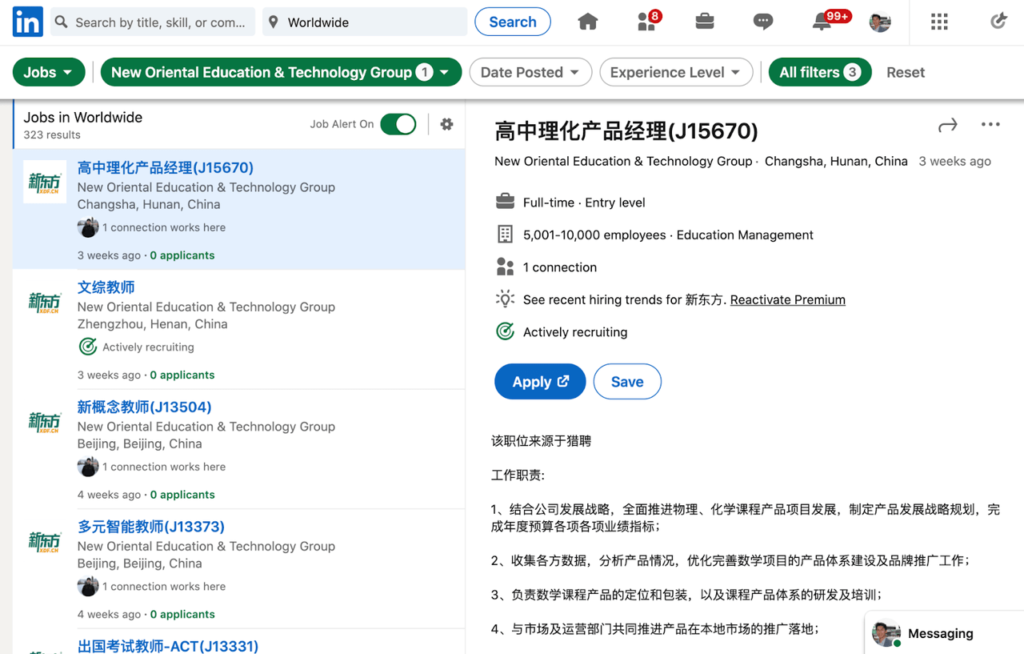 This is interesting because this implies that New Oriental company is trying to focus more on its overseas test prep business for university admissions and also certification exams like the CELTA. For now, it appears that these are the areas that New Oriental will most likely focus on in the near term since it cannot operate classes K9 at a profit.

Going onto New Oriental’s peer TAL’s LinkedIn Job postings were even more interesting to give me clues on where they’re trying to pivot next. TAL seems to be hiring in roles that might serve the non-academic tutoring market as there are now open jobs in English Drama instructors.

In addition, I saw that TAL was hiring for learning partner consultants to assist in expanding their classes in Singapore. This implies that EDU and TAL might not only focus on the China market in the future and attempt to compete in the education space in broader Asia. 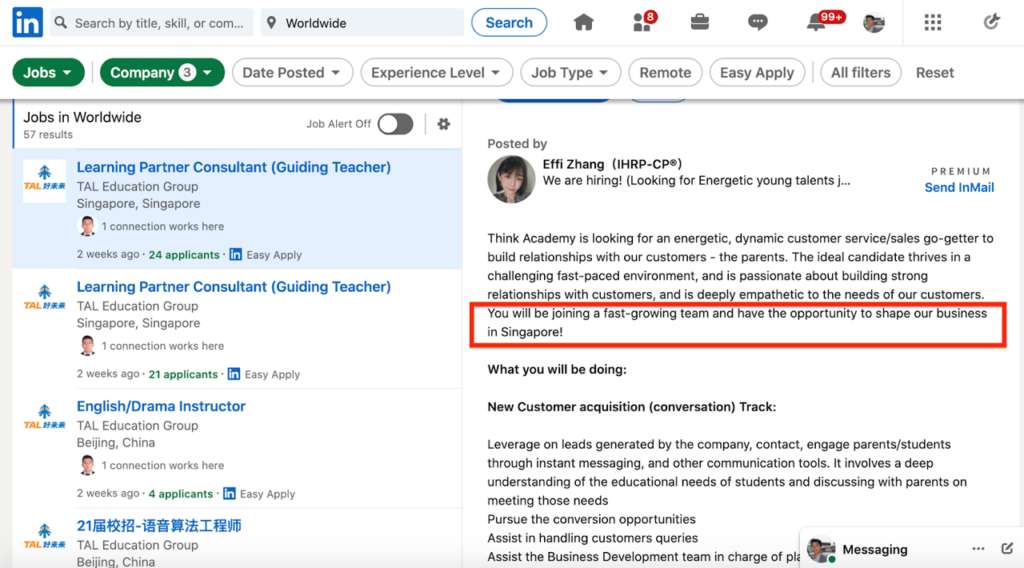 The estimated size of Singapore’s tuition market is around $1.2B annually, and although this market size is a lot smaller than China’s, it can allow EDU and TAL to build out their broader Asia education portfolio while awaiting any further clarity on the current policy regime.

The key thing to note is that New Oriental and TAL are still hiring. Almost 90% of All the other companies that are tutoring providers now have liquidity issues. GoGoKid, which is the education subsidiary of ByteDance, had decided to shut down its operations.

The recent new hiring posts from these two market leaders means that they are not completely capitulating on the current environment. EDU has $1.5 billion USD of cash on their balance sheets with a total of $6 billion of cash, cash equivalents, and short-term investments. Meanwhile, its peer TAL Education has $5.9 billion of cash, cash equivalents, and short-term investments. I believe these two companies have enough cash to survive this bear market, and in the case of any policy lightening, these two companies will emerge even stronger because they were among the only companies left after this industry disruption.

If it turns out that EDU and TAL are among the few educational companies that will survive this industry disruption, they will emerge more powerful, more diversified, and more ready to take nearly market leading status once the dust settles. For now, all eyes are on their pivot strategy which seems to be in motion according to the latest job openings on LinkedIn.