JD.com: Don’t Wait Any Longer To Add This E-Commerce Giant 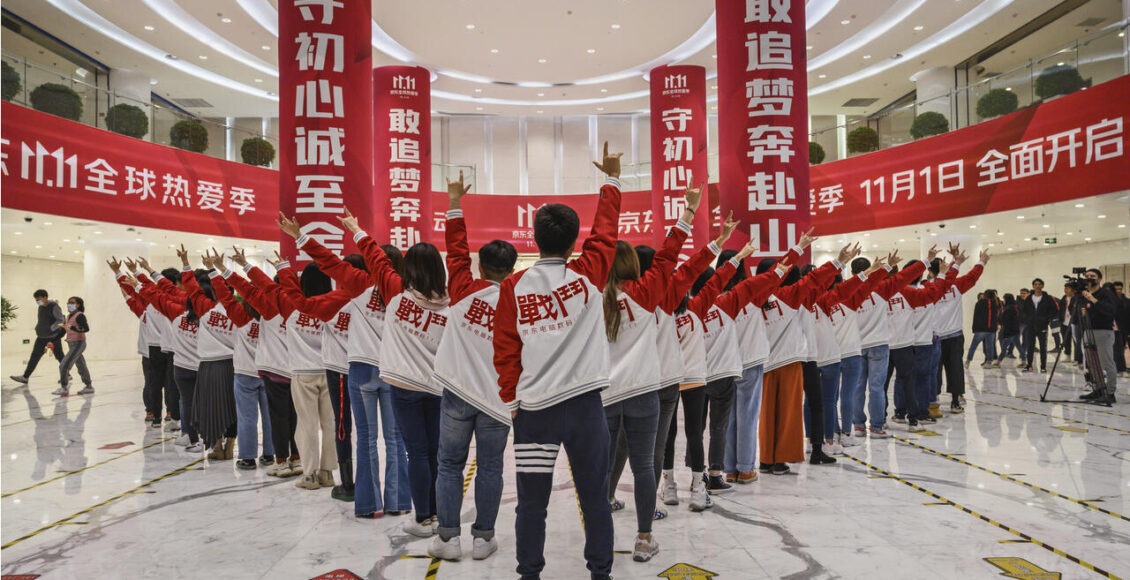 Jingdong (JD) is China’s largest 1P e-commerce marketplace that has somehow managed to stay out of the spotlight recently, as the regulatory crackdown continued to intensify across multiple sectors in China, from ride-hailing to real estate, to food delivery, to vaping, and of course, gaming where Tencent (TCEHY) came directly into the regulators’ crosshairs, having the distinction as the world’s (not just China) largest gaming company, that saw the gaming giant promptly responding with its own “self-governance” (link in Chinese) measures to restrict further gaming hours of young gamers that’s even more stringent than what the regulators had previously required, including considering an outright ban of gamers under the age of 12.

We think the initiative taken by Tencent sets a laudable example for large companies in China to emulate in embracing the Communist Party of China’s ((CPC)) policy directives with a clear understanding of their strategic intent, which includes suggestions that could ameliorate the policymakers’ effectiveness in the implementation of their policies.

Therefore we think the “million-dollar question” in investors’ minds right now is where JD stands amid the recent regulatory actions and what should investors in JD consider to successfully navigate the current landscape of increasingly frequent regulatory oversight.

The Complicated Relationship Between JD and Alibaba 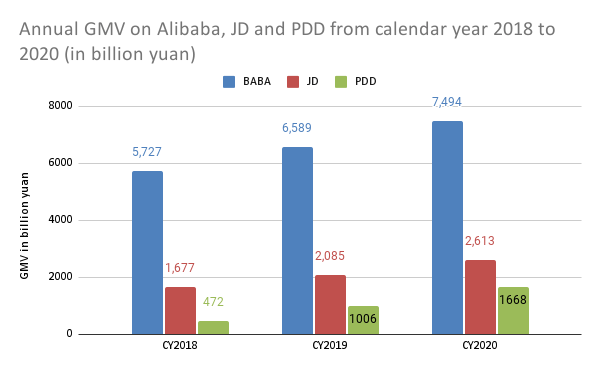 In our opinion, due to Alibaba’s (BABA) dominance with its e-commerce ecosystem where it’s the undisputed GMV market leader by a mile ahead of JD.com, may have fortuitously allowed JD to avoid the regulators’ attention for now.

It should be clear that BABA was often previously been portrayed as the “anti-competitive aggressor” against the smaller Jingdong, where the initial antitrust probe against Alibaba was focused on: BABA’s “practice of forcing merchants to ‘pick a side,’ or Er-Xuan-Yi meaning working with exclusively Alibaba and shunning the platform’s rivals,” including JD’s platform.

JD’s past feuds with Alibaba have been unpleasant as BABA avowedly “[used] its market dominance to force merchants to terminate partnerships with JD.”

JD had also made clear their unhappiness of Alibaba’s “anti-competitive” behavior as it emphasized: “Big platform operators like Alibaba can easily punish merchants that don’t cooperate by reducing new traffic to their sites or downplaying them in searches. It also makes merchants hesitant to stand up to the platforms in lawsuits.”

Therefore, we think JD’s status as the smaller competitor to Alibaba may have largely shielded the company from the regulators’ spotlight, even though the company was fined in May this year for “violating the antitrust law,” as the company was penalized for “distributing false promotional information in promoting its food products,” a violation that JD has repeatedly committed as Global Times reported that “the company has received seven fines from [the State Administration for Market Regulation] ((SAMR)), ranging from 60,000 yuan (equivalent to about $9.3K) to 400,000 yuan (equivalent to about $62K)” in 2021. If we compare the total amount of JD’s penalties to the $2.8B “Administrative Penalty” that Alibaba swallowed in Q1’21, it certainly pales in comparison, and looked more like a slap on the wrist. 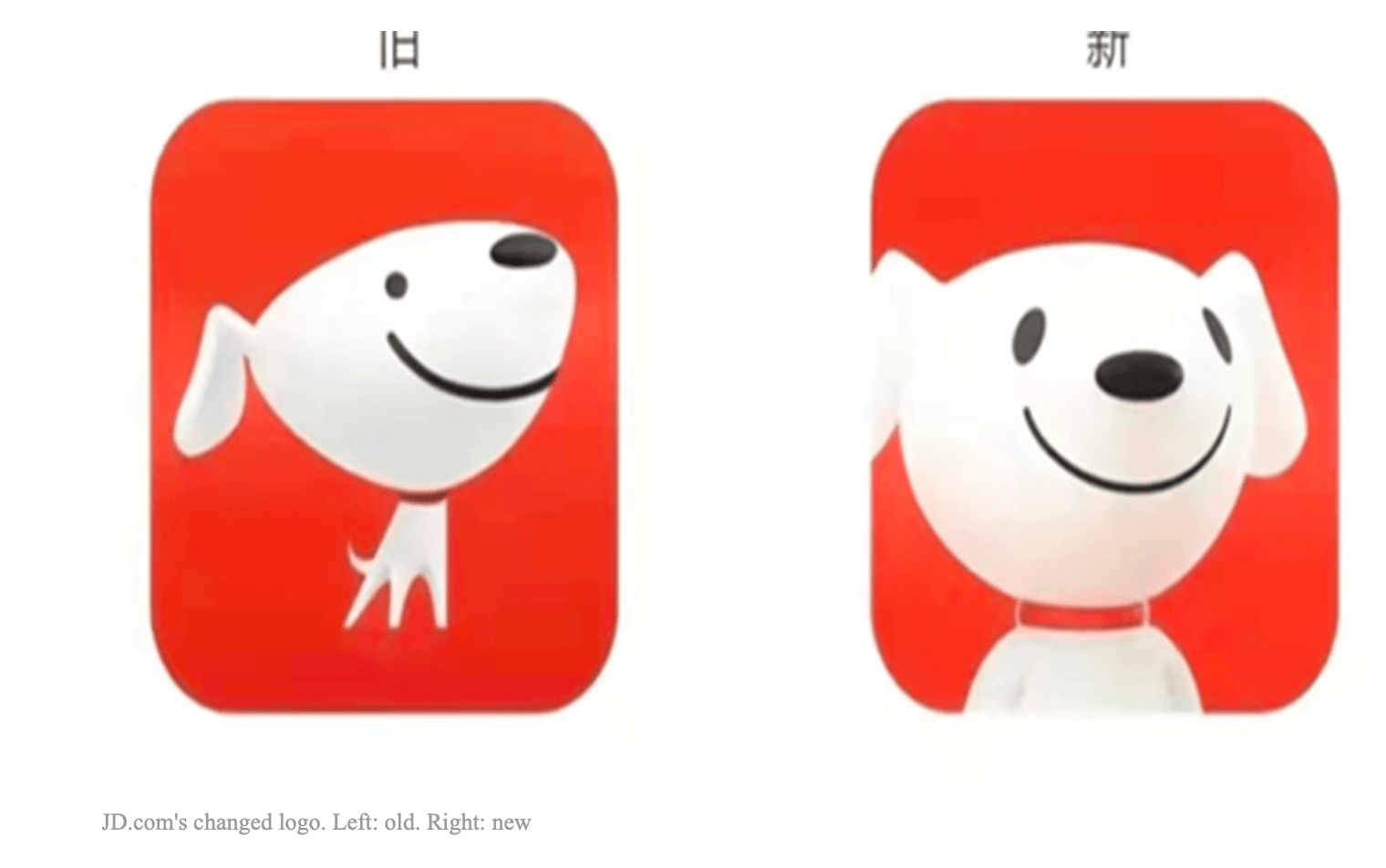 However, that doesn’t mean that Jingdong is unaware of its sizeable market position within the Chinese e-commerce ecosystem, and is ignorant of China’s anti-trust readjustments.

Just last month, JD announced that the company would be gradually raising its employees’ (link in Chinese) annual income from 14 months to 16 months over the next 2 years, by July 23, that Global Times said highlighted attempts by companies to “retain talent and recover their reputation as a responsible and caring enterprise.”

JD’s timely announcement came ahead of the recent crackdown on Meituan (MPNGY) where the Chinese government rebuked for paying their workers too little and ordered Meituan to avoid “[setting] evaluation criteria based on optimization algorithms, respect the rights of delivery drivers and ensure that workers earn at least the local minimum income with social insurance.”

These developments are highly expected, following an article that was published previously in the People’s Political Consultative Daily where it emphasized that “the sprawling platform economy in China should be reined in to prevent it from exploiting surplus labor and its high surplus value endlessly.”

Recently, the Chinese media even pointed out that Jingdong even recently made a subtle change in its logo for its app, where “the dog mascot on the JD.com app logo is taking a simpler form with a wider smile on its face, making the logo more amicable and acceptable.”

While we are certainly not reading too much into the tea leaves regarding its logo change, we are confident that JD remains ahead of the regulatory curve so far, as the company seems to be actively reviewing its corporate structure and best practices to comply with and support the readjustments required by the regulators. There are, however, no guarantees as to whether or when JD may be the next in line to fall within the crosshairs of China’s regulators, as the readjustments are still actively evolving, and are expected to continue taking centerstage moving ahead.

These Anti-trusts Readjustments are Highly Necessary

Businesses like JD who commands a highly important influence in China’s e-commerce ecosystem are likely to remain within reach of the regulators’ long arm in the current environment, and therefore must continue to self-reflect on its corporate governance, correct its monopolistic behavior, and invest in areas that help to promote healthy competition before the regulators come down hard on them for ignoring the privilege of time given for these Tech behemoths to conduct their own self-reflection.

Global Times republished an article in early July that clearly highlighted that China’s regulatory actions are not going to be a one-off event that started with Alibaba last year, and would be transformative and highly impactful across the entire Chinese economy, reminding big companies not to “think that the storm will pass and they can go back to business as usual and bet against China’s resolve to protect its market, consumers as well as national security.”

Importantly, investors should be reminded that cracking down on “monopolistic behavior and unfair competitions throughout the internet sector” is well within the plans laid out in China’s highly strategic 14th Five-Year Plan ((FYP)), and will be overarching in its scope to rectify these “wrongful” behaviors that the Chinese government views as highly detrimental to the country’s long term health.

What about JD’s Darkest Secrets?

One pressing area that we think would be critical for JD.com to pay attention to is in the area of false advertising, where “online vendors on the platforms were found committing illegal activities such as faking traffic flows or portraying transactions in such a way as to give consumers the wrong impression about the popularity of various products.”

This is a persistent problem on both Jingdong’s and Alibaba’s platform that the regulators have vowed to eradicate as they emphasized: “Fraudulent orders and deliveries will be the next focus of the authorities to crack down on illegal activities online.” 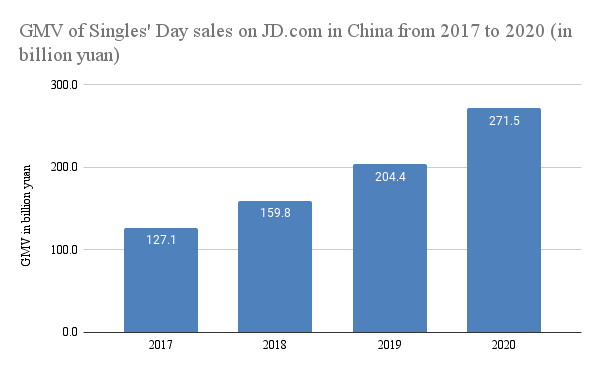 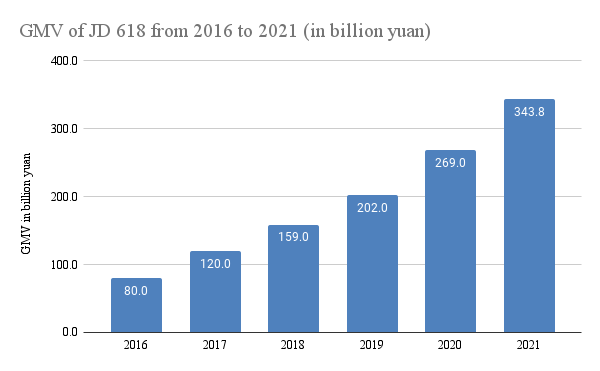 It’s no secret that Alibaba and Jingdong depend heavily on the year-end Singles’ Day and the mid-year 618 shopping festival to drive huge GMVs that saw rapidly increasing transaction volumes every year.

For JD, its GMV in Singles’ Day and the JD 618 event increased at an impressive CAGR of 20.9% and 30.1%, respectively. The 2020 GMV from JD 618 and the Singles Day event collectively accounted for about 540.5B yuan of JD’s 2020 total GMV of 2,613B yuan or about 20.7% of the total GMV, clearly demonstrating the critical importance of these 2 events in the company’s annual retail calendar.

However, as these events have become increasingly competitive in the e-commerce marketplaces, vendors have increasingly resorted to a process called “Brushing,” which is aimed at fraudulently increasing a store’s or product’s ranking in the search results by artificially inflating sales or posting untrue or misleading reviews. One Taobao vendor has even went as far lamenting that: “For online vendors, brushing is no longer a questionable business practice, but rather an essential tactic in an increasingly tough business environment.”

While companies like JD and Alibaba is said to have “sophisticated algorithms” to help them to detect and eradicate these problems, some JD vendors said that during the Singles’ Day or 618 event, marketplaces like JD often “turn a blind eye” as they “have been approached by the site’s operation team, which asked them to ‘do their best’ to rack up sales so the marketplace can hit new highs in transaction volume.”

Therefore, we think it’s high time that the regulators come down hard on platforms like JD and Alibaba to set the record straight that they do not condone such highly unethical and illegal practices. It would be tough for either platform, whether Alibaba or JD to take the lead in this as no one wants to lose that substantial GMV to each other, and it may be necessary for the regulators to issue certain “rectification” orders to compel these e-commerce giants to either shape up or ship out, and there should be no compromise to eradicating these illicit behaviors.

Therefore, we think the initiative by Tencent and Alibaba to work together to open up their walled gardens to each other is a highly constructive move that would very likely also benefit Jingdong to a large extent. BABA’s comment in their recent earnings that alluded to this was also highly encouraging as the company added:

Our view on connectivity has been consistent and extremely clear. We believe that connectivity is a core value of the Internet, and we also believe that openness is a fundamental and should be a fundamental characteristic of the digital economy. When you can achieve circulation of users of information, of data not only within but across and among different platforms, that certainly will be conducive to realizing greater social value to a greater extent than the smaller circulation that can only be achieved within the same platform. So we do see cross-platform openness and connectivity as a positive trend that could unlock greater dividends in the Internet era. 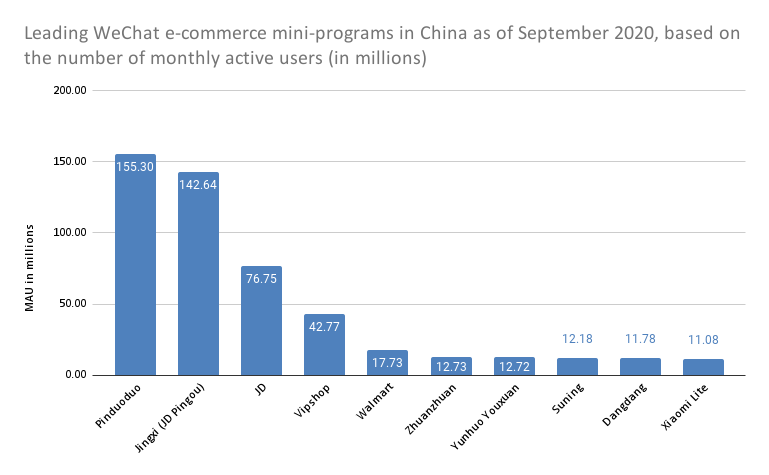 We had previously highlighted that Tencent’s WeChat Mini programs are a formidable platform that taps on WeChat’s ecosystem to compete with Alibaba’s walled garden, especially for Pinduoduo (PDD) and JD.com. Investors should easily glean that JD’s combined MAU in WeChat’s mini programs put the company right at the leading edge with a total of 219M MAU as of Sep 20, well ahead of PDD and the other retailers.

Therefore, while JD was not explicitly mentioned in this discussion, investors should not forget that JD’s leadership in the Mini programs would likely see the company be able to capitalize on leveraging Alibaba’s ecosystem further, and perhaps reducing its reliance on vital events like Singles’ Day and 618 to drive GMV growth. 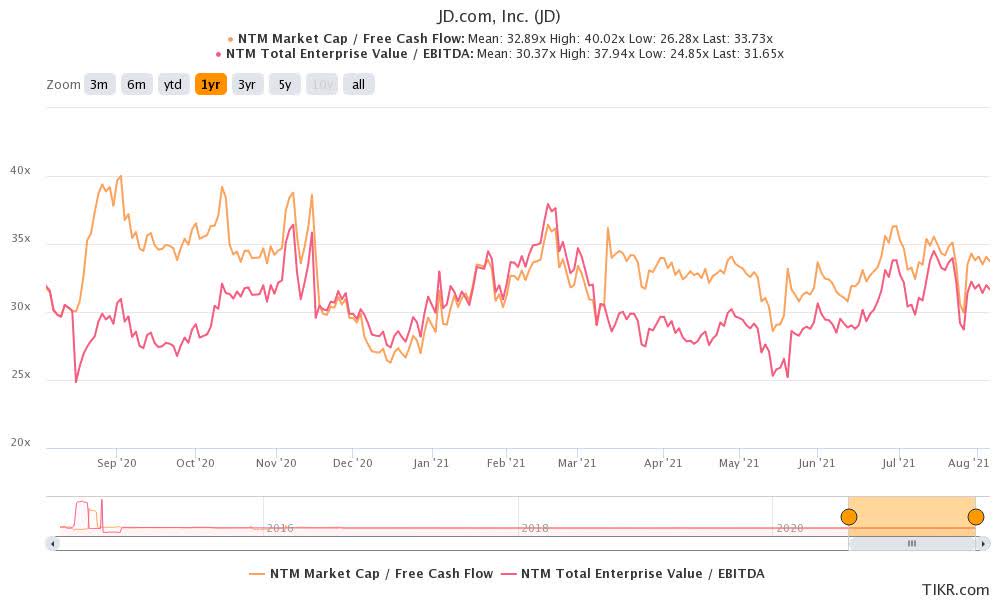 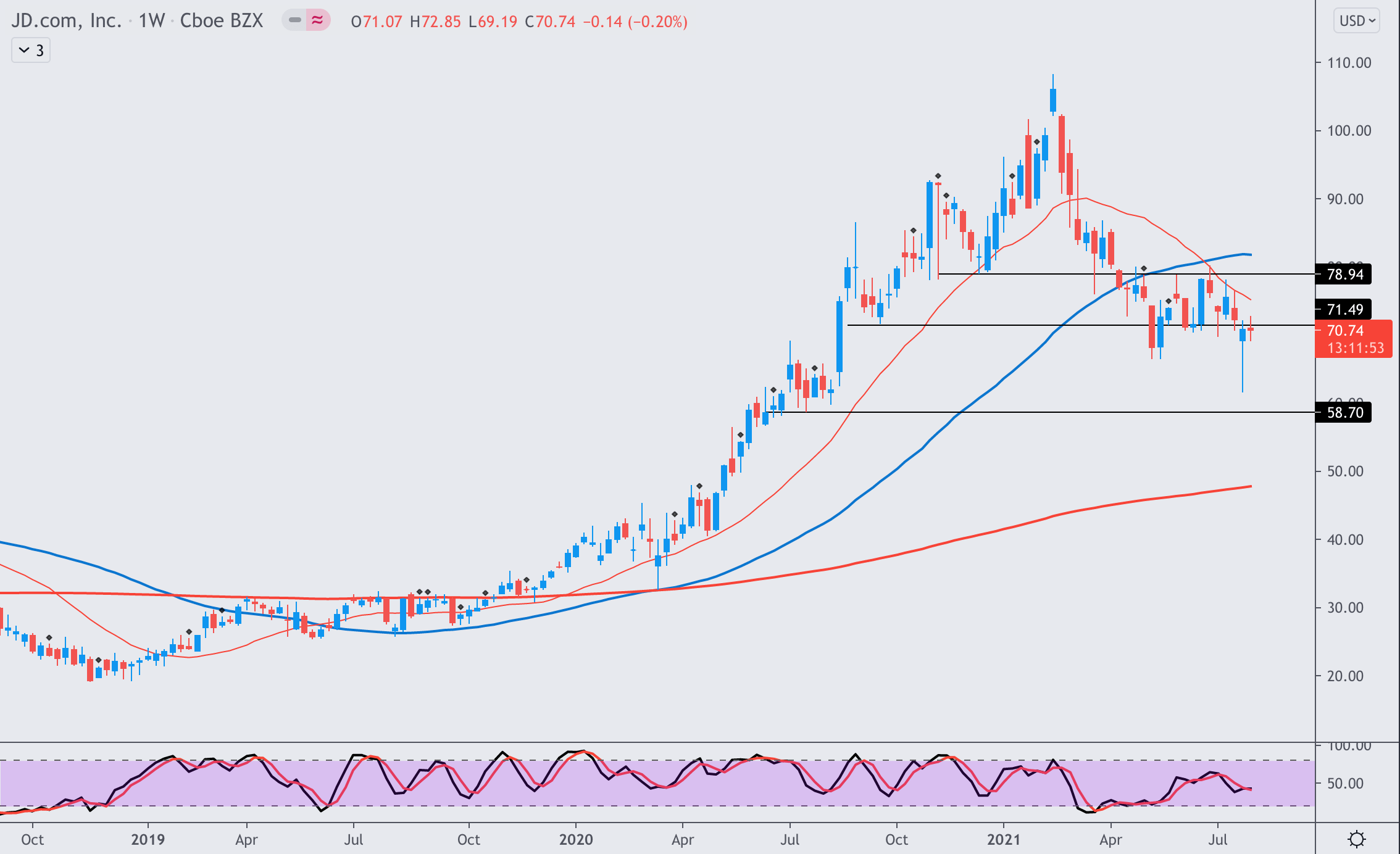 The recent indiscriminate selling (that we discussed in a recent article on Alibaba) that especially affected Chinese Internet stocks has also brought JD back to its Sep 20 lows.

Interestingly, this seems to be a level that the bulls have demonstrated that they were keen to defend very strongly and would absorb the kitchen sink that the bears may throw at them, as these sellers bail out of JD. We can clearly observe the price level of $70 as the key support level that is likely to continue attracting strong buying interest, while the $58 level would unlikely be breached as of now.

One bugbear on the price action remains as JD seems to have significant difficulty overcoming the resistance level at $80, and perhaps with the current weak momentum and negative sentiments affecting Chinese Internet stocks, investors should expect JD to be trading within the range of $70 to $80 in the near term.

This also places JD attractively within its 3Y mean for both its EV / Fwd FCF and EV / Fwd EBITDA, giving investors a great opportunity to take advantage of the $70 key support level to add shares to right now.

JD.com stops selling 86 games from Call of Duty to Super Mario Maker 2 on its online…