HSBC, Union Bancaire side with China stock signals on downside while Dalio tells sceptics not to be scared after US$1.2 trillion sell-off

Chinese stocks in the mainland and Hong Kong markets cratered last week, wiping out US$1.2 trillion in market value along the way in July, as regulatory clampdowns struck fears into free-market believers.

The slump, the biggest shakeout in more than five years, handed investors a reminder about a market built on “Confucian hardware and Soviet software” as described by hedge fund giant Bridgewater Associates. Its founder Ray Dalio, a China optimist, told sceptics not to be scared by the latest regulatory lashing and to focus on the nation‘s decades-long market-friendly reforms.

Wealth managers at HSBC and Union Bancaire Privee, watching the size and speed of the market rout, are instead listening to the market history by predicting more downside to stocks until some semblance of policy clarity is restored.

“The regulatory changes entail further downside pressures in the short-term, as investors reprice these uncertainties,” said Carlos Casanova, senior economist at UBP, a Swiss private bank with US$178 billion in assets under management. The housing sector and other dominant “new economy” operators could be the next targets, he said in a report last week.

Onshore stocks suffered a US$434 billion beating in July while those in Hong Kong slumped US$752 billion, according to Bloomberg data. That is the most since a US$2.4 billion plunge on a combined basis in January 2016, despite reassurances from officials and state-run media.

Even after a 7.9 per cent loss in July, China’s biggest stocks in Shanghai and Shenzhen represented in the CSI 300 Index are trading at least 40 per cent above their levels in the sell-offs in 2015 and 2018, according to Bloomberg data.

They are also the most expensive in a month vs members of the MSCI World Index at 17 times earnings. The valuation reached a low of 12.1 times after the US$5 trillion market meltdown in 2015, and 11.3 times in the bear market in 2018 sparked by the US-China trade war.

Besides, the onshore market’s bottoms are typically characterised by fast-shrinking trading volumes and difficulty in mutual-fund sales, none of which has played out so far. Stock prices have also not fallen far enough for earnings yields to rise and match those offered by the safest government bonds.

“In the short-term, the regulatory uncertainty makes it difficult to predict how events might pan out,” said Xian Chan, chief investment officer for wealth management at HSBC, which manages some US$400 billion of clients’ assets. “What we know is that the so-called risk premium has increased for Chinese equities,” he said in a report on July 28.

Chan does not think investor sentiment can improve significantly over the coming three to six months, saying it’s prudent to downgrade Chinese equities to neutral on a tactical basis. “It’s still too early to go bottom-fishing.”

More importantly, China’s top policymakers remain unrelenting in their campaign against the fast-growing industries deemed to be wielding excessive influence over the broader economy. Their failure to more clearly communicate the reasoning to the investing public is “unfortunate”, Dalio said in a July 30 post on LinkedIn.

Bridgewater, founded by Dalio in 1975, is the world’s largest hedge fund with US$223 billion of assets, according to filings. It had US$5.44 billion under its All Weather China strategy.

While NIO has gained US$11.9 billion in market value since then, the other five companies have lost a combined US$167 billion over the four-month period, according to Bloomberg data.

“In this rapidly developing capital markets environment, Chinese regulators are figuring out appropriate regulations so, when they are changing fast and aren’t clear, that causes these sorts of confusions, which can be misconstrued to be anti-capitalist moves,” Dalio said.
“I urge you to not misinterpret these sorts of moves as reversals of the trends that have existed for the last several decades and let that scare you away.”

That message may be for investors who fled to the comfort of bonds during the slump. The flight to safety compressed the yield on 10-year Chinese government bond to a one-year low of 2.874 per cent last week. 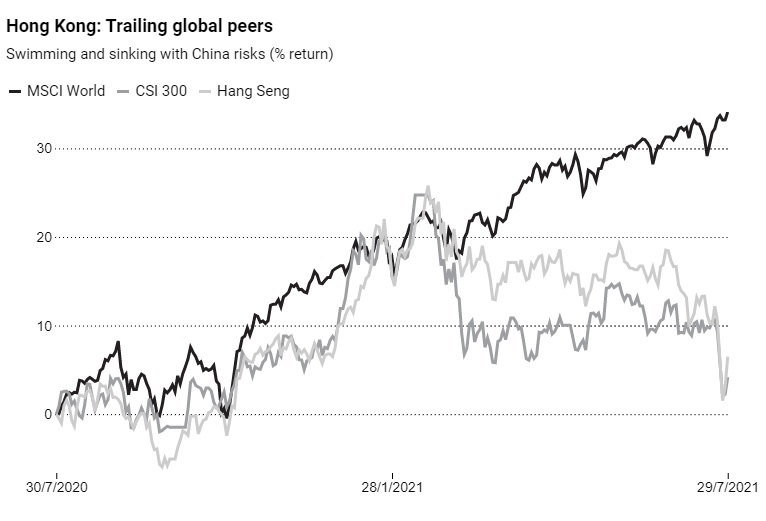 Citic Securities, China’s biggest publicly traded brokerage, says that the risk stemming from the regulatory scrutiny will linger for a while and it will trigger redemptions or forced liquidation of stock holdings.

With Beijing seeking to improve the livelihood and reduce the cost of living for the population, the health care industry will probably face strong headwinds as well, given public complaints about high drug prices, according to GF Securities and China Galaxy Securities.

“Looking forward, the roll-out of regulatory policies may become a new norm,” said Zeng Wanping, an analyst at China Galaxy Securities. “There’s no rush to buy on dips. Let’s wait for the risks to be fully unfolded and assessed.”

After online tutoring, why is China cracking down on private…

Alibaba Is Poised To Keep Falling Deeper Until Xi Jinping Is…