The one-year loan prime rate was cut by 10 basis points to 3.7% on Thursday, in line with forecasts in a Bloomberg survey of economists. The five-year rate, a reference for long-term loans including mortgages, was lowered by 5 basis points to 4.6%, a smaller reduction than predicted. 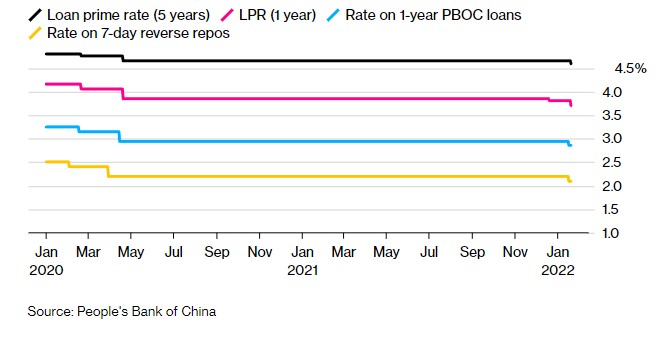 The LPRs, which are the de facto benchmark lending rates, are based on quotes that 18 banks offer their best customers and are submitted to the People’s Bank of China. The one-year rate usually moves in lockstep with the one-year medium-term lending facility rate, which the PBOC cut by 10 basis points Monday, the first reduction in almost two years.

A crackdown on the property market last year has roiled the economy and financial markets, prompting the central bank to pivot to easing mode, with interest rate cuts and pledges to open its policy tool box wider. The smaller-than-expected cut in the five-year loan rate suggests authorities are still cautious about the property market.

“A smaller cut, in my opinion, signals that policy makers are in no rush to relax measures on property financing,” said Hao Zhou, senior emerging market economist at Commerzbank AG. “The property policy is still under spotlight for now, and some hesitation from the policy makers indicates that the debt concerns are still clouding.”

The PBOC is just getting going – we see further policy rate cuts pushing down borrowing costs this year as the authorities move to counter a slowdown in growth and restore some stability to the swooning property sector.

The smaller drop in the five-year LPR relative to the one-year LPR over the past two months may reflect the authorities’ intention to avoid inflating housing prices.

Yields on China’s 10-year sovereign bonds fell 1 basis point to 2.73%, extending this week’s declines slightly as easing bets pushed yields down to the lowest levels since May 2020. Property developers and companies related to the real-estate sector, such as home appliance makers, were among the top gainers in China’s benchmark CSI 300 Index, which rose as much as 1%. A Bloomberg gauge of Chinese builders jumped as much as 3.7% in early morning trading.

The one-year LPR was lowered by 5 basis points in December, after the central bank reduced the amount of cash banks must hold in reserve to boost liquidity, driving funding costs down.

Economists expect the PBOC to cut interest rates further and reduce the reserve requirement ratio in the coming months, as officials pledged early actions to arrest a rapid growth slowdown.

“We expect additional easing measures to follow in the coming months but policymakers still appear reluctant to engineer a sharp pick-up in credit growth,” Sheana Yue, China economist at Capital Economics Ltd., wrote in a note Thursday. Yue expects the one-year LPR to be cut by another 20 basis points in the first half of this year.

Iris Pang, chief economist for Greater China at ING Bank NV, expects more rate cuts in March after the annual legislative sessions, if the Covid outbreaks continue to spread across the nation.

Sheng Songcheng, a former director of the statistics and analysis department at the PBOC, said the central bank only has a few months to ease monetary policy, before inflation trends higher in the second half of the year and interest rate hikes in the U.S. put pressure on the yuan.

China and Germany should work together in green, digital…