Representatives of the company, backed by Softbank Group’s Vision Fund and Tencent Holdings, got a shock during their two-week premarketing campaign, when they had hopes of swinging a $100 billion valuation similar to that of global rival Uber Technologies.

They met such strong resistance that the company decided to settle on a valuation of up to $67 billion — just above the level set in a 2018 fundraising. Didi also recalibrated the fundraising target to $4 billion, less than half its initial target, according to three people familiar with the transaction.

The company, which makes its debut on Wednesday, priced the IPO at $14 a share and could sell more shares than originally offered, a person familiar with the deal said. A source close to the company said it had not gone into the investor meets with a predetermined valuation expectation. A representative for Didi in Hong Kong declined to comment on the valuation.

A more sober valuation should help to generate a tailwind for Didi, whose initial public offering is one of the biggest by a Chinese company in New York, after Alibaba Holding’s $25 billion fundraising in 2014. Online grocer Dingdong eked out a tiny gain in its debut on Tuesday after slashing the size of its initial public offering on the New York Stock Exchange to almost a quarter of what it had aimed for earlier and pricing the shares at the lower end of the marketed range. Rival Missfresh has lost a third of its value since the share sale. It listed on Friday. 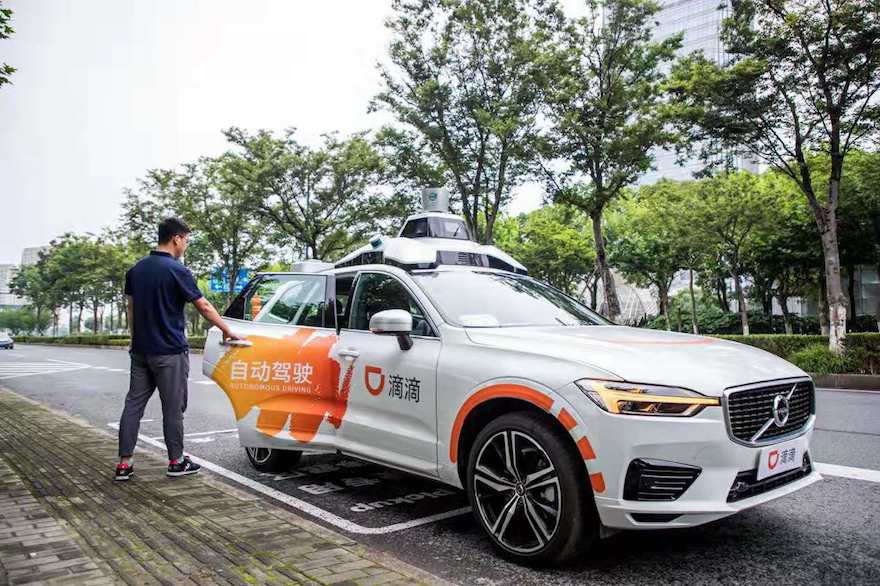 But Didi still needs to show it can overcome plenty of longer-term strategic concerns.

While fund managers acknowledged Didi’s potential, they are concerned that the company — which has a 90% share of China’s ride-hailing market — still does not make a profit at the net level in the business.

Mounting competition from the likes of Uber and Lyft globally, and Meituan locally means the prospects for profit in its international and other businesses, such as food delivery, bike sharing and autonomous driving, are far from certain.

Two parts of the business — international and robotaxi development — are like a “vacuum cleaner” in the way they suck up capital, said Le Tu a managing director at Beijing-based Sino Auto Insights.

“Some of these international markets have incumbents like Uber, Bolt, and Grab, just to name a few, that won’t concede market share very easily, so that could get very expensive,” Tu said. “Their scale in China doesn’t help them much outside of it.”

Didi plans to use a majority of its IPO proceeds to support its cash-guzzling businesses. Almost a third of the proceeds have been earmarked to enhance technology in areas such as electric vehicle and autonomous driving technologies and another third to grow its international presence.

“Those factors became a sticking point in the discussions,” said one person involved in the investor meetings. “Investors were not convinced with our theory that the new businesses are a future gold mine for Didi. The other businesses in China and international operations still generate big losses but are core to build the ecosystem.”

Expenses will likely “increase in the future as we develop and launch new offerings and technologies [and] expand in existing and new markets,” the company said in its prospectus. “These efforts may be more costly than we expect. Any failure to increase our revenues sufficiently to keep pace with our investments and other expenses could prevent us from achieving or maintaining profitability.”

The company offered 288 million American depositary shares for $13 to $14 a piece, according to a filing last week with the U.S. Securities and Exchange Commission.

That would give it a market valuation of $62 billion to $67 billion compared with $95.7 billion for Uber and $20 billion for Lyft. Uber lost a bruising price war in China to Didi and in 2016 offloaded the business to its rival in return for a 12.8% stake in the Chinese company.

Such a market capitalization would equate to a valuation of about 9 times platform sales, which is comparable with market pricing for its two global rivals. However revenues at Uber, which is also loss-making, are seen by analysts as gaining from the surge in its food delivery business, Uber Eats.

Didi, founded in 2012 by Cheng Wei and Jean Liu operates in 15 countries and serves more than 493 million annual active users on its global platform, according to its filing. Last year it reported a net loss of $1.6 billion.

In the first three months of this year Didi logged a loss from operations of $1 billion, though investment returns helped it to post net income of $837 million.

China remains the company’s main revenue driver and Didi’s China ride-hailing business has returned an profit before interest, tax and amortization since 2019.

Meanwhile, Didi is also embroiled in a regulatory crackdown on technology companies in China, which imposed a record 18.2 billion yuan fine on Alibaba. In March, Didi was fined 1.5 million yuan for “improper pricing behaviors.”

Reuters this month reported that China’s antitrust regulator was probing whether Didi used anticompetitive practices to squeeze out smaller rivals, and whether its pricing mechanism was transparent enough.

In its IPO application, Didi said it was among more than 30 Chinese internet companies that met with regulators in April and asked to conduct internal inspections and submit compliance reports. Didi said it has already done so.

“It is worth remembering that there is always outsized political risk in China, as the Chinese Communist Party can pretty much do whatever it wants to any company, as the Ant Group disaster clearly demonstrated,” Richard Windsor, an IT analyst and founder at Radio Free Mobile said referring to the last minute suspension of Ant Group’s almost $40 billion IPO in November.

Timeline: how Didi went from poster child for China tech to cautionary tale of the…

China to end regulatory storm over Big Tech and give sector…