Some China Evergrande Group bondholders received an overdue interest payment shortly before the expiry of a grace period, buying more time for the debt-stricken property developer as it tries to raise cash through asset sales.

Certain holders of the 9.5% dollar note maturing in 2024 received notification they had been paid on Thursday, according to people with knowledge of the situation, who asked not to be identified discussing private payments. Evergrande skipped an interest payment due Sept. 29, starting the clock on a 30-day grace period before investors could declare a default. It’s the second time this month that the debt-stricken property developer avoided default.

The latest payment to international bondholders comes amid a selloff in Chinese junk bonds that was paced on Thursday by Kaisa Group Holdings Ltd., one of the property sector’s largest issuers of dollar debt.

Evergrande pulled back from the brink of default last week by meeting another delayed coupon before that grace period ended. While that payment surprised some investors, the firm’s dollar notes remain at distressed levels as creditors brace for an eventual debt restructuring that could rank among the largest ever in China. 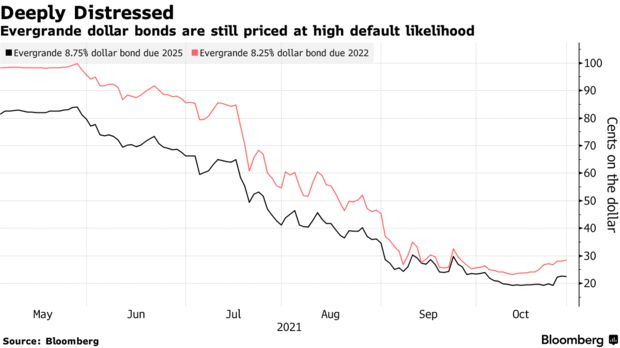 Advisers to Evergrande and its bondholders earlier this week signed non-disclosure agreements in preparation for potential talks about managing developer’s debt load, Bloomberg earlier reported. The ad hoc bondholder group’s advisers are seeking to exchange information with the company in what’s often a first step toward negotiations for an overall restructuring deal.

The payment, earlier reported by The New York Times, buys more time for Evergrande as it tries to raise funds through asset sales. Chinese authorities have already begun laying the groundwork for a potential restructuring, assembling accounting and legal experts to examine the finances of the group.

Authorities have told Evergrande’s billionaire founder Hui Ka Yan to use his personal wealth to alleviate the property giant’s debt woes. The directive adds to signs that Beijing is reluctant to orchestrate a government rescue even as crisis spreads to other developers, sours sentiment in the real estate market and threatens to roil the world’s second-largest economy. A top Chinese regulator this week called on companies to make “active preparations” to meet payments on their offshore bonds

The loan that a Hui home in Hong Kong is pledged as collateral will be used to pay a $260 million bond that Evergrande has guaranteed, reported HKO1 on Friday.