A worsening crisis in China’s real estate sector is dragging industry shares to the lowest in almost five months, with home sales slumping further and setbacks spreading at the nation’s most indebted developer.

A Bloomberg Intelligence index of developer stocks dropped as much as 2.3% to the lowest level since March 16. Guangzhou R&F Properties Co. and Country Garden Holdings Co. led the declines, each losing at least 6%. 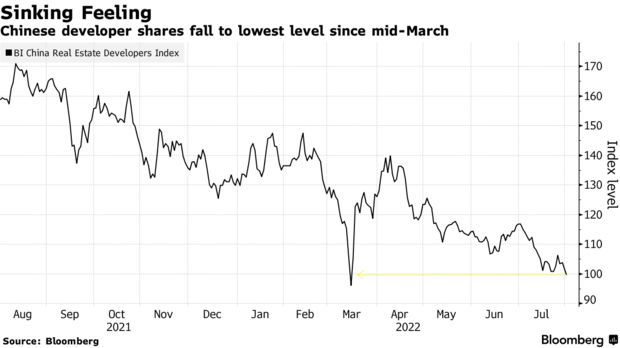 The industry’s outlook turned darker after data showed home sales in the country extended a plunge amid a widening mortgage boycott, while China Evergrande Group failed to unveil a long-promised restructuring framework on time. Investor confidence also weakened on news of a plan mulled by authorities to seize distressed developers’ idle land to help complete stalled projects, a move that could cost creditors access to some of builders’ most valuable assets.

“Recent developments show that it’s almost impossible for defaulted developers to make a turn-around,” said Li Kai, founding partner of Beijing Shengao Fund Management Co. “More restructurings are in sight. The reality is that developers will have to accept huge discounts in asset disposal, which implies lower recovery ratio for creditors.”

China’s junk dollar bonds, dominated by notes of developers, were little changed Monday morning, according to credit traders. Total returns for these notes fell 7.9% in July, the biggest loss since February and a record-extending 11th-straight drop, according to a Bloomberg index.

The latest weakness in developer stocks followed fresh signs of trouble in China’s property sector and its broader economy. Combined contract sales by the country’s top 100 developers fell 39.7% on year in July, according to preliminary data compiled by China Real Estate Information Corp. Factory activity in the world’s No. 2 economy also unexpectedly contracted last month, highlighting the fragility of a recovery amid sporadic Covid outbreaks.

Also weighing on investor mood is news that China is considering a plan to seize undeveloped land from distressed real estate companies and use it to help finance the completion of stalled housing projects. While the initiative would help appease angry buyers of unfinished homes, it may potentially remove a key source of assets for creditors seeking to limit losses during a debt restructuring.

In the latest indication of the protracted nature of debt overhauls in China, Evergrande failed to deliver a ‘preliminary restructuring plan’ it had promised by the end of July and instead pledged to announce a specific one within this year.

At the epicenter of the sector’s debt crisis, Evergrande also said separately that a unit will need to sell shares in a regional bank after losing an arbitration ruling.

“Generally, the delay in announcing a detailed plan is disappointing, though unfortunately investors have few options other than to wait,” said Shu Hui Woon, credit analyst at Lucror Analytics. “There could be more winding-up petitions if Evergrande drags the process further.”