For any government, overhauling a nationwide residential real estate market would be risky under the best of circumstances. Chinese President Xi Jinping is attempting it at a time when the economy is slowing, omicron is threatening his zero-Covid policy and relations with the outside world are increasingly fraught.

As that perilous combination takes a growing toll on Chinese financial markets, one question keeps popping up: What is Xi’s endgame?

Given the Communist Party’s opacity and its history of backtracking on property reforms, the answer is impossible to know for sure. But China watchers have begun sketching out a likely future for the real estate market that looks far different from its more than two-decade run of supercharging economic growth, household wealth and government revenue.

In short, the days of blistering home-price gains and debt-fueled building sprees by billionaire property tycoons are set to fade. They’ll be replaced by a much more staid market where authorities are quick to clamp down on speculative frenzies and development is dominated by state-run companies earning utility-like returns.

“If we call the past decade a golden age for the real estate industry, it is now trapped in the age of rust,” said Li Kai, Beijing-based founding partner of bond fund Shengao Investment, which specializes in distressed debt. 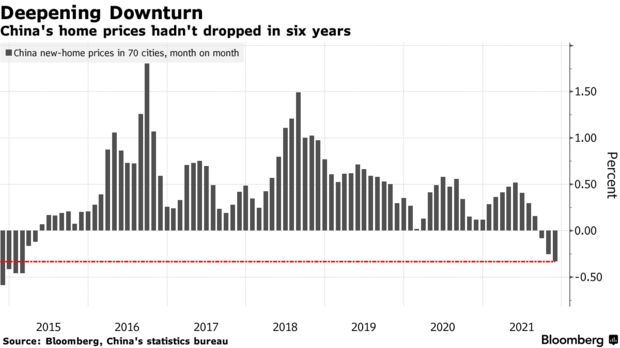 That transition promises to be especially painful for privately owned developers like China Evergrande Group that have already saddled international stock and credit investors with billions of dollars in losses. At the same time, it could go a long way toward achieving two of Xi’s most prized goals: a more stable Chinese financial system and a narrower gap between the country’s rich and poor.

Xi’s challenge is to pull off the transformation without sparking a crisis on the eve of a leadership confab widely expected to cement his rule for life.

While few analysts are predicting an imminent financial meltdown, risks from the real estate market are growing. Weaker property companies are under immense stress, hit by a double whammy of punishingly high borrowing costs and slumping sales. Lower-rated developers including Evergrande are already defaulting on dollar debt at record rates and contagion is spreading to stronger companies. Shares and bonds of Country Garden Holdings Co., China’s largest developer by sales, sank Thursday following a report it struggled to find demand for a new convertible bond. 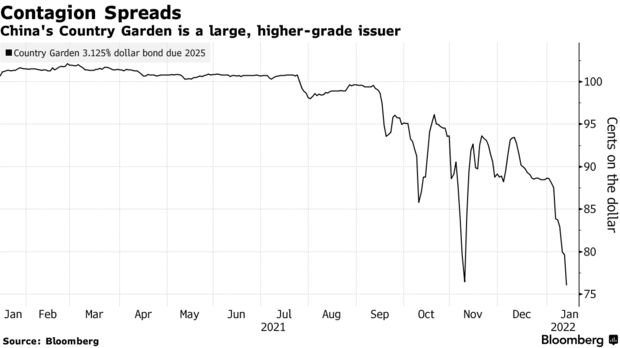 There are plenty of reasons why China needs to remold its property market. The sector is riddled with speculative buying and is over-levered, posing a risk to the financial system in a downturn. The price of housing is a burden on China’s already-shrinking families. The average cost of buying an apartment in Shenzhen was about 44 times the average annual salary for local residents in 2020. It worsens inequality as wealthy landlords hoard properties. Millions of homes sit empty and some construction projects damage the environment.

The industry has an oversized impact on the economy. When related sectors like construction and property services are included, real estate accounts for more than a quarter of Chinese economic output, by some estimates. More than 70% of urban China’s wealth is stored in housing.

“The property market is a symptom of the underlying problems in China’s economy,” said Craig Botham, chief China economist at Pantheon Macroeconomics. “For decades it’s been the go-to, easy solution to generate local government revenue, boost economic growth, and provide households with a place to put their money and see it grow.”

The solution, as is increasingly the case in Xi’s China, is tighter control by the state.

In Guangdong – home to Evergrande – local officials are facilitating meetings between struggling developers and SOEs, according to a Cailian report. Borrowing by major property firms used to fund M&A won’t be counted toward metrics that limit debt, people familiar with the matter told Bloomberg last week.

“The government wants to encourage consolidation in the housing sector – larger and often state-owned developers will likely take over the weaker players,” said Gabriel Wildau, a senior vice president at global business advisory firm Teneo. “They want to break the economy’s addiction to property.”

Chinese authorities have targeted excess in the property market before, but the importance of the sector to the economy meant such drives petered out when growth targets were threatened. Beijing is seeking to reduce the reliance on property by boosting investment in high-tech and clean energy industries — part of Xi’s plans to make growth more sustainable and higher quality. Yet such a process will take time, and patience.

“The transition will be long and painful, and we are not entirely sure whether the top has strong enough resolve to see through the arduous process,” said Hao Hong, chief strategist at Bocom International Holdings Co.

Officials’ determination is being tested. China’s property downturn is accelerating, even prompting a warning from the Federal Reserve. In cities nationwide, the decline in new-home prices has deepened every month since September, when prices fell for the first time in six years. Home sales continue to sink. Data Monday may show property investment grew just 5.2% last year, economists predict, the slowest since 2015.

Chinese developers are resorting to bond swaps, payment delays, equity sales and other desperate measures to repay debt. At least eight of the firms defaulted on pay dollar bonds since October. That includes Evergrande, whose crisis has ensnared lender China Minsheng Banking Corp., the world’s worst-performing bank stock. An index of property shares fell 34% last year, its worst since the global financial crisis in 2008.

Authorities are prepared to accept the risks to economic growth and financial stability from the campaign, according to Eswar Prasad, who once led the International Monetary Fund’s China team and is now at Cornell University.

“Beijing seems to have determined that these are likely to be transitory costs that cannot be avoided any longer for the sake of limiting future financial market gyrations and even more imbalances in property markets,” Prasad said.

Such costs are increasing. Shares of property firms fell 4.3% on Thursday, the most in four months, and are valued at just 30% their reported assets. That’s the cheapest in data stretching back to 2005. “Only a few survivors” will do well going forward, Citigroup Inc. stock analysts wrote in a recent note.

The rout in China’s high-yield dollar bond market is accelerating, triggered by firms previously considered financially more sound than Evergrande – like Shimao Group Holdings Ltd. and Sunac China Holdings Ltd. More worryingly, it’s spreading to higher-grade issuers such as Country Garden. Shares of the developer plunged almost 8% on Thursday, while its dollar bond due 2025 fell 4.8 cents to 74.4 cents, poised for its largest drop since Nov. 1.

Whatever form Beijing’s campaign to deleverage the property market takes, it’s clear that the era which enriched real estate moguls and homeowners alike has ended. A duller, more stable future awaits, if the Communist Party can stay the course and dodge a financial crisis.

“The golden age of booming property prices and soaring revenue for developers is probably gone,” said Gary Ng, senior economist at Natixis SA. “Home prices will only grow at a tightly managed zone in the future, meaning housing will look increasingly like utilities.”

These Are the 23 Measures China Just Unveiled to Save the…

US-China investment at risk of slowdown under Senate…