Investors seem to have lost their appetite for bonds issued by Chinese developers while rising defaults by an increasing number of cash-strapped companies have pushed the cost of funding for the sector to more than a decade high.

Chinese real estate companies issued 48.1 billion yuan (US$7.6 billion) worth of bonds in January in both local and foreign currencies, according to Beike Research Institute (BRI), a research arm of KE Holdings, China’s biggest online property broker. That is a 70 per cent slide from a year earlier.

“The credit environment has not fully improved, but we see positive signals from the central government are helping to ease the headwinds affecting the sector,” the institute said in a research note on Wednesday.

Chinese junk bonds have lost 34 per cent over the past six months, according to an ICE BofA Index that tracks US$56 billion of dollar bonds dominated by home developers. The yield has risen to about 23 per cent this week, from 10.5 per cent in June, shutting out borrowers. It reached 25 per cent in November, a level not seen since March 2009.

The confidence of the bond investors has been damaged since late last year when one home builder after another defaulted on their debts or pleaded with creditors to extend payment deadlines.

While China Evergrande Group, Fantasia, Modern Land and Kaisa Group Holdings were among the major developers that defaulted on their offshore debt amid a liquidity crunch, others such as China Aoyuan Group and Yuzhou Group have joined the list this year.

The central government and provincial level authorities have repeatedly highlighted that “the real estate sector is a pillar industry” and have taken several measures, including cutting mortgage rates and relaxing the three red lines imposed on the developers since September to ease the property industry’s suffering. 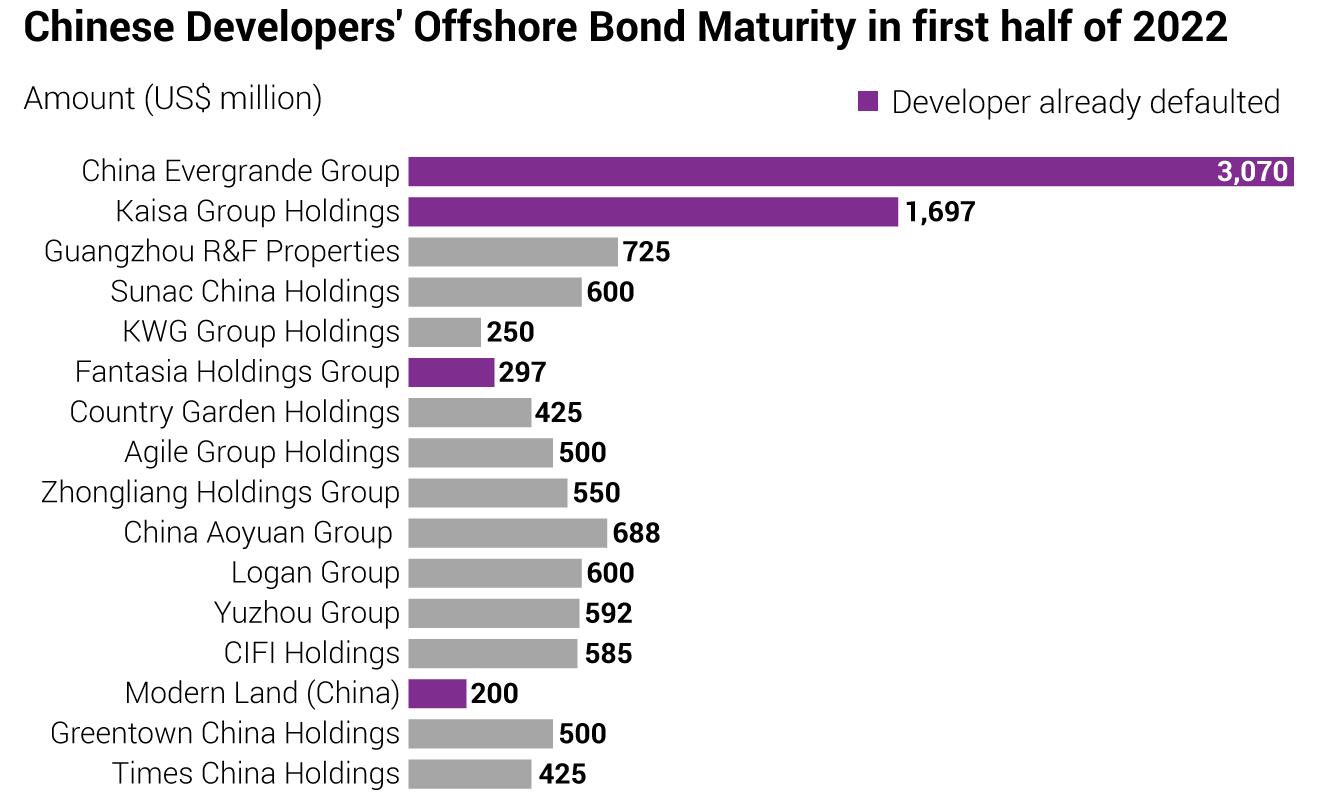 Offshore creditors of Evergrande and Kaisa among others have threatened to take legal action against the companies for not engaging with them substantively on potential solutions after missing bond payments.

“January used to be when there were heavy offshore bond issuances,” said Leonard Law, credit analyst at Lucror Analytics. “Given the sector’s troubles, it remains very difficult for property developers to issue offshore bonds, unless the issuer is a state-owned firm or a handful of strong private companies.”

Of the 48.1 billion yuan worth of bonds issued by Chinese developers in January, 14. 2 billion yuan was raised offshore, BRI data showed. Among the major offshore issuers were Shanghai-based CIFI Holdings Group, which raised US$150 million, while Foshan-based Country Garden Group issued HK$3.9 billion of convertible notes.

The funds raised offshore, however, amounted to only a quarter of that issued in January last year, while the average yield was 8.63 per cent, 263 basis points higher than that in December last year, meaning that the developers had to bear a much higher cost.

“This [higher yields] is likely to remain the case for the next two to three quarters, unless we see more concrete government support for the sector in terms of boosting contracted sales and the developers’ access to financing,” Law said.

China’s US$1.7 trillion housing market is yet to recover from a months long slowdown. The collective sales value of the mainland’s top 100 developers fell 41 per cent in January from a year earlier to 526.6 billion yuan, according to the China Real Estate Information Corporation, which compiles industry data.

“Bond market access will remain difficult for the sector as bond price volatility remains high and investors’ and lenders’ risk appetite stays low, and thus, it will increase refinancing risk for financially weak developers in particular,” said Kelly Chen, an assistant vice-president and analyst at Moody’s.