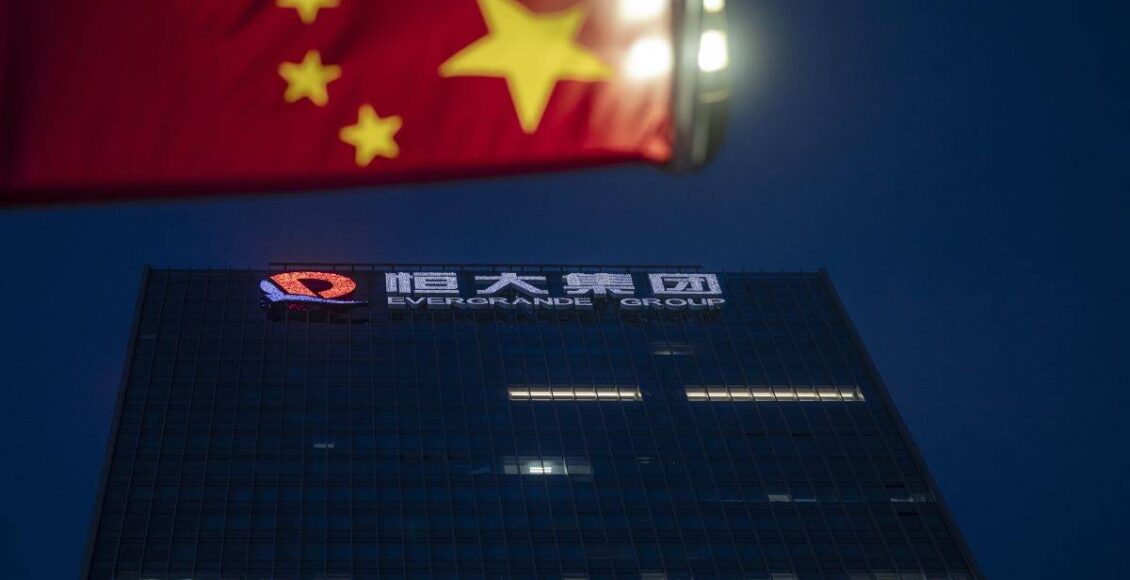 Shares of China Evergrande Group, the world’s most indebted property developer, and its property management arm were suspended on Monday in Hong Kong ahead of a potential sale of a controlling stake in the property management business, signalling a move to dispose of core assets as it seeks to stave off a debt crisis.

The Evergrande Property Services Group unit said trading was suspended pending an announcement under the city’s takeover code about a “possible general offer” for its shares, according to a regulatory filing.

Another China-based developer Hopson Development Holdings, whose shares also were suspended in Hong Kong on Monday for a potential takeover announcement, is planning to buy a 51 per cent stake in Evergrande Property Services Group for more than HK$40 billion (US$5.1 billion), according to Chinese financial news portal Cailian, citing people familiar with the matter.
Evergrande did not immediately respond to a request for comment on Monday.

Its shares have lost 82 per cent of their value in Hong Kong since mid-February. They closed at HK$2.95 on Friday.

Evergrande has more than US$300 billion in total liabilities and questions have been rising this year about its ability to service its massive debt load, particularly after it appeared to miss interest payments on some of its offshore bonds in recent weeks.

The company has engaged in a years-long spending spree to diversify its business beyond property development, expanding into everything from wealth management to electric vehicles (EV).

However, property sales continue to account for most of its revenue and the company has faced a cash crunch this year after Beijing adopted new rules designed to tamp down speculative property price bubbles.

The “three red lines” requirements adopted by the People’s Bank of China in August of last year limited the ability of developers to borrow, making it more difficult for Evergrande and other developers to cover their liquidity needs between the start of building a property and the time they sell a flat.

Evergrande has about 240 billion yuan (US$37 billion) in short-term borrowings, from bank loans to offshore bonds, that are due by the end of June 2022, according to its half-year report. That is nearly as much as the 259 billion yuan collectively owed in the next 12 months by its three closest competitors: Country Garden, China Vanke and Sunac China Holdings.

It remains unclear whether Evergrande made a coupon payment of US$83.5 million on offshore debt due September 23 or a separate payment of US$45.2 million last week. The company has a 30-day grace period before it can be declared in default on the bonds.

Credit rating agency Fitch Ratings said last week that it is likely Evergrande missed the payment due September 23 on a US$2.03 billion bond, which reaches maturity in March.

On Sunday, Bloomberg, citing people familiar with the matter, said Evergrande has guaranteed a US$260 million bond by an entity called Jumbo Fortune Enterprises, with an effective maturity date of Monday and could potentially be found in default within five days if the principal is not paid.

As of June 30, the developer had a portfolio of completed properties worth 144 billion yuan and a stable of properties under development worth 1.3 trillion yuan.

However, Evergrande has warned it is facing difficulty selling homes as a result of the negative news surrounding the company, saying it expects a “significant continuing decline” in contracted sales in September. It also has been tapping those property assets to pay off suppliers as its liquidity crisis worsened this year.

A number of prominent shareholders and bondholders have cut their exposure to Evergrande in recent weeks as its prospects have become more cloudy.

China Estates Holdings, Evergrande’s second-largest shareholder, dumped 108.9 million shares in the open market in August and in September and said it would record a loss of HK$1.38 billion in its other comprehensive income segment for the full year as a result. China Estates, the sole cornerstone investor in Evergrande’s 2009 initial public offering in Hong Kong, said it would seek to sell its remaining stake depending on market conditions.

Big banks and fund managers, including HSBC and UBS, also have reduced their exposure to cash-strapped Evergrande in recent weeks as its troubles multiplied and it faced downgrades by major credit rating agencies.