China Evergrande Group has officially been labeled a defaulter for the first time, the latest milestone in months-long financial drama that paves the way for a massive restructuring of the world’s most indebted developer.

Fitch Ratings cut the developer to restricted default over its failure to meet two coupon payments after a grace period expired on Monday, according to a statement. The credit assessor said the developer didn’t respond to request for confirmation on the payment, and is assuming it wasn’t made. The downgrade may trigger cross defaults on Evergrande’s $19.2 billion of dollar debt.

The development marks the beginning of the end for the sprawling real estate empire started 25 years ago by founder Hui Ka Yan, setting off a lengthy battle over who gets paid from what remains. It also poses a challenge to the Chinese government’s efforts to prevent a debt crisis in the property sector from sparking broader contagion. Authorities have scored some successes, with markets taking the most recent developer debt stumbles in their stride after a reserve-ratio cut announced by the central bank on Monday. 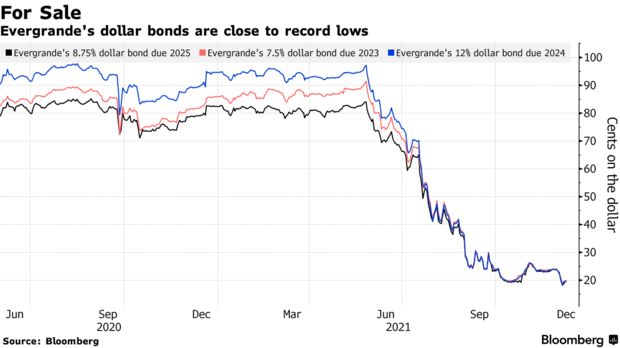 Evergrande, which disclosed more than $300 billion of total liabilities as of June, said in a brief exchange filing on Dec. 3 that it plans to “actively engage” with offshore creditors on a restructuring plan. The company is planning to include all its offshore public bonds and private debt obligations in the restructuring, people familiar with the matter said separately.

“The downgrade may not have an overt or immediate impact on the Chinese process, but may subtly increase pressure on the company (and regulators) to quickly reveal initial restructuring proposals,” said Brock Silvers, chief investment officer at Kaiyuan Capital in Hong Kong.

Fitch also downgraded Kaisa Group Holdings Ltd. to restricted default, citing its failure to repay a $400 million dollar bond that matured Tuesday. The ratings cut may also trigger cross defaults on the developer’s $11.2 billion of outstanding dollar debt. The company had become a symbol of the boom years in Chinese credit markets after emerging from a high-profile default in 2015.

Chinese junk dollar bonds held earlier gains of as much as three cents on the dollar after the downgrades.

Beijing’s reluctance to bail out Evergrande sends a clear signal that the Communist Party won’t tolerate massive debt build-ups that threaten financial stability. The People’s Bank of China reiterated on Friday that risks posed to the economy by Evergrande’s debt crisis can be contained, citing the developer’s “own poor management” and “reckless expansion” for the problems it faces. PBOC Governor Yi Gang said in remarks broadcast Thursday that Evergrande will be dealt with in a market-oriented way.

At the same time, the government is now deeply involved in management of the company. Guangdong said last week it would dispatch a team to Evergrande to ensure “normal” operations. The developer’s new seven-member risk committee includes senior managers from Guangdong state-owned enterprises and China Cinda Asset Management Co., the nation’s largest bad-debt manager. Another is from a law firm, while only two members are from Evergrande, including Hui.

Evergrande bondholders including Marathon Asset Management have said they expect offshore creditors to be near the bottom of the queue for repayment. The Chinese government’s prime motivation is often maintaining social stability, which in this case means giving priority to homeowners, employees and individual investors in wealth management products.

Some offshore creditors are already consulting with financial and legal advisers. It could help that bondholders may include some of the world’s biggest investment firms, which China is unlikely to want to alienate. Ashmore Group, BlackRock Inc., FIL Ltd., UBS Group AG and Allianz SE have all reported holding Evergrande debt in recent months, Bloomberg-compiled data show.

Evergrande’s overseas obligations also include bonds with keepwell provisions. These are essentially a gentleman’s agreement that often involves a pledge to keep an offshore issuer solvent, and may not be legally recognized in this restructuring.

“The rights and interests of creditors and shareholders will be fully respected in accordance to their legal seniority,” central bank Governor Yi said in a pre-recorded video message Thursday at a seminar in Hong Kong.

China Evergrande’s offshore debt, assets could be separated in restructuring…