China Property Bets Roiled by Deleted Post on ‘All Out’ Support

For investors accustomed to carefully calibrated official messaging on the Chinese property market, the statement from Heilongjiang’s government was remarkable: It called for “all-out efforts” to promote the real estate industry’s growth, by far the strongest show of support for the embattled sector by a provincial-level authority.

Then, not long after screenshots of the statement began pinging across trading desks on Tuesday, it quietly disappeared from Heilongjiang’s WeChat account and government website.

The episode has triggered a fresh bout of speculation over the fate of China’s property sector, which has been reeling for months from a government crackdown on highly leveraged developers and overheated housing markets.

Hopes that the Heilongjiang statement might signal an acceleration of recent government efforts to dial back the crackdown sent a gauge of Shanghai-listed property stocks up 3.8% on Tuesday to the highest level since June. That optimism faded Wednesday after the statement’s removal, with the index falling 0.9% as of midday in Shanghai.

“It’s hard to say whether this can be read as a signal of easing in the property sector,” said Castor Pang, head of research at Core Pacific-Yamaichi International Hong Kong Ltd. “But one thing is for sure, Beijing is not going to just let the developer crisis explode. On the stocks front, it’s obvious that investors are hyping any news or headlines, even if it’s incremental, and they will take profit very quickly.” 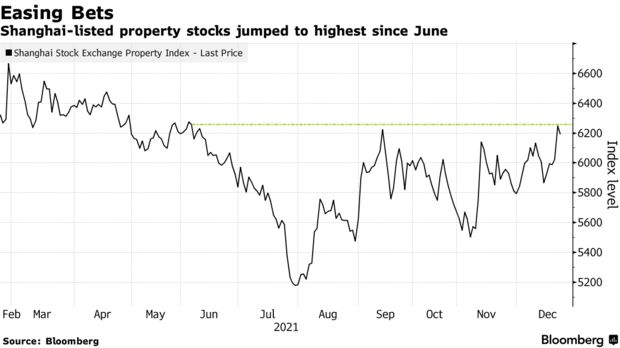 While several local governments in China have issued supportive comments and policy tweaks on the property sector in recent weeks, higher-level authorities have been more measured in their communication.

At the same time, top Chinese decision makers have continued to use the phrase “houses are for living in, not speculation,” suggesting a reluctance to dramatically reduce restrictions on the sector.

Against that backdrop, the statement from Heilongjiang province stood out. “It’s a strong policy signal,” Yan Yuejin, research director at E-house China Research and Development Institute, said before the statement was removed. “Earlier supports for the property market were scattered, mostly giving out home-buying subsidies, but the Heilongjiang government offered a package to underpin the entire property market.”

The news sent more than 20 Chinese property and construction stocks jumping by the 10% daily limit on Tuesday. Volume for Shenzhen Heungkong Holding Co. – a small developer based in southern China, was the highest in almost four years. 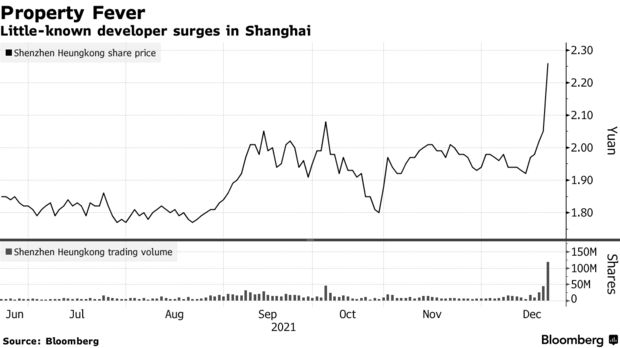 Mainland-based traders also piled into Hong Kong-listed developers through cross-border exchange links. They bought a net HK$258 million ($33 million) worth of Sunac China Holdings Ltd. shares on Tuesday, making it one of the most actively traded in the stock connect. Hong Kong derivatives traders snapped up bullish Sunac call options, with volume in one January contract surging almost 600%.

The question facing investors now is how much weight to place on the Heilongjiang statement. Jiang Liangqing, managing director at Zhuhai Greenbamboo Private Fund Management, said provincial and local authorities are likely to continue shifting further toward easing mode while being less vocal about policy changes.

“I’m not surprised at all that it got taken down,” Jiang said of the Heilongjiang statement. “However, this doesn’t change the fact that Heilongjiang will persist in its drive to shore up the market, and other provinces are already doing so, even it they are more discreet about it.”

That optimistic view got some support in state-backed media on Wednesday, with the China Securities Journal reporting that developer fundamentals are starting to improve and their share valuations are likely to continue recovering. More than 20 cities have rolled out local measures to stabilize the property market, the newspaper said in a separate article.

Chimerica revisited: why the US and China should forge a new symbiotic relationship for peace

Ukraine: US urged to use ‘vigorous diplomacy’ to push China…