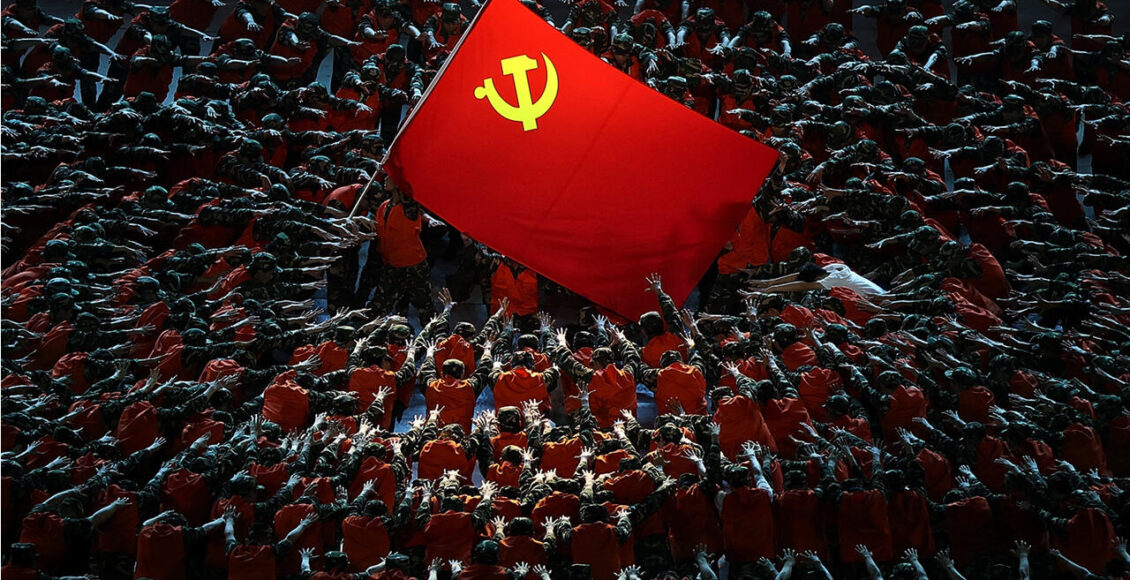 Since the Chinese Communist Party began moving away from a Maoist economy to a more mixed one that included ownership of private property, foreign investment and trade, there has been only one hard-and-fast rule: the primacy of the Communist Party in all facets of social and economic life cannot be challenged.

So over time, there are expansions of freedom that abruptly end when someone crosses that line. The most dramatic example was Tiananmen, which remains a forbidden topic in China, one of many. But we are in another period where a variety of private actors in the Chinese economy and society are feeling the brunt of the Party’s ire and fears.

So what is it they fear? They fear exactly what western China optimists confidently predicted would happen once the Chinese began opening their economy:

I know these arguments, because I made them myself. But Xi and the Party also see this as a risk to Party primacy, which it is. And if they have to decide between control and faster growth, they will choose control every time.

They are making that choice right now, and focusing on businesses that have the ability to counter Party’s primary place at the center of Chinese life: education, tech platforms, gaming and billionaires.

Education is hugely important in Chinese culture, and parents are known to spend large portions of their income on private tutoring to give their child an advantage. Since most families continue to have only one child, even in the absence of the One Child policy, they can concentrate resources. The low end of surveys says about two-thirds of Chinese parents pay for some sort of outside tutoring. The high end estimate is 95%. Until the crackdown, there was astounding growth in this sector.

The Party took out nearly five years’ worth of growth for these companies. New Oriental Education, TAL Education, and Gaotu Thechedu, all released almost identical press releases on August 18 and 19. The New Oriental money quote was repeated almost word-for-word in the others, as if it had been written for them:

In addition to the restriction mentioned:

I put this section first, because I think it’s the most important to the Party. Their most important lever of control is lifelong propaganda that begins in school with a very filtered view of Chinese history. A teacher in a Chinese public school would not dare teach about the many millions who died of famine in the Great Leap Forward, the massive dislocations of the Cultural Revolution, or what happened in Tiananmen. But a private tutor in a one-on-one setting may think these very true episodes from Chinese history are very relevant to Chinese history lessons.

The Party can be the only source of “truth,” and private education companies represent a danger to their monopoly on “truth.”

I began with education, because I think it is the most important aspect of this to the Party. But chronologically, this all began last October with Jack Ma, formerly the third-richest man in China, and founder of Alibaba. He may have thought this money insulated him, but it did not. In fact, it made him a target.

Ma was in the process of rolling off Alipay, Alibaba’s dominant payment platform, into the Ant Group. Alipay had a billion users, over 100 trillion yuan in annual payment volume, and it also had the largest money market fund in the world. It was about to IPO at a $300 billion valuation.

Ahead of the IPO, Ma gave a speech at the Bund Forum where he felt a little too comfortable for the Party’s liking.

False modesty aside, Ma did speak too freely regarding what he saw as the many deficiencies in the Chinese financial system. To western ears, the speech sounded anodyne, but there was a lot in there that set off alarm bells in Beijing.

And then China’s third richest man disappeared for three months. The Ant IPO was stopped, and Alibaba shed market cap quickly. It is still going.

That began a frontal attack by the Party on various types of tech platforms, beginning, but not ending with fintech. We’ll get to gaming next, but the over-riding theme has been:

This has led to things like the DiDi IPO fiasco.

They are not done with the tech platforms.

My mother restricted my sister and me to two hours of TV a day when we were kids. Even she would find the new Chinese restrictions on gaming to be draconian. Kids are not only restricted to three hours of gaming a week, but they are a specific three hours on Friday, Saturday and Sunday. Previously it was 90 minutes on weekdays, and three hours on weekends and holidays. Not only are gaming companies going to lose a ton of engagement, but their servers will have to beef up handle the inevitable surge during those three hours.

For gaming giant Tencent, this was just one more blow to them since this all got going:

This is not the first time the Party has gone after gaming — consoles were banned from 2000-2015 — because they see it as a unique threat. In the first place, they see the amount of time that young people spend gaming to be troubling as it saps attention from where it should be — on the Party and their central role in Chinese life.

But even more, threatening is what they are doing while gaming. Massively-multiplayer games are very popular in China, and like many companies, Chinese gaming companies have been feeling their way towards building a “multiverse.” A multiverse is a virtual world that goes beyond gaming to include all social activities like conferences, live events, and even school.

This is a world where the gaming company runs the show, not the Party — they are absent from these virtual worlds. There are a variety of social interactions happening in these games and multiverses that are much harder for the Party to control. They want young people out of these virtual worlds, and back into the real world, where they can exercise tighter control.

This began with Jack Ma, but did not end with him. One of the key western optimist arguments was that private capital would lead to capital accumulation, and new centers of power in civil society. That ended poorly for Jack Ma. The Party very obviously sees this as a threat, and is willing to slow economic growth as a tradeoff.

This goes along with the punishing scale part of the tech regulation push, and they are intertwined. Since the Jack Ma episode, Xi Jinping has been mentioning “common prosperity” quite often. 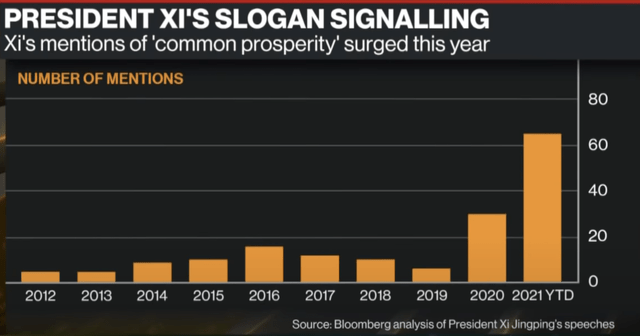 This culminated with an August 17 speech on the subject

Common prosperity is the essential requirement of socialism and an important feature of Chinese style modernization. It is necessary to adhere to the concept of people-centered development and promote common prosperity in the pursuit of high-quality development…

It is necessary to strengthen the regulation and adjustment of high incomes, protect legal incomes in accordance with the law, reasonably regulate excessive high incomes, and encourage high-income groups and enterprises to return more to the society

By now, everyone understood which way the wind was blowing and the corporate promises of charitable giving began immediately. It’s unclear how this will work in practice, but the numbers being thrown out are very large.

Michael Pettis is a professor of finance at Peking University.

Of course, many of the richest people in the country are Party members, but this will likely not be on them.

This gets back to one of the theoretical underpinnings of the shift to private property — let’s get rich first, and then we can afford socialism. Despite pretty much eradicating poverty, income inequality in China has remained very high, and the Party thinks now is the time to do something about that.

The reason is twofold. The first is in line with what we have been discussing — billionaires represent an independent source of power not directly under Party control. But also, the Party has been looking to refocus growth towards internal consumption and away from being so dependent on exports, and if it’s in the range that Michael Pettis estimates, it will have an effect on that. This is a massive “voluntary” tax on the very wealthy of China. I’m still not sure who besides the government can distribute $80-$90 billion a year and how that would even work, but it is now a competition to see who can be the most generous.

Where This Goes Now

For years, I have mostly missed out on the run in the Chinese stock market. I’ve owned Alibaba and Tencent, because they are hard not to love. I haven’t owned any Chinese shares since 2018. Since the trade war really got cooking that year, a more nationalist Xi emerged. I have been expecting something like this since then, and I’m frankly surprised it’s taken this long.

The reason is a phrase I use frequently: “The Chinese Communist Party is the world’s second biggest tail risk after climate change.” Something like this is always inevitable, and there’s no telling when it could happen or what can trigger it. Jack Ma certainly didn’t realize the hornet’s nest he stirred up. This being China, there was plenty of new regulation since 2018, but nothing on this scale.

We are towards the low point of this cycle. After the Party is convinced that everyone got the message and won’t forget it soon, they will gradually begin easing up until the next time someone like Jack Ma forgets who’s in charge.

But more near term, I don’t think Xi is done cowing the new aristocracy of China, and re-asserting the Party’s primacy in all facets of Chinese life. Look for more regulation and “voluntary” measures in 2021 in the same industries before we see bottom, but I think the gaming announcement may be the last major blow.