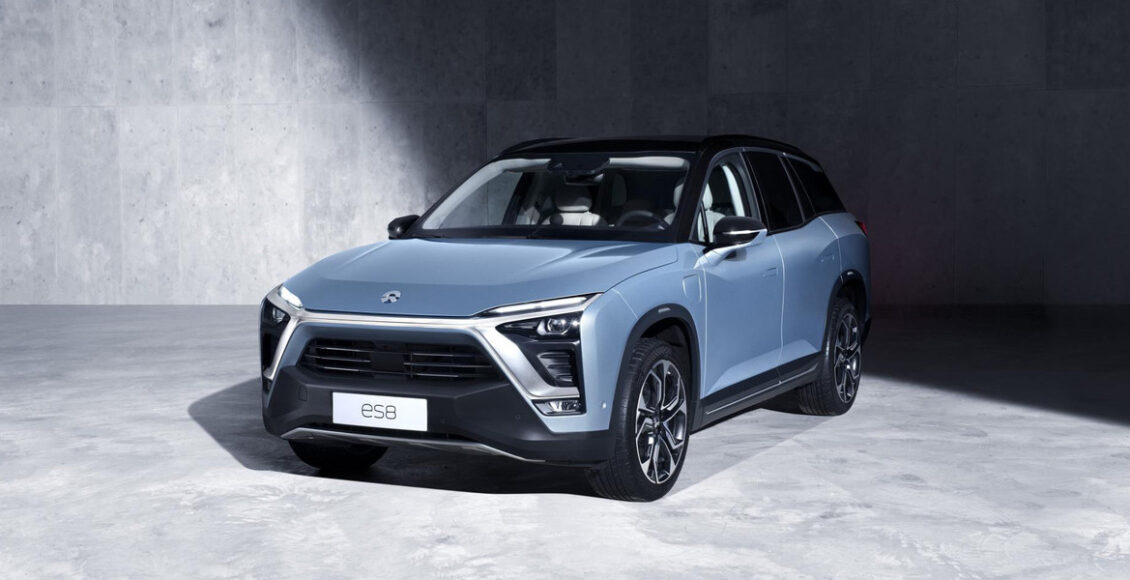 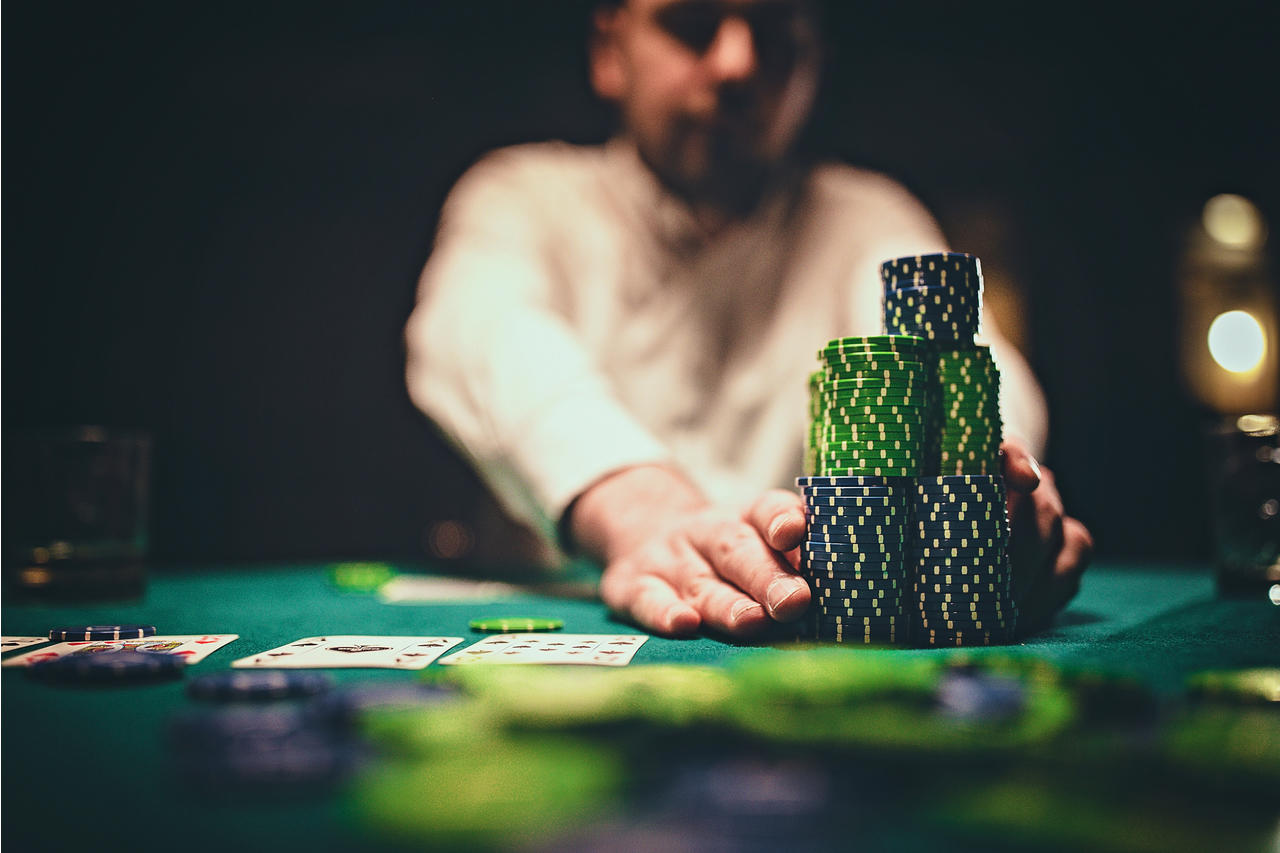 NIO Inc. (NIO) shares have been climbing in the last couple of months, but have yet to retake the highs they made over six months ago. This is odd since NIO has been publishing nothing but bullish news and outstanding results in that time. NIO has what it takes to become a global brand, as has been proven by its recent performance and coming growth plans. I believe the stock is substantially undervalued and this is a great time to go all-in. 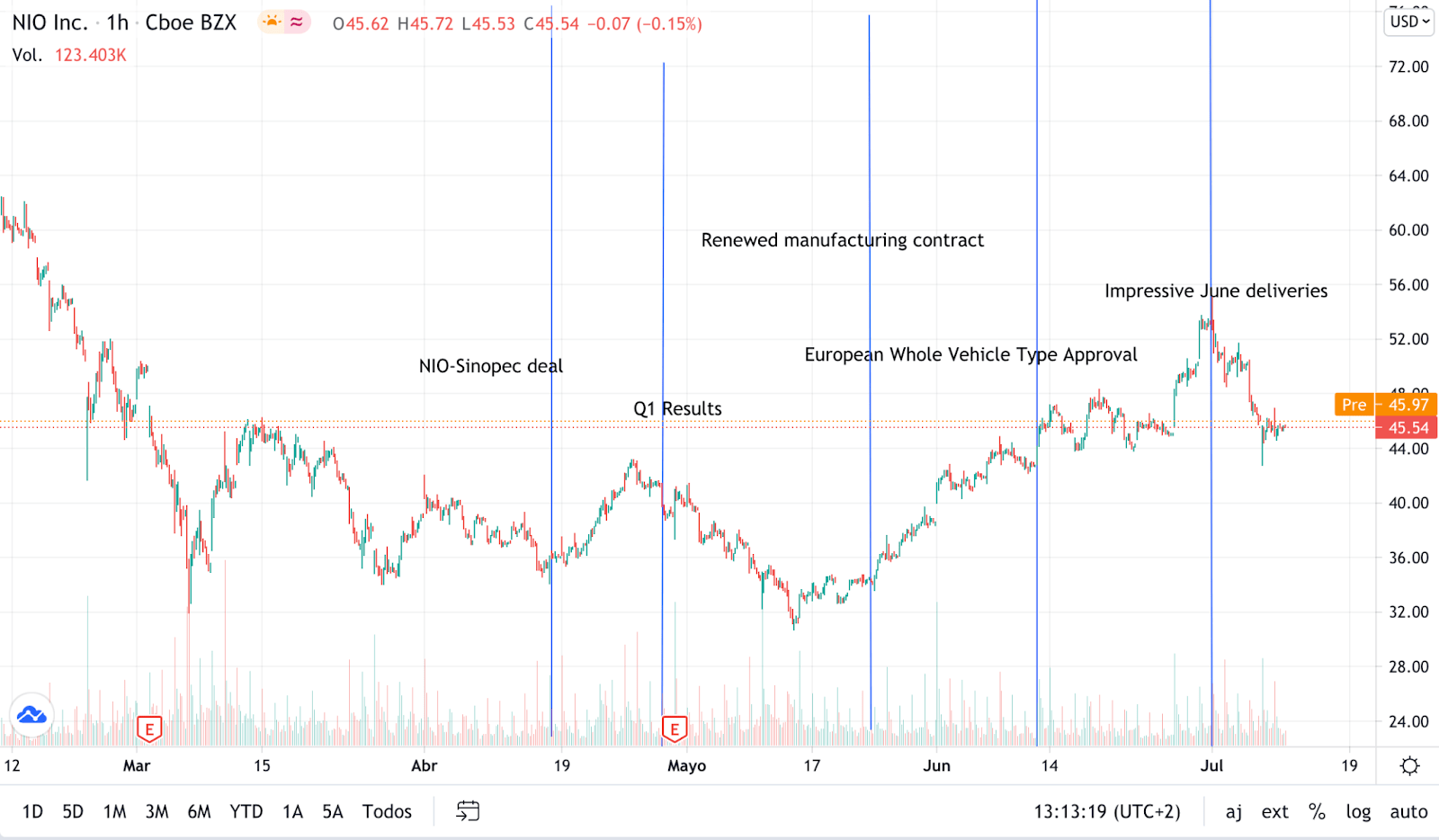 In the chart above, we can see the evolution of NIO’s stock price over the last six months. I have also marked the dates of relevant NIO news. During February and March, NIO sold off alongside the broader market. Around the 19th of April, NIO signed a deal with Sinopec (NYSE:SHI) where they agreed to collaborate to build over 5000 battery swap stations. This was incredible news, given the fact that BaaS technology is one of the company’s key selling points. We did see the price pick up for a bit, but this seemed to be undone after the company reported Q1 results, which I discussed in this article. Granted, the company missed on revenue and EPS, but it outperformed in the most important metric, deliverables.

NIO’s shares seemed to find support around $30, and the price has steadily climbed since then, again, accompanied by very bullish news. On the 24th of May, NIO renewed its manufacturing contract with Jianghuai Automobile Group (JAC), expanding the annual capacity to 240,000 units. This was a very important deal for NIO, as it does not have its own manufacturing capacity yet. Three weeks later, NIO obtained a license to begin selling the ES8 in Europe, where the company will begin selling in Norway this September.

Lastly, NIO reported a 20.4% increase in deliveries in June, a welcome acceleration that may have been behind the +10% price increase we saw during those days. However, since then the share price has once again plummeted, with the stock trading at $45 again.

NIO’s stock is still way below its previous highs, and that is despite what I see as a barrage of great news. Deliverables are strong, manufacturing is secure and the company has a clear vision and plan as to how to expand its BaaS model and global footprint. And yet, the price does not reflect this new reality at all.

At the very least, one would have to admit that NIO is undervalued vis-a-vis itself a year ago.

What’s next for NIO? 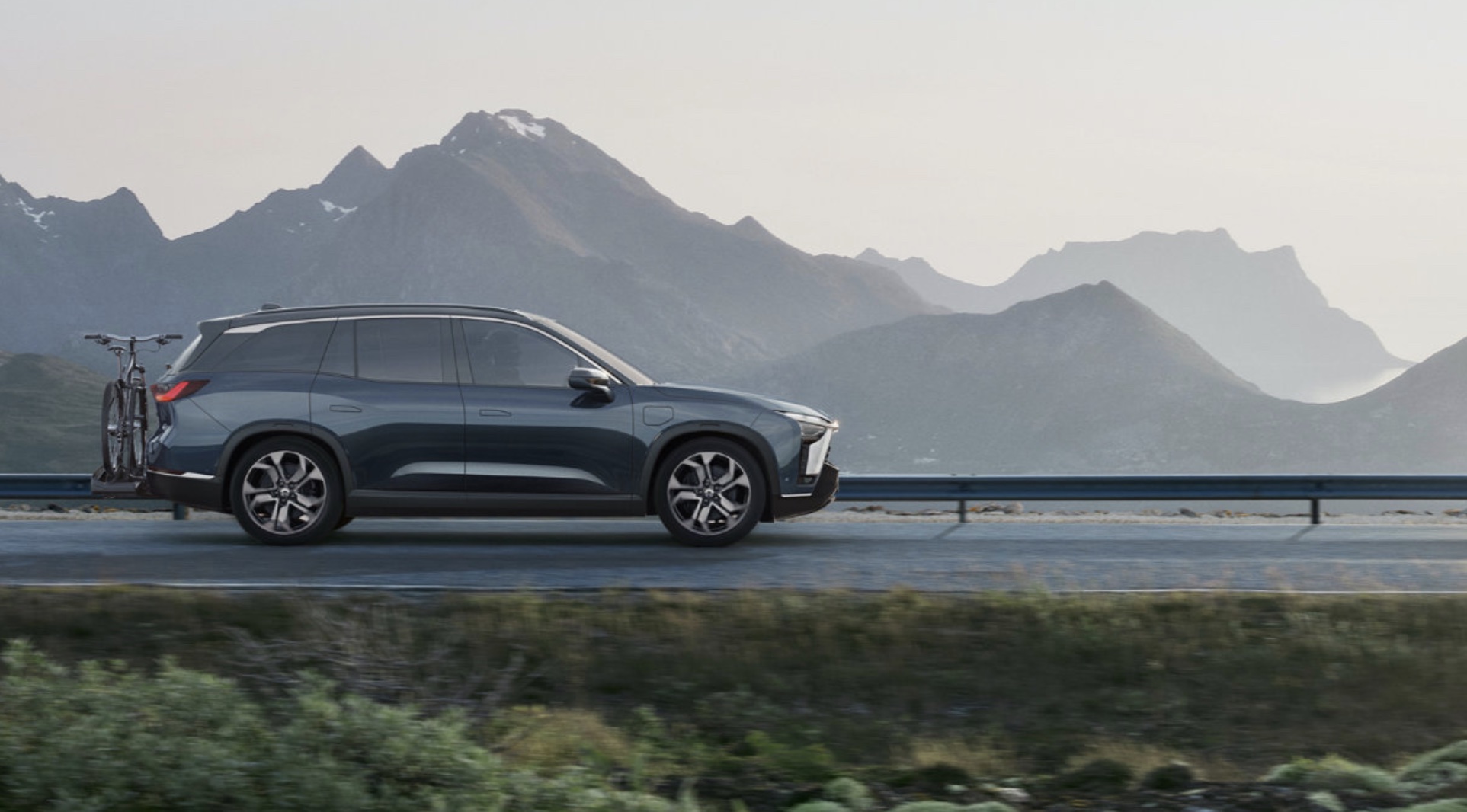 NIO has come a long way since it was founded in 2014, but it is still a young company, and we have a lot to look forward to.

Firstly, the NeoPark finally launched in May. This is the first-ever “smart electric vehicle industry park”. In other words, the NeoPrk aims to be an all-purpose hub for everything EV related. NIO will be the largest player in the NeoPark, and it will be a key factor in achieving global EV domination.

The NeoPark will be home to 10,000 R&D personnel and 40,000 technical workers and will have a production capacity of 1 million vehicles. NIO will finally have its own manufacturing facility, but the NeoPark holds even more promise thanks to its ability to attract the best talent from around the country. As I’ve mentioned before, delivering superior technology and product is the only way to win at the EV game, and this initiative will ensure that NIO stays ahead of the competition.

We also have some exciting news coming from the Battery Swap part of the equation, with NIO announcing ambitious expansion plans in its recent Power Day in Shanghai. NIO raised its current target from 500 to 700 deployed power stations by year-end. The company stated that they expect to have 4000 power stations by 2025.

However, what’s most exciting about this development is that the company announced it would be making these battery swap stations available to other companies:

Meanwhile, NIO announced plans to make NIO Power’s charging and swapping system and BaaS (Battery-as-a-Service) fully available to the industry in order to share its achievements with the automotive industry and smart electric vehicle users.

This is incredible news for NIO, as it could mean another solid source of revenue for the company. In fact, Ford Motor Company (F) is already using NIO’s network in China.

Lastly, the stage is now set for NIO to take its business to Norway. According to the company, the first NIO showroom should be set in Oslo by the end of the year. The company also plans to deploy its battery swap stations, though it is also partnering with Plugsurfing to allow conventional charging on its ES8 and ET7.

Norway will be a key fight in the EV battleground. The country is one of the largest consumers of EVs, with ambitious plans to go fully electric by 2025. This market is heavily dominated by Tesla Inc. (NASDAQ:TSLA), so it will be interesting to see how NIO’s launch in Norway goes. Whatever happens, good or bad, will be a sign of things to come.

Why I believe NIO will be successful

It’s perhaps the most obvious question to ask when it comes to analyzing EV companies, but few do. Looking at sales and profitability is all well and good, but at the end of the day, what sets a winning EV company apart from a losing one is the product.

The NIO ET7 is designed with style, comfort and ease of use in mind. The ET7 is one of the few EVs out there that rival Tesla’s models, achieving up to 1000 km in range and reaching 62 mph in 3.9 seconds.

But perhaps the most compelling selling point of NIO’s cars is the inside. As I already mentioned in this article, we are moving beyond using cars as simple transportation tools. The question consumers are asking is, what more can it do? What more can I do with it? The ET7, for example, will boast an “intelligent cockpit,” which the company is developing in partnership with QUALCOMM Incorporated (QCOM). We are talking next level assisted driving, high-performance computing and even 5G capabilities.

The 3rd Generation Snapdragon Automotive Cockpit Platform is designed to deliver highly intuitive AI experiences on the NIO ET7 and rich visual experiences with support for multiple displays throughout the vehicle, providing the NOMI in-car AI system, as well as interactions on in-vehicle displays with exceptional support for heterogeneous computing capabilities.

Tesla became a successful EV company because it sold a good product, like NIO. Electric cars have the advantage of being green, which is a great side benefit, but they also have the ability to simply be much better products, because they blur the line between cars and computers.

Underpinning NIO’s success is the company’s commitment to developing a strong and exclusive brand. NIO markets itself above all as a luxury carmaker and is intent on selling a lifestyle together with its car. NIO offers its users access to the NIO Club House and even an exclusive NIO App. In fact, their website even features a NIO Life section, where you can find different partnerships and projects NIO is involved in in the realm of design.

Lastly, this is something that doesn’t get talked about enough, but I believe that William Li is one of the best CEOs in the industry. Li is an accomplished man from a humble background, who actually made his fortune in the auto industry. Li founded Bitauto Holdings Ltd. in 2000, a website that allowed users to compare cars to make better, more informed buying decisions.

Who then, better to run a successful car company? Who better to understand the needs and wants of the consumer?

Of course, investing in NIO is not without risk, and investors have to be wary of these.

For starters, the risk of investing in Chinese stocks, or rather Chinese ADRs, came back to the surface of financial news, as China forced the recently IPO’d DiDi Global Inc. (DIDI) to take down 25 of its apps. NIO is part of this group of high-profile Chinese companies which could suffer a regulatory blow at any time. This may be in fact why NIO has seen its share price decrease in the last week, despite its acceleration in deliveries. So far, however, NIO has not had any regulatory issues and has in fact been aided by local authorities. Furthermore, I would point out that there aren’t many ways of insulating ourselves from the Chinese government. Is an investment in Tesla that much better, when they have a factory in Shanghai?

Another issue with NIO is that it is unknown how exactly it will monetize its battery swap stations. Arguably, these could actually be a heavy financial burden with scarce rewards. Furthermore, there are clear limitations to creating a battery swap station that can accommodate other car models. How will NIO work around this?

Lastly, NIO’s Norway launch will be an important event that, as I have mentioned above, could backfire. NIO is very popular in a niche segment in China, and some analysts believe it does not have the brand recognition necessary to make a dent in Norway. However, this could have been said of Tesla a few years ago, and the company now dominates that market.

It definitely won’t be a smooth journey for NIO, but this is one of the companies with the most potential you can invest in right now. NIO has what it takes to make it globally, and when it does, it could become a company worth billions, if not trillions.