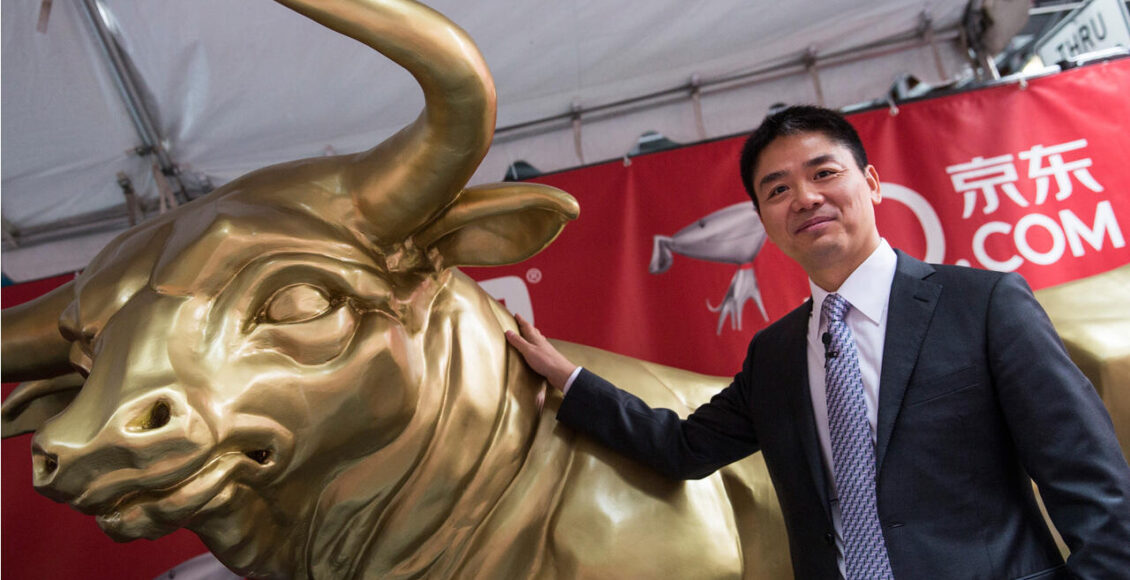 September has once again lived up to its name and the last few weeks were not great for the stock market. Many major indices around the world are in a corrective phase right now. And while the major US indices lost only in the mid-single digits, the German DAX lost almost 10% compared to its former high. But this is only a small correction we are seeing in the United States and Europe compared to the situation in China. And especially the Chinese technology companies are deep in bear market territory and in the last few weeks, I started to pay closer attention to some Chinese companies.

Aside from Tencent, which I already covered in November 2018 for the first time, I published articles about Alibaba, Pinduoduo, and Baidu in the last few weeks. And in the following article, I will look at another Chinese technology company – JD.com, Inc. By market capitalization, we are talking about the 18thbiggest company in China, and we could look at another company which is undervalued and has the potential to grow with a high pace.

JD.com is a Chinese e-commerce company, which was formerly called 360buy and changed its name to Jingdong in 2013. The company was founded in 1998 and today the company has close to 400,000 employees. It is also operating and managing more than 23 million square meters of warehouses nationwide and over 9 million self-operated SKUs. Today the company is one of the major B2C online retailers in China and the two major competitors are probably Tmall (which is owned and run by Alibaba) as well as Pinduoduo. It is also worth mentioning, that Tencent is holding about 17% of the shares of JD. 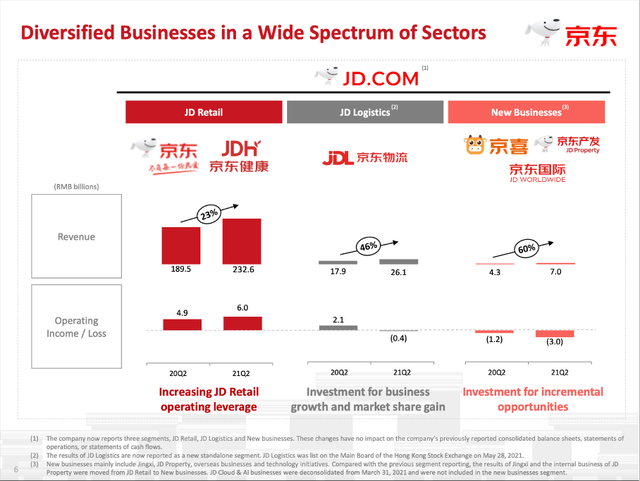 Starting with the first quarter of fiscal 2021, JD changed its business structure and today, the company is reporting in three business segments – JD Retail, JD Logistics, and New Businesses.

And as long as talking about business segments, we can also mention that JD Cloud & AI businesses were deconsolidated from the company from March 31, 2021, and the operating results are not included in the “New Businesses” segment from the second quarter of fiscal 2021 going forward.

JD also has an extremely strong balance sheet with little amounts of debt and a lot of cash and short-term investments that can be used to fuel further growth. As of June 30, 2021, JD had RMB 562 million in short-term debt as well as long-term borrowings of RMB 2,907 million. When comparing the total debt to the total shareholders’ equity of RMB 248.2 billion, we get a debt-equity ratio of 0.01, which is almost not worth mentioning. Additionally, we can compare the total debt to the operating income the company can generate (RMB 7,861 million in the last four quarters) and it would take less than half a year to repay the outstanding debt.

In my opinion, JD has a great balance sheet, and not only must we not worry about solvency or liquidity, but cash, cash equivalents and short-term investments combined are 27.5% of the current market capitalization of JD (HKD 758.7 billion resulting in RMB 628.3 billion), which is a lot. Or to put it differently, JD has RMB 64.50 in cash, cash equivalents and short-term investments per share. 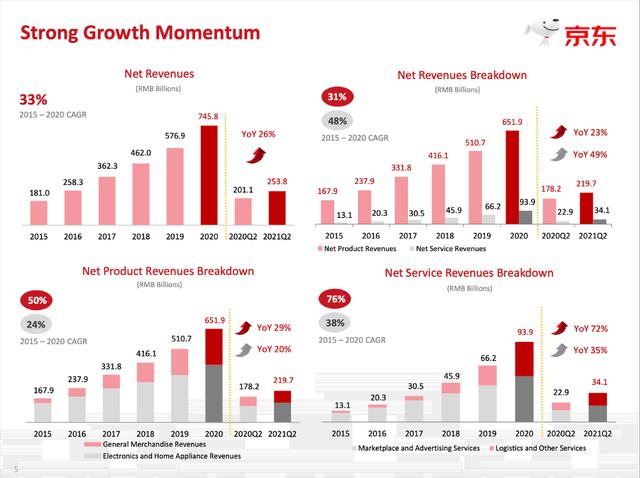 Of course, we should not only look at the growth rates in the last few years, but also at the expected growth rates for the years to come. Analysts expect that JD will be able to grow with a stable pace in the years to come. According to analysts, revenue will grow with a CAGR of 15.41% in the next ten years (with growth rates being higher in the next few years and then slowing down over time). And for the next five years (until the end of fiscal 2025), analysts assume that earnings per share will increase with a CAGR of 33.7%. 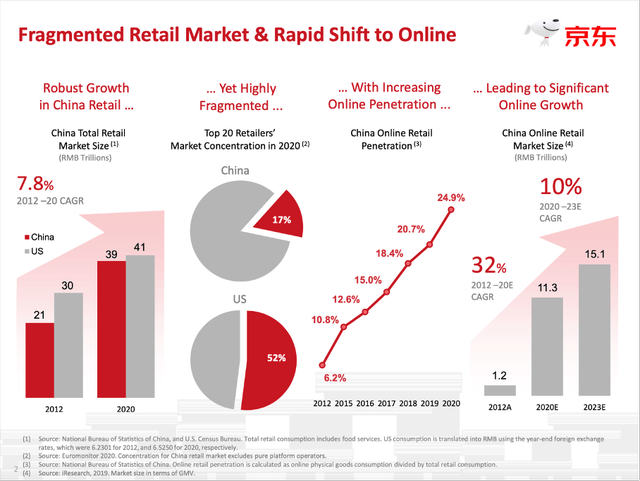 The Chinese retail market is still highly fragmented, with the top 20 retailers having a market share of “only” 17% (in the United States, the top 20 retailers have 52% market share). When looking at these numbers a consolidation is likely in the next few years (or maybe next decade) and as JD is one of the major players in that industry – together with Alibaba and Pinduoduo – I consider the company being one of the profiteers of such a consolidation and it could gain market shares from competitors.

But JD cannot only profit from taking additional market shares. The underlying market is also growing. In the last eight years, the total retail market size in China was growing with a CAGR of 7.8% and is now almost the same size as the U.S. Retail Market. And although growth will slow down, the online retail market size in China (right now RMB 15.1 trillion) is expected to grow with a CAGR of 10% in the years to come.

One of the last steps in every analysis is looking at the intrinsic value of a stock and comparing that intrinsic value to the current stock price to determine if it could be a good investment. When trying to determine if JD could be a buy at this point or not, we can start by looking at some simple valuation metrics – mainly the price-earnings ratio as well as the price-free-cash-flow ratio. JD is trading for 20.6 times earnings and for 18.9 times free cash flow and considering the fact, that we are dealing with a company, that has the potential to grow with a high pace, these simple valuation multiples seem rather cheap.

Aside from simple valuation metrics, we can also use a discount cash flow calculation to determine an intrinsic value. As basis for such a calculation, we can use the free cash flow of the last four quarters, which was RMB 26,394 million (in fiscal 2020 it was RMB 30,087 million). We already mentioned above that JD is still growing its revenue close to 30% annually and analysts are expecting earnings per share to grow with a CAGR above 30% in the next few years. However, we are a bit more cautious and will assume 20% growth in fiscal 2021 and then assume growth will slow down over the next 10 years until it can grow only 6% till perpetuity. When calculating with these assumptions (and a 10% discount rate as well as 2,679 million in outstanding shares), we get an intrinsic value of RMB 401.63 for JD. When using current exchange rates, this is resulting in HKD 485 as intrinsic value. At the time of writing, JD is trading for HKD 283, and therefore, the stock is trading almost 42% below its intrinsic value.

When a stock is trading so far below its intrinsic value, we really must question if we are looking at a true bargain or if we are missing something. In many cases, the explanation for a deeply undervalued stock is wrong growth assumptions and stocks trading for extremely low valuation multiples are often facing troubles.

One reason could be worries if JD will really succeed in this low-margin business. When talking about retailers we usually look at successful companies (survivorship bias) – we look at Walmart’s performance during the past century, we look at Amazon’s performance in the 21st century. But we often seem to forget, that it is not so easy to be successful in this low-margin business. Logistics and retail (even if it is not traditional brick-and-mortar) are capital intensive and JD is also pointing out in its Annual Report:

Because we operate our own fulfillment infrastructure, which requires a large and rapidly growing work force, our cost structure is more vulnerable to labor costs than that of many of our competitors, which may put us at a competitive disadvantage.

However, I like to point out at least two aspects. First, JD is not at the beginning and already invested in its infrastructure and it also demonstrated in the last few quarters, that it can be profitable. In fiscal 2019 and fiscal 2020, the company could generate operating income. Second, with the massive amounts of cash and cash equivalents on its balance sheet, the company can continue to invest if necessary and I am quite confident, that JD will succeed.

A second reason why JD is trading for such low multiple is obvious – and was also mentioned briefly above: JD is another Chinese technology company and as these big Chinese tech companies have been facing immense headwinds from the Chinese government, investors are worried and throwing the stocks out of portfolios. I have already written about this aspect in my articles about Tencent and Alibaba. Both articles were titled “Buy when there is blood in the streets” and my sentiment is obvious. While I don’t want to ignore the risks, I consider the current situation rather a buying opportunity. During the last earnings call, JD also commented on the situation:

Therefore, we believe these policies are not intended to restrict or suppress the Internet and relevant industries, but rather to create a fair and orderly business environment and to promote long-term and sustainable development of these industries.

We believe that the regulatory goals are conducive to JD’s long-term business growth. So far, our business maintained steady growth while committing to best compliance practices.”

But it is interesting, that JD was not hit so hard. Compared to other Chinese technology companies – especially Baidu, Tencent, and Alibaba, we can see, that JD is trading “only” about 35% below its former high, while Tencent is trading 41% lower and Baidu and Alibaba are even trading 55% lower right now.

JD is yet another Chinese technology company, that suffered due to the uncertainty that was created by the Chinese government. And while we must face the possibility of growth rates slowing down for JD (maybe also as a consequence of the Chinese government’s actions), I think the stock is deeply undervalued. The current sell-off is generating long-term buying opportunities in my opinion and JD might be a good pick for long-term investors. We are rather talking about short-to-mid-term turmoil and not about real existential threats.

US fund manager piles US$1.2 billion into Alibaba, JD.com, Chinese tech peers in 12…