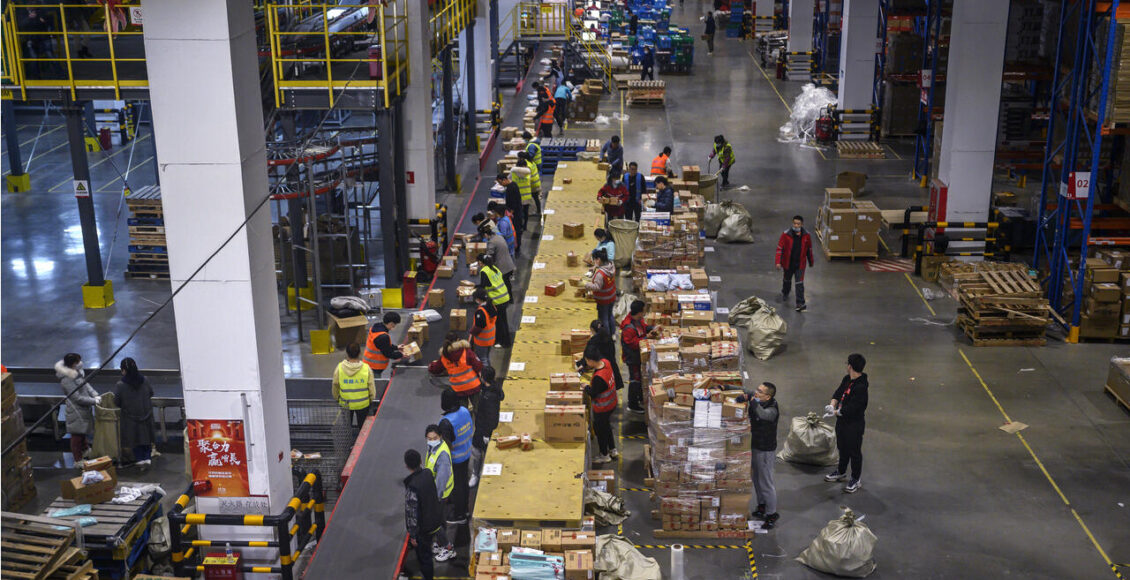 JD.com is an e-commerce giant in China leading a Chinese online retail market that is projected to grow 10% CAGR for 2020-2023. Since 2016, it grew at a 30% CAGR. It is heavily investing in R&D, infrastructure, and its people. It has a bulletproof balance sheet with few long-term debts, and the operating cash flow is positive. The current market evaluation is cheap since its PS ratio is only 0.9, the lowest in the group. I found a lot to like about JD, but every trade has buyers and sellers. Here I will discuss some of my concerns on future challenges and competition. 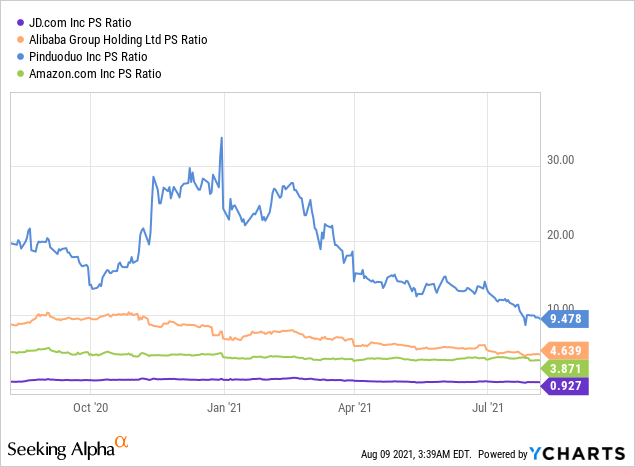 Different from competitors Alibaba and Pinduoduo who use an eBay-like asset-light model, JD purchases products from suppliers (or as an authorized reseller) and sells goods directly to shoppers through their online channels. It owns warehouses, sorting centers, and operates its own logistic system for reliable order delivery. JD also has a paid membership program, but it is not as popular as Amazon Prime in the US. In a nutshell, JD looks very like a Chinese Amazon without Prime and AWS.

This model is working well so far. As the graph below, JD can maintain its operating margins and grow net profit margins. 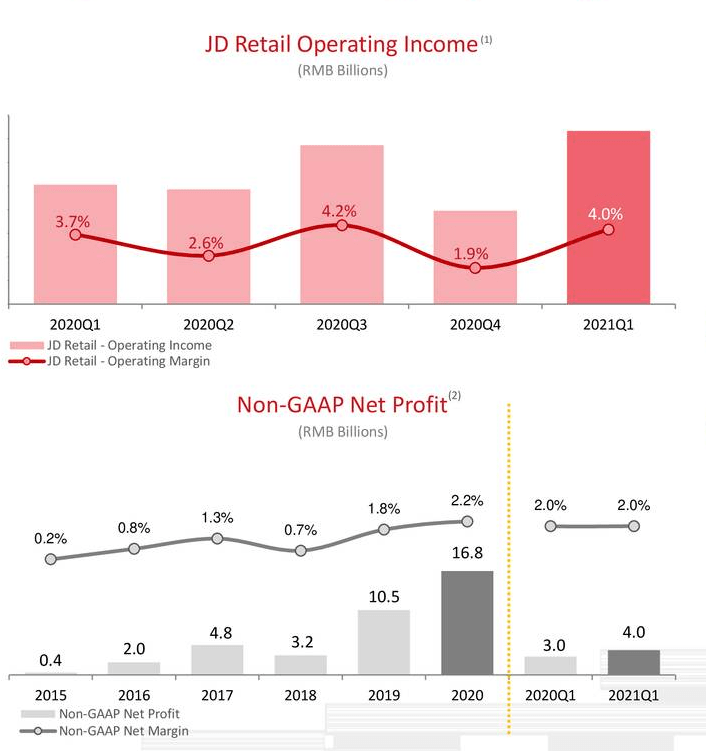 However, the Chinese e-commerce competition is more intense than in the US. JD is known for selling high-quality products, especially electronic goods. BABA’s Tianmao and acquisition of Suning provide similar product qualities for its customers. Suning’s large network of physical stores can also offer customer relations for BABA with its offline connection. This left JD little pricing power to improve its margins at a high level. As the chart below, JD’s gross margin of 14.41 is way lower than its competitors. 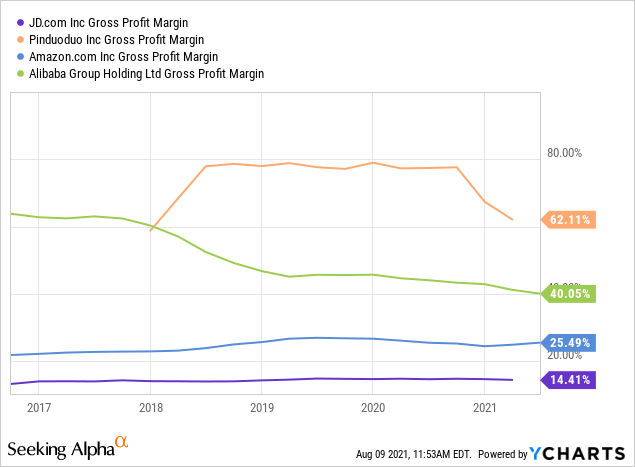 I think JD’s future success is far from guaranteed. 14.4% gross margin and 2% net profits (non-GAAP) leave few rooms for error when competing with BABA and PDD. Especially in China, the risks of inflation, labor shortages, natural disasters, and social unrest are growing.

China is a big country, but most of the economical activities focus on several small provinces including Beijing, Shanghai, Zhejiang, Guangdong, Fujian, Sichuan. As the map below, green provinces have population outflows while red means inflows. We can see that most of the Chinese Provinces are having population outflows. China has had this trend for several years already and I don’t think it will change soon. In the next ten years, I think the majority of wealth and labor will concentrate on a number of tier-one metro areas at a faster pace. Demographics in many western and central provinces will shrink and age. 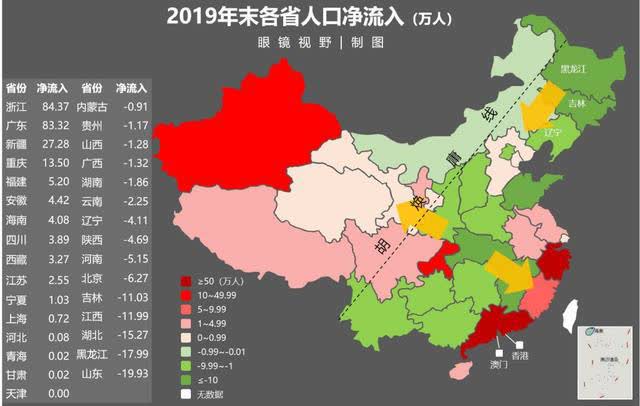 The majority of goods on Amazon are built in China and imported through a limited number of ports in CA/NY/GA/TX. Most of the delivery routes started there. Therefore, US e-commerce deliveries are long and concentrated. While in China, you have a huge amount of small manufacturers in many more locations. Their e-commerce deliveries are short and scattered. A centralized warehouse model maybe not be the best fit there.

Instead of last-mile delivery, JD’s logistic systems focus on many large fulfillment warehouses (1000+) along with personnel (200k+) in all Chinese counties. They take years to build and are hard to relocate in a short time. Given the fast-changing demographics, the demands for some warehouses are likely to change in near future. This may lead to locations of those warehouses not being as optimal as before.

Logistic competitor SF Express has extensive last-mile delivery networks that don’t have to go through warehouses. So it can make adjustments and be more flexible and efficient than JD. Last year, SF Express has quarterly sales of ¥38B with ¥20B fixed assets. In contrast, JD Logistics only has ¥10B sales but needs ¥21.6B fixed assets. The competition on the logistic side is supposed to be the strength of JD, but it is not winning. 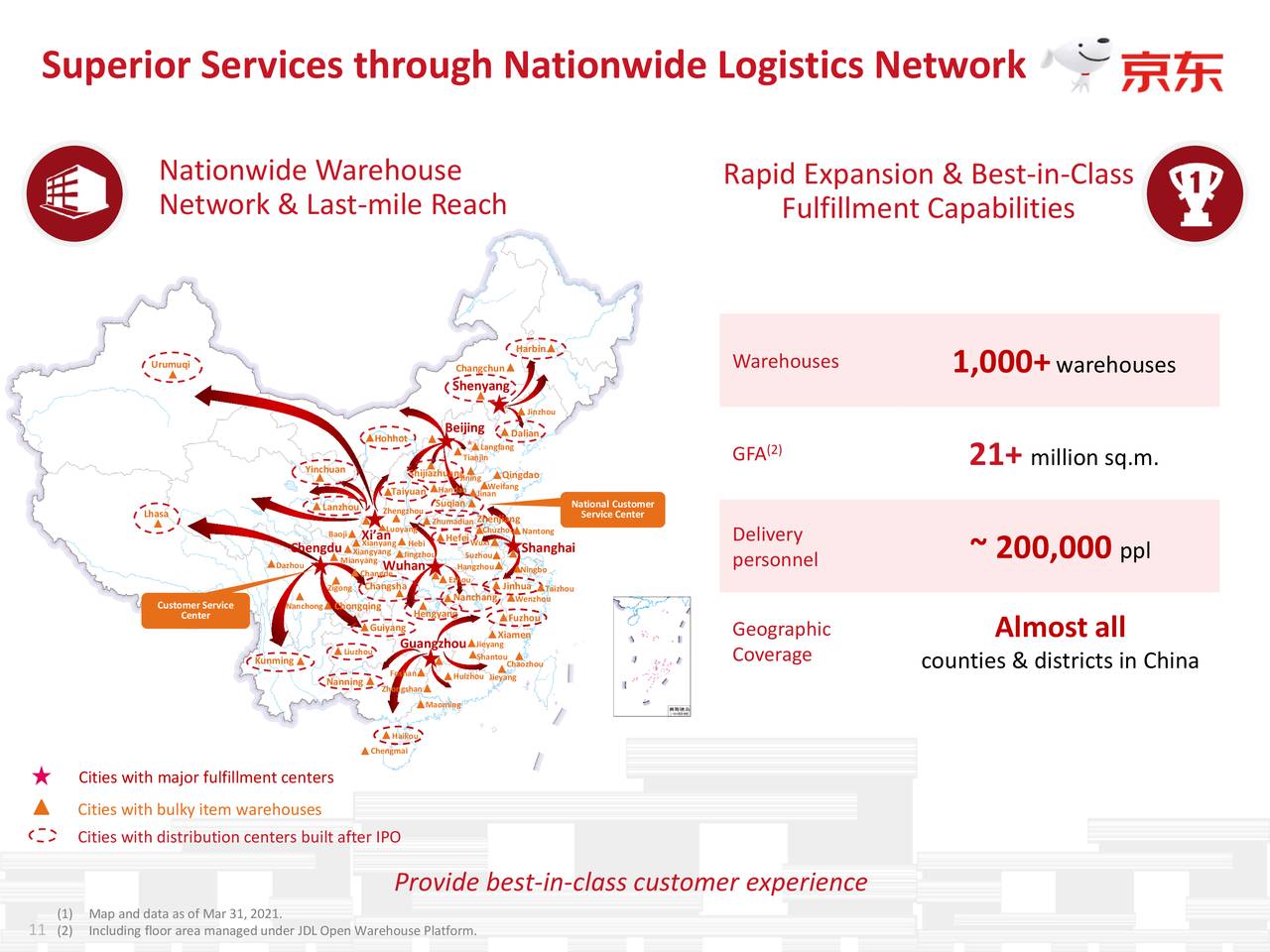 JD is known for selling more expensive and quality products to Chinese middle-class consumers. I have doubts on how large this group will be. Prime Minister Li Keqiang (second powerful in China) once revealed that ” although national average income is 30k RMB a year, there are still 600 Million people who only make 1k RMB a month.” These people are stuck in rural areas with very limited distributable income. One of the biggest Chinese Businessman Cao Dewang has said that “China only has 200 million real consumers.’ You could say the Chinese consumer group is currently small so they have the potential for future growth. But you could also argue that the communist social structure (between the rulers and the ruled) can only sustain a limited number of consumers. I think this is another huge uncertainty of JD since we don’t know how large their real target market is.

Although wages are increasing, the costs of living in China such as groceries, housing, education, and medicare are also rising and put huge pressures on average people. The recent social protest ‘TangPing’ shows a large number of young people giving up the ‘China dream’ to pursuing minimalism and frugality. This new generation will be extremely sensitive to costs.

On the other hand, BABA and PDD can be more flexible to face domestic inequality. Their business offers super cheap options (often not authentic) that most Chinese consumers can afford. For example, you could buy a 358 RMB coat for 78.8 RMB on PDD. 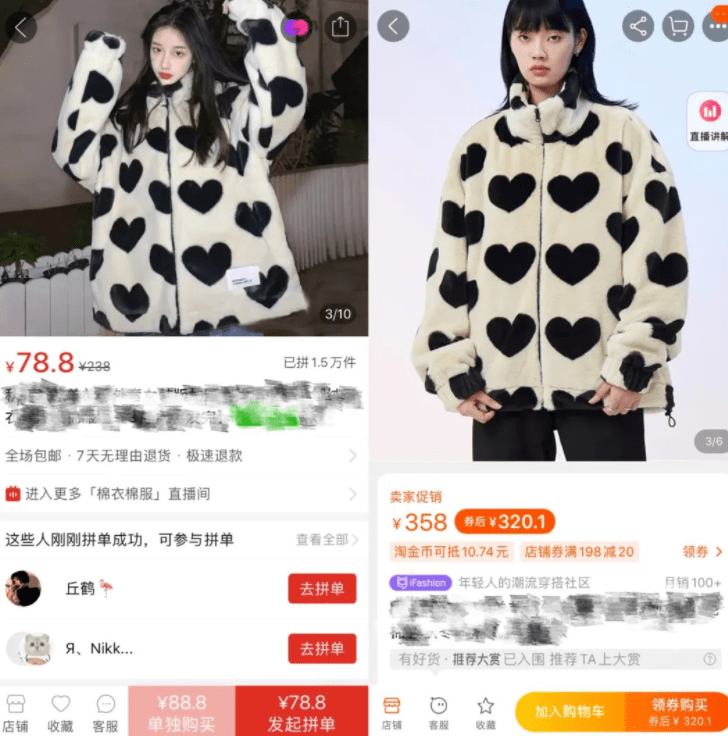 Problems in China are always hidden until they blow up. I think one issue investors may consider is the volatility of the Chinese RMB which may affect all foreign investments there, not just JD.

As 15% of global GDP, China has an absolutely closed currency system. You cannot freely exchange RMB for dollars in China. There is a limit of 50K per year, and the paperwork is extremely difficult. Kyle Bass said “if the yuan were to free float tomorrow it would depreciate 30-40%. How many wealthy Chinese businessmen do you know that they cannot wait to invest more money from their own currency and send their kids overseas.” This is a concern since you don’t really know how many Chinese people want to exchange for dollars. Its current account (chart below) has also turned negative twice in the last two years. 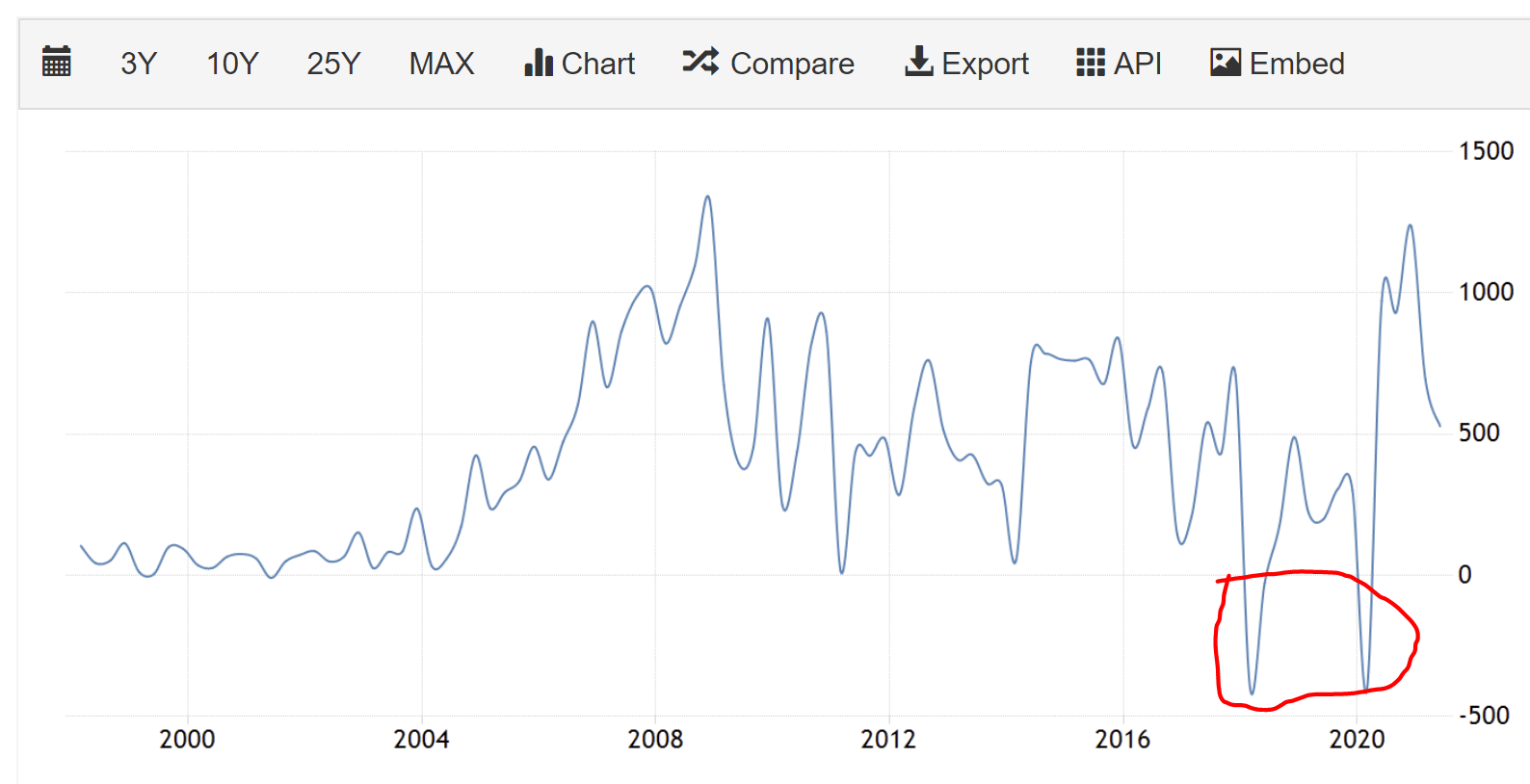 Chinese external debt has grown 3.4 times to 2.4 Trillion dollars while its foreign reserves stay at 3 Trillion dollar level. These are not good signs either under the environments of US companies leaving China (slowly). The Hong Kong dollar has been pegged to dollars at a tight band of $7.75 to $7.85 HKD per U.S. dollar for 36 years. After the Hongkong crackdown, will the HKD peg continue to work?

JD and Amazon have similar growth rates. JD’s PS ratio is 0.9 while Amazon’s is 3.8. Amazon’s international and AWS businesses are doing great and growing fast. I think these two sectors could justify the 2x PS ratios of JD’s. Amazon has almost no significant competitors while JD is facing intense competition. This could also add another 50% to JD’s PS ration. So we think Amazon’s multiples should be 3 times (2*1.5) as many as JD. Currently, Amazon is 4.33 times JD’s PS ratio which has a 29% premium (4.33/3-1). Does the 29% premium enough to offset all the other Macro risks that reside in China? I think it is close but not by a safe margin. So I would say JD is currently fair valued when comparing to Amazon.

JD.com stops selling 86 games from Call of Duty to Super Mario Maker 2 on its online…