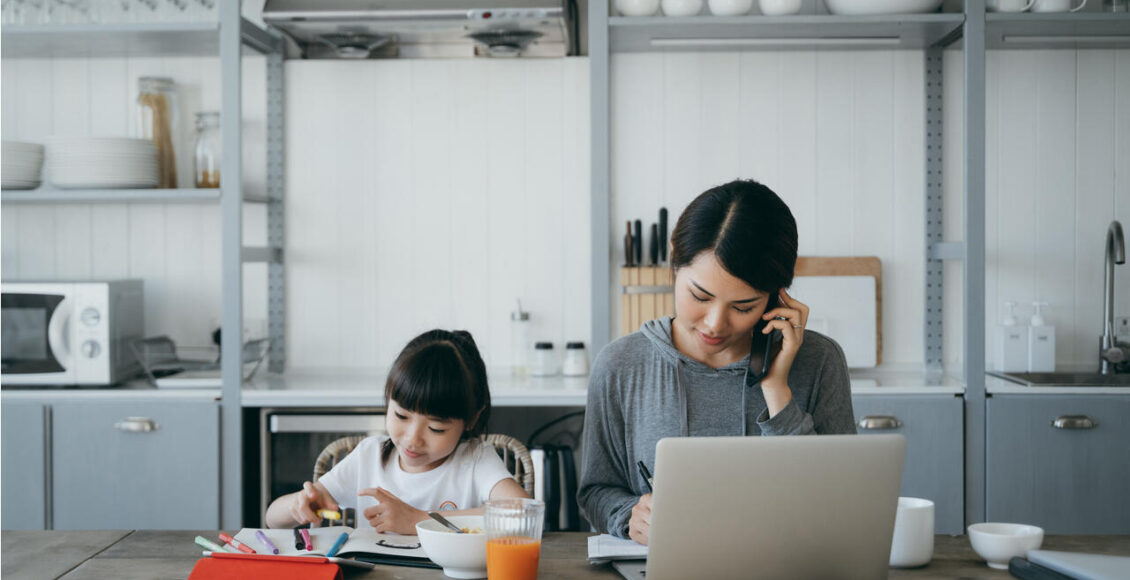 While others have cancelled earnings call altogether, Gaotu Techedu (GOTU), a Chinese online tutoring companies has released a news update through a SEC filing after the crackdown by the Chinese authorities.

Still, this has not prevented its shares from being more impacted than peers TAL Education Group (TAL) and New Oriental Education (EDU). 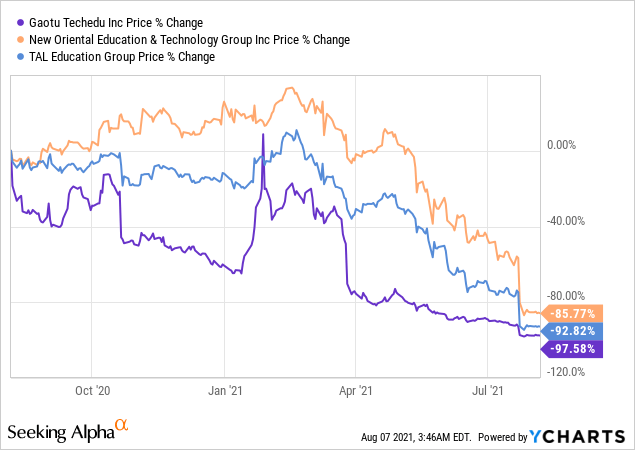 The market seems to be ditching the tutoring plays, forming part of China’s educational technology (edtech) industry. Gaotu’s stock price is now at $3.18, representing a bargain and calling for a deeper analysis of future prospects.

The crackdown and implications

First, contrarily to what is commonly believed, the true reason for Chinese authorities becoming more stringent is that there has been “perceived abuse” by some well-known online education institutions. These are viewed as having made unjustified claims pertaining to the quality and pricing of the online education they provide to K-12 students.

For Gaotu, a technology company, online tutoring services for K-12 students accounts for nearly 70% of overall revenues. This is lower than TAL’s 80% exposure, but more than Oriental’s 62%, as I had mentioned in my previous thesis on the same subject.

Still, the fact that Gaotu share price fell most heavily seems to relate to the maximum amount it was fined for a false pricing claim concerning online courses. In this context, the company delivers online large-class after-school tutoring services. 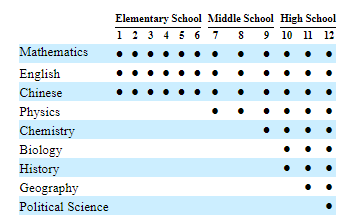 Exploring further, edtech plays are also seen as trying to propose their services to make up for the additional “free” time available to students, after the Chinese educational authorities had previously implemented workload-reduction measures, by lessening the number of teaching hours in public schools.

Here the word “opinion” is important as most of the news are coming from Chinese language media outlets following reports by the People’s Republic of China ((PRC)) regulators. Subsequently, these news have then been reproduced by other news outlets, with reporters and analysts adding their own interpretations.

A noteworthy point is that, “the regulations have not been published, and the company has not received official notification of the regulations”. Investigating further, these opinions have indeed been emitted by the State Council, China’s highest governing body, but at this stage, have been circulated as a draft policy document in Chinese.

Translating into English, the document, titled “Further alleviation of compulsory education: Opinions on the burden of homework and after-school tutoring,” proposes 30 measures to control the education sector. Steps range from reducing homework load, raise education quality and standardize education services. Some of the measures including forcing after-school tutoring companies to become non-profits, appear to be on the extreme end of the spectrum.

Now, these regulations, if implemented in their present form, will have material adverse impact Gaotu’s after-school tutoring services related to academic subjects in China’s compulsory education system, which in turn may adversely affect the company’s results of operations and prospects.

The company is currently carefully considering the provisions of the “Opinion” and assessing compliance measures. It adds in the SEC filing that it “will proactively seek guidance from and cooperate with government authorities in connection with its efforts to comply with the Opinion and any related rules and regulations”.

Now, full compliance with the measures in the draft document may entail a complete overhaul of the very business model, with the “non-profit” clause representing a threat to Gaotu’s continued existence as a publicly listed entity.

However, there are some reasons to believe that the final regulations will not necessarily be the same as the draft.

First, it is unlikely that the government is willing to kill off its $70 billion edtech industry. Also, while the authorities want to reign in on the industry, it would be absurd to completely get rid of the private sector’s participation in the education process. For this purpose, these private institutions also teach non-academic or professional subjects like foreign languages. Also private institutions contribute in the development of key competencies for the dynamic Chinese economy.

Second, while the state is targeting costly tutoring classes, many parents actually need them. For this matter, many families believe that the education overhaul will end up in helping higher income groups who can devote personal time to their wards or simply hire expensive private tutors. 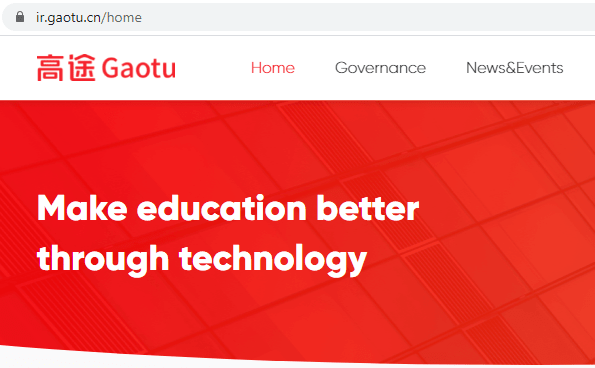 On the other hand, it will limit options for uneducated parents dreaming of seeing their child perform white collar jobs. Unlike the rich, they cannot send their children overseas, in turn suffering from more limited domestic options in life.

Thus, the regulations could exacerbate inequalities between the rich and the middle class, by rendering the system more competitive.

Finally, with COVID resurgence in China, the authorities may give a breathing space to online education providers as they are reminded of painful memories of December 2019 when schools had to be shutdown.

An announcement featuring relaxation of measures by the Chinese authorities is unlikely. The reason is that China remains a communist country, one where the government prides itself on its ability to cater for citizens’ needs all by itself, in contrast to the U.S and other democracies, who openly acknowledge the role of the public sector.

Still, there are sufficient counter-arguments against the proposal in its actual form, which, while not likely to change the State Council’s viewpoint in the short term, should take considerable time to implement. For this matter, it is not possible to reverse more than two decades of market liberalization within one year, which is the time allocated to local governments to issue implementation plans for reducing excessive homework. They are also expected to achieve significant results, of reducing the after-school tutoring burden on students within three years.

Now, this also implies that local governments will interpret and implement the regulations differently. According to Wang Xuming, a former spokesman for the Ministry of Education, speaking in an interview for the South China Morning Post:

Reducing the excessive burden on students does not mean that students should not study after school or do their homework, but that they need to do their homework in a scientific manner. So, how do they do that? The policy undoubtedly brings new challenges to school and parents, and I am afraid it will take quite a long time to implement.”

Thus, Gaotu may have time on its side.

With $444.2 million in cash and equivalents as at the end of March 2021, the company has the financial capability to carry out reforms. However, this is conditional to reducing operating costs drastically, from a quarterly average of $339 million effected over the last four quarters. Now, this reduction is feasible as 87% of operating expenses as at the last reporting quarter consisted of SG&A expenses, which includes marketing.

The share price being at its lowest since the IPO, an investment has started to make some sense in view of the risk-reward rationale. Also, given the resurgence of COVID, resulting in recurring need for social distancing, Gaotu’s Weishi interactive learning platform on WeChat and mobile app Genshuixue are key digital transformation alternatives, compared to the four walls of a classroom.

Reminiscent of the amount of casualties back in 2020, and willing to reduce infection rates risk among the younger generation it cares so much about, the Chinese government could reduce its regulatory ardor, at least for the time being.

Finally, many will consider Gaotu to be a speculative buy, as there is a risk of the stock falling further, but given the low Price to Sales multiple of only 0.65x, or 52% undervalued relative to the consumer discretionary sector, opting for a small position makes sense for those who are prepared to wait.

Ant Group director sees relaunch of IPO ‘before too…