It may be all doom and gloom for Chinese tech stocks for much of the past year, with Alibaba Group Holding at the forefront of a US$2 trillion sell-off. One US money manager, however, is making a big bet on a rebound.

San Francisco-based Dodge & Cox spent US$716 million loading up on the American depositary shares of Alibaba, NetEase, JD.com and Baidu and other Chinese peers in the first three months this year, according to its US regulatory filings. That raised its total net purchases to more than US$1.26 billion over a four-quarter sequence.

Its holdings in selected Chinese tech stocks in the 13F filings amounted to US$3.6 billion on March 31. In all, Dodge & Cox listed ownership in 197 stocks globally, valued at US$164.6 billion.

It reflects one of the most aggressive bets at a time when many peers are shunning the securities and the sector because of the growing risk of state intervention in private businesses. Just like Singapore’s Temasek Holdings, the fund manager is banking on cheap valuations and policy support in looking beyond the current bearish streak. 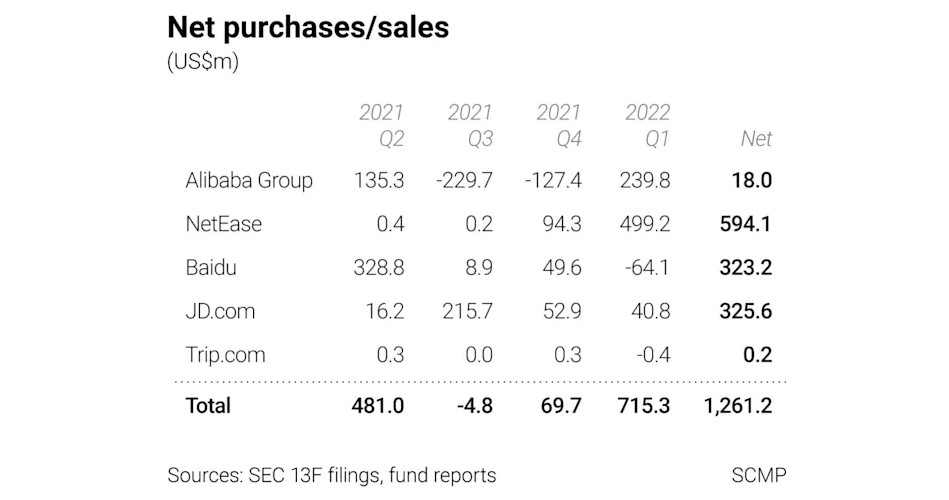 “We believe depressed prices for equities in China present compelling opportunities for long-term investors,” the managers said in a March report to investors. “Recent concerns about ADR issuance and US listings for Chinese companies [are] a red herring – almost all of the fund’s investments in China already have listings in Hong Kong and/or Shanghai and have the ability to adapt.”

Dodge & Cox, which oversees about US$369 billion of assets, runs its emerging markets fund through a seven-person committee which includes Sophie Chen, a former portfolio manager at Tiger Asia Management and an ex-analyst at JPMorgan Chase.

The firm declined to comment on its 13F filings and its specific stock investments, its spokesman Scot Hoffman said in an email on May 23.

Global funds chasing outsize returns in Chinese tech champions have suffered the brunt of a sell-off since China began an antitrust crackdown on Ant Group in late 2020. Subsequent attacks on internet-platform operators have caught investors by surprise, burning almost US$2 trillion of their market value in mainland China, Hong Kong and New York.

Dodge & Cox may have to bide its time for a major turnaround in Chinese tech stocks just to recoup its outlay. Its US$166 million Emerging Market Stock Fund, launched in May 2021 to bet on promising enterprises in developing nations, has lost 24 per cent since inception. The MSCI Emerging Market Index, with China as the biggest weight at 31 per cent, fell 23 per cent over the same period, according to Bloomberg data.

“Whilst some China funds have seen a pickup of inflows recently, overall I continue to see broad investor pessimism dominating investment considerations in this market,” said Martin Hennecke, head of Asia investment advisory at St James’s Place, a wealth management firm. The severity of the market rout left many investors shell-shocked, with a slowing economy adding to concerns, he added.

US-China geopolitical tensions, in addition to auditing and delisting spats, have prompted some analysts to suggest the Chinese tech sector has become “uninvestable” while state intervention in private Chinese businesses intensifies. Covid-induced lockdowns have also weighed on corporate earnings outlook.

“China’s political clampdown on internet companies, slower economic growth, and concerns about the property sector are all legitimate issues and have led to poor equity performance in China and Hong Kong,” Dodge & Cox said in its March letter. “Because of the size of China’s economy and its financial markets, it inevitably looms large in any emerging markets portfolio.”

Tech bulls are hoping a rally on Friday in Alibaba and peers in Hong Kong and New York will be the start of a turnaround. Given the extent of the sell-off so far, equity analysts at Goldman Sachs and JPMorgan Chase are reiterating their optimism on the upside as China injects more urgency in reviving its faltering economy.

A series of lockdowns since March, including in the main financial hub of Shanghai, has shut factories and upended supply chains. Premier Li Keqiang last week unveiled 33 growth measures, and demanded swift action from local authorities to restore growth and protect employment.

“The supportive stance towards the hi-tech industry by the Chinese government, as well as the negotiations with regard to the US-listed firms, are tailwinds for buying into hi-tech names,” said Wang Shenshen, a China equity strategist at Mizuho Securities. The slump “provides opportunities to buy on dips”.

If so, Dodge & Cox could have many bets going for it, especially in the US$49 billion mobile games sector. Apart from its indirect bet on Tencent through its key shareholder Naspers, the fund’s 200-odd picks included Wuhu Sanqi Interactive Entertainment Network, China’s third-largest mobile games publisher.

“After incorporating the changing regulatory environment and risk-reward outlook for the fund’s China internet holdings, we revisited our investment theses and reaffirmed our view that these remain attractive long-term investments,” the fund manager said. “Today, a collection of China internet companies is our largest thematic overweight position and represents a 5.5 per cent overweight versus the benchmark.”

Alibaba: Investment Of The Decade As Expansion Drives Growth