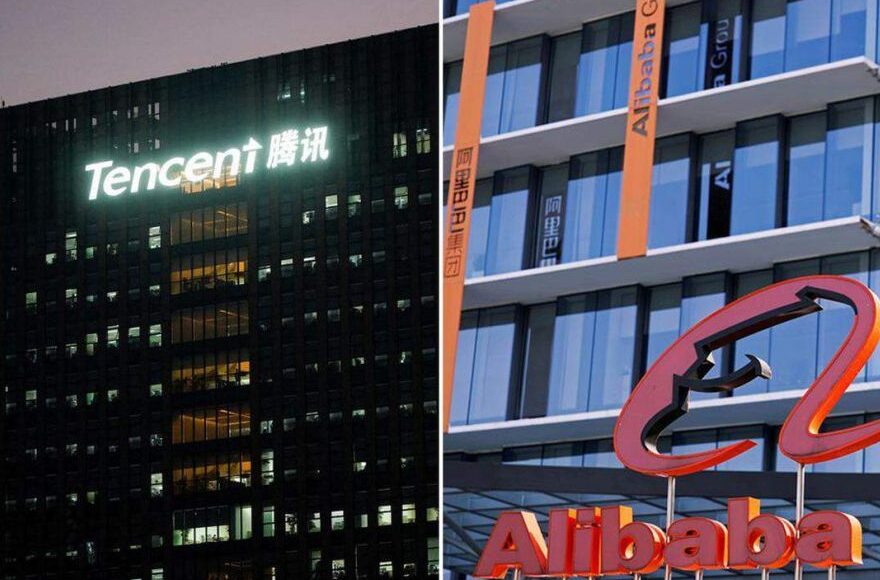 For years they were two of the fastest-growing companies worldwide — stock-market darlings worth a combined $1.7 trillion at their peak.

Now Tencent Holdings Ltd. and Alibaba Group Holding Ltd. are struggling to keep up with even the most staid utilities as China’s crackdown on internet giants takes its toll.

Tencent results on Wednesday are expected to show revenue rose by a mere 4.3% in the March quarter, while growth at Alibaba is projected at 7.1%. Both would be record lows and lagging the 8.6% average growth reported by the 10 largest utilities including Duke Energy Corp. and The Southern Co. last year.

It’s a remarkable turn of events for two corporate stars that once embodied China’s modern economic miracle, before Xi Jinping’s sweeping tech-sector crackdown forced the internet industry to cut staff, freeze investments into new arenas — even give away billions to social causes. The creator of WeChat, which has shed about $520 billion of value since its 2021 peak — could be hardest-hit after embracing what second-in-command Martin Lau calls a “new industry paradigm.”

China’s tech giants have made peace with a new era of caution and stricter government oversight. Venture capitalists are hitting the brakes on some of the country’s hottest internet trends like community buying, sounding the death knell for high-profile startups and squeezing valuations of others. TikTok-owner ByteDance Ltd. and online exporter Shein could postpone their stock-market debuts. All that has disillusioned investors who can no longer count on China Tech Inc. to drive their portfolios.

“There has been a fundamental shift in growth story for China tech in that the sector will focus on quality and sustainable growth, unlike the unconstrained growth in years past,” said Bloomberg Intelligence analyst Marvin Chen. “This may result in a downshift in revenue and user growth as companies become more conscious about how they go about user acquisition, M&A, and opening up their platforms to competition.”

Tencent’s latest quarterly print will offer clues on how the once free-wheeling sector is holding up as Covid lockdowns traumatize the world’s No. 2 economy. The market will also strain for hints on whether there will be a let-up in the pace of Beijing’s campaign.

Sentiment toward China’s internet industry has swung wildly in recent weeks, with companies including Tencent and Alibaba surging April 29 after China’s top leaders pledged to boost economic stimulus. The country’s top political advisory body plans to host a forum this week with private-sector firms including Baidu Inc. to discuss developing the digital economy, Bloomberg News has reported, as the ruling Communist Party makes stability a key priority ahead of its leadership reshuffle later this year.

Tencent has so far largely escaped direct scrutiny from Beijing — but not fallout from the broader clampdown.

Online advertising sales are forecast to decline about 15% after contracting for the first time in the December quarter — a hit that management signaled will persist for most of this year. Big marketers of past years including online tutors, insurers and game developers have all fallen victim to separate regulatory actions, while stricter user privacy rules took a toll.

The WeChat operator in the meantime is struggling to keep ByteDance at bay, whose hit app Douyin increasingly draws advertisers from Tencent. In April, Tencent shut down its game streaming platform and hiked fees for its Netflix-style service for the second time in about a year, to try and offset the hit. Regulators also banned minors from tipping on livestream platforms, echoing similar policies on online gaming.

As for its bread-and-butter games division — still the world’s biggest publisher — Tencent will need to wait a bit more for a resurgence.

Online gaming revenue is expected to grow just 4.9% — slowest in three years. Last month, China approved the first batch of new games since July, ending a months-long hiatus that put the $44 billion market on edge. Tencent and closest rival NetEase Inc. were not on the list.

Industry watchers expect them to be included in subsequent rounds, likely in the second quarter. Before that, Tencent will have to lean on aging titles like Honor of Kings and Peacekeeper Elite while accelerating bets on overseas markets, which now contribute about a quarter of gaming sales.

Then there’s the fintech and business arm, now Tencent’s No. 1 revenue driver. That division – which includes cloud services – is expected to expand 18%, down a tad from the prior quarter but still the only unit expected to post double-digit growth. A Covid resurgence in China, coupled with punishing lockdowns in cities like Shanghai and Shenzhen, could have delayed cloud projects and cooled transactions.

Regulators are now considering requiring Tencent to fold its WeChat Pay service into a newly established financial holding company, Bloomberg News reported in March, part of an overhaul of the fintech arm that could undermine its entire social media business. Tencent executives have stressed they are talking with regulators and will comply with requirements.

“The key share-price driver for the sector remains more on the policy side rather than company fundamentals,” Daiwa analyst John Choi wrote in a May 13 note. “As the market is increasingly focused on profitability, we believe companies are prioritizing efficiency gains over scale expansion, hence investors should be aware of slowing growth across the sector” in 2022 and 2023.