Alibaba’s sales outlook for the September quarter is eroding on soft China consumption, analysts including Alex Yao wrote in a note this week. JPMorgan lowered its target price for Alibaba’s US-listed shares to $135 from $145, marking the bank’s latest call on China’s technology stocks after switching its views several times this year.

“Alibaba’s weakening revenue outlook in the near term could continue to weigh on the share price despite an unchanged, or even potentially better, profit outlook,” the bank wrote in a research report. “We believe sentiment-driven fund flow is the current key share price driver and revenue recovery is the key determinant of market sentiment.” 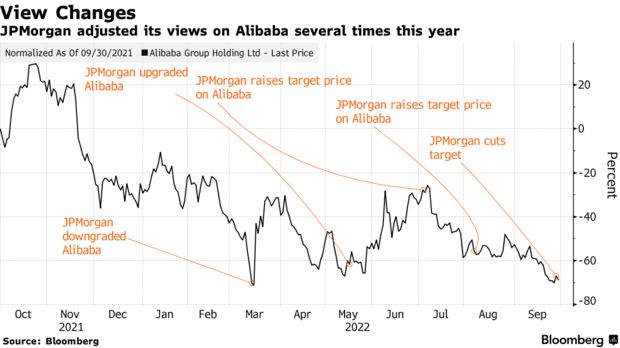 In mid-March, the JP Morgan shocked the industry and triggered broad selloffs after calling the sector “uninvestable” in a report that more than halved Alibaba’s price target. JPMorgan editorial staff in charge of vetting the bank’s research asked for that word to be removed before publication, Bloomberg reported. Since then, the bank has been lifting the company’s price target, and upgraded the sector in May on an improved regulatory environment.

An investor following Yao’s recommendations on US-listed Alibaba would have lost 67% over the past year, the worst performance among the analysts following the stock, according to Bloomberg-compiled data.

In the latest report, Yao and his team said macro headwinds in China may limit improvement in Alibaba’s core sales, given low visibility of a recovery in consumer sentiment and Covid policy relaxation. Customer management revenue, which accounts for a big chunk of its overall sales, may drop 4% on year in the third quarter following a 5% second-quarter fall, they added.