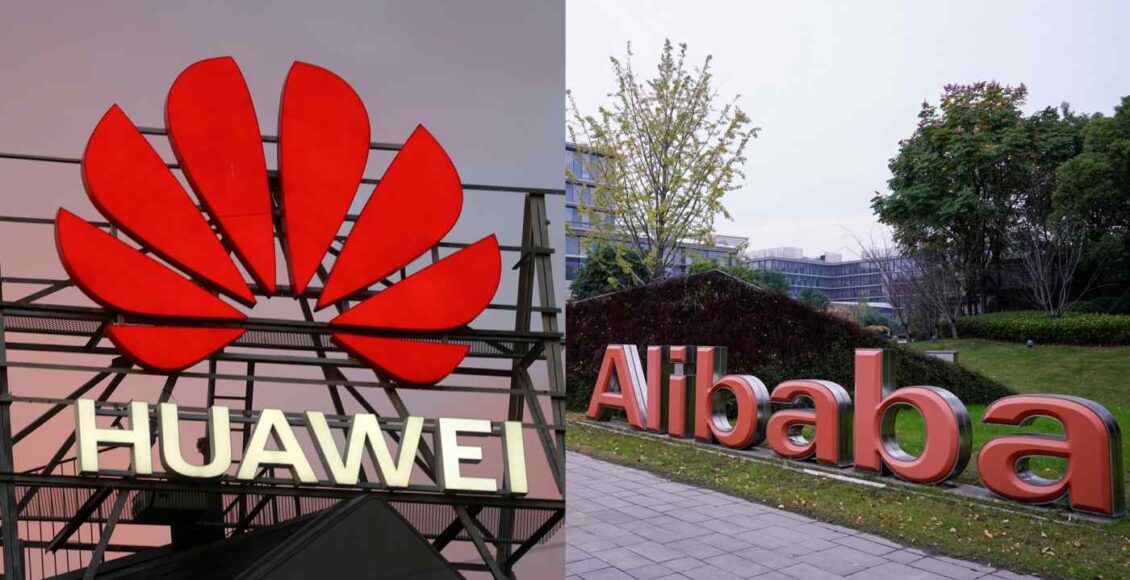 But both internet giants are now fielding a challenge from upstart Huawei, which is refocusing on the growing, lucrative market after its smartphone business was hobbled by U.S. sanctions.

With its sprawling reach, government support and famously gung-ho corporate culture, the tech giant is making a serious run at dethroning Alibaba, though becoming a service-focused company rather than a hardware provider presents its own hurdles.

Alibaba Group Holding had a 40.6% share of China’s cloud computing market in the fourth quarter of 2020, trailed by Tencent Holdings and Huawei Technologies, both with 11%, according to data from IDC.

That represents a sharp rise for Huawei, which just a year earlier was the sector’s No. 5 player with a share of 5.2%.

China’s market for third-party cloud services — the “public cloud” market — expanded nearly 50% in 2020 to hit about $19.4 billion, IDC data showed. That makes the country the second-largest market worldwide, with its 6.5% global share only topped by the U.S. And that global share is predicted to continue rising to hit 10.5% by 2024, IDC predicted.

The rapid growth of China’s public cloud market is partly due to the Covid-19 pandemic, as enterprises and government departments have shifted more of their operations online and boosted their spending on cloud services accordingly.

In 2020, Huawei’s enterprise group, which includes Huawei Cloud, reported revenue was up 23% to 100 billion yuan ($15.4 billion). Though the group didn’t offer a detailed breakdown of that figure, Huawei Rotating Chairman Hu Houkun said Huawei Cloud recorded revenue growth of 168% for the year.

The area has been a particular focus as the company has pivoted away from its former mainstay of smartphones since the U.S. began to slap stringent sanctions on the company in 2019, barring its access to the advanced chips needed to be competitive in that sector.

Selling services to companies, including cloud computing, doesn’t present the same demand for chips, so Huawei can stretch out the stockpile it built up before the sanctions intensified.

Huawei aims for its enterprise group to bring in $20 billion this year and $50 billion in 2025, Vice President Chen Banghua proclaimed in April.

The company’s double-footed dive into cloud computing was given added momentum by a survey Huawei conducted earlier this year. A total of 86% of polled company executives across a range of industries said that they would boost spending on digitalization initiatives in 2021, with a quarter saying that spending increase would top 20%.

Buoyed by the survey, company executives decided to go “all in” to develop Huawei Cloud and aim to surpass Alibaba Cloud before 2025, according to people familiar with the situation.

Huawei actually started out focusing on enterprises back in the 1980s, selling network gear and other hardware to companies, before expanding into consumer-facing markets.

That long history has given the tech giant an extensive business contact network, laying the foundation for its rapid expansion in cloud computing and giving it an edge over rivals that could last for years.

The experience of a salesperson who works for a Chinese cloud company explained Huawei’s advantage. When a regional bank based in western China put out a tender for cloud services, Alibaba was seen as just one of several bidders. On the other hand, Huawei already had a procurement relationship with the bank, and its salespeople were already acquainted with management.

Another edge Huawei has is political, as government departments and state-owned firms — some of the top spenders on IT services — are keen to be seen supporting a homegrown tech champion widely perceived to be the target of unfair U.S. suppression.

Huawei executives are regularly invited to closed-door events organized by state-owned enterprises in various sectors, where they are asked to share Huawei’s own experience with replacing U.S. tech, according to a person who works at a Huawei partner company.

Huawei’s dramatic advance has raised alarm at Alibaba and Tencent. Recent organizational restructuring at both companies reflects this.

In May, Tencent announced its biggest reshuffle in more than a year at its Cloud and Smart Industries Group (CSIG) unit. The changes emphasized the strategic importance of CSIG, with the group being granted its own CEO.

Among the biggest new appointments was Li Qiang, who spent almost two decades at German industrial software giant SAP. Li was made a vice president, in an apparent signal that Tencent wants to sell more cloud services to industrial companies, an area where Huawei has had a strong showing.

The month before Tencent’s shuffle, Alibaba announced a massive overhaul to its cloud service unit. One of the most notable moves was establishing 16 regional units, responsible for their own geographic sections of China and with wide decision-making autonomy.

This is designed to expand Alibaba’s reach and reduce red tape, according to people familiar with the matter.

The duo both have one significant advantage over Huawei — their hugely popular apps.

Alibaba’s work collaboration tool DingTalk surged in popularity during the Covid-19 pandemic in 2020 as workers at all sorts of companies used the platform as they made the shift to working at home.

The popularity of the DingTalk platform among enterprises give Alibaba an advantage, especially in the software-as-a-service (SaaS) and platform-as-a-service (PaaS) markets, two major parts of the public cloud market.

Chinese companies’ spending on PaaS and SaaS — platform and software offerings typically run on cloud infrastructure — is modest but gaining momentum. In 2019, PaaS and SaaS only made up of 28% and 6% of total public cloud spending, while infrastructure-as-a-service (IaaS) accounted for the other 66%, according to data from Chinese Academy of Information and Communication Technology. However, the year-over-year growth rate for PaaS and SaaS in that year was 92% and 67% respectively, far exceeding the 34% for IaaS.

Alibaba sales reps now respond to the needs of customers directly on DingTalk, and users are able to subscribe to Alibaba’s SaaS services without leaving the platform, according to Ye Jun, the head of the DingTalk Enterprise Group.

Tencent’s ownership of China’s most popular messaging app WeChat, which has more than 1 billion active users, means it is also well positioned to capture the growing PaaS and SaaS markets. Tencent now offers cloud-based communication tools to customers across industries.

To compensate for its weakness in this area, Huawei is leading with a collaborative strategy in the PaaS and SaaS markets.

The goal is to build up an ecosystem of partners. In May, Huawei unveiled an initiative to recruit partners into an alliance to target customers in a coordinated way across six key industries, including finance, manufacturing and retail.

Huawei is known for its tenacious corporate culture. Its decision to go “all-in” on cloud services will mean that it will develop the business by any means necessary, regardless of cost, company insiders said.

However, to achieve the goal of surpassing Alibaba, Huawei has serious battles to flight. Perhaps, the most daunting task is to transform itself from a hardware seller to a service company.

This difficulty is well highlighted in a series of its own restructuring initiatives announced in the past year.

To the surprise of many, Huawei said in April it was splitting its core cloud and artificial intelligence business group into two after only 14 months of operations. Huawei also announced the head of the cloud unit, Richard Yu, would step down only after three months in the job.

Another big challenge is the lack of talent and expertise. Many of Huawei Cloud’s employees were transferred from units responsible for research and development and hardware sales. Software sales are very much a different kettle of fish, said an industry expert who works for a Huawei partner firm.

The most notable difference is the extra presale process for software sales, which require sales representatives to test the product in the customer’s environment, providing a “proof of concept.” Huawei has a shortage of workers able to pull off this presale step, and it is now launching a recruitment frenzy, according to the expert.