Alibaba’s 40 price downgrades, US$1.2 trillion tech wipeout show no one knows the bottom as China’s regulatory tentacles snare all

After a US$1.2 trillion wipeout in July, no one quite knows where the bottom of the market is when it comes to Chinese technology stocks traded in the US, Hong Kong and mainland China markets. Meanwhile, a lone bear has emerged with a sell rating on Alibaba Group Holding and Tencent Holdings.

Analysts from at least 15 brokerages – from UBS Group and Goldman Sachs to Citigroup, Oppenheimer and CLSA – have slashed their price targets for Alibaba by at least 40 times since early November, when Chinese authorities abruptly foiled Ant Group’s blockbuster stock offering and slapped a record US$2.8 billion antitrust fine on the e-commerce giant.

Alibaba’s American depositary shares (ADSs) recently traded at about US$196 in New York, or 15 per cent below their 12-month target of US$230 from the least bullish of 53 analysts with a buy recommendation, according to data compiled by Bloomberg. It is also 28 per cent below the market consensus. 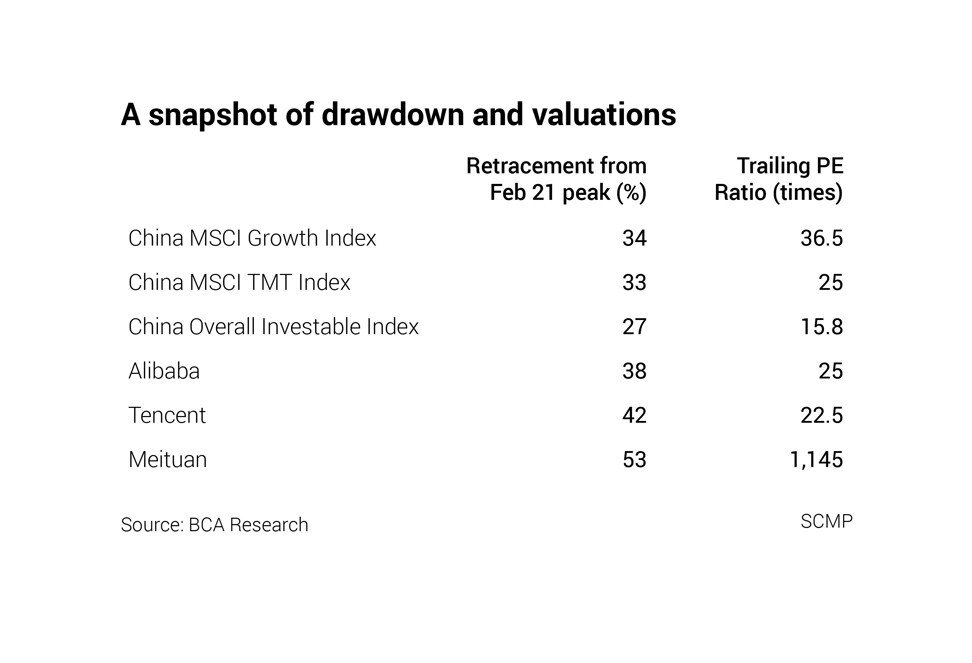 The picture is the same for Tencent, which together with Alibaba, the owner of this newspaper, and Meituan make up the triumvirate coveted by global money managers as recently as a year ago. These stocks are now probably labelled “buy at your own peril”, after investors lost a fortune with China’s regulatory tentacles reaching every nook and cranny of key industries, snaring giants and minnows alike.

“No way [to predict where the market bottom is],” said Hong Hao, managing director with Bocom International Holdings in Hong Kong. “There is no way to quantify. Policies are subjective.”

China’s regulatory crackdown was baked into its 14th five-year plan, according to BCA Research, underlining a sociopolitical and economic shift from speedy wealth accumulation to correcting income inequality and excessive private-sector profitability. This transformation, it added, was not transitory.


SCMP Explains: China’s five-year plans that map out the government priorities for development

“These companies will experience weaker profit growth and lower profitability relative to the past due to disruptions to their business models,” said Arthur Budaghyan, chief emerging markets strategist at Montreal-based BCA Research. “It is impossible to know what the long-term revenue and profit growth rates will be.”

China’s focus on wealth distribution and fixing excesses in its market economy has galvanised multiple regulatory agencies, from banking and insurance to cyberspace, antitrust and stock listing supervision, to name a few, into action and it is almost impossible to predict where the next move will come from. Morgan Stanley, for instance, sees no precedent to fall back on.

“We expect a longer and more profound impact from the current regulatory cycle on China’s equity market valuations and equity risk premium than has occurred in similar past cycles,” the US investment bank said in a report to clients on August 1. “There is a substantial degree of uncertainty over what this means both for future net income margins and revenue growth for the affected sectors and stocks.”

Ray Dalio, the founder of Bridgewater Associates, the world’s biggest hedge fund, and arguably the biggest China stock bull, has asked investors and free-market capitalists to focus on the long term. China’s current regulatory clampdown may just be a speed bump along its four-decade-long path to market reforms.

It was unclear how Bridgewater fared during the July sell-off. The hedge fund’s top long holdings on March 31 included the ADRs of Alibaba, Pinduoduo, JD.com, Baidu, NIO and KE Holdings, according to filings with the US Securities and Exchange Commission. These stocks have lost more than US$150 billion in market valuation over the four-month period since then, Bloomberg data shows.

Japan’s biggest brokerage, Nomura Holdings, which cut the price target for Alibaba’s ADSs four times from US$361 to US$251, said investors in mainland China and Hong Kong were turning constructive on technology stocks. They should emerge stronger when the storm recedes, it added.

Investors looking to buy dips or call the trough may have to look at the bigger market trend and tread with caution. The MSCI China Investible Index, a gauge of 293 members with US$1.4 trillion in capitalisation, was only knocked back to its June 2020 level, even after the recent slump in telecommunications, media and technology (TMT) stocks.

“The parabolic rise in Chinese TMT stocks from late 2020 and early 2021 reflected a euphoria that typically occurs at the end of a major bull market,” BCA’s Budaghyan said in a report dated August 5. “Hence, the February peak in these equities could mark a major top. If so, these stocks are unlikely to embark on a sustainable bull market any time soon.”

Manuel Muehl, an analyst in Frankfurt at DZ Bank, is currently the only bear among analysts who track Alibaba and Tencent. He lowered Alibaba to a sell last month with a price target of US$196, according to Bloomberg data. He also reduced Tencent to sell with a target of HK$490, compared with a market consensus of HK$724.55, leaving both stocks with no upside.

Muehl did not immediately reply to emails seeking comment on his downgrades.

The market may only hope to see a pattern of consolidation in Hong Kong stocks this month, said Wei Wei, an analyst at Ping An Securities. “Policy unfriendly internet stocks still need to be shunned,” he said. “It’s hard to say that stocks have already halted their declines.”