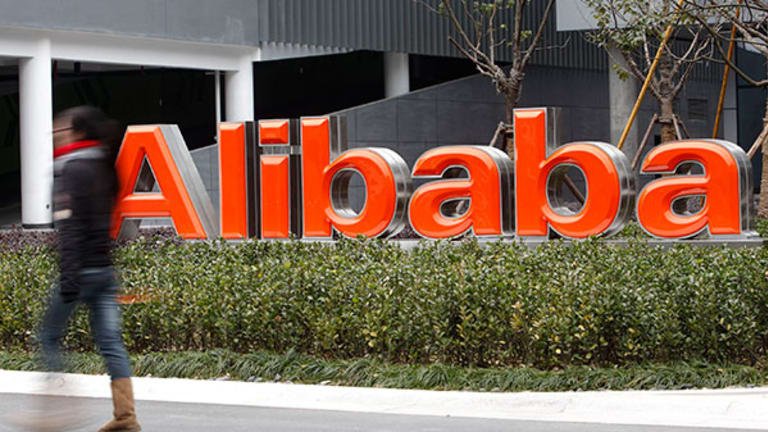 “Be fearful when others are greedy, and be greedy when others are fearful,” Warren Buffett once said. Well, I see a great deal of greed in the stock market today. Just look at stocks like NVIDIA, Tesla, and other ultra-high multiple names, trading at arguably absurd valuations, hitting new high after new high, seemingly day after day. Optimism has no limits relative to such stocks, and valuations seem to have no bounds.

On the other side of this equation, we have Alibaba, a company that’s been trampled on relentlessly over the last twelve months. Yes, the company is going through some transitory difficulties, but this period will likely mark the low point in Alibaba’s existence. Furthermore, it looks like Alibaba just delivered its “kitchen sink” quarter to investors.

Alibaba’s stock is now trading at a rock bottom 13.5 times next year’s revised consensus EPS estimates. Poor sentiment is smashing future expectations and has hammered the stock price to its lowest levels in years. However, while Alibaba has underperformed analysts’ expectations in past quarters, the company could start to outperform once again soon.

As Alibaba’s situation improves, the dynamic should lift sentiment and reinvigorate demand for Alibaba’s stock. Alibaba is one of the most compelling growth/value opportunities in the stock universe. As the company’s earnings stabilize and begin to move higher, the company’s stock price should appreciate considerably as well.

Here Is What Poor Sentiment Does To A Stock 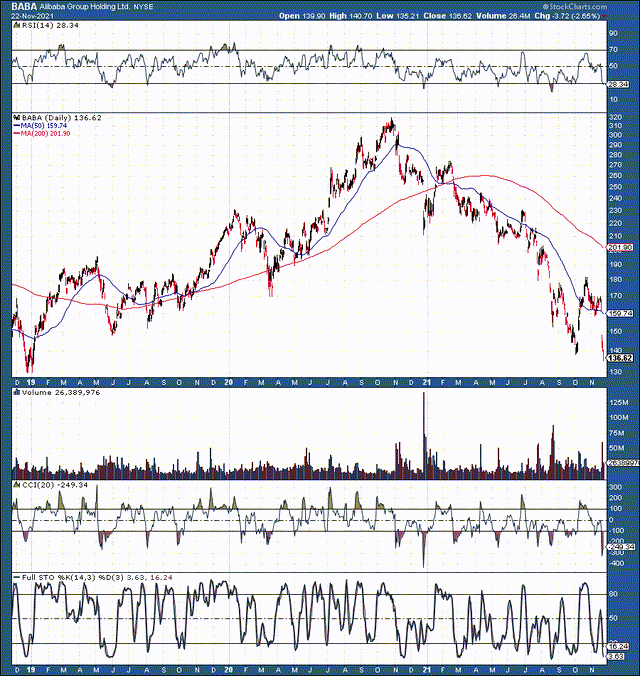 Here we see the devastating effect that poor sentiment has had on Alibaba’s stock. We’ve witnessed more than $400 billion worth of market cap melt away since the company hit an ATH roughly a year ago. Now the stock is highly oversold technically, trading at levels last seen nearly three years ago during the growth scare in late 2018.

I want to point out that back in late 2018, Alibaba’s TTM EPS were $5.14 relative to $9.33 now. If we go by TTM earnings, Alibaba’s current P/E ratio is at 14.64, which is remarkably cheap for a dominant, market-leading company capable of delivering substantial revenue and EPS growth in future years.

Why Sentiment Is This Poor Right Now

Well, we’ve seen several detrimental factors materialize this year. In fact, this has been the worst year for Chinese stocks that I can remember. Increased Chinese government (“CCP”) regulation, the Ant Group IPO controversy, Alibaba’s multi-billion-dollar fine, U.S. regulations, the hedge fund blow up, and a decrease in earnings all contributed to the soured sentiment surrounding Alibaba. In addition, Alibaba’s earnings and growth projections have been impacted due to the numerous factors plaguing the company over the past year. Given all these negative variables, a decline in growth and earnings projections, and negative sentiment, it’s not a surprise that there is so much blood in the streets right now.

Alibaba missed top and bottom-line estimates in its fiscal 2022 Q2 earnings report. The company’s EPS came in at $1.75, missing consensus figures by 19 cents, and revenues at $31.43 billion, missing consensus figures by roughly 2%. While revenues surged by 29% YoY, the EPS figure illustrated a 38% YoY decline. Moreover, the company guided to (fiscal 2022) 20-23% revenue growth relative to the previously expected 29.5% growth prospects. Naturally, the worse than anticipated results did not improve investor sentiment, and the stock took an additional leg lower.

Not Everything Is As Bad As It Seems: Q2 Highlights 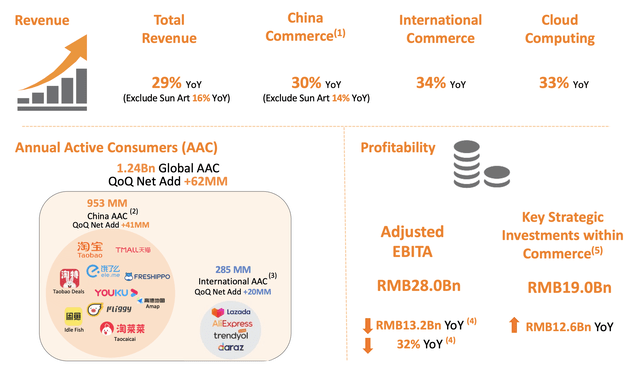 Despite the worse-than-expected headline numbers, not all is as bad as it seems at Alibaba. Total revenues grew at 29%, with 16% organic growth once the Sun Art acquisition was discounted. International commerce and cloud computing showed robust growth, 34% and 33% YoY gains, respectively. Annual Active Consumers (“AAC”) grew to nearly 1.25 billion, an increase of about 62 million users in the quarter. Perhaps most importantly, while we saw adjusted EBITA fall almost 32% YoY, we saw vital strategic investments within commerce rise by a similar margin within the quarter.

This dynamic implies that the earnings decline at Alibaba is a transitory phenomenon and is in part due to increased investment and business optimization processes. Moreover, the company’s profits were further impacted by losses due to the company’s investments in equity of publicly traded companies and the ongoing volatility in China’s markets. Therefore, I believe that the current turbulence in Alibaba’s earnings is a transitory phenomenon and this period likely marks a low point in the company’s existence.

What To Expect Going Forward

Now, earnings revisions have been substantial in recent months. Consensus analysts’ estimates no longer point to $12 or $13 EPS for next year. Instead, consensus EPS have been lowered to just $10 for next year, which places Alibaba’s forward P/E ratio at only 13.5.

It looks like that the fear here is that estimates could fall even further, but I think that the probability is very low. Again, I believe that we just saw Alibaba’s kitchen sink quarter. Moreover, sentiment, estimates, and Alibaba’s P/E ratio are at rock bottom, and they are very likely to rise from here.

Due to the ongoing controversy, consensus revenue estimates have also been reduced dramatically in recent months. Nevertheless, Alibaba should continue to deliver substantial revenue and earnings growth from here. Consensus analysts’ estimates have a higher probability of being too low here than being too optimistic at this point, in my view. Despite its transitory issues, Alibaba remains a dominant, market-leading company with significant growth potential. Oh, and yes, it’s trading at a ludicrous low valuation of 13.5 times (lowered) forward consensus EPS estimates. We are near a point of maximum fear and pessimism for Alibaba’s stock here, and this is why the optimal time to buy is probably right now when there is blood in the streets.

Here’s what Alibaba’s growth, valuation, and stock price could look like in future years:

While I am bullish on Alibaba, various factors could occur that may derail my expectations for the company. For instance, the CCP could clamp down further on Alibaba and other Chinese tech giants. Moreover, U.S. regulators could decide to delist the company’s ADR shares. Increased competition could impact Alibaba’s growth and profits. The company’s growth could be worse than my current anticipation. Also, Alibaba’s profitability could continue to struggle for various reasons. There are multiple risks to this investment, which is why shares are very cheap right now. In my view, Alibaba remains an elevated risk/high reward investment, and investors should carefully examine the risks before opening a position in Alibaba stock.