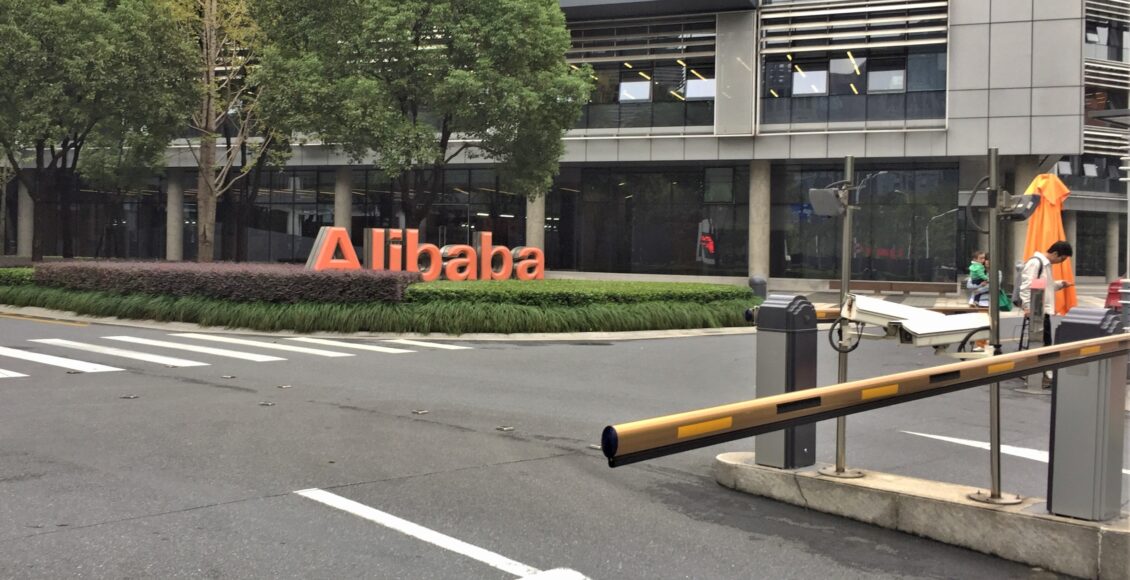 Why the Stock Sank

It’s been hard to miss the story of Alibaba’s rapid fall. Over the past six months, Alibaba’s share price has fallen by nearly a third. The most recent blow was its Q1 earnings report, in which the company reported a roughly $800 million loss, its first-ever as a public company. The loss occurred after the Chinese government fined the company nearly $2.8 billion for antitrust violations.

The market reaction to the earnings report, and more specifically the hefty fine, is the culmination of months of investor fears since former CEO Jack Ma’s abrupt withdrawal from the public eye. Ma’s disappearance shortly followed his criticism of Chinese financial regulators in October. In the months since, China opened and concluded an antitrust investigation into Alibaba, a case which had its own merit but was likely also intended to punish Ma for his words.

Investors worry that China’s hard line on both the company and its key personality will spell the end of Alibaba’s impressive performance up to now.

Why BABA is a Buy

Aside from China’s hefty fine, which is nothing to gloss over, sentiment and speculation have been responsible for driving BABA’s stock down. That said, the company’s numbers still look great.

Warren Buffet’s classic counsel comes to mind. To paraphrase, the stock market measures sentiment in the short run and real value in the long run. To truly weigh the company, we should look first and foremost at its financial statements and competitive performance. Before that, let’s address the fears that have pushed BABA down by nearly a third since October.

Jack Ma’s abrupt vanishing act in late 2020 was the start of Alibaba’s problems. However, Ma’s disappearance, while troubling from both a moral and practical standpoint, did not visibly harm the company beyond the fine in Q1. In fact, Ma had already stepped down as Alibaba’s chief a month before he made the comments.

There is no doubt that the fine was substantial, but it is worth remembering that it represents just over 2% of the past year’s revenue. When put in this perspective, it is impressive that a $2.8 billion fine brought down the company’s valuation by nearly $40 billion after it was announced.

It is hard to imagine such a reaction in Alibaba’s boardroom. The Chinese government finally issuing a punishment has likely been met with feelings of catharsis and permission to move on for company leadership. The band-aid has been ripped off. The waiting, speculation, and fear are over. Importantly, Ma is back.

For those who believe that Jack Ma is Ali Baba’s lynchpin, recent news of his reappearance should allay their fears a bit. Ma recently attended, with a low profile and beer in hand, an annual teambuilding event at the company’s Hangzhou headquarters. He appeared his usual affable self, and there are no signs that China intends to pillory him indefinitely for his sins against the party.

Judging by the close timing of Ma’s casual reappearance and the hefty fine, the message from the PRC seems quite clear; Even the most powerful will pay a heavy price for defiance, but the matter is settled. Jack Ma is out of time-out, and the punishment fits both crimes of monopolistic practices and complaining about the government, at least by CCP standards. The company can ostensibly return to its status as an industry darling, in mutual benefit with Chinese leadership.

Aside from the Chinese fine, it is hard to find solid, PwC-audited numbers to explain BABA’s sharp fall over the past six months. Such numbers should prove a much better barometer of the company’s health today, and predictor of its future. When analyzing its income statements and cash flows, a different picture is painted than the current sentiment would suggest.

The company grew every segment of its business by double digits year-over-year. Its revenue from secondary offerings, such as cloud computing and international retail commerce, grew 37% and 77% respectively. Its net operating cash flow over the past 12 months is roughly $35 billion. It is sitting on a war chest of about $50 billion in cash, and its current ratio is double the NASDAQ average. These figures reflect solid, balanced growth during a pandemic. 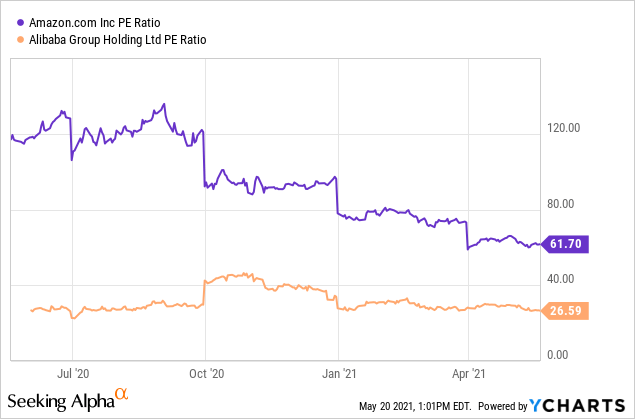 Compared to its overseas twin Amazon, Alibaba trades at a compelling valuation on nearly all relevant metrics. Here, the company trades at a P/E ratio of just 26 times, which is less than half of Amazon’s current P/E. The company’s both have comparable growth rates and gross margins and operates in pretty much the same segments.

As demonstrated, Alibaba has seen the highest revenue growth of the bunch over the past three years and has the lowest PE ratio. The last column helps to illustrate the vast discount at which BABA is currently being sold. It’s true that some of the other companies have shifted their focus toward profitability rather than break-neck growth, but the fact remains that Alibaba stands out as by far the cheapest tech giant shown in terms of growth and earnings.

The China Challenge- Real but Embellished

Alibaba presents a metaphor to the American investor for all the risks and temptations that come with betting on a Chinese tech company. The company boasts a dominant role in an enormous market, with international expansion to keep core operations growing for years to come. Furthermore, despite what could hardly be called a wrist-slap of a fine, it has the backing of the PRC. China does not want to see Alibaba lose to foreign firms, fail, or fall behind. At the end of the day, no matter how harsh the rhetoric or how manhandled the moguls, China wants Chinese firms like Alibaba to win.

Alibaba received the wrath of the Communist Party and no one, from the American investor to the competing Chinese firm, will soon forget it. However, the flipside to the PRC’s heavy involvement in its tech industry is that the government will never let a huge, powerful tech company fall too far. In short, China sabotaging Alibaba is a needless worry. The more reasonable concern for the American investor is the restriction of capital flows between the two largest economies.

Though not huge, the most significant risk to Alibaba’s performance for American shareholders is the growing potential for an economic decoupling between the US and China. Both rhetoric and action between the powers reached a fever pitch during the Trump Administration, characterized by tougher language, restrictions on some Chinese companies, and rising tariffs. President Biden has shown mixed signals on the issue, moving to reduce tension in some areas and girding for more confrontation in others.

Alibaba has continued its track record of solid operating performance, growing at an impressive clip and maintaining robust profitability in its core business. However, its share price has fallen considerably over the last six months on negative headlines, the most recent being a hefty fine from the Chinese government. That being said, risks remain to share price performance. The most significant risk to the American investor is the US restricting investment in Alibaba due to security concerns, as we saw with companies like Xiaomi last year.

US-China relations: is there still a trade war under Joe Biden’s presidency?