Just a little over a year ago we discussed Alibaba in an article titled: Alibaba: Is The Reward Worth The Risk?

In that piece we concluded:

on one hand, BABA appears to be a slam dunk strong buy with all the blocks checked… On the other hand, Chinese regulators’ hands are all over this company right now and we are unsure if there are any more major blows headed BABA’s way. Furthermore, its founder has fallen from grace in Chinese society just as e-commerce competition is increasing in the country. Meanwhile, management is not exactly voicing significant confidence in the stock by failing to buy back meaningful sums of shares and geopolitical risks from China’s emerging demographic crisis and increasingly bellicose rhetoric and collision course with the U.S. and its Asia-Pacific allies only heighten the investment risks here…we feel uncomfortable holding the stock ourselves given that the risks are of a nature that we cannot justify or fully quantify.

While we rated the stock a Hold at the time, our caution and aversion to buying and holding the shares ourselves paid off as the stock price has more than halved since then while the S&P 500 (SPY) has been flat and our portfolio has soared by ~20% over that span: 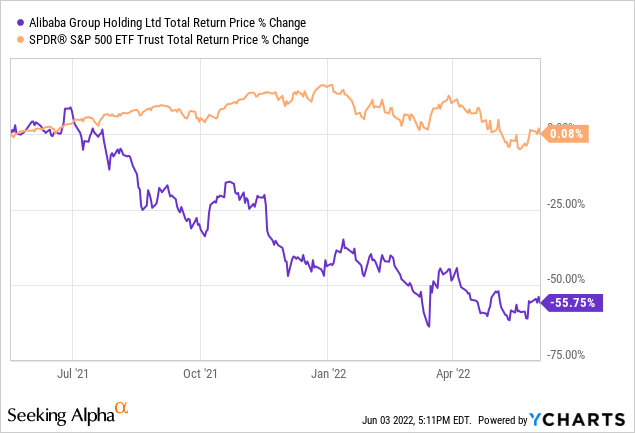 In this article, we will revisit what has changed in the investment thesis over the past year and re-assess whether an investment in the stock makes sense right now.

While BABA is still posting solid top-line growth numbers (18.93% growth over the past twelve months), the bottom line (earnings per share) took a terrible tumble over the past year (-19.13%):

This topline growth rate is particularly impressive considering that China imposed some severe COVID-19 lockdowns on leading economic centers like Shanghai during part of this period. In its most recently quarterly release, BABA announced 8.9% year-over-year revenue growth despite facing major lockdown headwinds over this period and having massive tailwinds in the year-ago period that already made it a tough quarter for comparables. That shows just how resilient the growth engine is for this company.

The underlying fundamentals for supporting continued long-term growth remained sound as well. Particularly encouraging is the fact that over the past year BABA has grown its Chinese user count by ~10% and its international user count by a whopping 25%. Given that ~70% of its current user base is in China, growing the international business aggressively while sustaining a solid pace of growth domestically bodes very well for near term and long-term growth in the business. It is also a very positive sign for the strength and durability of the company’s moat, which primarily rests on the size of its network effects, economies of scale, and consumer database which enable it to outcompete other major ecommerce giants for getting and retaining the best merchants and customers while still enjoying at least some pricing power.

Another recent positive development for the company was the China State Council May 31 release of official measures that it plans to take in order to aid an economic recovery in the wake of severe COVID-19 lockdowns. In fact, on the recent earnings call, BABA management stated:

Recently, the Chinese government has released important policy signals on its commitment to stabilize the economy and the job market in response to COVID impacts. They have also issued clear statements on promoting the development of internet platform economy through a healthy, regulatory environment.

Yesterday, the State Council held a national meeting to mobilize the implementation of several economic policies…We look forward to the introduction and implementation of policies that will enable the Internet platform companies to contribute more towards stabilizing the market, creating jobs and furthering high quality development of China economy…we’ve seen that the government has been coming out with various policies lately aimed at stabilizing the economy, stabilizing employment, ensuring the provision of essentials to people, including yesterday a very important national meeting convened by the state council to implement measures in six different areas, several of which are highly relevant to the business of Alibaba including stimulating consumption, ensuring the provision of essentials and achieving supply chain recovery; so that’s all highly relevant to us.

On top of that, several metrics paint a picture that recovery is on the way in China:

That said, not all trends and developments are positive. The simple fact of the matter is that this past year was a very rough one for BABA and that the full economic destruction caused by the past few months of lockdowns has yet to be quantified and ongoing zero-tolerance for COVID-19 policy from the Chinese Communist Party leaves a lot of uncertainty hanging over the economy.

Some specific examples of how BABA has taken a beating over this past year include:

While the network and scale of the company did improve over the past year, its pricing power and the macroeconomic conditions in which it is operating seem to have declined meaningfully over that period.

Fortunately, BABA’s balance sheet remains in great shape despite taking on a roller coaster year. It has retained its A+ credit rating with a stable outlook from S&P, reflecting little to no concern about its solvency. The company’s latest quarterly filing indicated that cash and short term investments on the balance sheet have remained relatively flat over the past year at $71.8 billion. Meanwhile, long-term debt has only increased slightly to $20.9 billion, leaving the balance sheet in a very conservative position, especially when taking into account their EBITDA/Interest coverage ratio of 28.7x.

Is The Stock Still Dirt-Cheap?

We thought BABA looked cheap a year ago and – after losing more than half of its value over the last twelve months – it is even cheaper today, especially when comparing it to its nearest American peer (Amazon). It currently trades at 9.53x on an EV/EBITDA basis whereas AMZN trades at 17.23x on the same metric. Its forward price to earnings ratio is a mere 13x whereas AMZN’s is 70.42x. On a price to free cash flow basis, BABA is priced at a very reasonable 15.84x compared to AMZN’s lofty 45.39x multiple.

Three other big indicators that BABA might be a compelling buy here are:

While the case for undervaluation and long-term growth remain compelling, so does the bear case. In addition to the aforementioned challenges facing the business at present, BABA continues to face:

On top of that, the stock price looks extremely cheap on both an absolute and relative (to AMZN) basis and Ray Dalio’s bullishness on the stock and management’s fairly aggressive share repurchase activity back that conclusion up as well.

However, its pricing power appears weak in the face of stiff competition and its equities investment recently took a hit, leading to a record loss for the company this past quarter. On top of that, leading bullish investor Charlie Munger appears to have lost some of his conviction as has a highly respected hedge fund manager. Last, but not least, the full impact of the COVID-19 lockdowns remains uncertain and geopolitical risks both inside and outside China have never been higher.

While the fundamentals look sound here and the price is dirt cheap, the risk associated with the Chinese Communist Party is so high and potentially completely devastating with many paths that could lead to horrible outcomes for BABA. Ultimately this investment feels too much like playing Russian Roulette to be considered anything but highly speculative. As a result, we remain on the sidelines and are instead taking advantage of numerous high conviction opportunities found among quality inflation and recession resistant business paying high dividend yields.

China eyes stable growth with an ‘around 5.5%’ GDP target in…