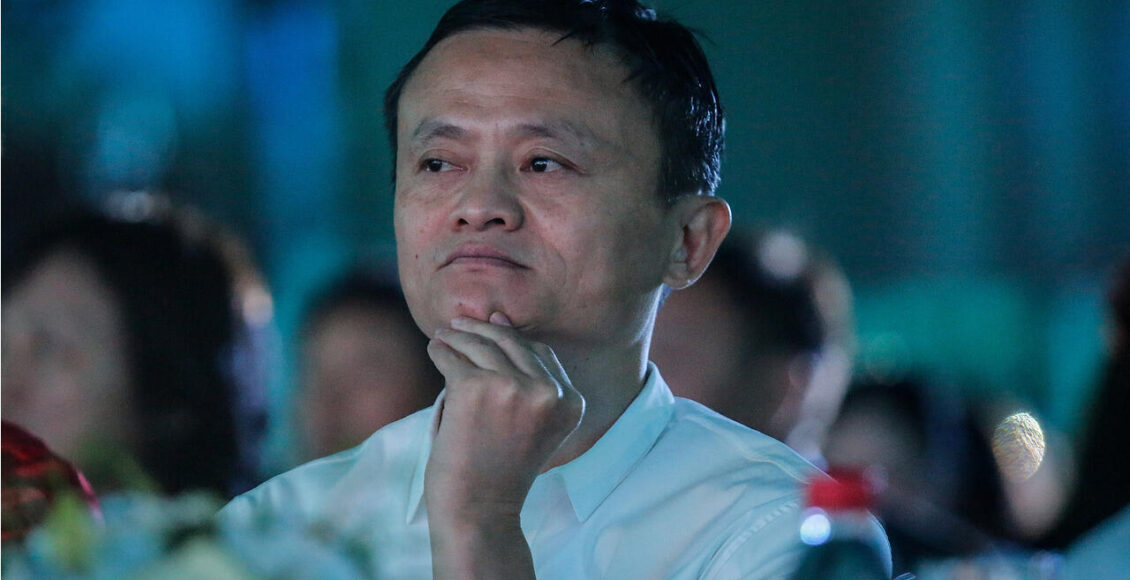 Alibaba can’t stop falling. Sure, there’s the occasional rally here and there, but they have proven short-lived and have done little against the persistent downward trend that the stock has taken. The stock is now trading 50% below levels just a year ago – more than representing “crash” levels. The falling stock price has less to do with fundamentals, which remain very strong, and more to do with investor hesitancy with Chinese stocks in general. BABA appears deeply undervalued even before accounting for the cash and equity investments on its balance sheet, but do shareholders really have claim to earnings? Depending on your risk tolerance, BABA might present either huge potential or extreme risk.

BABA has fallen more than 50% from all-time highs reached late last year, and is now trading just under $160 per share: 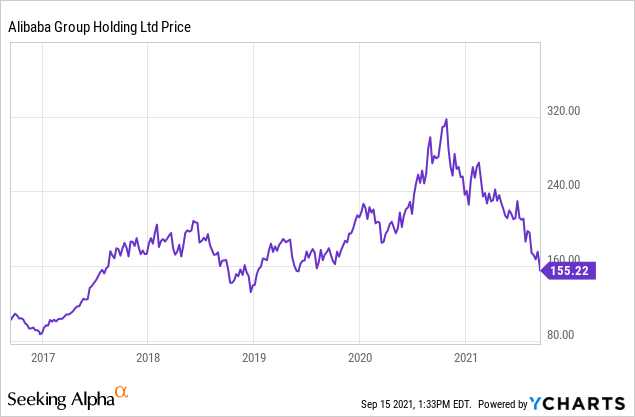 At recent prices, BABA is now trading at essentially the same price that it did more than four years ago. This stock performance may befuddle fundamental-based investors, as BABA has generated outstanding growth over the past five years: 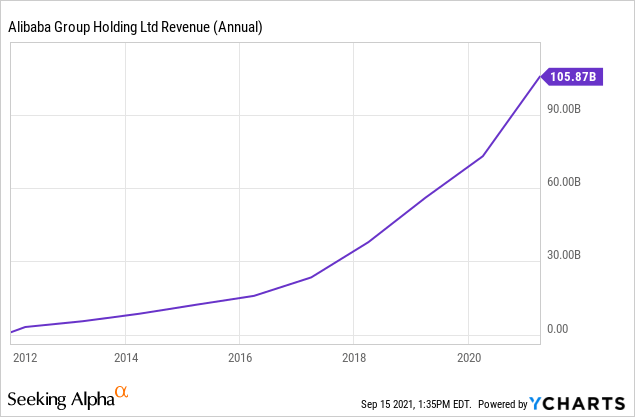 Why Did Alibaba Stock Drop?

There are many potential reasons why BABA has fallen. Certainly, it is not because the company generated 34% year over year (‘YOY’) revenue growth in the latest quarter, and it also isn’t because the company grew non-GAAP net income by 10% as well. It also isn’t because the stock was overvalued – at recent prices, the stock is trading at 15x annualized non-GAAP earnings. Even if it moved 100% higher, near where it traded prior to this crash, the stock would be trading at 30x earnings – arguably still far too cheap for a company with 34% top line growth.

Instead, the issues were due to a nasty chain of events sprung about by regulatory issues. BABA has been facing increased scrutiny by the Chinese government ever since BABA co-founder Jack Ma spoke negatively about the government. Despite Ma’s apology earlier this year, BABA has faced regulatory backlash including the blocking of its planned IPO of Ant Financial and more recently, the proposed breakup of that company. This breakup would include making the Chinese state a part owner in the business. In addition to these developments, BABA has also been required to make a $15.5 billion USD investment to “promote common prosperity” in the country.

After many years of being comfortable with the risks associated with the variable interest entity (‘VIE’) structure, American investors appear to finally be spooked. The recent developments appear to suggest that, in spite of BABA’s strong fundamental undervaluation, shareholders do not have ultimate claim on the underlying earnings. Many American institutions have been selling off their Chinese stocks – including famed investor Cathie Wood who at one point dumped most of her Chinese holdings. If you were waiting for a “blood in the streets” moment to buy Chinese stocks like BABA, then this is as much blood as anyone can tolerate. But is this really a good time to buy BABA?

Wall Street remains bullish as ever, with a 4.69 rating that leans “very bullish.”

My Seeking Alpha colleagues are less enthused, but still in general bullish:

The average Wall Street price target of $272.68 represents 75% upside from current levels, but as discussed earlier, even that would appear to understate the intrinsic value of the company.

Is BABA Stock A Buy, Sell, or Hold?

What are my thoughts? If this was just a fundamental story, then the decision would be an instant call to the affirmative. BABA is projected to increase earnings at a rapid rate over the next five years and is now trading at less than 8x estimates for fiscal 2026 earnings.

Using a price to earnings growth ratio (‘PEG’) of 1x-2x, I’d expect BABA to trade at 24-48x 2026e earnings, which would equate to upside of 213% to 527% over the next five years. We don’t need to calculate the average annual return to know that this would be a highly satisfactory result. Yet those estimates appear too conservative, as they imply minimal operating leverage as compared to revenue growth:

Yet I remain unconvinced for primarily one reason: lack of stock buybacks. BABA recently announced that it was increasing its stock buyback program from $10 billion to $15 billion. BABA has repurchased $3.7 billion of stock this year – but it has generated more than $10 billion of non-GAAP net income this year. While some of the retained cash flows were used to make strategic investments that maybe could be argued to be a good use of capital, BABA has been mostly hoarding cash. Over the last five years, cash has grown from $33.9 billion to $72.9 billion. Equity investments have increased from $19.9 billion to over $70 billion.

This is a good moment to note that the discussion of valuation hasn’t even accounted for the net cash and investments on the balance sheet, which in total equate to around 30% of the current market cap. Yet how many shares have BABA repurchased over the past five years? BABA has generated a cumulative greater than $100 billion of operating cash flow in the last five years, but has repurchased less than $2 billion of stock outside of this year’s repurchases.

I have previously been vocal about the red flags that this sends: why would BABA think that hoarding cash would be a better use of capital than repurchasing its stock, which has been tremendously undervalued for the greater part of the last five years? That suggested poor capital allocation philosophy and/or shareholder misalignment. But now, a new concern emerges: if the cash keeps hoarding on the balance sheet, is there risk that the Chinese government takes that away from shareholders? The recent $15.5 billion “investment” means that there is now a precedent. BABA is trading very, very cheaply based on the fundamentals, but one could make the argument that the fundamentals matter very little if the capital will never make it to the hands of shareholders either through dividends or material share repurchases.

I could see the argument for buying BABA as a potential trade idea, but I continue to avoid endorsing the stock as a long-term investment due to the regulatory risk. Barring a complete implosion of US-China relations, one could also make the argument that there isn’t much downside from current levels, as there likely will always be investment interest in BABA due to the apparent undervaluation and strong forward growth potential. Whether or not one decides to invest in BABA at these levels depends less on fundamentals and more with their personal risk tolerance. For yours truly, the perceived risk is so much that I have to pass on this name in spite of the fundamentals pointing towards a potential near-term doubling or more.