A consortium led by Alibaba Group Holding Ltd., has emerged as the frontrunner to take over Tsinghua Unigroup Co., a deal that could fetch more than 50 billion yuan ($7.8 billion) to help keep China’s indebted chip champion afloat.

The Chinese central government is leaning towards the Alibaba-led offer given the e-commerce giant’s financial heft and the potential synergies with its own cloud and semiconductor business, people familiar with the matter said. The consortium, which includes funds backed by the Zhejiang government, is edging out several competitors for Beijing-based Unigroup, several other people said, asking not to be identified as the information is private.

A successful deal could help avert one of China’s biggest potential corporate failures, while securing for Alibaba valuable chip know-how and a supply of semiconductors to fuel the country’s largest cloud computing platform. While the transaction is expected to be completed as soon as December, negotiations are ongoing and details on timeline, deal size and a final buyer could still change, they said. Shares in Unisplendour Corp., one of the Tsinghua group’s biggest listed entities, surged as much as 7.6% in Wednesday afternoon trading in Shenzhen.

Billionaire Jack Ma’s empire is mostly known for its ecommerce leadership, but the Hangzhou-based firm he co-founded has in recent years made enormous headway into computing and last month unveiled one of the country’s most advanced chips. A deal could help Alibaba score points with Beijing, which punished the e-commerce giant for monopolistic behavior but also wants to reduce its reliance on the U.S. for chips that power everything from phones to cars.

Any deal is likely to include conditions for restructuring Unigroup’s roughly 100 billion yuan-plus of onshore and offshore debt, another person familiar with the discussions said. Alibaba representatives had no immediate comment, while a Unigroup spokesperson didn’t immediately respond to requests for comment. Representatives for Zhejiang, the province that includes Alibaba’s headquarters in Hangzhou, didn’t immediately respond to an emailed inquiry. The State Council Information Office also didn’t respond to a fax requesting comment. 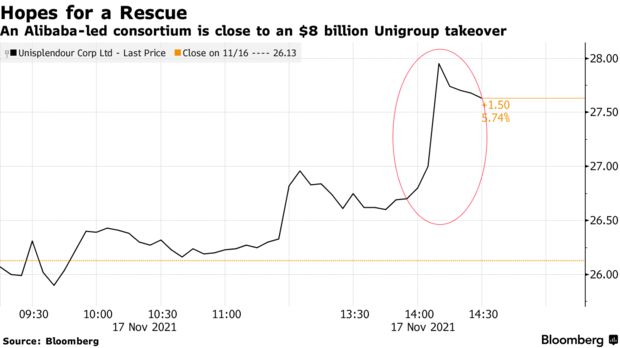 Investors are placing wagers on a better deal for Unigroup as Xi Jinping advances a self-sufficiency agenda in key technologies in a strategic race with the U.S. Three out of the four dollar bonds sold by the firm have hovered around their highest levels – albeit still distressed – since at least early November, after their best month-ever in June.

The Beijing-based company affiliated with prestigious Tsinghua University – Xi’s alma mater – remains a linchpin in a race for technological supremacy with the U.S.

Unigroup expanded rapidly during a decade-long stimulus blitz that fueled heady economic expansion through binging on credit. Unigroup and its affiliates went on an acquisition spree, buying up foreign names including RDA Microelectronics Inc. and Spreadtrum Communications Inc. en route to building China’s most sophisticated maker of 5G chips in Unisoc.

H3C, a joint-venture with Hewlett Packard, is a key server supplier to the Chinese government and state-owned enterprises. And in 2017, it unveiled its signature project: the $22 billion Yangtze Memory Technologies, which competes against Micron Technology Inc. and Samsung Electronics Co. The company at one point harbored aspirations to become the nation’s first giant in the global semiconductor industry and once planned a $23 billion bid for U.S. memory-chip giant Micron.

But concern over the scale of China’s resulting debt mountain prompted a de-leveraging campaign from around 2017, choking off the spigot for borrowing. That coincided also with a newfound impetus to restructure the sprawling corporate empires that have sprung up around the nation’s top universities, including Tsinghua.

The Chinese semiconductor titan in 2020 defaulted on a bond and in July a court ordered it to overhaul its debt, prompting it to invite strategic investors with deep pockets as well as the capability to run a major chip-making and cloud business.

Confidence that Unigroup’s distressed assets will not get left in limbo grew after a debt-workout plan in May for its peer, Peking University Founder Group Corp. Under the plan, Founder, which is linked to another of China’s elite academic institutions, will receive billions of dollars from strategic investors including a state-owned property developer.

How Xi and Biden tackled hot-button issues at virtual summit

China to prioritise economic stability ahead of CCP 20th…