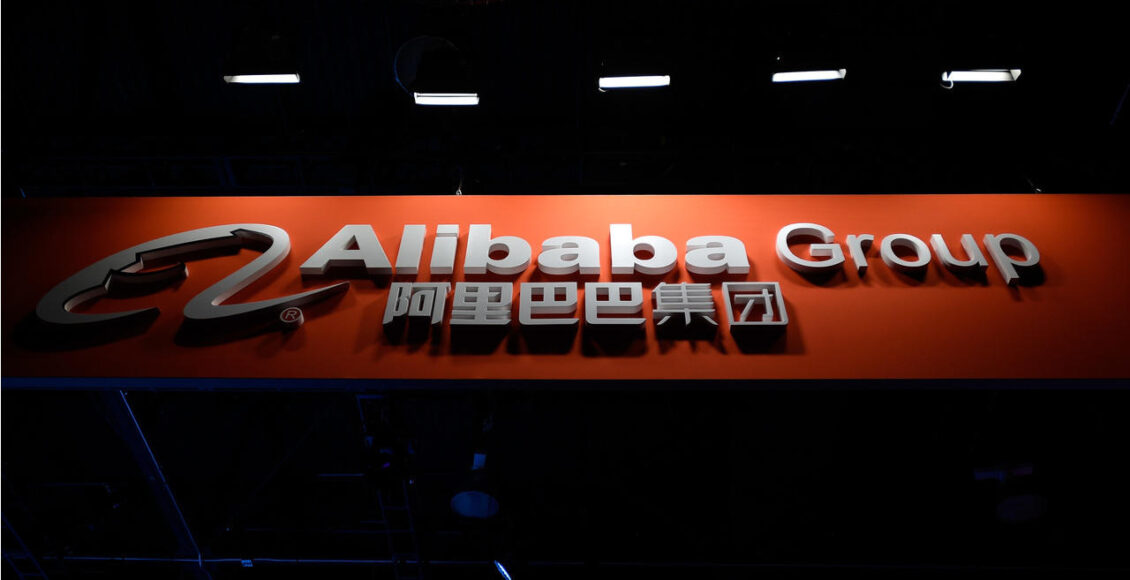 After Chinese authorities’ antitrust investigation against Alibaba ended with a $ 2.78 billion fine, the company’s shares fell by another 35%. At first glance, this is puzzling, since all subsequent actions of the Chinese government regarding increasing control over technology companies did not directly concern Alibaba’s core business.

For example. On July 23, it became known that the Chinese authorities are developing new restrictions on the education industry. And although this news does not affect the main business of Alibaba, in the next three days, the company’s shares fell in price by 13%.

Then on August 3, a state-owned Chinese newspaper called video games “spiritual opium”. And again a wave of price decline followed.

It seems that the flow of information is not being filtered and investors are selling Alibaba shares without a good rational reason. But it is possible that this is not entirely the case…

To begin with, let me remind you that Alibaba’s operating margin has been steadily declining since 2014: 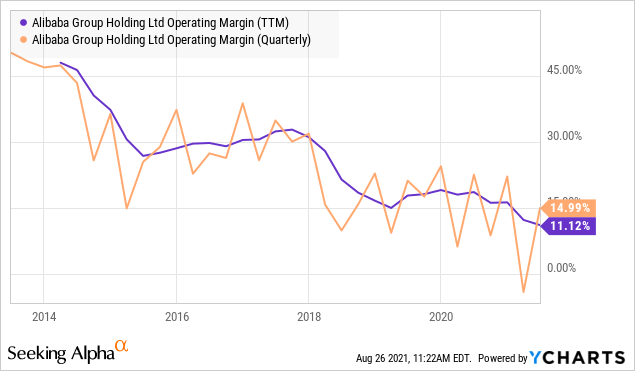 But, given that the company’s revenue growth is accelerating, the very fact of a decrease in margin does not cause concern: 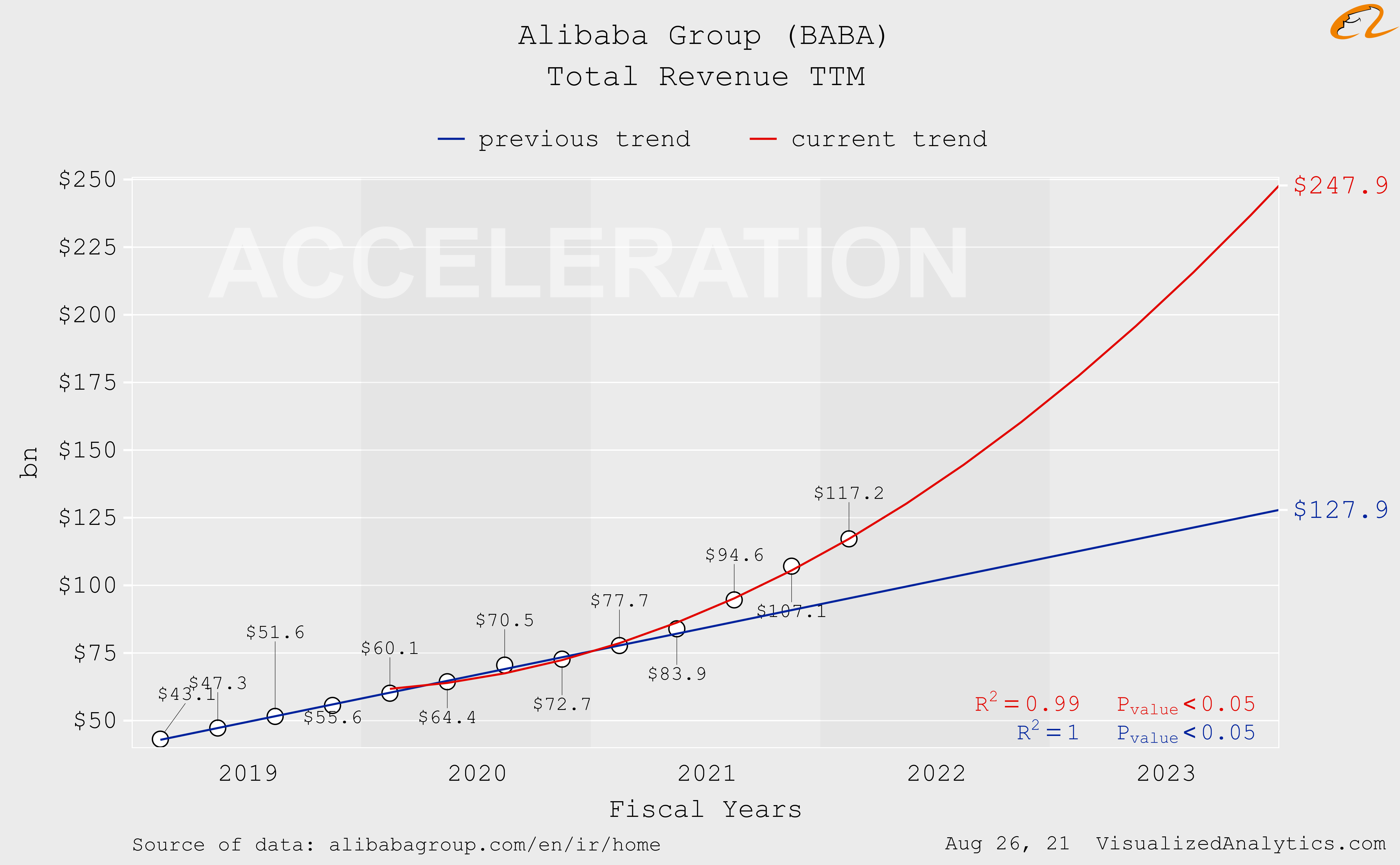 But the point is different. According to the last report, income from operations was $4.778 bn (-11% YoY) and adjusted EBITDA, a non-GAAP measurement, decreased 5% YoY to $7.532 bn. This is how management explained this result:

The year-over-year decreases were primarily due to our investments in strategic areas to capture incremental opportunities, such as Community Marketplaces, Taobao Deals, Local Consumer Services and Lazada, as well as our increased spending on growth initiatives within China retail marketplaces, such as Idle Fish and Taobao Live, and our support to merchants…

In order to expand its market share, Alibaba has been increasing strategic investments for a long time. These investments consume most of the company’s profits. But now that the Chinese government is actively changing the rules of the game, many of these investments may not be worth it. 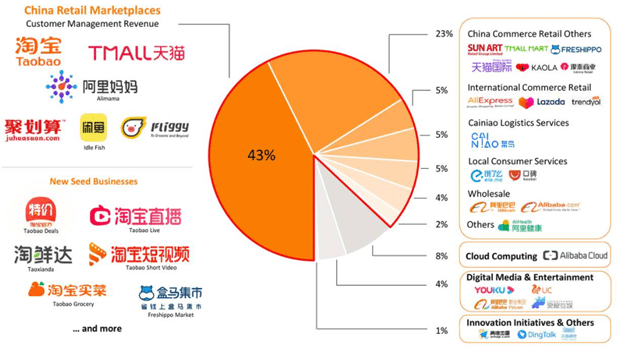 Regulatory risks are very dangerous for Alibaba, as the company does not only operate in the e-commerce space. For example, Alibaba Health. Alibaba owns more than 50% of the company worth about $20 billion. In the event of bankruptcy, this will be a tangible, although certainly not fatal, blow to Alibaba.

I agree with the often expressed opinion that the current activities of the Chinese government are driven by political goals, not economic ones. The Chinese government needs stable control over the situation in the country. And this forces them to take systematic measures. And here it is interesting to note that, judging by the 12-month forward EV/EBITDA multiple, Chinese tech companies are trading at a significant discount to US companies. In other words, at the moment, no one expects the situation to change quickly. At least, not in the next 12 months. 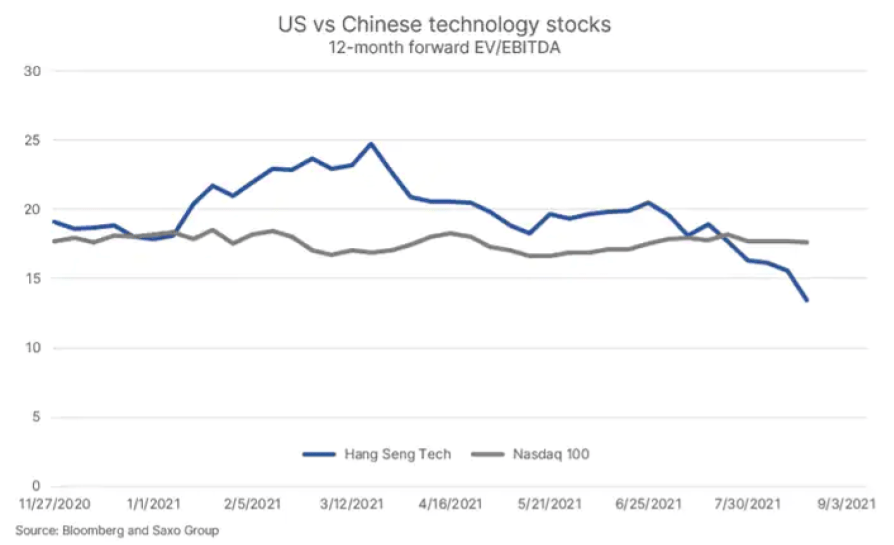 When the market is in some degree of panic, all stocks are highly correlated. This is what determines the observed decline in Alibaba shares. In addition, it is now simply impossible to predict how the new rules will affect the company’s strategic investments. Alibaba’s operating margin is likely to continue to fall.

At the same time, it should not be forgotten that potential future cash flow implies a discount of about 300% to Alibaba’s current market price. But this potential is not being realized quickly. In any case, not in the coming months.

Baidu to deploy 1,000 budget robotaxis on Chinese roads as…