Alibaba Has Bottomed Out, Technically And Fundamentally

The market is always one step ahead of the information that is in the public domain. Therefore, in fact, the news background is like a rear-view mirror for the market.

But, it is possible to make an attempt to understand what is really happening only by analyzing how the market behaves in response to the informational background. It is this analysis that I propose to make regarding Alibaba.

I will start with a detailed analysis of the multi-level technical picture. This order is important, because I want my fundamental theses to be perceived in the context of the conclusions of technical analysis.

Let’s start with the monthly chart.

Pay attention to the nature of the candlestick that was formed in March. This candlestick had a large range between high and low (~40%), but the open and close prices were almost at the same level. In the theory of technical analysis, such a figure is called “Dragonfly Doji” and as a rule it characterizes the market positively: 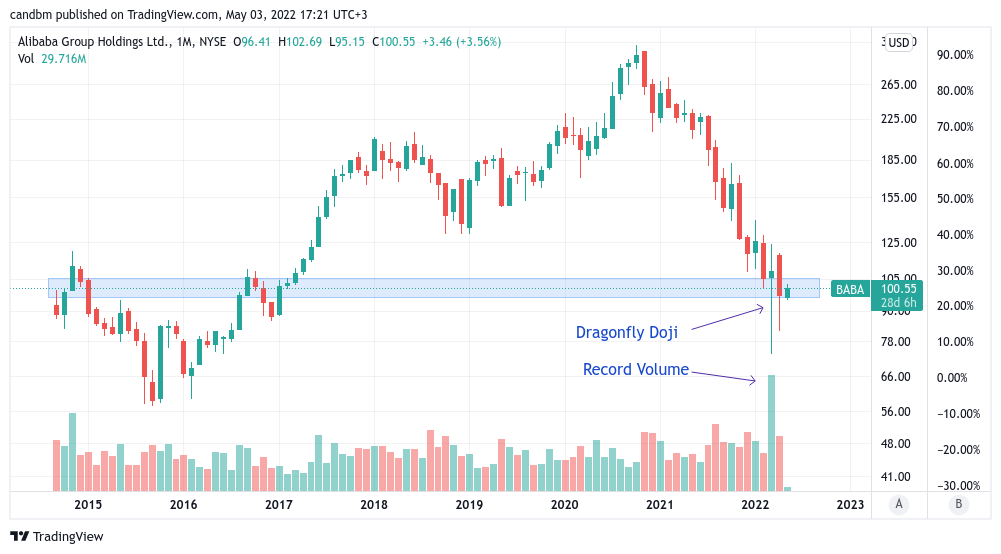 It is also worth adding that this Doji coincided with a record trading volume. The figure formed in the zone, which in 2015 and 2017 played the role of strong resistance and support.

Once again, what happened in March. A record number of investors made the decision to buy or sell the company’s shares. Trading in March opened above $100, but then the price fell below $75 and at the end of the month the price again rose above $100. This is clear evidence that the “bulls” were stronger than the “bears”. The record volume serves as an additional confirmation of this.

Let’s move on to the weekly chart and take a closer look at the corrective wave that began in October 2020.

In general, any directed wave is an alternation of local highs and lows. If the wave is bearish, then each new local bottom is lower than the previous one. 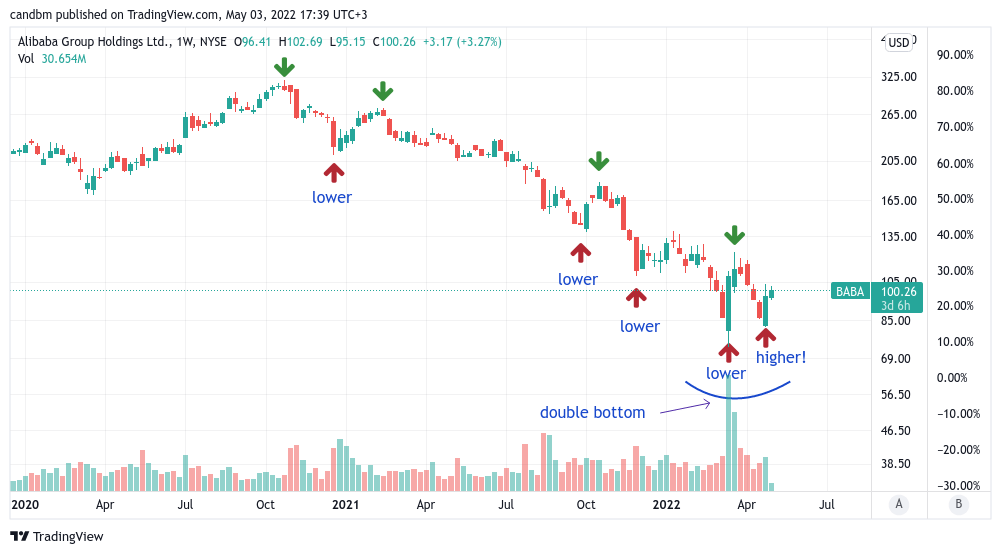 If I’m not mistaken in my conclusions, it means the formation of a “double bottom” pattern and the end of the downward, corrective wave.

Next, let’s look at the daily chart. Over the past year, three gaps can be identified here. Two of them were bearish, I mean the price subsequently dropped below the gap level. But the latest gap was bullish. The price failed to fall below the level of this gap. It also indicates a trend reversal. 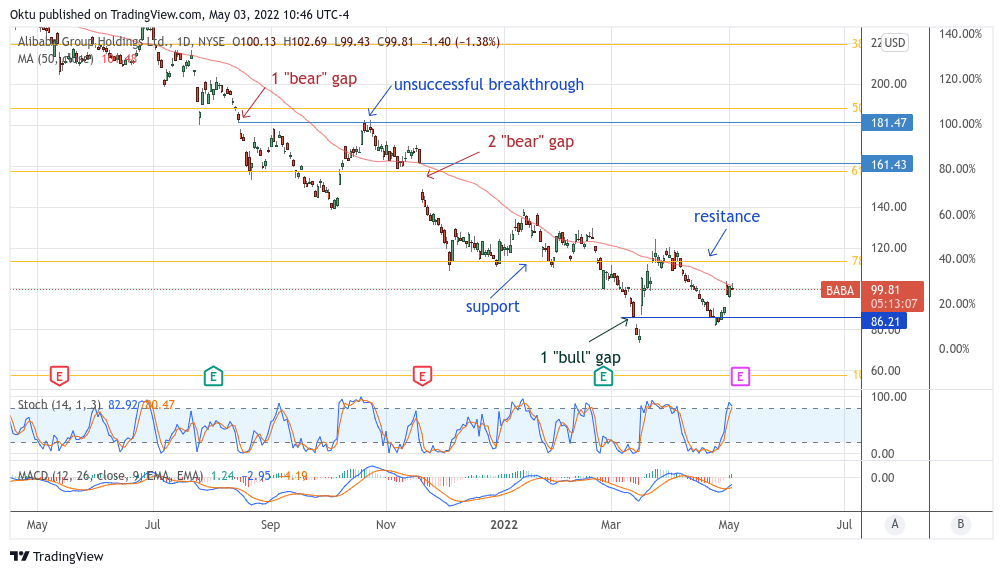 And finally, the last technical indicator, which I propose to pay attention to.

The theory of investment analysis has such a tool as the Beta coefficient. In a very simplified way, this coefficient shows how much the price of a given stock is prone to move in the same direction as the market.

And now let’s look at these coefficients in the case of Alibaba. We see that for the first time in a long time, the “Bullish” Beta has consistently outperformed the “Bearish” Beta. This is statistical evidence that Alibaba stock is now more inclined to react to positive market dynamics. 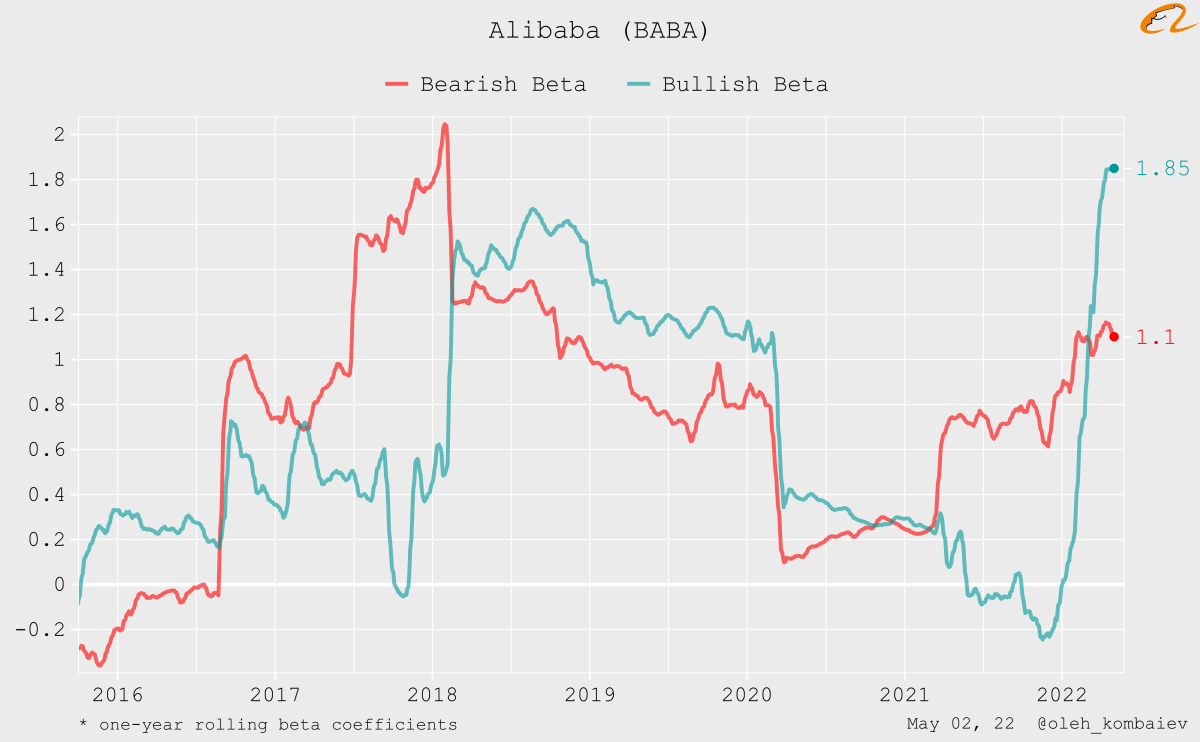 So, in my opinion, the technical picture of the market quite strongly indicates a high probability that Alibaba shares have bottomed out.

Before starting this block, I will tell a story from my experience.

About ten years ago I traded wheat (CBOT) options. Once, the USDA released a relatively positive report in which they substantially cut wheat production forecast. But to my surprise, the price of wheat fell quickly and sharply after that. Later, my broker explained to me that the price of wheat before the publication of the report already assumed such a forecast. And so then profit-taking by large investors followed, naturally at the expense of small traders like me.

In my opinion, it is very important to assess how the behavior of the market correlates with the information background that we have. At the same time, we need to understand that the news that we have read has most likely already affected the market.

What have the news been saying for the last month? The fact that as a result of strict quarantine measures, the Chinese economy is slowing down. In March, the country reported the biggest decline in consumer spending (-3.5%) and the highest unemployment rate (5.8%) since the start of the pandemic. Of course, this cannot have a positive impact on Alibaba’s business. This is reflected in the deterioration of expectations regarding the company’s revenue and EPS in the current and next year: 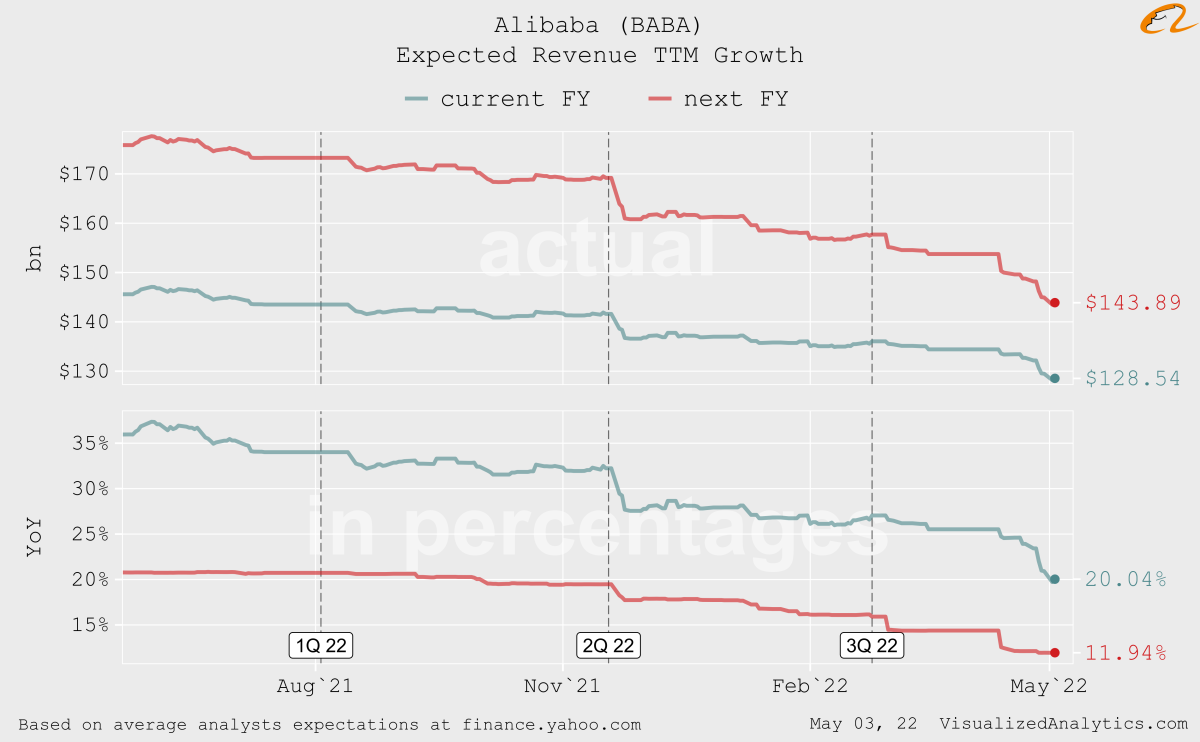 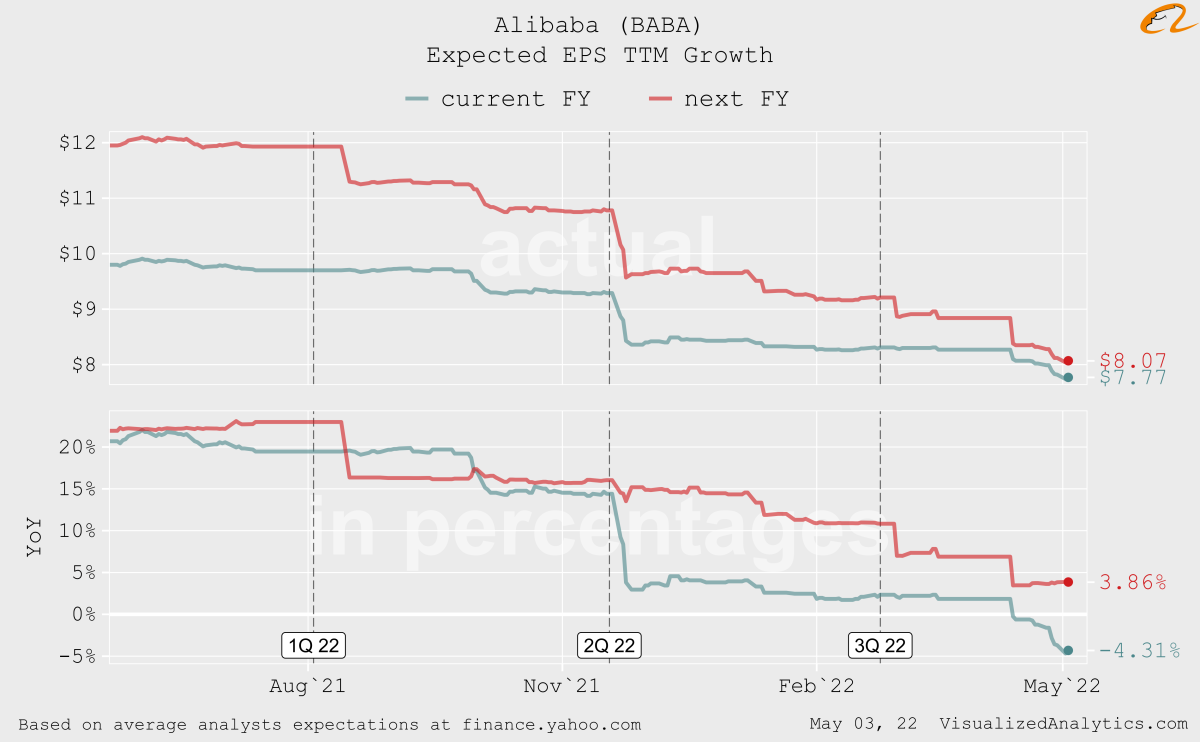 And yet, despite this clearly negative information background, as shown in the previous block, Alibaba’s price is showing clear signs of a reversal.

It seems that the shares that investors are now selling under the influence of a negative information background are quickly bought out by other investors who are aimed at a more distant future. In this situation, you need to decide which side you are on.

As oild0382 rightly pointed out in a comment to my last article, you can’t read the news that Alibaba stock has bottomed out. At the moment when it becomes clear to everyone that the stock has reached the bottom and everyone will write about it, the share price will already be 30% higher than the level of this bottom.

I do not know the future and I can definitely be wrong. But putting together the technical and fundamental pictures, I believe that with a very high probability it can be argued that the bottom for Alibaba has indeed been reached.

Chinese economy to recover by end of May, said analysts

Alibaba: Fear Of Missing Out? Do Not Miss The Boat Again

Kuaishou revenue rises 33 per cent in third quarter amid…