Alibaba Drops as Inclusion in US Delisting List Fuels Jitters

Alibaba Group Holding Ltd. fell on Monday amid escalating concerns that the stock could be booted off American stock exchanges for failing to comply with US disclosure rules.

The e-commerce giant’s shares declined as much as 5.7% in Hong Kong to lead a drop in the Hang Seng Tech Index, which was down 1.8%. The US securities watchdog on Friday added the stock to a growing roster of companies facing removal because of Beijing’s refusal to permit American officials to review their auditors’ work.

Alibaba’s stock had rallied briefly early last week amid optimism that the company’s plan to seek a primary listing in Hong Kong would enable it to tap more mainland investors. The gains have since vanished as traders brace for the firm’s earnings report due this week, with analysts predicting that the firm will announce its first-ever negative quarterly revenue growth.

“Alibaba’s recent application to the HKEX for dual-primary listing status and the lack of positive news on the US-China negotiations on the audit issues have likely led the market to believe more strongly that Chinese ADRs will inevitably be delisted,” Jefferies analysts including Edison Lee wrote in a note on Sunday. 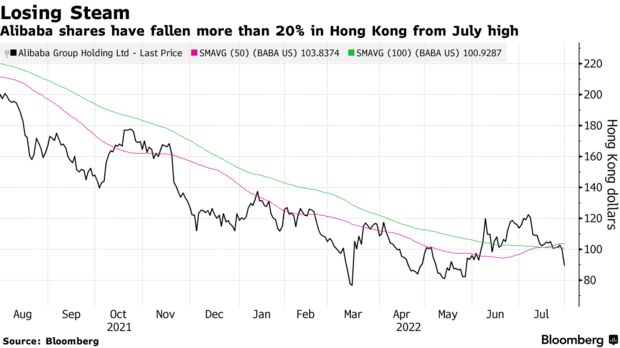 Alibaba said it will seek to maintain its listing status on both the NYSE and HKEX and will comply with applicable laws and regulations, according to a statement to the Hong Kong stock exchange.

The stock has dropped 27% from a July high, after climbing 70% from a record low reached in March. Its recovery lost momentum as it was reported that company executives were questioned by authorities in connection with a case on data theft, and the firm was fined for not properly reporting past deals.

China’s Economic Slump Shows No Signs of Bottoming Out in…