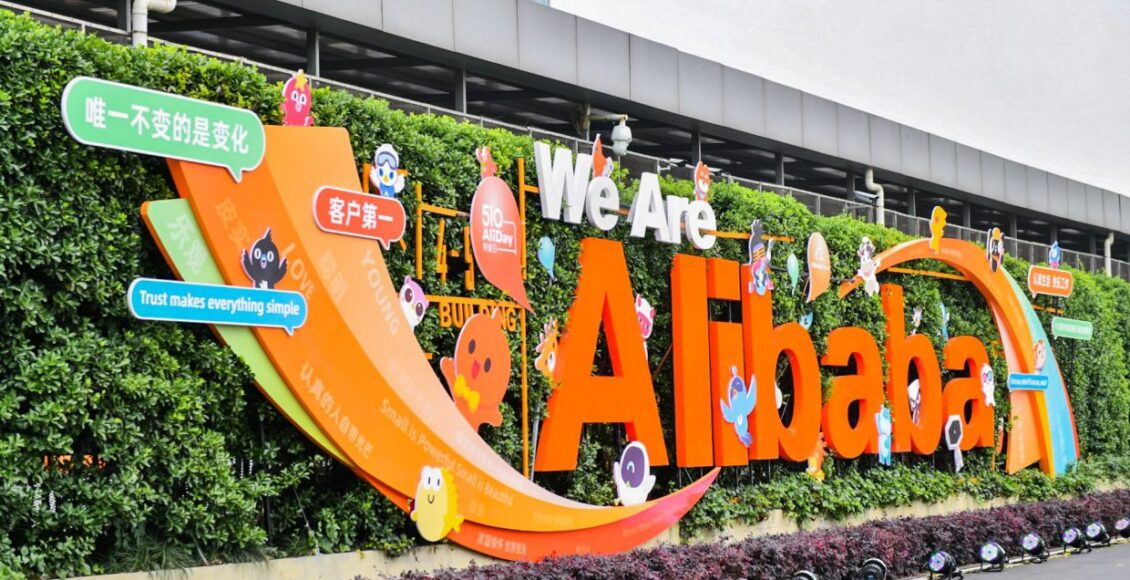 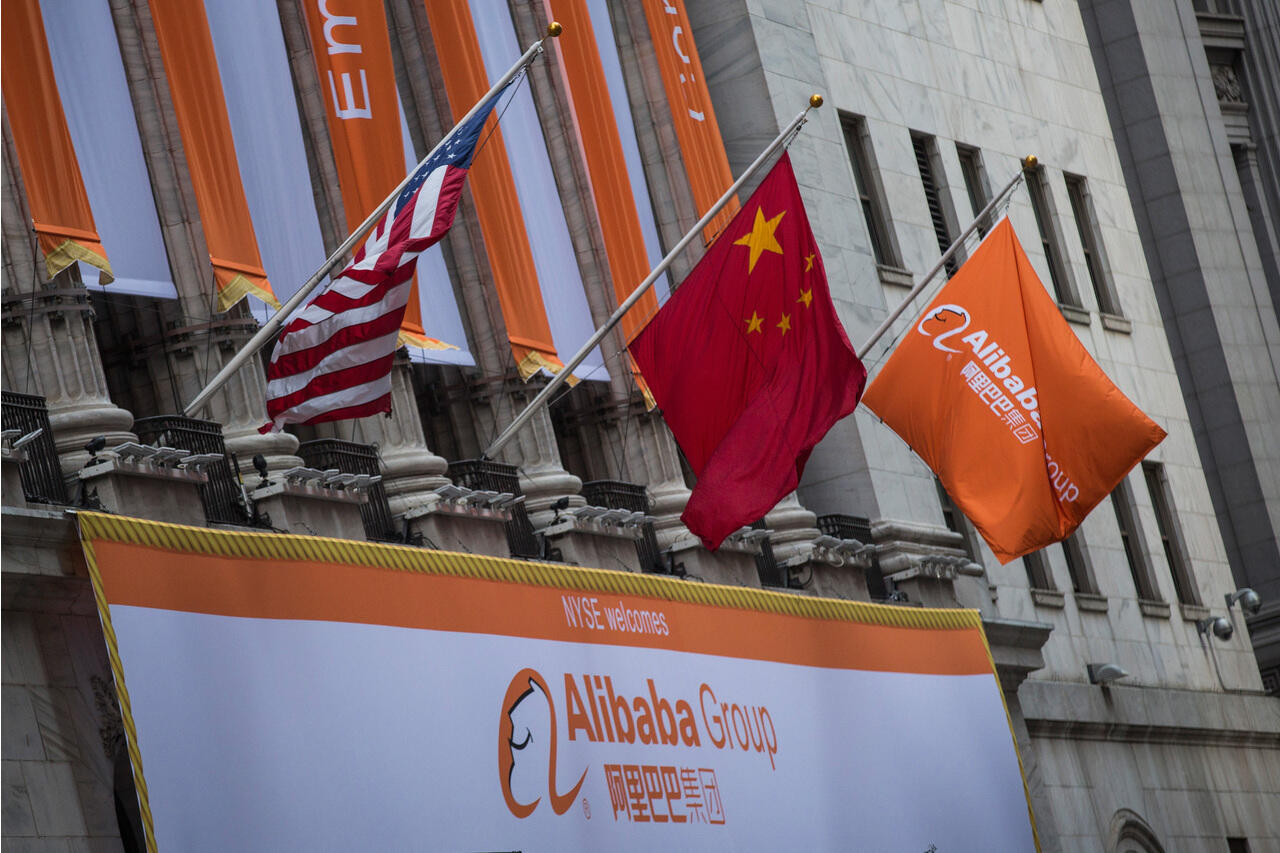 With deep ideological divides that are unlikely to abate, it appears that U.S.-China relations are moving into a permanent state of tension. Nevertheless, Alibaba will continue to grow, since its business is predominantly based in China and to a lesser extent surrounding regions – it will be aided by the rising tide of China’s middle class and high growth in business lines like cloud.

No one seems to dispute that Alibaba is a tech juggernaut at an inexpensive valuation relative to its own history and to U.S. tech mega-caps. But lately, the market has not been fully persuaded by the numerous bullish SA articles about Alibaba. Most articles focus on the growth story and valuation, with a tiny section on risks – here, I’ve done the reverse, with a focus on the main areas of concern like regulatory and competitive risks. Delving into these worries and putting them into context, they are easier to set aside in favour of the bigger picture of long-term growth.

Overall, the potential medium/long-term upside outweighs the downside. But I think it makes sense to restrain one’s exposure given the risks. China is a polarizing topic among investors – the geopolitical and country-risk aspects of investing in China are, to say the least, complicated. I’m not yet convinced that Alibaba is a buy-and-hold-forever stock.

Alibaba is a growth stock at an inexpensive valuation – unlike some growth stocks, Alibaba comes with an impressive array of “value stock” kinds of problems: anti-monopolistic and other regulatory risks; geopolitical tensions that could hamper investability; a repressive communist regime that can arbitrarily crush any outspoken critics; fierce domestic competition. In other words, par for the course for value-oriented investing.

More specifically, the current fears that exist, as far as I’ve been able to gather, could be categorized as follows: (1) warranted, (2) less warranted, (3) resolved, and (4) other concerns that are more difficult to categorize.

3. Concerns that have been resolved

There could be moral concerns with investing in Chinese equities, given China’s dismal human rights track record, and potential surveillance applications of Alibaba’s AI technology. But Alibaba has (at least officially) distanced itself from this and is not thought to be associated with the Communist Chinese military – it wouldn’t make sense to paint an entire country and everything in it with the same brush. If the CCP were found to have enmeshed itself into Alibaba, this perception could change.

Lastly, the U.S. Public Company Accounting Oversight Board wanting to inspect Alibaba’s audits is more than just a ceremonial listing requirement. Following scandals with Luckin Coffee and others, any accounting snafu with a company of Alibaba’s prominence would be a major embarrassment for all involved. Note that Alibaba has been audited by the Hong Kong office of PricewaterhouseCoopers, from the start. Of course, accounting risks exist with any company.

Overall, fears around Alibaba should be put into context. A delisting/ban could take a few years to play out. There is also fierce domestic competition, but this should be expected. The bigger picture is that China is still a fast-growing economy with a rising middle class. China also wants to solidify its position on the world stage, and to make progress on its own domestic challenges – it needs a competitive private sector to accomplish this.

A Delisting/OTC Trading Ban Is A Real Possibility

Normally with a delisting, a stock would continue to trade OTC. If this were the case for Alibaba, a “delisting” would more or less be a non-issue – indeed, Alibaba already trades OTC. But the Holding Foreign Companies Accountable Act also bans OTC trading of Chinese companies whose audits hadn’t been inspected after three years.

Another option could be direct ownership on the HKSE, if one’s brokerage allows that. It’s not hard to imagine that obvious circumvention like this could become restricted somehow, in the future (from either side – recall China’s foreign ownership restrictions) – but I don’t know the feasibility of that. Institutional investors could presumably find a way to work around restrictions – for retail investors, there might, at the very least, be the inconvenience of changing brokerages.

The newly proposed “Accelerating Holding Foreign Companies Accountable Act” would further reduce the grace period of non-compliance from three years to two years. 2-3 years still gives time to work out a resolution, but both sides are taking a hard line – the differences could be irreconcilable.

Alibaba is confident it can comply with the rules – the question is maybe more whether the CCP will allow that – national security law prohibits Chinese companies “from turning over audit papers to U.S. regulators”. On the U.S. side, the SEC has tried for “more than a decade to get Chinese cooperation with the PCAOB”. The HFCAA also asks for the CCP status of board members – any perception of CCP influence could be another problem for Alibaba.

To get a handle on the potential stock price impact of a delisting/ban, one can look at the recent impact on China Mobile, China Telecom, and China Unicom. They were delisted/banned more immediately, because of concerns that they could be associated with the Communist Chinese military, which isn’t the concern with Alibaba. See Dilantha De Silva’s “Everything You Need To Know About the Delisting Of China Mobile”, for more info.

From the charts, one can make a few observations:

Nothing is imminent, and many doubt that Alibaba would be delisted – on the flip side, this likely means that such an outcome is not fully priced in yet, either. But even then, if one considers Alibaba to have the same kind of long-run growth potential as U.S. tech mega-caps, a one-time ~20% price impact is small peanuts.

Alibaba decided to also list in Hong Kong specifically to “tap a wider investor base and capital pool across Asia” – as a result, its price is determined globally, not just in U.S. markets, and this should help to put a floor under the price. If Alibaba’s stock was to stay in the doldrums for 2-3+ years, at currently-subdued levels, despite underlying business growth, that would be surprising. Previous stretches off the high have not lasted much longer than that. 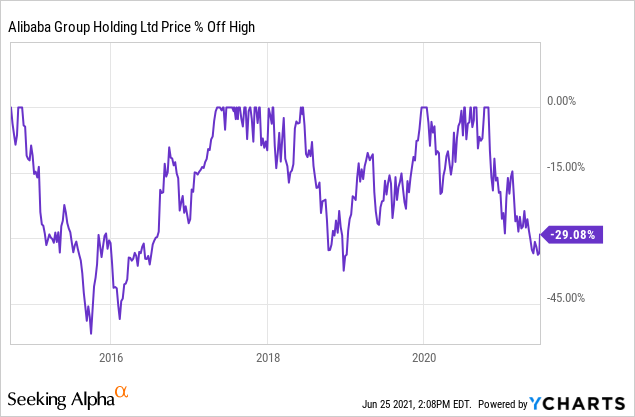 (Note that Trump ordered a ban on investment in smartphone-maker Xiaomi, but this was later reversed by a court)

China Wants Greater Economic Prosperity and Geopolitical Influence, So It Will Not Undermine Its Tech Leaders

Another concern is that the communist regime can arbitrarily crush outspoken critics, and perhaps undermine the private enterprises of high-flying entrepreneurs. This concern surfaced in the wake of the where-is-Jack-Ma episode, and his criticism of Chinese banks may have been part of the motivation to suspend the Ant Group IPO. But unfortunately, a party with absolute power doesn’t need to beat around the bush – the CCP can also just persecute any individual that doesn’t stay in line, while leaving the business intact. The example of the 18-year prison term for Ren Zhiqiang, ex-chairman of a state-owned real estate company, comes to mind.

China faces slowing economic growth (6.1% in 2019) combined with a slate of domestic challenges, including an aging population, massive income disparity, the need for broader/better insurance coverage, health care, environmental protection, etc. In other words, many of the same problems as other countries. Robust economic growth looks like the best way for the CCP to comfortably retain its grip on power, by keeping the population placated.

The recent round of regulatory sanctions could instead be taken at face value: curbing anti-competitive practices should ultimately bolster China’s economic engine in the long-term, not slow it down. For Alibaba, specifically, the recent antitrust fines were well below the maximum penalty and hardly forbode doom. Regulation of the financial sector, e.g. Ant Group, is also standard practice in any advanced or aspiring economy.

There’s no getting around the fact that China is an authoritarian state, which is a long-term country/geopolitical risk. The CCP has been keen to assert China’s interests on the global stage, sees the West as being in decline, heavily subsidizes efforts to transform China into a high-tech powerhouse, and envisions a new era of multipolarity. Examples of irreconcilable differences between China and the West include China’s stance towards Taiwan, Hong Kong, human rights (or lack thereof), and other geopolitical frictions.

Rather than deliberately undermine Alibaba or other tech leaders that help drive innovation and growth, a likelier risk could be that the CCP encroaches itself into the governance of the business. One commentator, for example, noted that “Chinese authorities were strengthening their relationships with the country’s leading internet companies as a way of realizing policy initiatives”. Certain “well-connected Chinese power players” may have opaque ownership interests in Alibaba, as well. This circles back to the geopolitical/delisting risk, earlier.

Domestic Competition is Fierce, But What Did Anyone Expect

China is the world’s 2nd-largest economy, and is expected to surpass the United States as early as 2028. The IMF forecasts China’s 2021 real GDP growth to be 8.4%, after the pandemic slowed it down to 2.3% in 2020. China’s e-commerce market is expected to hit $3T by 2024. It would be highly unusual if Alibaba didn’t face tough domestic competition.

A near-term implication of this competition is that Alibaba will be re-investing all incremental profits in the coming year into the business. Amazon investors have rejoiced at seemingly endless years of reinvestment at the expense of near-term profitability – Amazon faces serious competition in all of its lines of business like retail and cloud, yet continues to show strong growth. Given that expected revenue growth for Alibaba is in the double-digits over the next few years, re-investment makes sense.

It’s hard to say exactly how the competitive landscape will shake out, but for growth investing, a relevant adage that comes to mind is that “winners keep winning”. Alibaba has been a market leader for a while and it’s not likely to get left in the dust. If the concern is fierce competition from rivals, one solution is to buy them or an ETF, as well. 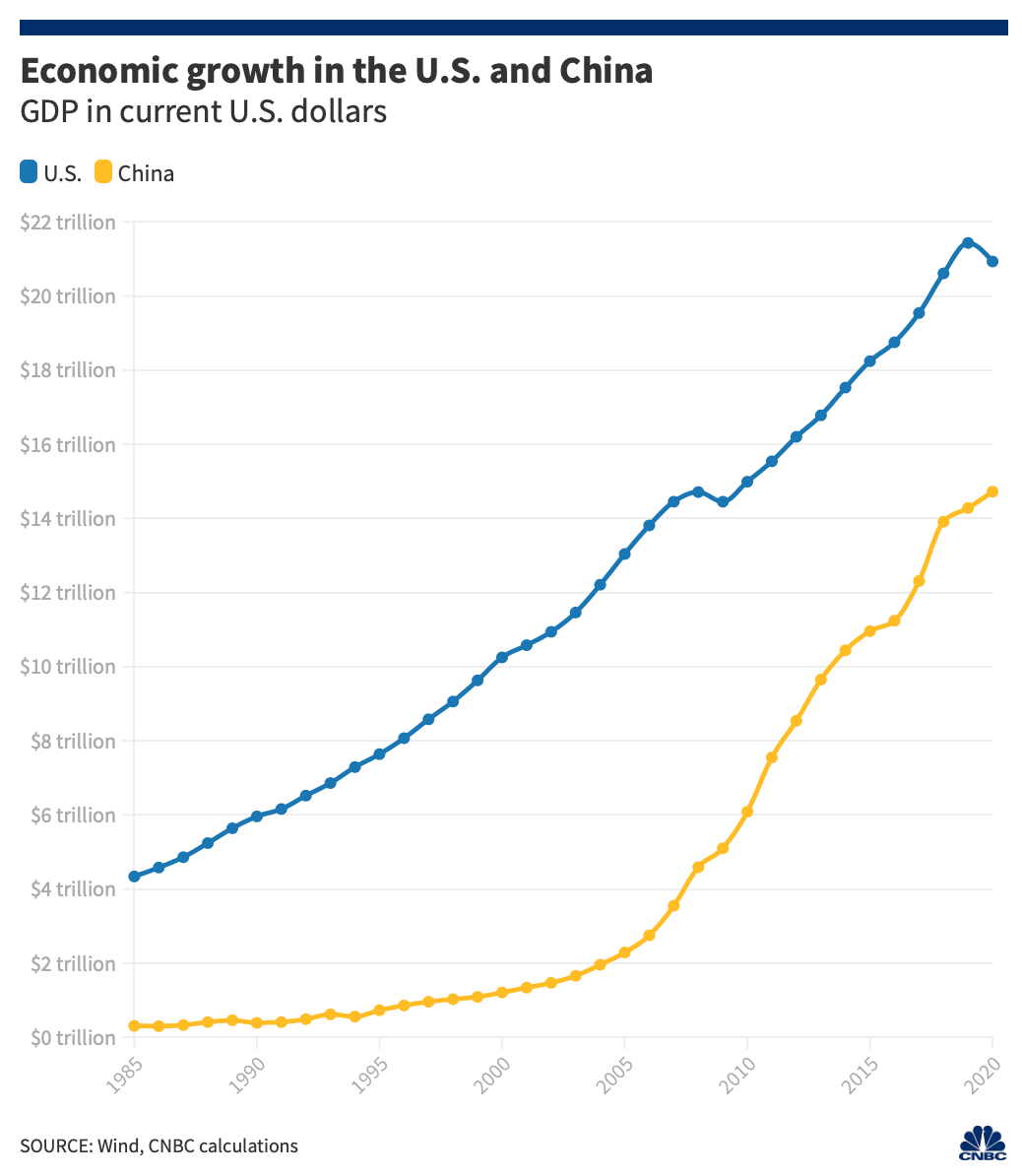 A wide range of SA articles already deal with this topic pretty well. I would add that with no obvious path that would end doubts about delisting, accounting, and U.S.-China tensions, Alibaba probably won’t trade in-line with the multiples of its U.S. peers anytime soon.

Factors that should contribute towards positive momentum:

Here are a couple of obligatory charts showing that Alibaba is closer to the lower end of its long-term valuation multiples: 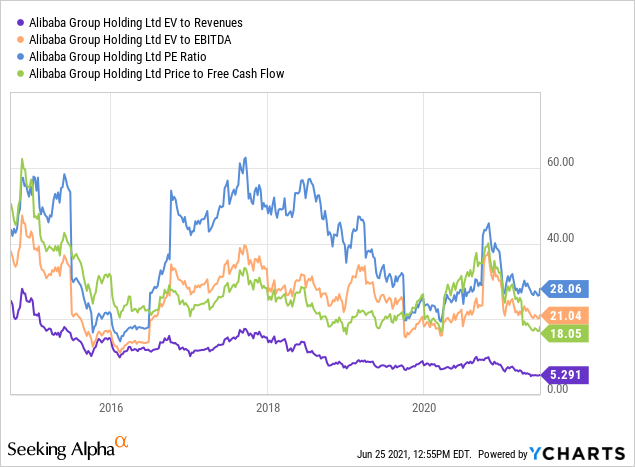 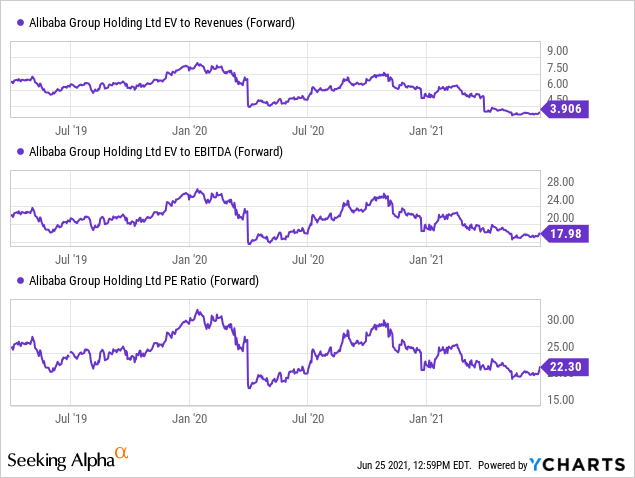 Back in October 2020, Alibaba was reaching all-time highs. Certain fears that added to its stock price correction have been resolved (antitrust investigation, Jack Ma’s supposed disappearance). But rather than seeing a sustained rebound in stock price, new fears have arisen: e.g. a U.S. delisting/trading ban, reduced profitability from continued regulatory pressures, and domestic competition.

When put into the right context, it’s clearer that these concerns are outweighed by Alibaba’s prospects for long-term growth: a potential delisting is years away and doesn’t affect underlying fundamental value; regulatory pressures are normal in many sectors, e.g., the financial industry; and fierce competition should be expected, for the world’s 2nd-largest economy. Having said this, it makes sense to limit one’s exposure to any company/sector/country, and Alibaba/China is no exception.

Many others probably know a lot more about Alibaba and China than I do. You know where to find the comments section!