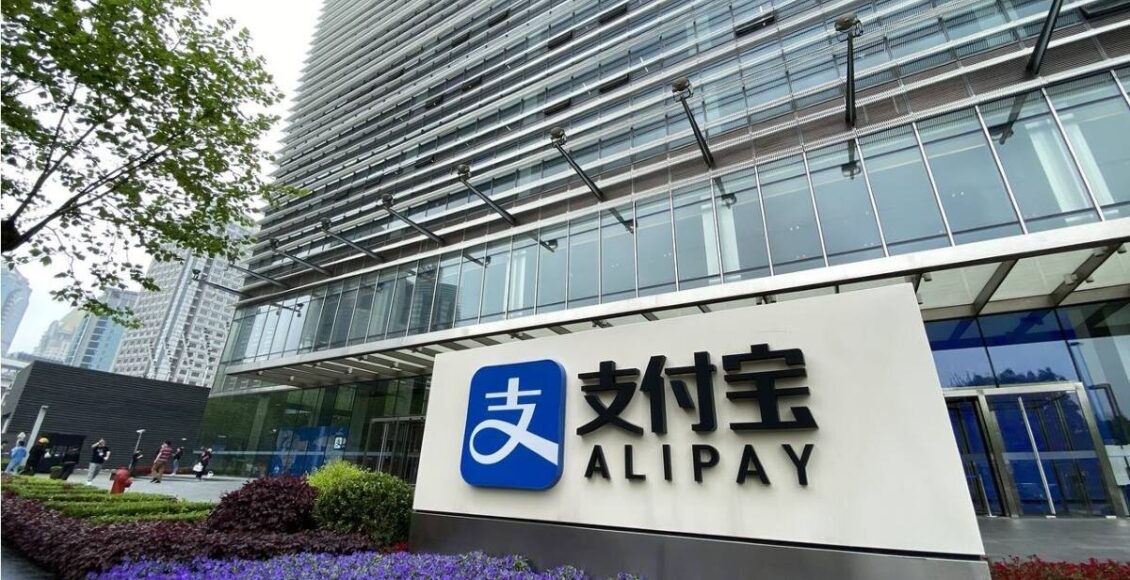 Alibaba (BABA) has performed very badly over the last year, with the reason for that being that investors worry about regulation and how the Chinese state may hurt the company in the future. On the operating side, things are looking good for BABA, as it continues to deliver sizeable business growth in its core business as well as in other areas, such as cloud computing.

Alibaba’s Ant Group, which originally planned to IPO around a year ago, has seen regulators impose some new demands recently, including a so-called “breakup”. From what we know today, I think this move will not hurt the company too much, and may in fact be a positive for Alibaba in the long run, as it might allow for an IPO in the foreseeable future. On top of that, the market could come to the conclusion that regulators have now dealt with Ant Group and will move on, which could result in improving sentiment, which would positively impact BABA’s outlook.

When one takes a look at BABA’s share price performance over the last year, one might imagine that the company was running into massive troubles, or that its business was shrinking at a rapid pace. 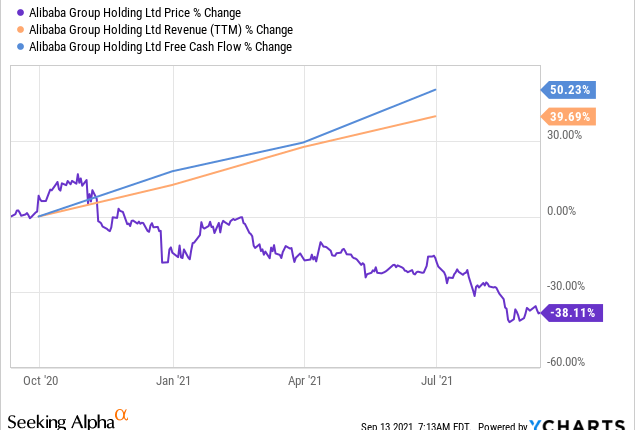 Data by YCharts
The contrary is true, however, as we can see in the above chart – while shares are down close to 40% over the last twelve months, revenues are up 40% in the same time frame, and free cash flows rose by an even better 50% throughout the last year.

Clearly, BABA is doing just fine operationally, as its core business keeps growing thanks to new users while the cash flows that the core commerce business generates are pushed into new growth areas such as cloud computing. With that strategy, BABA has successfully grown its top and bottom line for years, and from what we know today, this could easily continue in the coming quarters and years.

And yet, BABA’s shares are down quite a lot over the last year, mainly due to macro fears related to China. Investors, primarily in Western countries, fear that politicians and regulators will hurt BABA in the future. So far, there hasn’t been too much bad influence from the side of regulators, apart from the stopped IPO of Ant Group and a fine of $2.75 billion early this year. A sub-$3 billion fine, for reference, is significantly smaller than some of the fines US-based tech companies have experienced in Western countries, and the amount of the fine equates to just a couple of weeks’ worth of profits for Alibaba – thus this is, by far, not a company-breaking issue.

And yet, some investors are selling BABA’s shares like the company was in danger of going out of business. In fact, similar selling pressure exists for other large Chinese companies, including Tencent, Baidu, and JD.com: 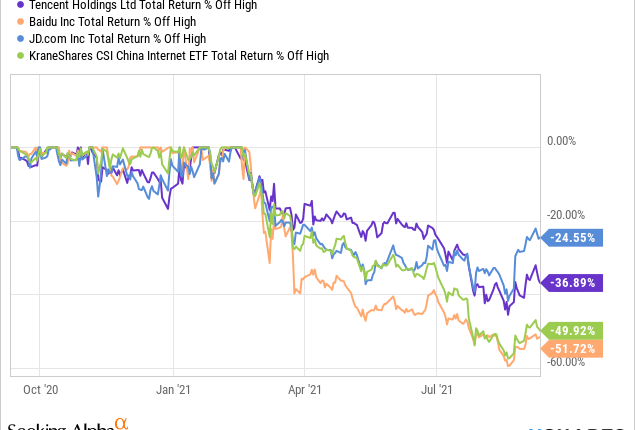 Data by YCharts
These companies, as well as the China Internet ETF (KWEB), trade 25%-50% below their 52-week highs right now, which shows that BABA’s -38% return over the last year isn’t really an outlier – instead, the company performed more or less equally bad as other major Chinese tech companies.

This weak share price performance has, at least to some degree, been further amplified by the fact that “Short China” has become one of the most crowded trades on Wall Street. Combined with the fact that institutional investors have been decreasing their exposure to Chinese equities, this led to additional selling pressure on BABA and other major Chinese companies, thereby increasing short-term share price losses. There are, however, some early signs that institutional investors may have started to come back following a lot of selling during the summer months, and notably, Alibaba and Tencent are up since ARK (ARKK) started to buy Chinese equities again.

Ant Group Breakup And Why It Might Be Bullish

We very recently got the news that Chinese regulators are looking into breaking up Ant Group. It does look, however, like this breakup will not hurt the company too much when we take a closer look. The Financial Times reports that regulators are looking towards forcing Ant Group to divide its business into several apps, which primarily means that a new app will have to be created for Alipay’s loan business. The data used for loan approvals would also have to be shared with a joint venture in which the Chinese state owns a stake. Such a move would, I assume, lead to even more information about Chinese citizens being available for the state, which may or may not lead to even more controlling and monitoring by the state and its agencies. It does, however, look like this will not necessarily hurt Alipay directly – after all, the Chinese state isn’t a competitor when it comes to providing consumer loans to online shoppers. The state’s interest in getting this data is not business-related, and thus Alipay doesn’t really have to worry about this move hurting its profitability, I believe.

The other measure being sought by regulators, i.e. the creation of a new loan-focused app, does also not seem like a major issue for the company. Consumers will have one additional app on their phones, but I doubt this will make a significant proportion of the app’s user base shy away from using it.

I thus do believe that both of these measures will not hurt Alipay’s business prospects in a major way. Instead, the moves seem to be driven by the party’s interest in knowing even more about their citizens, and on top of that, these moves suggest to me that regulators want to show that they are “doing something” while at the same time regulators don’t want to hurt innovative, high-growth companies too much, as the country needs these to achieve its long-term growth goals.

These moves related to Ant Group could be the start to a new IPO process, I believe – regulators and politicians impose a couple of new demands and show the public that the state is in control while securing access to additional data about the populace before Ant Group is finally allowed to have its IPO. Several analysts and investors are predicting that an Ant Group IPO could happen over the next year, including venture capitalist Mitchell Green and one of Ant Group’s directors, Fred Hu. About two weeks ago, reports about cooperation between Ant Group and state-backed firms already emerged, pointing towards this being a step towards an IPO in the foreseeable future.

It should be noted that an eventual IPO of Ant Group is far from guaranteed, of course, and things could still take a different course. But I personally believe that there is a relatively high likelihood that Chinese state actors will not try to harm the company too much, as this would not help in driving economic growth, investments, or technological progress. Instead, state actors will remain interested in securing access to data, but I believe that an eventual IPO of Ant Group could easily happen a couple of quarters down the road. This could showcase that the longer-term outlook for Alibaba is far from bad, and it might help in easing fears about regulation for both Alibaba and the broader Chinese tech industry. I thus do see the recent regulatory moves regarding Ant Group as a potential positive – neither the data-sharing agreement nor the introduction of a second, loan-centered app should hurt Alipay’s business prospects too much, and if these measures help in securing an IPO down the road, these measures could, in fact, turn out to be positives when it comes to Alibaba’s stock outlook.

Alibaba is, like many of its Chinese tech peers, trading well below last year’s highs. The reason for that is not based on fundamentals or operational challenges, but instead, fears about politics, macro risks, and regulations have caused this weak share price performance of BABA, TCEHY, and others.

Alibaba continues to grow its business at a rapid pace, the company has recently ramped up shareholder returns via buybacks, which I see as a major positive at current valuation ranges, and shares remain extraordinarily inexpensive. Alibaba trades for just 17x this year’s expected net profits right now, which represents a large discount relative to US-based tech companies and relative to how BABA was valued in the past.

There are risks that have to be considered, and developments around regulatory moves should be closely watched, but I believe that BABA is worthy of investment at current valuations. Shares are priced so inexpensively that the risks seem to be fully accounted for, and if sentiment improves – e.g. due to a successful IPO of Ant Group – shares could have a lot of upside potential.

All in all, I thus continue to deem BABA a solid investment pick and remain bullish on the stock’s long-term potential, although this is, of course, not a stock one should have an overly high allocation to due to the China-specific risks that should not be ignored.