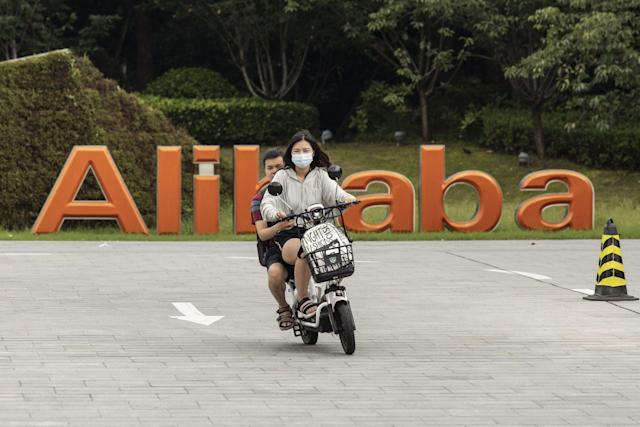 Alibaba is one of the cheapest mega-cap tech stocks in the world (by Price-to-FCF) after regulatory fears in China have wiped off ~$400B of shareholder wealth over the last ten months in this counter. As a long-term investor, I embrace FUD (Fear-Uncertainty-Doubt) around high-quality companies because such situations often lead to significant market outperformance (or alpha). 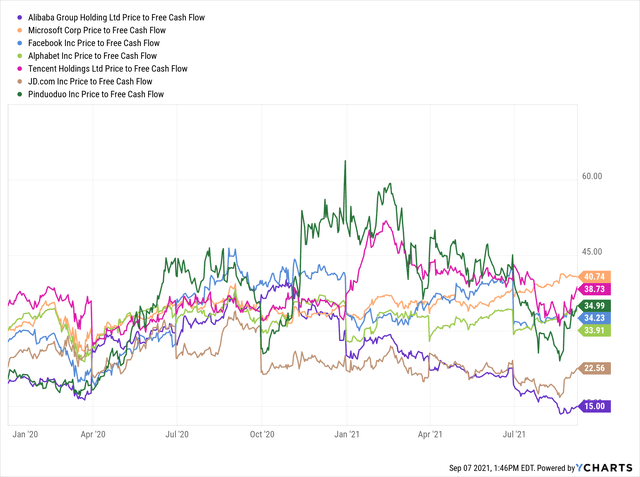 Today, many Chinese mega-cap tech stocks (including Alibaba) appear to be trading well below intrinsic fair values based on their underlying business fundamentals and current financial outlook. According to my DCF analysis, Alibaba is worth ~$500 per share (more on that later). Although Chinese stocks tend to have a permanent discount compared to their western peers, the current situation is absolutely shocking. Alibaba is trading at a Price-to-FCF multiple of just 15x, which is less than one-third of the average multiple commanded by “FAANMG” stocks.

Digitization is a long-running global trend, and revolutionary technology companies such as Amazon, Apple, Microsoft, Google and Facebook are dominating the globe. Now, Alibaba operates at the scale of these aforementioned companies as it reaches nearly ~1.2 billion consumers with wide-ranging service offerings such as e-commerce, logistics, cloud computing, digital finance (through ownership in Ant), and many others. However, Alibaba is, unfortunately, a Chinese conglomerate with nearly all of its business coming from a country that is now deemed “unfriendly” to business by the entire global investment community (institutional investors, financial media, retail investors, analysts, traders, and all other stakeholders). I think it is fair to say that investing in China (the second-largest economy in the world) seems scary right now, but could this pessimism and fear be the point of maximum financial opportunity? 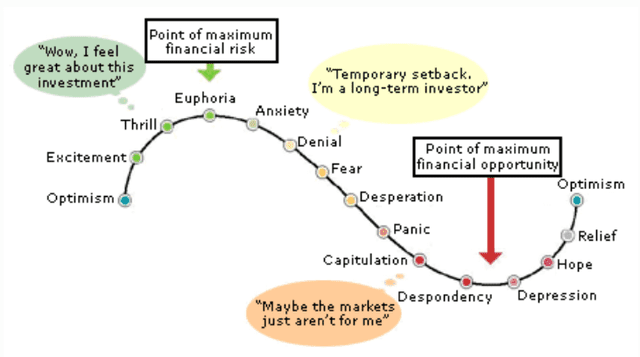 In today’s note, I will analyze Alibaba’s financial statements to decipher the strength of its underlying business fundamentals. Furthermore, I will share my fair value estimate and projected return for the company. Lastly, we will discuss some of the regulatory risks that may or may not damage Alibaba’s business in the future.

Over the last five years, Alibaba has delivered explosive revenue growth, with revenues going from ~$20B to ~$116B (nearly 6x). During this period, Alibaba’s margin profile has deteriorated as the company has been aggressively diversifying its e-commerce business and venturing into other areas like cloud computing, digital media & entertainment, whilst also undertaking innovative initiatives or moonshot bets (similar to Alphabet). 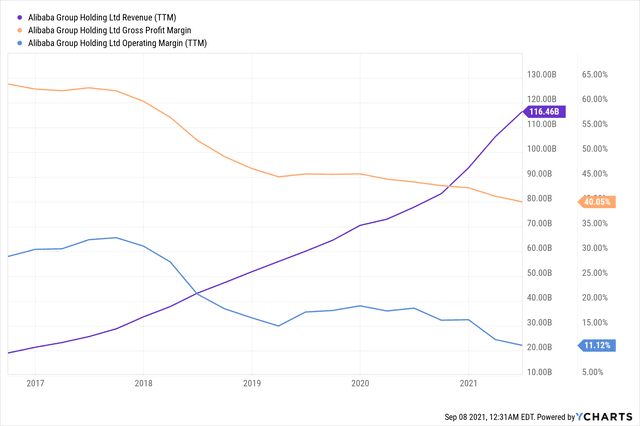 On digging a little deeper into Alibaba’s numbers, we can see that the overwhelming majority of its revenue comes from its core e-commerce businesses. As of the quarter ended June 30, 2021, Alibaba’s commerce revenues made up nearly 87% of its business. Since the Chinese government has not really attacked this part of Alibaba’s business (other than a hefty $2.8B fine, which I think is just the cost of doing business for a company of this magnitude), Alibaba’s fundamentals remain strong for now. 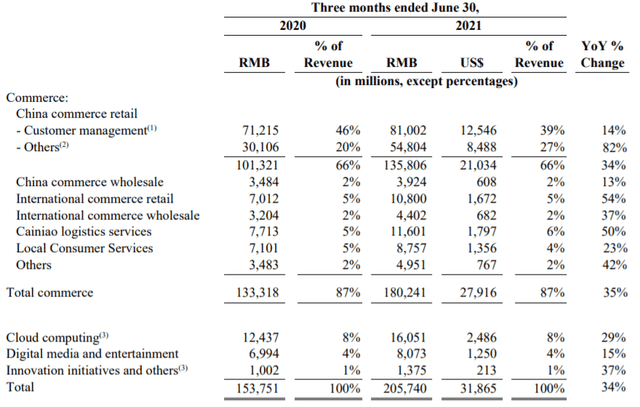 Since its IPO in 2014, Alibaba has emerged as a free cash flow generating machine. In the last twelve-month period alone, Alibaba has generated ~$32.35B in free cash flow. Although Alibaba’s gross margins have been sliding down, its massive revenue growth has allowed Alibaba’s FCF to skyrocket in recent years. Now, government intervention may throw a spanner in the works for this spectacular cash printing machine (Alibaba); however, the regulatory measures introduced over the last ten months have not impacted Alibaba’s FCF generation yet. 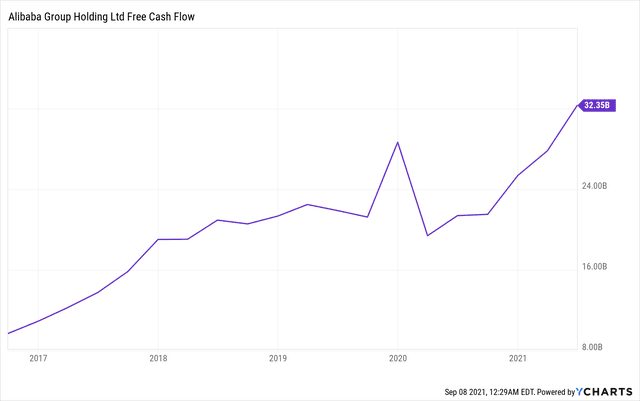 On the back of robust free cash flow generation, Alibaba has built a rock-solid balance sheet with a net cash position of more than $50B [Cash and Short Term Investments of $75B, Financial Debt of $23B]. Alibaba recently raised the size of its stock-buyback program to $15B, and this capital return program may continue to grow over coming years. In my opinion, Alibaba’s buyback program has the ability to create massive shareholder returns over the long run, even if the company fails to grow much from its current state. 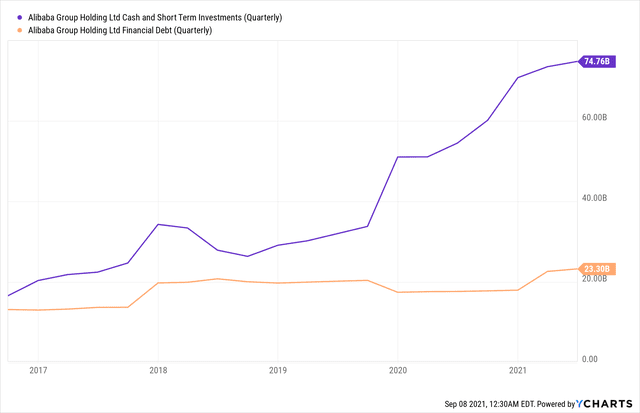 According to Wall Street analysts, growth will not be a problem for Alibaba. Over the next three years, Alibaba’s annual revenue is expected to double from ~$115B to ~$240B. Now, regulatory actions can derail Alibaba’s growth trajectory, but we will discuss them at a later point. 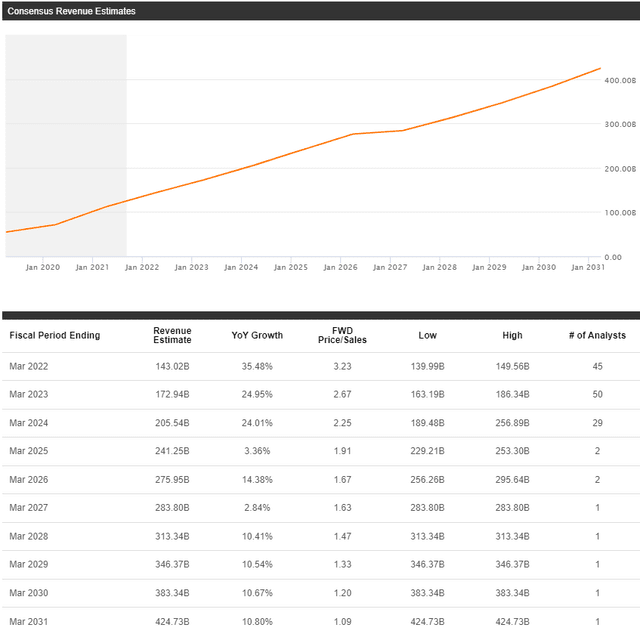 We will now determine Alibaba’s intrinsic value and project future returns based on our fundamental analysis and consensus analyst estimates for future revenue growth.

To determine Alibaba’s fair value, we will employ our proprietary valuation model. Here’s what it entails:

Today, Alibaba is generating massive amounts of operational cash flows; however, these numbers may look a lot different if the Chinese government continues its crackdown on technology companies. We will build our model based on current realities without trying to figure out Xi Jinping’s next move. According to consensus analyst estimates, Alibaba is poised to record $150B in revenues over the next 12 months on the back of strong performance in its core e-commerce businesses. Over the long term, Alibaba will be able to expand its free cash flow margins to ~25%; however, I must admit that this estimate may not materialize if the Chinese government hampers Alibaba’s expansion into higher-margin businesses. The other assumptions are pretty straightforward and self-explanatory. 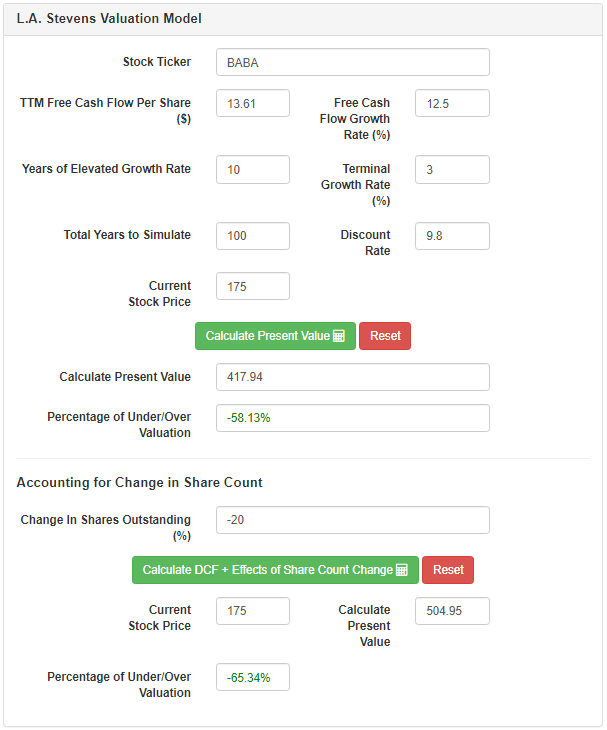 Based on its fundamentals, Alibaba is worth ~$505 per share. As of writing, the stock is trading at ~$175, which means Alibaba is undervalued by ~65%. If Alibaba were allowed to conduct business freely in China, my assumptions would prove to be conservative. Therefore, Alibaba may outperform my projections. To calculate the total expected return, we simply grow the above free cash flow per share at the aforementioned conservative growth rate, then assign a conservative Price-to-FCF multiple, i.e., 20x, to it for year-10. FYI, Alibaba was trading at a Price-to-FCF ratio of ~40x in early-2021. Using this conservative intrinsic value projection, we determine when and where to deploy our capital. Here are the results for Alibaba’s expected return: 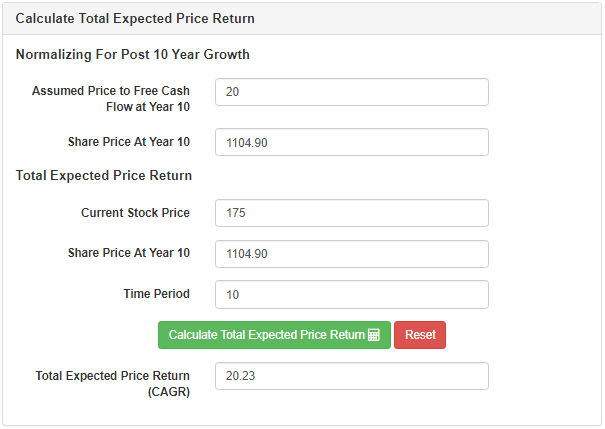 As you can see above, Alibaba’s stock price could grow from ~$175 to ~$1,100 at a CAGR of ~20% in the next 10 years. Now, these returns are significantly higher than my investment hurdle rate of 15%. Hence, Alibaba looks like a great buy at current valuations based on its business fundamentals. However, we must evaluate the risks involved while investing in Alibaba and, by extension, in China.

Risks: Too Many Unknowns

As per ownership data from Fintel, institutional investors (even long-term backers like BlackRock) are running for the exits in Alibaba (and other Chinese tech stocks) due to the ongoing regulatory crackdowns in China. 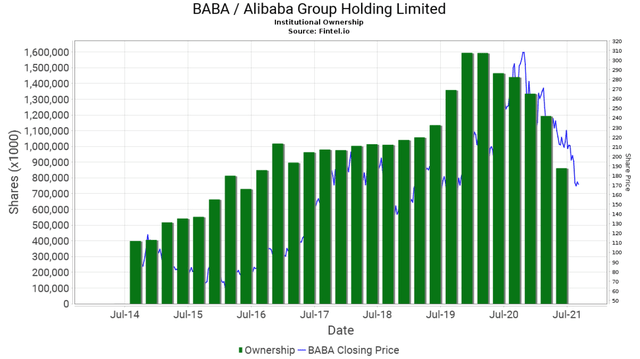 China’s President Xi Jinping and the ruling Chinese Communist Party are now chasing “common prosperity”, and their new five-year economic plan represents massive risks to large Chinese corporations like Alibaba that have monopolistic dominance in their sectors. In just the last few months, Alibaba has been fined $2.8B for its merchant policies (deemed monopolistic) in its e-commerce businesses, regulators have blocked Ant Group’s IPO (hurting Alibaba’s 30% ownership stake in Ant), China’s state firms have been ordered to switch from private cloud vendors (such as Alibaba) to government cloud services, Alibaba has pledged ~$15.5B towards the government’s “common prosperity” program, and now Alibaba and Tencent are being ordered to open their platforms to each other (breaking down the walled-garden Alibaba built for itself over the last two decades). With new regulations on technology companies popping out on an almost daily basis in China, I do not know what comes next for Alibaba. What if the Chinese government puts Alibaba under state ownership?

China is the second-largest economy in the world, and so, many investors have craved exposure to this country in the past (especially due to cheaper equity valuations). However, we now know why Chinese equities tend to trade at discounted valuations compared to their western peers. At this point, the fear of government intervention is extremely high, but things may change after CCP’s 20th National Party Congress. Although a distant possibility, President Xi will likely stop his attacks on the technology sector once he has solidified his hold over CCP and China in 2022.

Now, redistribution of wealth under the “common prosperity” initiative may hurt Alibaba’s business in the near term; however, as spending power increases for a larger percentage of China’s population, consumption will increase, and Alibaba’s core e-commerce business will thrive with increased consumer spending. Therefore, Alibaba could be a big beneficiary from the ongoing technology crackdown in the long run. For investors that believe in this strategic rationale, I think buying Alibaba’s stock through a dollar-cost averaging plan over the next 12-18 months is a fine investment idea. Although I think Alibaba will survive the ongoing government onslaughts, I am not buying Alibaba because I do not know what I would be owning. My biggest fear is state-ownership for the likes of Alibaba and Tencent.

The Technical Chart Is Finely Poised 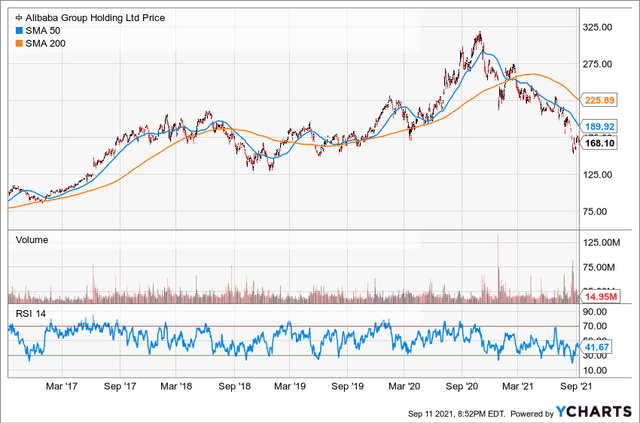 Alibaba’s stock has slid by nearly ~50% (off its all-time highs) since Jack Ma’s infamous speech at Bund Summit back in Oct-2020. The stock now sits at a multi-year support zone, and we did see a small bounce from ~$150. However, this may have been a dead cat bounce, and the stock is firmly stuck in the falling wedge pattern. If Alibaba breaks the $150 zone, we could even see Alibaba trade in the double digits. With institutional investors like BlackRock dumping the stock last quarter, anything is possible. For a recovery, Alibaba’s stock will need to go through a mighty accumulation phase, and institutional investors seem uninterested for now. Hence, I am watching Alibaba here with great caution.

Ten years from now, Alibaba’s stock (at today’s valuation) could look like an absolute bargain. We know for sure that Alibaba Group is no Luckin Coffee (a fraud company). Alibaba is one of the largest corporations in the second-largest economy in the world. Hence, investing in Alibaba at this dirt-cheap valuation should be an easy decision. From a very long-term perspective, I think the regulatory fears will eventually fade out, and Alibaba will survive the ongoing government onslaught. However, I have no intention of making an exception to our (Beating The Market’s) long-standing “No Chinese stocks” investing policy because the risk is just unnecessary. We have several fantastic equity investment opportunities in the US markets that offer better returns than Alibaba and do not come with similar levels of regulatory and governmental interference risks. One such stock is Amazon, and I presented my bull thesis on the company in my recent SA note: “Amazon vs. Microsoft: Two Cloud Computing Giants, One Winning Stock”. Amazon is available at a steep discount (not as deep as Alibaba), but it could also generate 20% CAGR returns over the next decade. Both Amazon and Alibaba command similar trading multiples (P/S ratios of 3.7x), and if you are pondering an investment in Alibaba, give Amazon a consideration before doing so. From here, Alibaba could turn out to be a massive opportunity or a tragic mistake; however, I am not going to make a bet on it either way because there are tons of other opportunities to generate alpha at lower risk.