Alibaba: Only One Thing Matters; Lessons From History 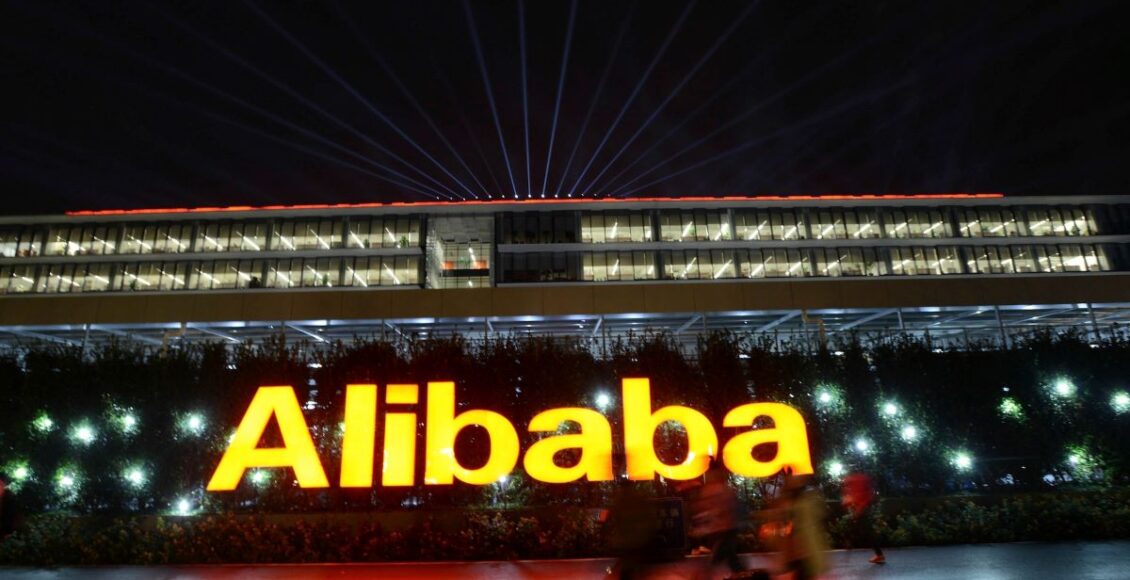 Alibaba Group Holdings and other Chinese ADRs have been trading lower in the last few months following increased regulation coming from China. The stock is cheap by most valuation metrics and has a great future outlook, but is this enough?

Tensions between DC and Beijing are intensifying and the stage is set for continued hostilities between the two world superpowers. While the CCP is interested in Alibaba’s growth, the company may get caught in the middle of a messy trade war and historical evidence shows that BABA’s stock will not be able to rally under these geopolitical conditions.

What’s up with BABA?

Alibaba has performed rather poorly in the last 16 months, and much of this can be attributed to the increased scrutiny the CCP has placed on the company: 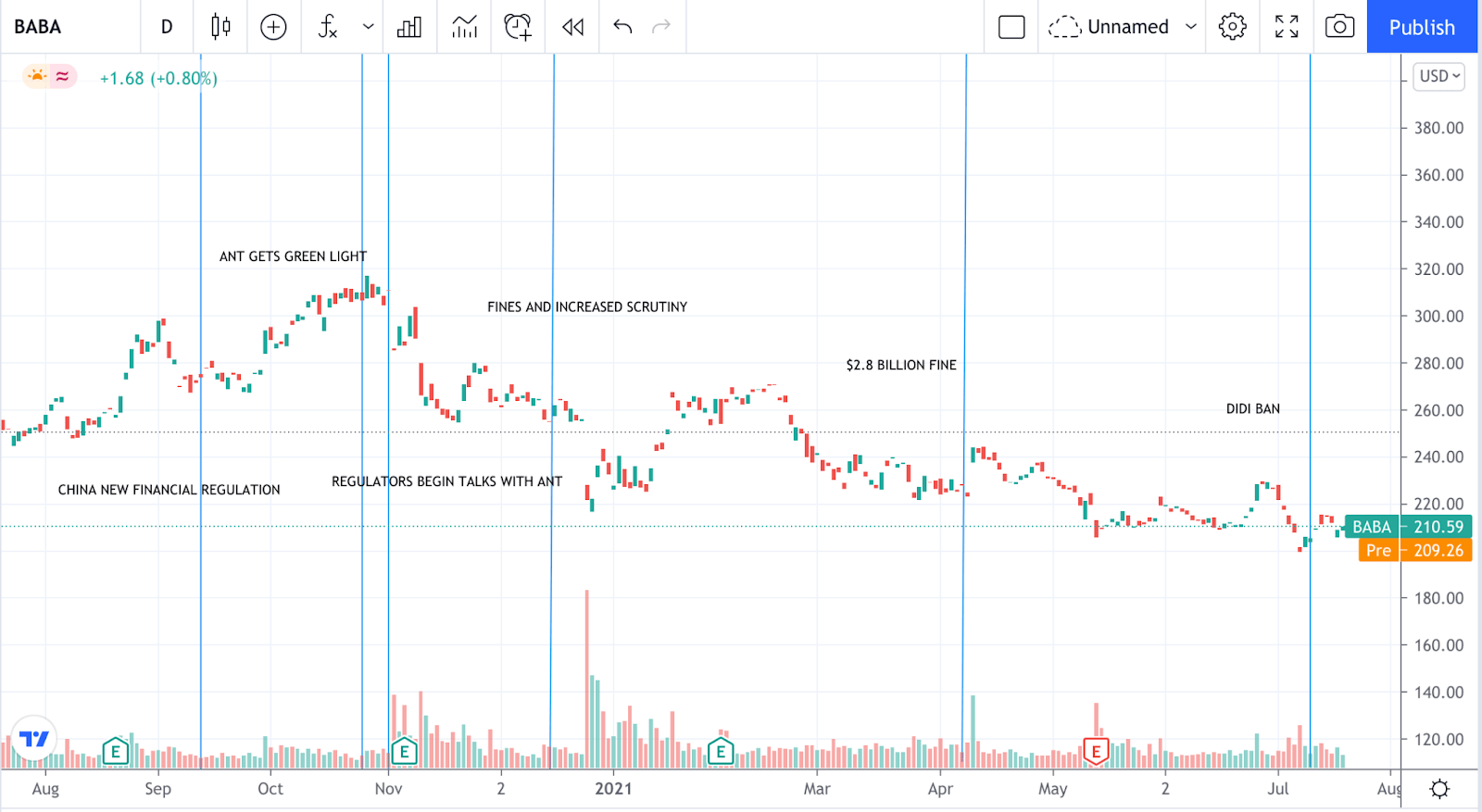 BABA’s stock price is quite closely correlated to events surrounding its business. BABA achieved an all-time high back in October of 2020, following the news that Ant Financial was good to go on its IPO plans. However, not long after that, regulators began talks with BABA and as soon as November 3rd, the IPO was officially halted, causing Alibaba’s stock to tumble over 30%. This was followed by increased scrutiny and fines.

In April, BABA was fined $2.8 billion by the CCP. A slap on the wrist for BABA, but a sign of things to come. The stock actually rallied on the news, probably due to investors expecting a larger fine. Since then, BABA has continued to fall, despite higher highs in US markets, and the latest actions by Beijing against DiDi Global Inc, (DIDI) have certainly not helped.

Why is China doing this?

The first question that arises is why is China doing this to Alibaba? The CCP wants the company to thrive, both locally and internationally, but there is a very specific issue which the company can’t tolerate.

WeChat and AliPay have become the most common methods of payment in China. Indeed, the country has undergone a fintech revolution like no other, which is great for the economy and its people but makes it a lot harder for the CCP to track transactions. Here lies the key to Ant Financial’s halted IPO and posterior restructuring. The Chinese government wants to have control over the transactions that occur within its borders.

It’s not that China has something against BABA, it simply wants to be able to keep a tight grip on its citizens. Will this stunt BABA0s growth? Possibly, but it is a small price to pay to keep on the good side of the CCP. Ultimately though, investors need to understand that China wants BABA to succeed, and that, perhaps, the biggest threat the company faces is coming from abroad, rather than from its government.

BABA’s problems with China seemingly reached an end after the $2.8 billion fine imposed on them. Since then, we have seen positive news such as the acquisition of Welbilt, as well as the fact that BABA and Tencent Holdings (OTCPK:TCEHY), will be opening up their ecosystems to each other. However, the stock continues to slide, and there’s a good reason for it.

Despite hopes that the Biden administration would improve the sour relationships between the US and China, nothing could be further from the truth. In the last 3 months, we have seen the white House take significant punitive action against Beijing.

On June 14th, China was declared a “global security challenge” by NATO. On the 23rd of June, the US banned solar panel imports from Xinjiang. A few weeks later, on July 9th, the US added 23 Chinese companies to its economic blacklist. Finally, on the 14th of July, the Senate passed a bill to ban all products from Xinjiang.

Under this geopolitical environment, it’s not surprising that BABA cannot rally, and this is something we witnessed under the Trump administration too: 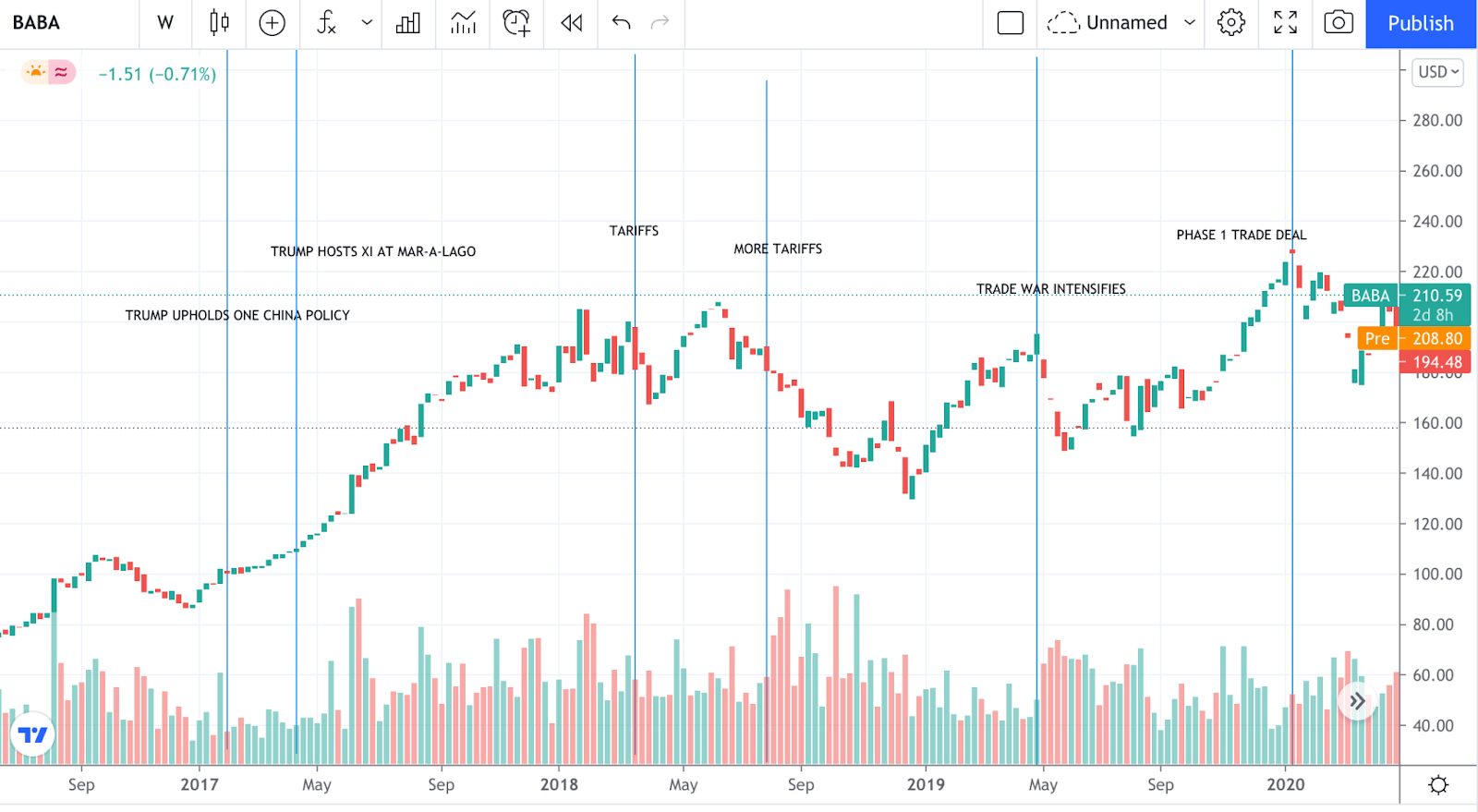 The last time BABA rallied convincingly, except the months following the COVID 19 outbreak, was in 2017-2018. This period was, in terms of China-US relations, uneventful. The Trump administration was still getting settled in and for all intents and purposes “playing nice” with China. Trump recognized the “one China policy” and later invited Xi to Mar-a-Lago. Good earnings result together with some optimism that China and the US might get along allowed BABA to rally up to nearly $220/share, but this quickly changed.

On March 28th, Trump imposed his first round of tariffs, which would then be reinforced in July. The trade war intensified in May 2019, when tariffs were raised to 25%. However, BABA managed to finish the year roughly where it began as China and the US signed Phase 1 of the Trade Deal.

What we see here is a very strong relationship between Alibaba’s stock price and the geopolitical news surrounding China and the US.

BABA is great on paper, but does that matter?

It’s quite obvious that, at today’s price, BABA is incredibly undervalued. The stock trades at just over 20x earnings, but forward EPS growth over the next 3-5 years is expected to be close to 30%. BABA has a strong and diversified business and is supported by the growth of the Chinese economy.

Most importantly though, BABA has one of the most solid moats in the market. Its size and scale allow it to turn a profit where others couldn’t. BABA also benefits from a network effect, being able to increase its users and revenue without increasing costs that much. And of course, any competition that comes its way can be swiftly bought up. But does this matter anymore?

BABA has shown encouraging earnings in the last few years and amazing growth, and yet the stock today sits below its 2018 high. Growth, valuation and profitability can move the stock somewhat, but the charts above make it clear that perhaps the most significant metric for investors when it comes to BABA, is the state of Chinese US relations.

BABA, China and the US: What’s next?

The most important question for those analyzing BABA is where China-US relations will be heading in the next few years. If today’s actions are any indication, it doesn’t look like relations will improve, and this time around things are different than before.

For starters, the COVID outbreak has shown China’s lack of transparency and concern for its international allies. The events surrounding the Wuhan lab have not been properly examined yet, and China has not been cooperative. On top of that, tensions continue to mount over the Taiwan situation, and China doesn’t seem to be backing down.

But what’s different this time? For years, it seemed like China and the US were amicable. There has been open trade and intellectual cooperation between both countries, but their interests are no longer aligned.

According to recent reports, China’s GDP is set to overtake that of the US by 2028. The country is no longer a developing nation, but a serious contender to global economic dominance, and then the only thing standing in its way, is the USA.

The launch of the digital Yuan is the latest in a long list of moves to dethrone and replace the US and the dollar at the centre of international finances and trade. Of course, another weapon to do this is directly hampering the US economy. 20 years ago, an all-out trade or even currency war, wouldn’t have benefitted China, but now the East may have the upper hand.

Ultimately, this spells trouble for Alibaba and other Chinese stocks. The biggest threat though, isn’t like many think, that the CCP will take them over or cut their wings, the biggest risk is that they will be caught in the middle of a trade war. If anything, we may see the US administration try to impose sanctions and limit the reach of China’s tech companies. The US government is a bigger threat to Alibaba than China.

Alibaba is a great company, but the stock does not follow the usual “fundamentals” of earnings and growth. Unfortunately, this company will be caught in the middle of a trade-currency war that, in my opinion, may just be getting started.