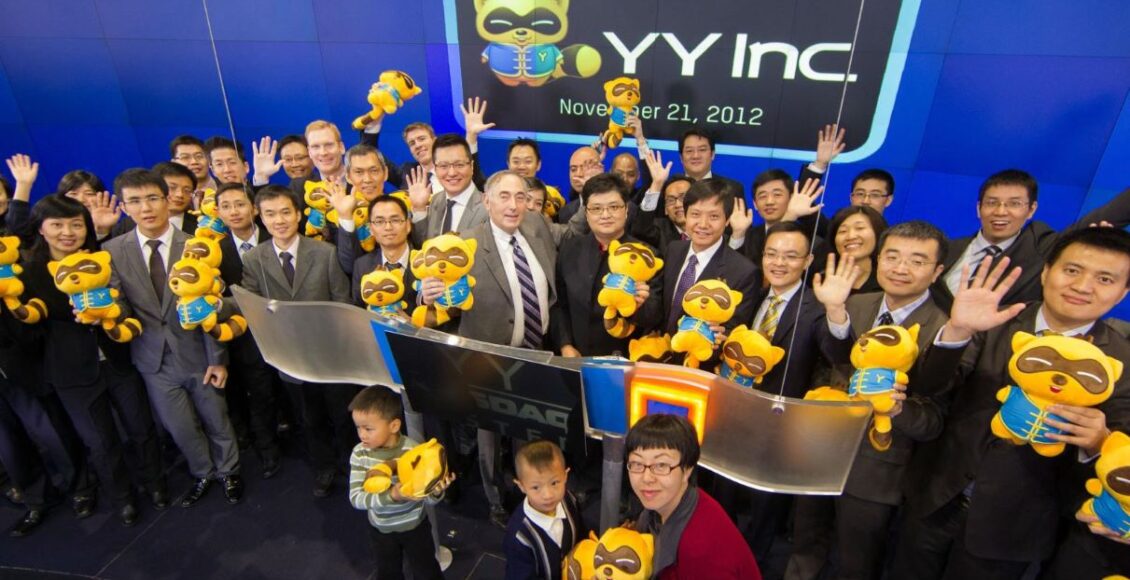 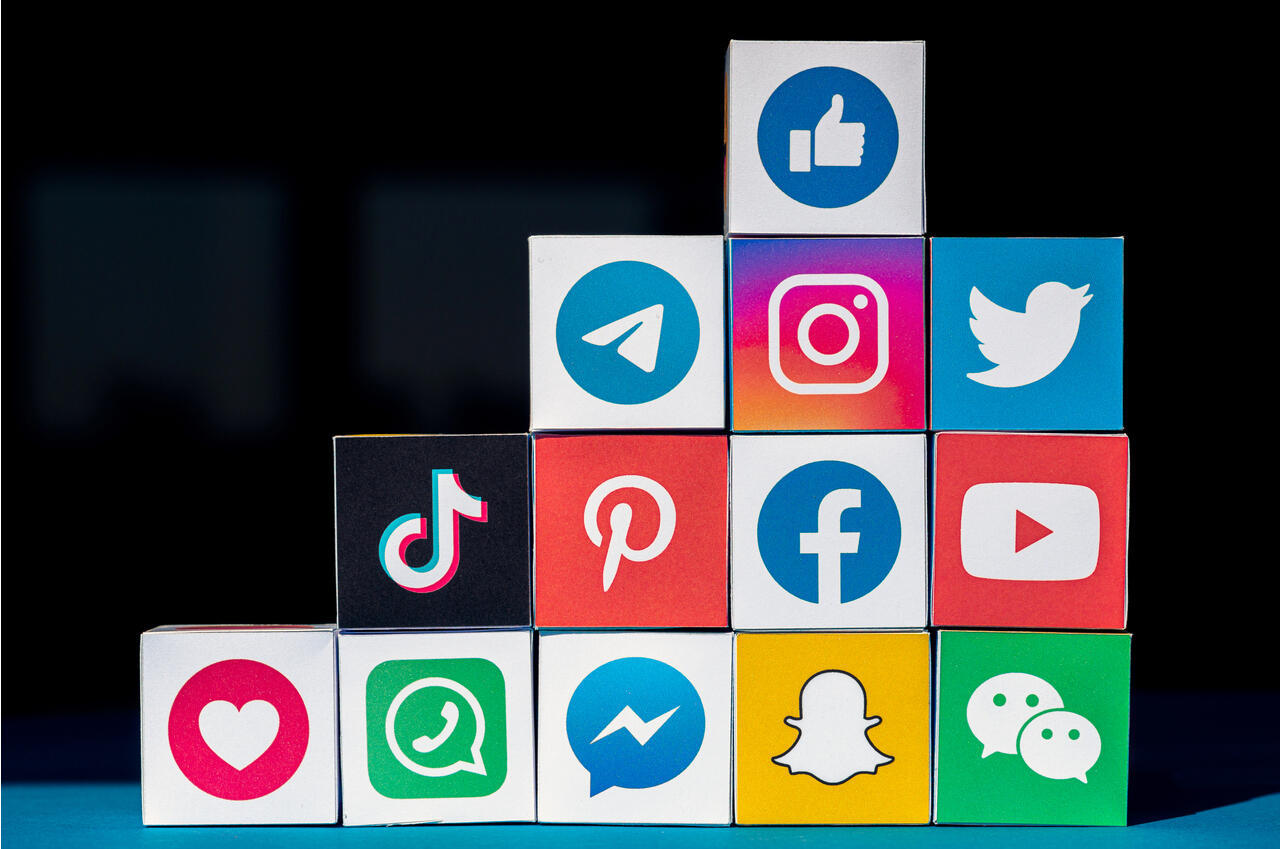 JOYY Inc. (YY) dipped more than 50% since Feb 16th; however, this might not be the bottom. The company has been struggling to improve its operating margins in a highly competitive sector. The trend does not show that its Apps will become the most popular among its peers. Considering a realistic discounted cash flow analysis, the price at current levels presents a negative asymmetrical risk rate between potential gain and loss. 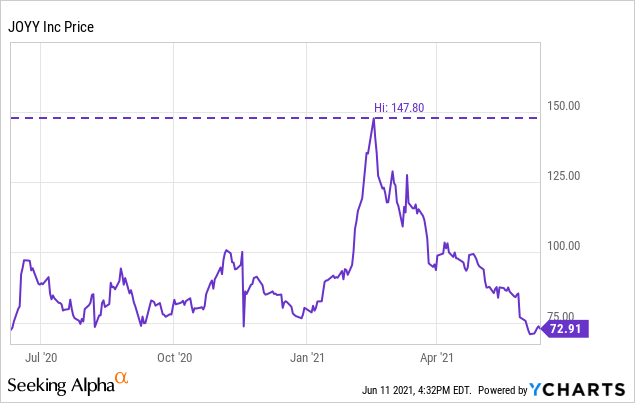 Last year, JOYY faced some challenges besides the pandemic. India banned JOYY’s apps – Bigo Live, Likee, and Hago – from operating in the country, and a famous short-seller, Muddy Waters, released a report with serious fraud accusations against JOYY, which could jeopardize the selling deal of YY Live to Baidu Inc. (BIDU) if the latter reaches the same conclusion during buy-side diligences. Nevertheless, it appears so far that Baidu decided to keep the purchase as announced in JOYY’s 1Q21 6-K filing:

Subsequently, the sale was substantially completed on February 8, 2021, with certain customary matters remaining to be completed in the near future.

JOYY presented a strong revenue growth in the 1Q21, but still accumulated losses if not considering discontinuing operations. JOYY’s gross margin has been falling since 2015 and its operating expenses climbing. For that reason, its earnings from continuing operations turned negative in 2019. 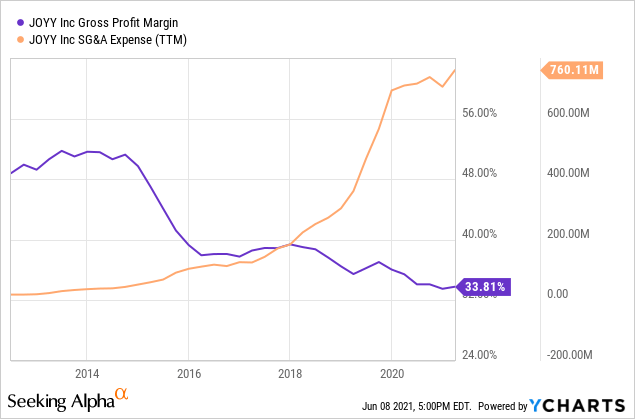 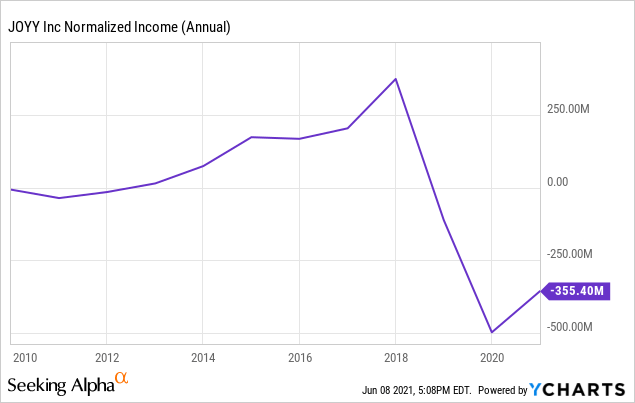 During the Earnings Conference Call on May 27, David Xueling Li, JOYY’s CEO, expressed that the high spending in advertising to gain market share has to end. Later on, he said those spendings would be reallocated to research and development, hence the operating margins would not be significantly positively affected.

Another statement made by the CEO, regarding new business initiatives, was vague and revealed that the company does not have, at the moment, a strong strategy to develop new ideas and products that could ultimately give them a competitive advantage:

For new business initiatives, we discussed on the last call that we will stay attuned to new opportunities in the cross-border e-commerce sector, and that we have made some preliminary explorations in cloud-based audio and the video enterprise services.

As we continue to explore such new market opportunities, we plan to gradually build up our competitive advantage in our products and technologies. We will provide further updates when our new business initiatives progress to further maturity.

Furthermore, the CEO showed mixed feelings about monetization from advertising, assuming that the dominance of Google and Facebook makes it costly to establish an independent platform:

As for advertising, we have been actively exploring in this sector as well. But we need to admit that even if we can achieve a certain scale from our global advertising revenues, it would still be very challenging for anyone to try to make advertising as a primary source of our revenue.

You probably know that in the whole industry, we need to rely on Google and Facebook who are the two dominant platforms in terms of advertising, And if you like to start independent platform, you need very heavy investment into sales and marketing, probably hiring tens of thousands of sales and marketing staff to make sure that you’ve got sufficient source of sales — of advertising customers. So, we do not see that that would be achieved within a short period of time.

The company’s challenge is to gain economy of scale by increasing revenue more than the costs and expenses to obtain the new revenue stream. The competition and the geopolitical dynamics increase the adversities to reach this goal. 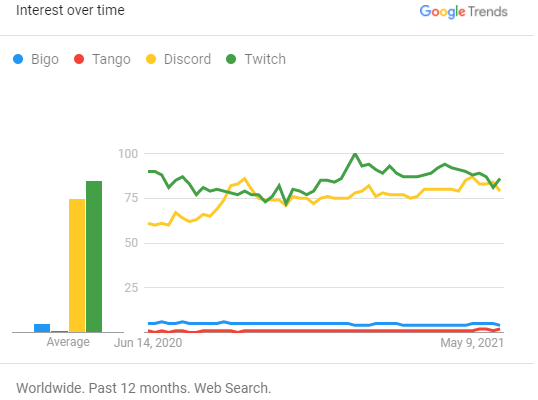 This is reinforced by comparing the average number of countries in each ranking, considering each app within its category, from both Apple Store and Google Play downloads. As we can see, Bigo Live is only among the top 10 apps in 23 countries, while Discord and Twitch are in 82 and 31 countries respectively.

Let’s look at how Likee is doing. The interest for Likee is low, while for TikTok, its most important competitor, it is much higher and increasing over time. 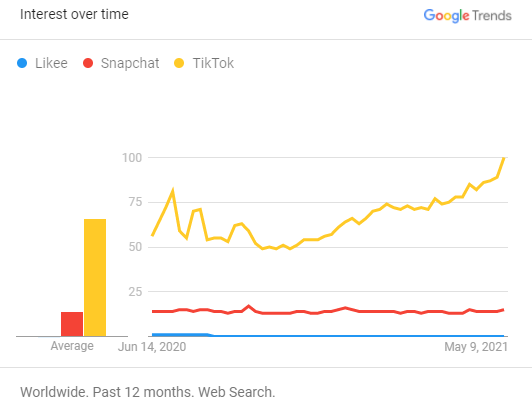 Reproducing the same ranking comparison for these apps, Likee is only among the top 10 apps in 19 countries, while TikTok and Snapchat are both in 87 countries.

Reasoning about the comparisons, JOYY’s apps lack worldwide popularity even though the company has been aggressively spending on sales and marketing activities.

Regarding monetization, the BIGO segment, which is responsible for more than 90% of all JOYY’s revenue, has presented stronger results according to 1Q21 results. The average revenue per paying user increased by 26.4% to US$290.7 from US$230.0. The total number of paying users reached 1.67 million, which represents 0.7 million additional paying users.

The results seem interesting at first glance, but the sales and marketing expenses for the segment totalized US$125.02 million, which means that JOYY spent US$ 178.57 per new paying user, but they only generated US$95.66 on average in gross profit (32.91% of US$290.7), considering 1Q21 results. It would be necessary to almost double the average revenue per paying user or the conversion rate to offset the costs of prospecting them.

Therefore, JOYY has a hard task to gain economy of scale and become a profitable business again.

The optimistic model resulted in a fair value pretty close to the Wall St Analysts Rating’s price target of US$ 124.79. It looks like the market was pricing JOYY assuming a blue sky scenario when its stocks reached US$ 147.80 per share in February. Nevertheless, I’m not confident in the company’s ability to generate value to justify those price ranges for the reasons that were mentioned before, like low worldwide popularity, no competitive advantage, and the negative geopolitical dynamics regarding cybersecurity that could result in new bans.

The realistic price is aligned with the current price levels. It seems there’s no upside to profit from.

From the current levels, the stock price has to drop 37.14% to reach the pessimistic target price. As stated above, JOYY faces many challenges, and this scenario has a high probability to happen.

All three scenarios consider the proceeds from the YY Live sale to Baidu, which represents alone US$ 45.01 per share. The uncertainty is if JOYY will be able to turn Bigo Live and its other apps into a profitable and sustainable business.

The ocean looks red right now and, among other obstacles, buying JOYY at the current price is a high-risk investment.

Considering the realistic scenario, the asymmetrical risk of going long is below 1, hence the investment right now does not have a positive risk asymmetry.

Despite the fact that JOYY dropped more than 50% from its peak, the price is not cheap enough to justify the purchase. The company has been struggling to keep its operational margins positives and its apps are not among the most popular. Geopolitical tensions can harm JOYY’s user base even more if its apps are banned from other countries.

Investors should consider going long if prices fall under $45.83.

China EV: Tesla rival NIO plans to build a total of 4,000 battery-swap stations by 2025 as sales pick up

China’s manufacturing PMI edges down to 50.9 in June…