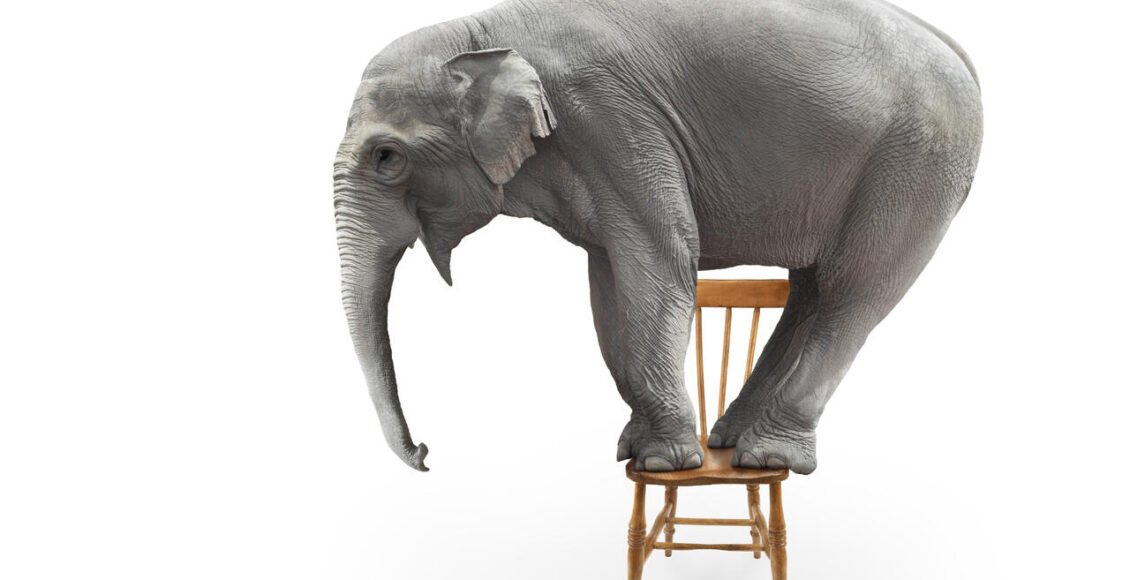 The below analysis of Tencent’s earnings is based on the following materials: 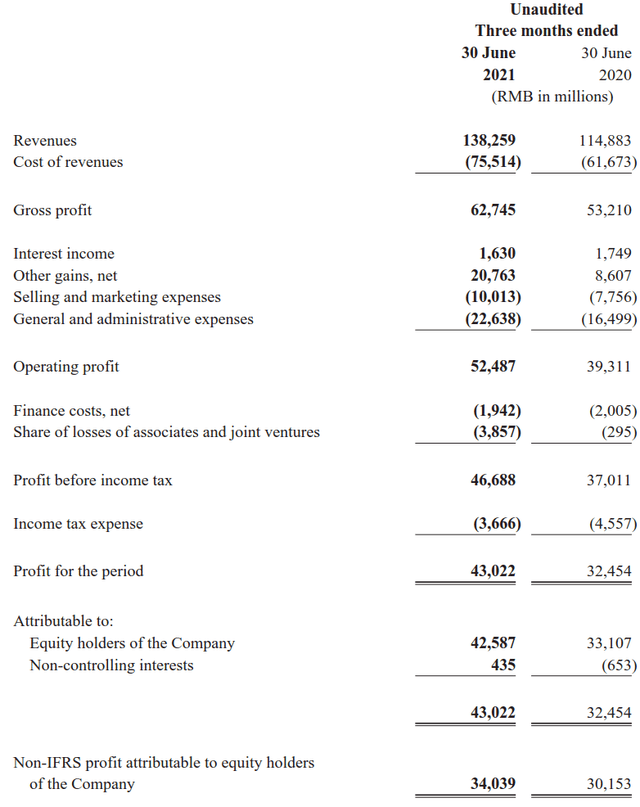 Consensus had almost nailed revenues of RMB 138B, but had substantially underestimated profits. As usual, the really massive beat was in IFRS earnings (which include profits and fair value adjustments from investee companies): Tencent posted a nice 26% increase YoY – despite the difficult comp and 2021 being a “reinvestment year” due to regulatory pressures.

However, YoY growth was good even for non-IFRS earnings which increased 13%.

Profits from investee companies increased from RMB 16B in the prior-year quarter to a nice RMB 20B in Q2/21, not far below the Q1/21 level. These profits are obviously highly volatile by nature. In this quarter, Chinese tech assets suffered from the regulatory pressure and a stock market sell-off in the tech sector, which makes the strong earnings contribution even more impressive. Over the past ten quarters, the average profit contribution was RMB 13.25B. And these quarters include the pandemic.

Operationally, given the regulatory pressure and the announcement of partial reinvestment of profits, analysts were expecting lower profit margins, yet the non-IFRS net margin was down just 1.8% to 25.4%, and the IFRS margin increased from 28% to 31%.

On the call, analysts were clearly trying to gauge how the new wave of regulations would impact margins, but management seemed not too worried about the long-term margin trajectory, and for good reasons:

“In terms of longer term impact, I would say our margin profile has always driven by our overall strategy of a combination of different components. One is monetization of profitable businesses, which usually the monetization from our side is actually a restraint. And then, we’ll have free services, which could be monetized over time. And then we also have loss-making businesses, which by now are actually quite significant, but they would actually over time hopefully, narrow losses and over time, be able to generate some profit.

This overall strategic mix has been actually been quite consistent over the past many years, and we intend to keep this strategy stable, which means that our earnings profile, I would say, over time would continue to be relatively stable, although there will be some short-term fluctuations.”

There is, in fact, huge untapped monetization potential everywhere you look, and Tencent is clearly focused on the long term. What this ultimately means for those much discussed, mysterious reinvestments of profits is that there is hardly any change to the underlying business strategy:

“And at this point in time, I think what’s more important is really to measure whether we are or are not delivering on those reinvestments, meaning that from our perspective, when we look at our enterprise initiatives, the fact that our Business Services revenue growth accelerated so sharply, the fact that we’re seeing very strong user growth for Tencent Docs, and for WeCom, and for Tencent Meeting gives us a degree of confidence that we’re moving in the right direction. For our investments in game studios and game content, the fact that our international game revenue growth grew 37% year on year, the fact that we’re, for the first time, successfully penetrating the Nintendo Switch opportunity, the first time moving into the Japanese market, give us a degree of confidence we’re moving in the right directions for games.

And then for short video, the increases in DAU and time spent on the Weixin video accounts, we believe signal that we’re moving in the right direction. So in terms of where that shakes out from a bottom line perspective in the next two quarters or the next six quarters, there’s a huge number of moving parts. Some of them are within our control. Some of them are outside our control.”

As I said in my Q1/21 update, these “reinvestments” look a lot like plain and simply growth initiatives, although it might take more time to see results:

“But we’re less focused on those short-term moving parts, and we’re more focused on what are the businesses we are building five, 10 years from now. And we firmly believe that if you look at our enterprise software suite, we have the products too with analogues of Zoom and Shopify and arguably Microsoft Office in China, which is a very good place to be. If you look at our video accounts, we have an opportunity to drive longer-term advertising revenue growth at substantial scale. If you look at our game business, we have the opportunity to aggressively reposition this from a primarily China-centric business to a truly global business and therefore, more than triple our addressable market for the game business group.

So that’s our focus really around that longer-term opportunity rather than optimizing for the next two or six quarters.”

Importantly, international game revenues were up 37%, highlighting the huge, mostly untapped potential Tencent has outside of China, which is becoming a significant contributor to overall revenues, reaching 25% of total games revenues in the quarter.

This is clearly the elephant or better mammoth in the room – and in my opinion, the real size of the issue is more like a giraffe or a cow.

As management stated on the call, China is actually ahead of the rest of the world when it comes to regulating the internet. At the beginning of this year, we have all seen what can happen when social networks are left to auto-regulation. Personally, I find it quite funny when investors fret about regulations against monopolistic, illegal, anti-competitive practices. I have yet to find one of those investors mad at the CCP’s interventionism that could explain why exactly such regulation should be bad for internet users. Investors appear to love innovation only as long as they are invested in the innovator, but then they tend to become rent-seekers at the expense of further innovation and of increasingly squeezed users.

There are multiple fear-mongering headlines about Tencent “expecting more regulations”. – So what? – This company is one of the major players in a highly disruptive, highly innovative sector, which means that more, tighter regulation is simply part of the game. And it doesn’t have to be bad for the behemoth’s business, as long as it is highly diversified, able to rejuvenate, adapt, and innovate continuously.

Only if the internet remains a good and safe place for users, a business that lives and thrives in the internet has everything it needs to do well.

– You may ask: And what about the harsh destruction of the after-school tuition businesses? – Well, as hard as it may sound, those were actually destroying children and families. The problem is not the intervention, but that it came too late.

Earlier this year there was a lot of fear about advertising revenues, which might be reduced due to limits imposed on data collection and ad targeting, even more so since Apple (AAPL) was about to introduce important changes to its IDFA system (which “appear to have had less impact in China than widely expected”, as the company stated on the call). And now investors fret about major clients (the after-school tuition companies) sharply reducing their ad budgets. In the meantime, online advertising revenues grew from RMB 16.4B in Q2/19 to RMB 18.5B in Q2/20 and to RMB 22.8B in Q2/21.

What investors ignore is that Tencent is quite self-restrained when it comes to using its users’ data for its own short-term profit:

“At a high level, our assumption is that there could be fairly substantial changes in terms of the regulations around the use of data for advertising targeting purposes before those would have any meaningful negative impact on us simply because we have not been in nearly as aggressive as our Western peers or some of our local peers in terms of the granularity and the specificity of the ad targeting that we employ relative to the user data that we would potentially have access to.”

Another concern is taxes, as the preferential tax rate for innovative internet businesses is likely to be eliminated in many cases, but Tencent’s 11% tax rate is actually the result of

“a lot of non-IFRS adjustments such as nontaxable book profits on deemed disposal, disposal or other value valuation gains on investment. If we take out all this – all the non-IFRS adjustment that is what are the noises and withholding tax as well, the effective tax rate would have been approximately low teens for 2020 and mid-teens for 2021.”

Tencent has already lost the preferential tax status for most of its businesses, so the benefit has been fading away and there is not much left for any future impact. 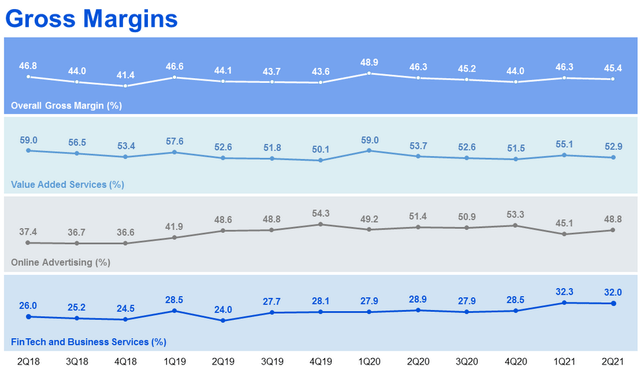 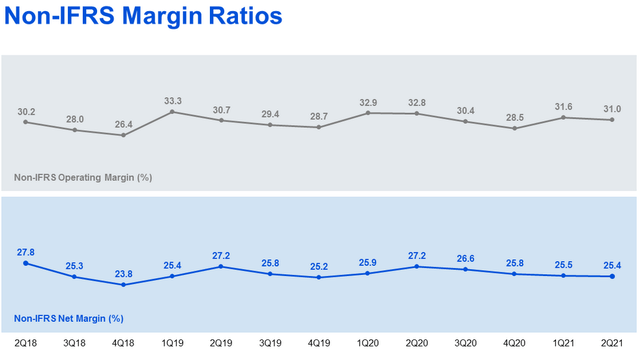 So far, there is not much to see: The non-IFRS operating margin was just about average for a second quarter. Fintech’s strong margins compensated for some minor weaknesses in VAS and Advertising.

Lumped together with gaming in the VAS segment are also video subscriptions and music subscriptions. The former grew 9% to 125 million subs, while the latter grew 41% YoY to 66 million subs. The overall number of paid subscriptions of 229 million (+13% YoY) also includes other subscription services, but compares well to Netflix’s 209 million paid memberships as of Q2/21. (Netflix’s market cap is about 40% of Tencent’s.)

The combined MAUs of Weixin and WeChat were up 3.8% and reached 1,251 million users – more than everybody with an internet access in China.

While this quarter delivered remarkably solid results, I still don’t expect any significant boost to sell-side estimates, given the regulatory background noise. The YoY comps in Q3/21 will remain tough, as the 2020 pandemic massively benefited Tencent and some of the incremental profits will be reinvested (which is good for the long term, but bad for near-term quarterly results).

As I said in my Q1/21 update, after this year of investments Tencent will be an even stronger company. The market is currently afraid of a permanent margin impairment and cannot (yet) figure out the future growth trajectory. However, a permanent margin impairment is not what management is signaling and what shows up in Q2/21 results. And it is probably not even what the CCP wants: It simply doesn’t want its internet giants to become lazy rent-seekers – which is something long-term investors in these companies should appreciate, not fear.

The company trades for just below 20 times annualized H1 earnings, which looks very cheap, given its excellent market position, the strong balance sheet, the long growth runway ahead and the many businesses where it is currently under-earning. Moreover, close to half of the market cap is backed up by the company’s investments in other listed companies. (The counterargument here is that Tencent can’t easily monetize these investments without impacting their market prices, which would justify a large conglomerate discount.) We don’t need outrageous growth assumptions to project excellent results for an investment at these levels.

That said, the market will likely continue to apply an extra dose of caution for some quarters at least.

Personally, I have added to my Naspers stake yesterday. For several, likely transitory reasons Naspers trades at a ~60% discount to its NAV, so you can buy the already cheap Tencent even cheaper for a mouthwatering look-through price-earnings multiple of just 8x. At these levels, the NAV discount is unlikely to widen much further, so you should get at least the same returns as a Tencent investor – plus the chance on a narrowing discount.