Tencent Holdings Ltd’s buyback spree is failing to revive investor sentiment over the online gaming giant, whose shares are languishing near a 2018 low.

Tencent, China’s biggest company by market capitalization, has spent nearly $1 billion in repurchasing shares over the past month to take the year’s total to $2.3 billion, Bloomberg data shows. The move gathered pace after its dominant shareholder Prosus NV said in late June that it will gradually offload holdings.

Despite daily purchases this month, Tencent shares are down more than 60% from its peak in January 2021, shedding about $580 billion in the world’s largest loss in stock value since then, according to Bloomberg calculations. China’s deepening slowdown, regulatory uncertainties and belief that the days of unbridled tech revenue growth are over are key headwinds. 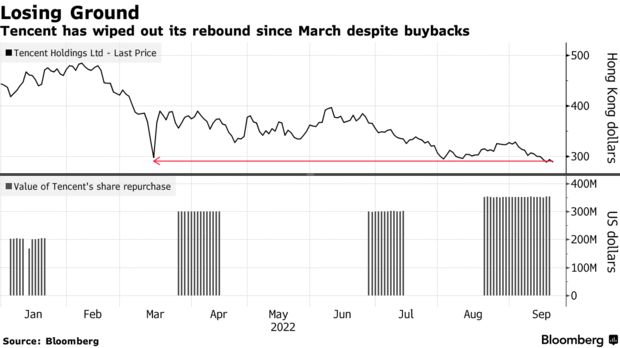 “Tencent is under pressure from the sale of shares by the major shareholder,” said Banny Lam, head of research at CEB International Investment Corp. “Buybacks help but aren’t providing enough support. It still needs some policy support from the government for a turnaround.”

Tencent reported its first-ever revenue decline in the second quarter as the company grappled with the economy’s downturn that’s hurting its major businesses. Even as investors see the worst of Beijing’s crackdown as over, as corroborated by the approval of Tencent’s new game last week, doubts over the firm’s growth prospects and selling by Prosus remain overhangs.

Prosus said on Sept. 8 that it sold 1.1 million shares, bringing down its total ownership in Tencent to 27.99%. An earlier filing showed Prosus sold more than 3.9 million shares in the first half.

Against this background, multiple reports — with the latest from the Wall Street Journal on Tuesday — have said Tencent is planning to divest more of its vast equity portfolio to fund buybacks and seek new growth drivers.

That’s adding to uncertainties for China’s tech sphere as Tencent is a significant shareholder for major firms including Meituan, Kuaishou Technology and Bilibili Inc.

Despite Tencent’s denial of the Journal report, shares of most investees slid in Hong Kong, with Meituan and Bilibili falling as much as 3.8%. Tencent fell 2%.