Zhang Jun, Tencent’s head of public relations, disputed a widely circulated post that suggested the company would weather another heavy blow from regulators in the near future. The account carrying the rumor has since been suspended, Zhang said on his semi-public WeChat feed.

“Ask me next time, at least that’s more legit. And I’m not afraid of going on record,” Zhang said, poking fun at the post citing an anonymous Tencent employee. Before its removal, the post was widely shared on Chinese social media and stock-trading forums. It hinted at another big step in China’s internet crackdown, without providing specifics. Tencent closed 5.2% lower on the day. 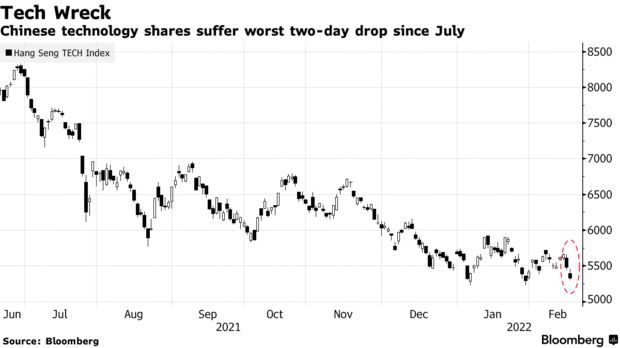 Chinese technology shares had their worst two-day drop since July due to renewed fears Beijing may roll out more restrictions for private enterprise. Traders pointed to everything from regulatory warnings over the weekend about scams in the metaverse — a virtual-reality based social media concept — to unsubstantiated talk about more curbs on the gaming industry. Tencent is a leader in metaverse development.

On Monday, a screenshot detailing the alleged new gaming curbs made waves on China’s internet. But Wang Guanran, an analyst with Citic Securities, clarified that the content was originally posted by him last year when regulators hosted study sessions on gaming regulations.

“I didn’t post anything today,” he said on his WeChat. The screenshot flagged more oversight of violent genres and concepts like anime and religion and limits on player spending on loot boxes.

China’s wealthy urged by Xi Jinping to ‘give back to…