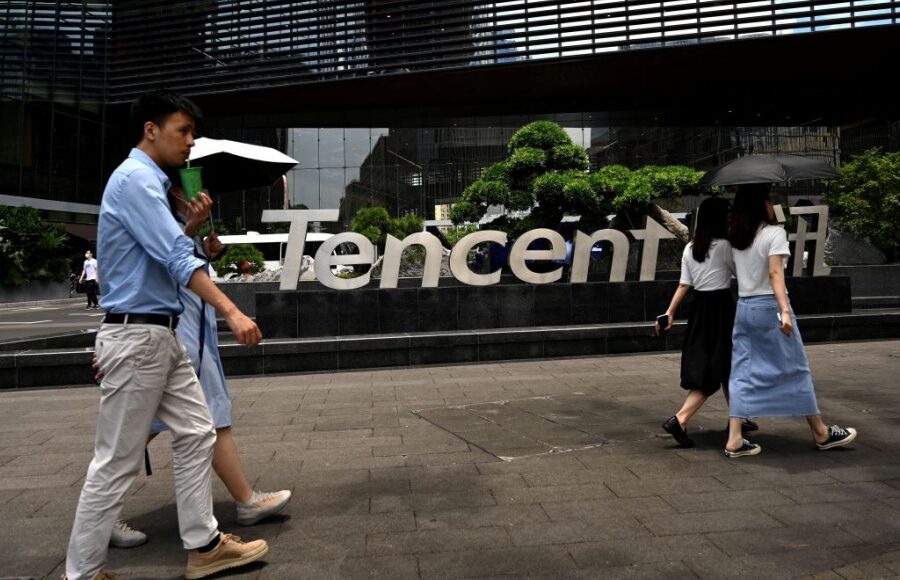 WeChat owner Tencent Holdings Ltd. has seen its shares fall by more than 25% in the first five weeks of Q3 2021, following several announcements by Chinese regulators that seem likely to impact Tencent’s businesses in online gaming, music, and online education. The share price is now more than 40% below its high in February this year, despite the ongoing dominance of its WeChat ecosystem and likely continued growth in revenue and earnings per user, even after accounting for these regulatory adjustments. As Tencent is one of the largest listed companies not only in China, but across emerging markets globally, I thought it was a good time to run a fresh valuation model on Tencent and take a big picture view of its likely upside vs downside over the next 10 years.

Note that even with this recent drawdown, Tencent has still been an excellent investment so far for longer-term shareholders, with a correction of this magnitude last seen in early 2018: 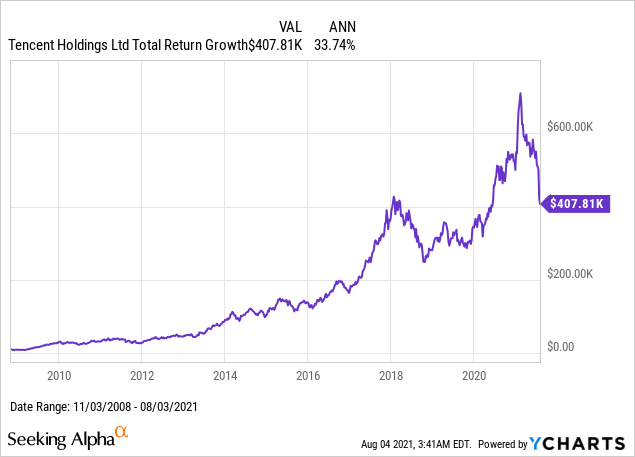 As of August 2nd 2021, Tencent was the 3rd largest holding in the iShares Core MSCI Emerging Markets ETF (IEMG) at 3.78% weight, and as of Vanguard’s last holdings reporting date on June 30th 2021 (just before the regulatory announcements), Tencent was the #1 largest holding in the Vanguard FTSE Emerging Markets ETF (VWO) at 5.18%. Given that Tencent’s ability to return profits to foreign shareholders over the next 10 years is likely to be in a similar boat to other Chinese companies, assessing the regulatory impact on Tencent’s revenues is also likely to be very material to other components of the iShares MSCI China ETF (MCHI), of which Tencent currently makes up 12.42%.

In order to assess how material regulatory changes will be to Tencent’s revenues and earnings, we need to start by looking at what percentage of Tencent’s revenues come from which business lines, and how each of those revenue sources is likely to grow or shrink going forward. One starting point for this is page 11 of their 2020 Annual Report (Investors – Tencent 腾讯), which I have attached as a full-page screenshot below. 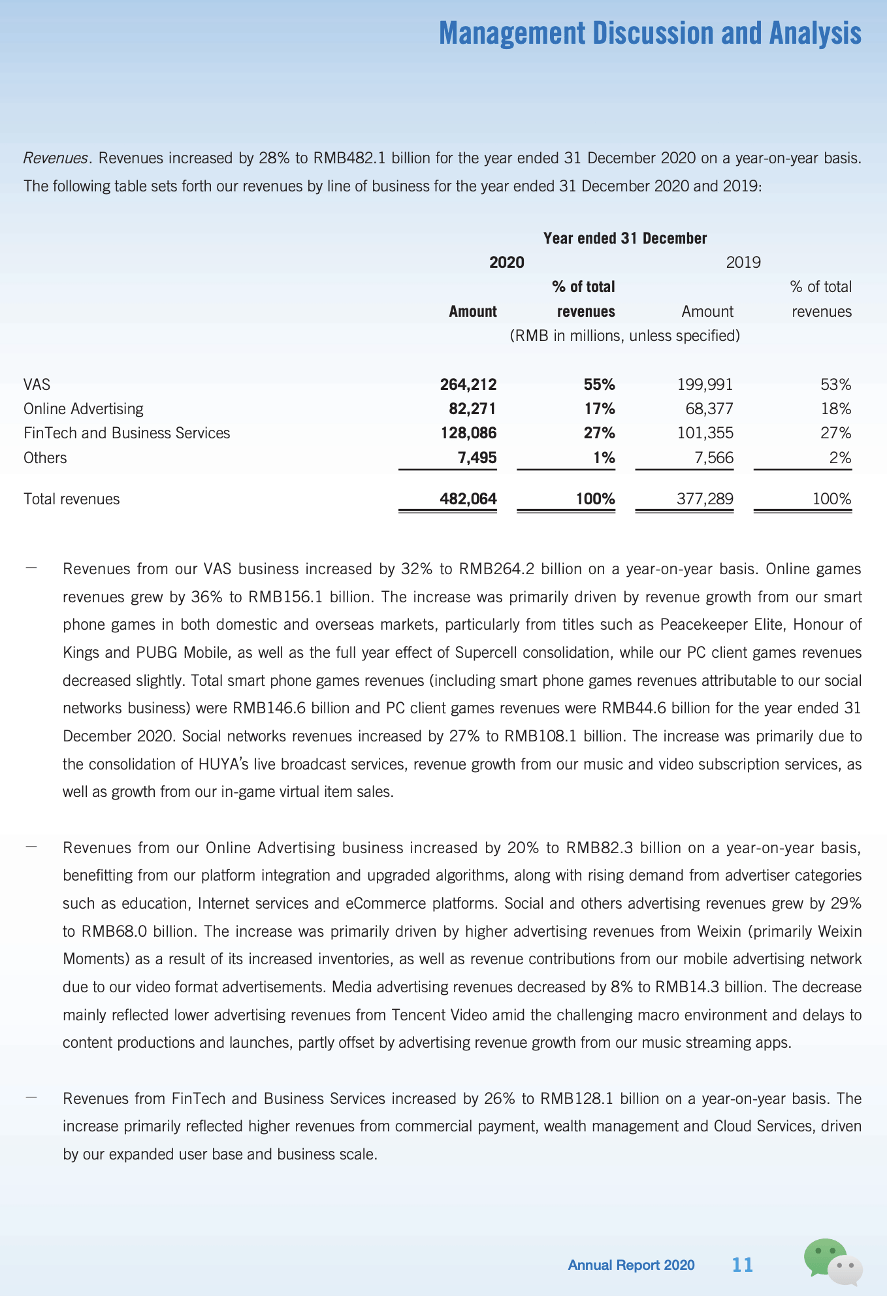 Over half of Tencent’s revenues come from “VAS” which stands for “Value-Added Services”, which we see in the notes further breaks down into about RMB 156 billion (or about 32% of total revenues) from online gaming, and the remaining RMB 108 billion (around 22% of total revenues) from what it classifies under “social network” revenues. VAS was the fastest growing portion of Tencent’s revenue from 2019 to 2020 (200 billion –> 264 billion is around 32% growth), and also reported (on page 12 of the same annual report) the highest gross margins of these four revenue categories, at 54% for VAS vs 51% for online advertising and 28% for FinTech and business services.

It is important to compare the above 2020 numbers with the 2019 numbers to get some idea of the outsized impact of the COVID-19 pandemic on gaming/VAS versus other revenue sources. From 2018 to 2019, “Fintech and Business Services” was the fastest growing segment. Even without the regulatory impact, it would make sense to expect future growth from online gaming revenues to look more like that of “relatively normal” 2019 rather than of a year defined by people being locked in their homes and resorting to online games as a substitute for other activities. 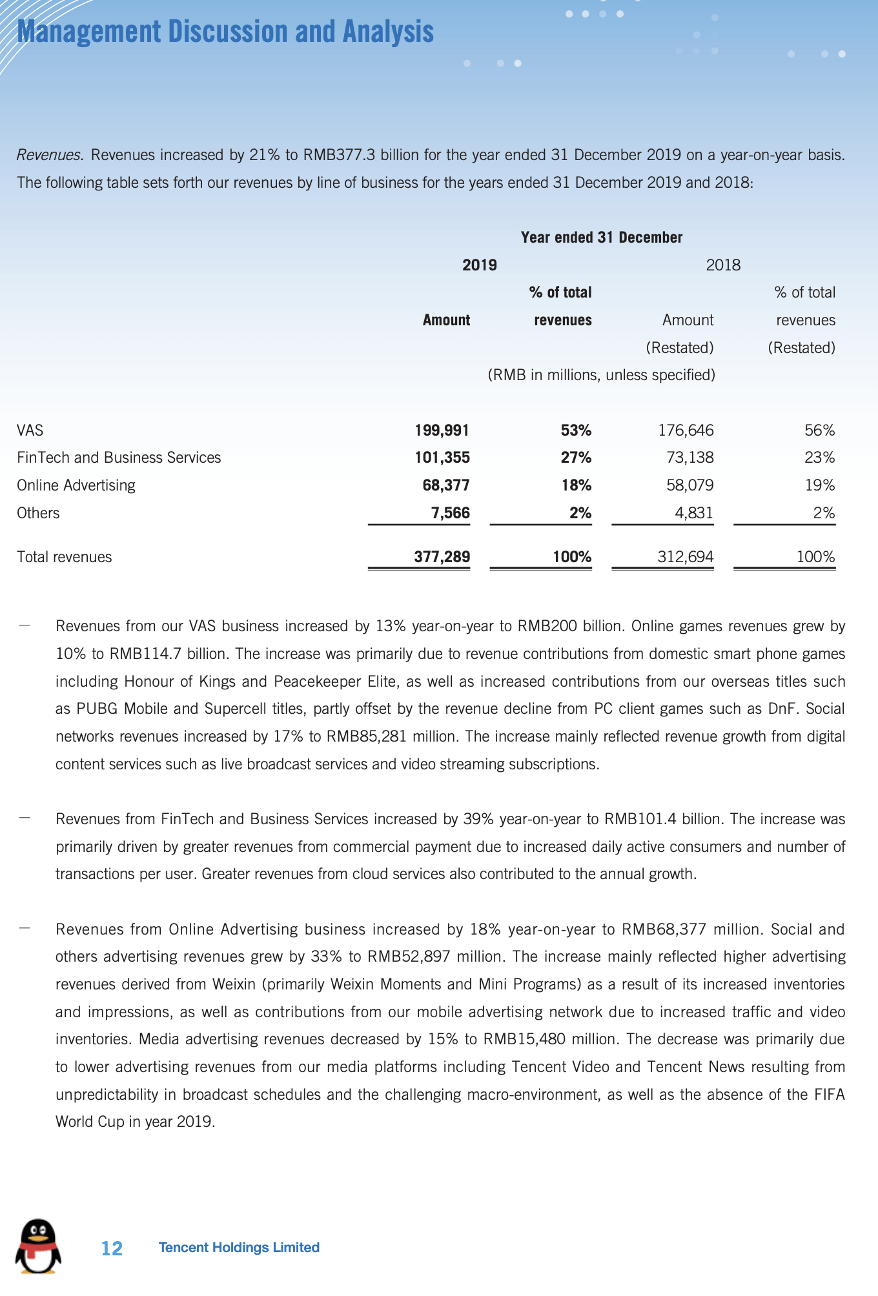 As this Reuters article explains, Tencent has experience self-regulating its users’ access to its online games, and I expect that with these adjustments, Tencent is more likely than not to continue to see growth in its gaming revenues, even if at a slower pace.

Even though my 13 year old probably knows more about Tencent’s gaming business from a customer appeal/stickiness perspective than I ever will, one of the main reasons I remain bullish on Tencent is that I believe they understand how to interface with users and adapt to different ways of using data better than almost any other entity in the world’s most populous economy. In other words, I am more bullish on Tencent’s ability to “gamify” (turn into a game-like experience) its many other services than I am just on its gaming business for the sake of gaming. One can imagine several ways in which gamification of shopping, saving for retirement, or corporate training could be innovated on in coming years, and how likely it is that Tencent will continue to lead those innovations in China.

Tencent’s business is so large and diversified, and subject to so many different variables and risks, that I believe a minimalist/oversimplified model with just a few numerical assumptions can be more useful than one that tries to make too many detailed guesses on which of Tencent’s business lines will grow or shrink over time. The Excel version of my Tencent model updated as of August 4th, 2021 can be downloaded using this link, and the summary of my assumptions and conclusions are:

At the bottom of the “Balance Sheet” tab in my Excel model, these assumptions are summed up into projections of Tencent’s book value and dividend growth each year between now and 2031, converted into Hong Kong dollars at an assumed constant exchange rate of CNY/HKD = 1.2000. Based on a HK$450 entry price and the above assumptions, we model an expected rate of return ((IRR)) of +14%/year in the bull case, +9%/year in the base case, and -8.1%/year in the bear case. Below are the year-by-year projections of book value, dividends, and share price in each of the three scenarios.

In the short to medium term, expecting that Tencent’s Price/Book multiple would remain below 5-7 might already be quite a conservative assumption given that it still is a highly profitable technology company in a very low interest rate environment. Although Tencent’s ROA and ROE ratios have declined in recent years as the company has gotten bigger, it is fair to model a scenario where the Price/Book returns back up to around 6x around the time of the Beijing Olympics in early 2022, which would raise the shares to around 660 by early-mid 2021, rather than by 2023-2025. One way of capturing this rebound would be with an option strategy like the one I described in this earlier article. As the below chart shows, Tencent’s Price/Book ratio had never fallen below 6.5x before May of this year. 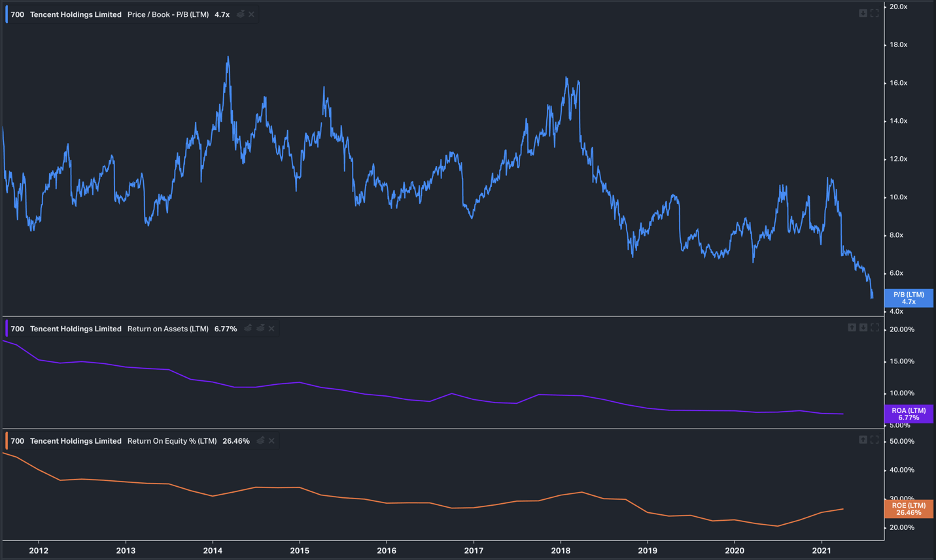 When modelling long-term return numbers, I find it very important to compare a company’s ROA and ROE numbers versus the rate it would pay on long-term debt. In today’s low rate environment, when 10-year inflation indexed bonds yield less than -1%, I believe some of the best companies to own are ones that can borrow at around 2-3%/year fixed for a 10-year term, and invest those proceeds in a business with an ROA of at least 6%/year. Above we see that Tencent does run a portfolio of high-returning businesses, and the below chart shows how Tencent’s cost of debt over an almost 10-year term, based on their 3.975% notes due April 2029, remains around 2.22%/year. 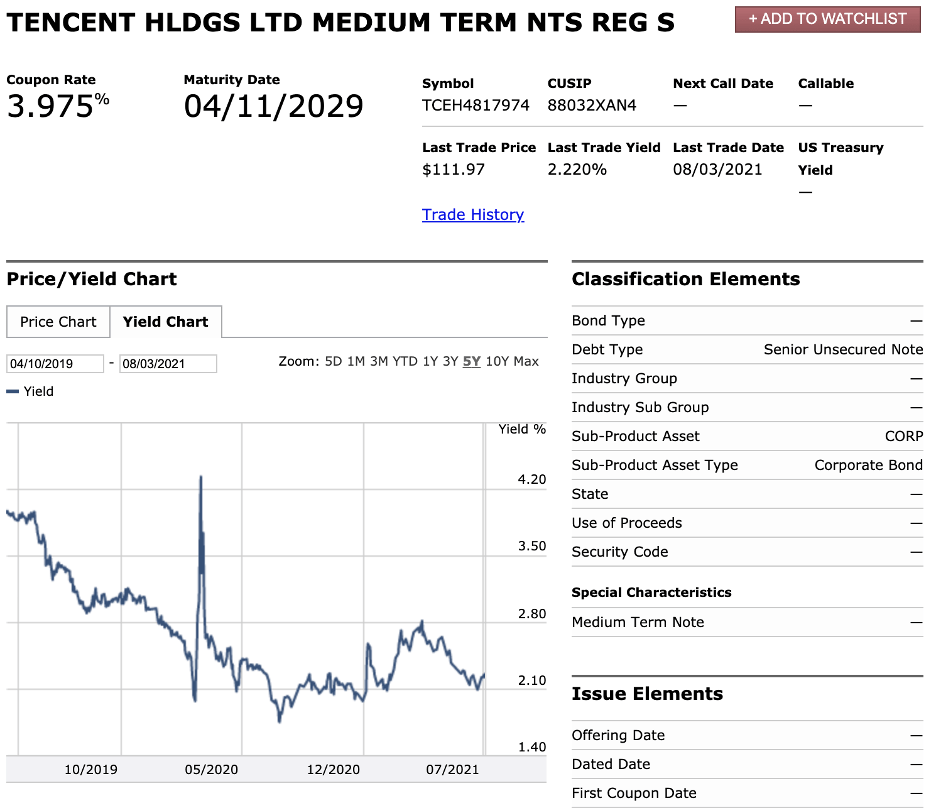 Looking more broadly at Tencent’s credit term structure, we see the notes due in 2024 currently yield around 0.9%, while the longer-dated 2049 notes last traded at a yield around 3.3% on July 26th.

This article was initially inspired by a focus on regulatory risks hitting Tencent and other large Chinese companies, so I’ll start the list of risk factors below with that, and list other major risk factors I believe should be considered in the order I would think through them. Note that pages 92-97 of Tencent’s 2020 Annual Report list nine risk factors, also starting with regulatory risk, but I’ll diverge from management’s list of risk factors after the first three and provide three of my own as risks 4-6:

Although I have been buying call spreads on Tencent with the view that shares are likely enough to rebound between now and the February 2022 Winter Olympics in Beijing, I still primarily see Tencent as a long-term investment in the future of China’s consumer Internet. My bull case target of Tencent grossing around RMB 2,500 per Chinese resident per year by around 2031 seems optimistic but reasonable if we see nominal GDP per capita doubling again over the next decade from around RMB 77,500 in 2021 to around RMB 150,000 in 2031, of which Tencent’s revenue would be around a 1.5%/year service fee. Overall, I see Tencent shares as a very attractive bargain relative to its proven financial quality, and believe the upside significantly outweighs the downside from these levels. To put a number on it, I’d increase my portfolio allocation in Tencent shares to as high as around 4%.

Why You Should Go Long On Lenovo