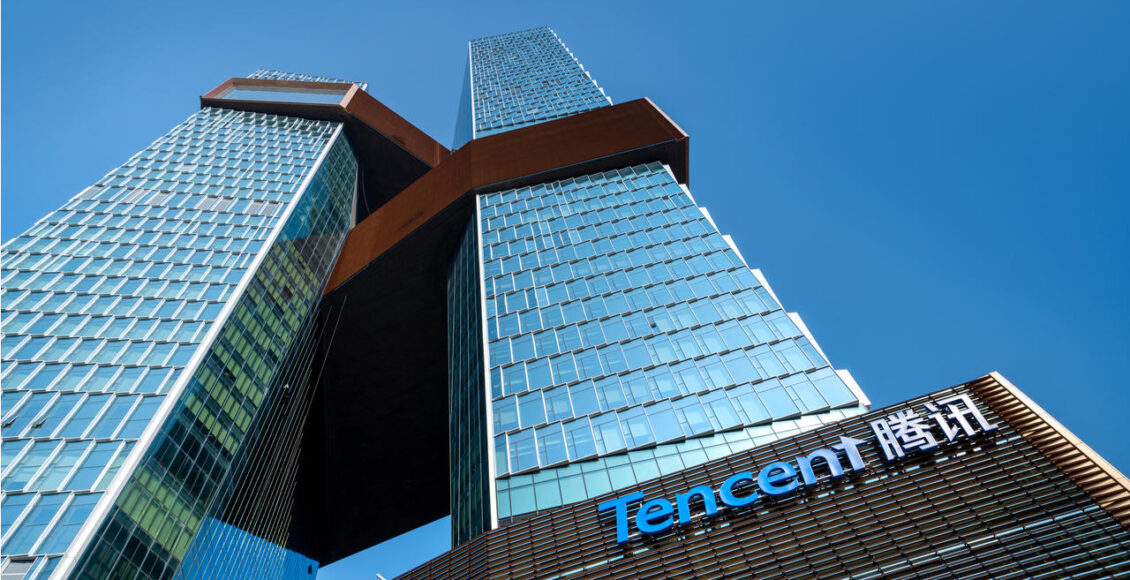 Tencent is one of the most diversified technology companies in the world. If it operated in the USA, it would probably claim a spot among the tech giants (FAAMG) based on both its size and the type of services it offers to its customers. The company also maintains a huge investment portfolio which has been very successful, in part because of Tencent’s ability to create a moat for its investments. While the company carries more geopolitical risk than its US-based counterparts, I’d argue that having no exposure to emerging markets is taking an even greater risk than investing in emerging market blue chips like Tencent.

Tencent’s growth rate is similar to that of the FAAMG stocks’, but it arguably has better revenue diversification than any FAAMG stock; Apple, Google, Facebook, and Amazon all have over 50% of their revenue coming from one segment. Microsoft is better diversified with three segments each accounting for about one third of revenue.

Tencent also has parallel businesses to many of the successful businesses of the western FAAMG stocks.

Like Microsoft, Tencent is very involved in gaming. The online games segment consists of some China-specific titles but also many well known international titles like PUBG Mobile (#9 strategy game on the USA App Store). Their ownership of Supercell and Riot Games also gives them exposure to Clash Royale (#1 strategy), Clash of Clans (#5 strategy), and League of Legends (#28 strategy). Tencent has also partnered with Nintendo to distribute Nintendo’s console and games within China. International gaming revenue now represents 25% of Tencent’s online games revenue and it’s growing faster than domestic games revenue.

Like Facebook with Instagram and WhatsApp, Tencent also owns multiple social media platforms: WeChat and QQ. There are many reasons to own multiple platforms, with a major one being that each network caters to different demographics and tastes. For example:

Aside from deriving less revenue from advertising, an important difference between Tencent’s platforms and western social media like Facebook is that Tencent basically created an operating system within its social network apps.

Like Apple, Google, and Microsoft enable within their operating systems, third party developers can create “mini programs” that are basically apps within WeChat. Some mini programs include McDonald’s, Little Red Book (another popular social media app in China), Bilibili (basically Chinese YouTube), and many more. There are also apps made by “influencers” that are used for highly specialized purposes, such as to sell promoted goods. Basically, anything you’d expect to find on Apple’s App Store, Chinese users would expect to find in WeChat.

Like Netflix, Tencent offers a long form video service. They have 123 million video subscribers thanks to the popularity of their intellectual property, in particular anime and drama series. However, their video service is more flexible than Netflix since they also offer ad-supported content, social/co-watching experiences, and bonus purchase options (e.g. pay extra to watch a new episode of a show a couple days early).

Tencent is also a leader in music streaming, and has a Spotify style app called QQ Music. Like with their video service, they monetize this in creative ways; they have some free songs, some subscription songs, and some songs that can be bought separately.

All told, Tencent is a highly diversified company that provides many FAAMG-like services to Chinese and global users. In some ways, Tencent actually looks ahead of its western counterparts, in particular by utilizing its social media platform for payments and many other services, and by finding more ways to monetize its intellectual property than just a subscription service. 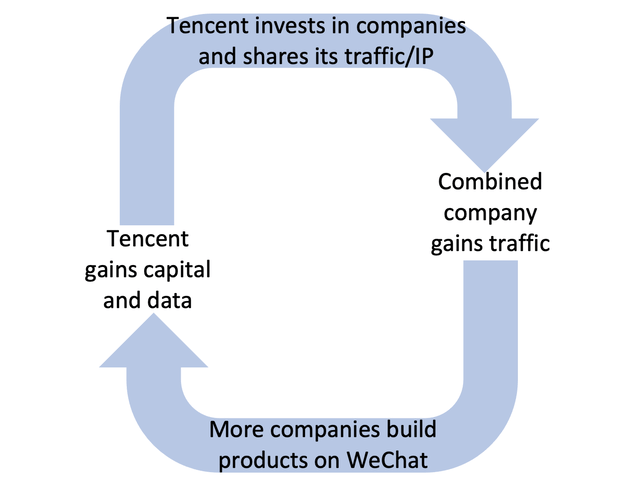 We manage our investment portfolio with a primary objective to strengthen our leading position in core businesses and complement our “Connection” strategy in various industries, particularly in social and digital content, O2O and smart retail sectors. We also invest in transportation, FinTech, cloud and other sectors. -Tencent

A nice visualization of the portfolio’s holdings can be found here. I also found this (slightly outdated) spreadsheet that sorts the top holdings. The portfolio is well diversified with Snapchat being their largest holding. It’s worth 6% of the portfolio and is the only holding worth more than 5%.

The portfolio contains a lot of other international companies such as Tesla, Spotify, and some private companies like Discord and Tile. International investments represent slightly less than half of the portfolio, and that percentage is increasing.

Many investors are reluctant to buy a company for its investment portfolio because they prefer to pick stocks themselves. In my view, there are four major benefits that Tencent’s portfolio offers over individual stock picking:

To further illustrate the final point, here are a few examples:

Tencent’s clever use of its social media platform and intellectual property allows it to share its moat with some of its investments, which dramatically boosts the chance that they will succeed. It’s also very likely that Tencent uses data about which WeChat and cloud apps are gaining popularity to choose which companies to invest in, a huge advantage over most other retail – or institutional – investors. 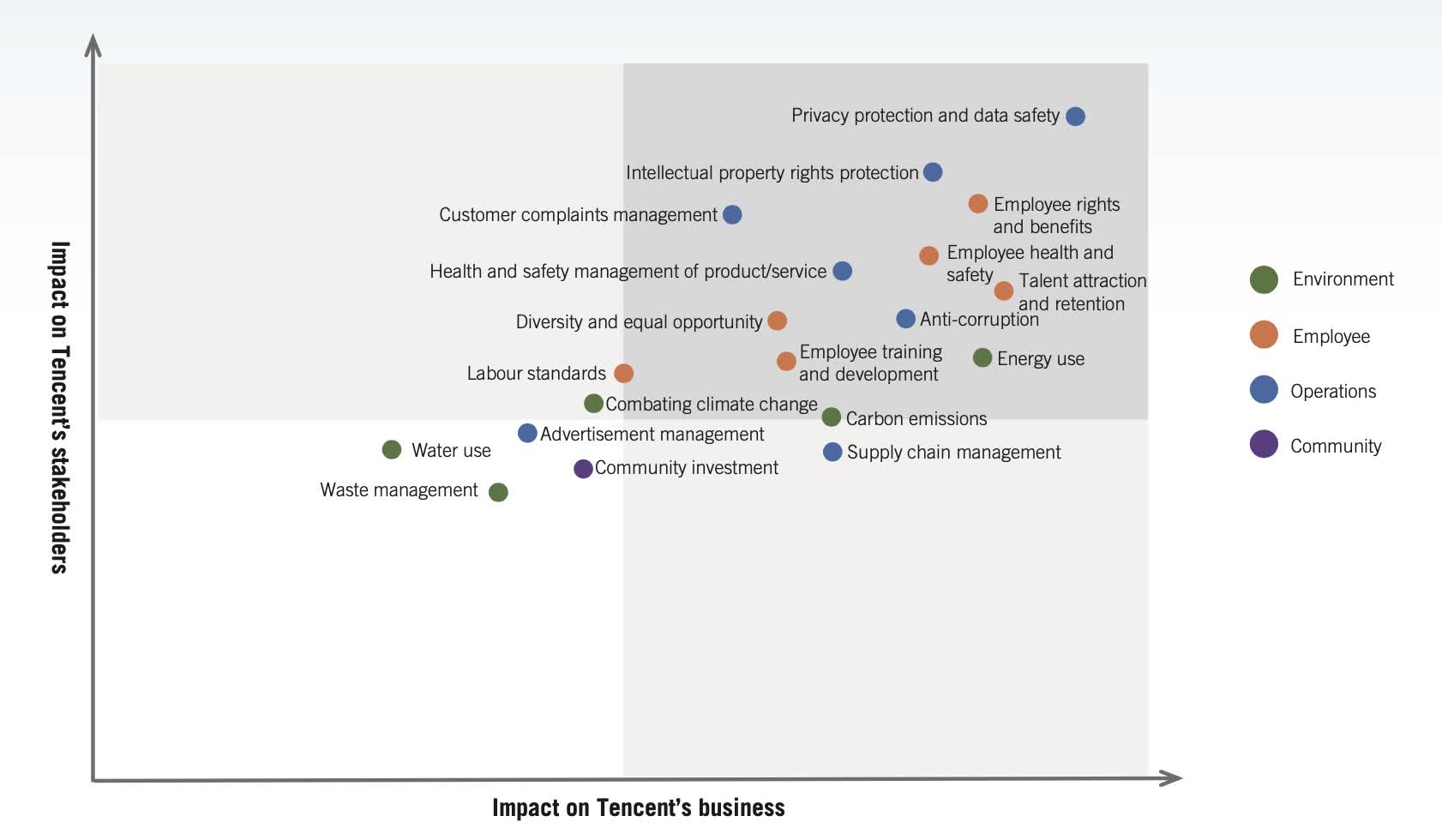 If Tencent operated in the USA, it would pretty much be a no brainer buy, especially at its current price. The company’s revenue is arguably more diversified but as fast growing as the tech giants in the USA, and its investment portfolio is one of the largest in the world.

However, Tencent has identified nine main risk factors that are worth considering. All of them are factors that I’d expect to see from a USA company as well: regulatory risk, competition risk, cybersecurity risk, infrastructure/stability risk, public relations risk, and fraud risk.

Reading between the lines, some of these risks are more concerning because of Tencent’s geopolitical situation. Many of these issues also exist with Alibaba and thus have been beaten to death in virtually every trending article on this site. I recommend reading some of those articles for more details (including my article about China e-commerce), but here’s a quick overview for posterity: 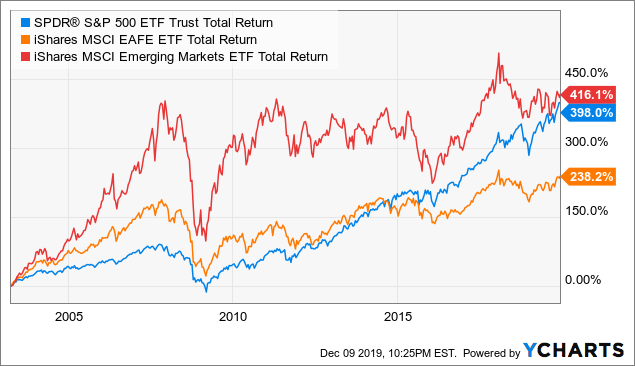 Although history rarely repeats itself so cleanly, when looking at valuations and projected growth rates it’s not hard to imagine a scenario where emerging markets being to outperform again. Tencent is the largest emerging markets company and currently has a P/E of 21, about half of Microsoft’s 37. Microsoft’s P/E is near an all time high (it was less than 15 in 2011/2012) along with the rest of the USA market while Tencent’s is near an all time low (it traded between 30 and 40 for most of the 2010s). Meanwhile, China’s GDP is growing at over 6% per year while the USA grows at just over 2%.

I don’t pretend to know what will happen going forward. Maybe China’s stocks will permanently trade at a lower P/E because of the risk associated with them, and maybe there’s further to fall before a stable P/E is reached. But it’s also possible that the selloff is overdone, that worst-case scenarios won’t manifest and that EEM will outperform SPY in the coming decade.

Given enough time, revenue growth will prove more important to stock returns than multiple expansion, and companies in both the east and west appear well positioned to further grow revenue. For this reason, I want diversified exposure to compelling growth opportunities in both markets.

Looking at a historical chart of SPY or EEM, every dip seems like a great buying opportunity. But at the time of the dip, there was always a reason why there could be further to fall, and very few people timed the bottom of the dip perfectly. I have no reason to believe that this time is different.

So there could certainly be further to fall for Tencent too, which is why it’s important to dollar cost average and maintain a diversified portfolio. But I expect that over the long run, Tencent will recover to new highs.

Editor’s Note: This article discusses one or more securities that do not trade on a major U.S. exchange. Please be aware of the risks associated with these stocks.

China’s Tencent, miHoYo remain on top of their industry with world’s most lucrative…

Where to Invest in China’s Common Prosperity Age