The Hang Seng Tech Index fell as much as 3% in Friday early trading, with video streaming firm Bilibili Inc. among the worst performers. Meituan was also a drag on the gauge, following news that Sequoia Capital reduced stakes. 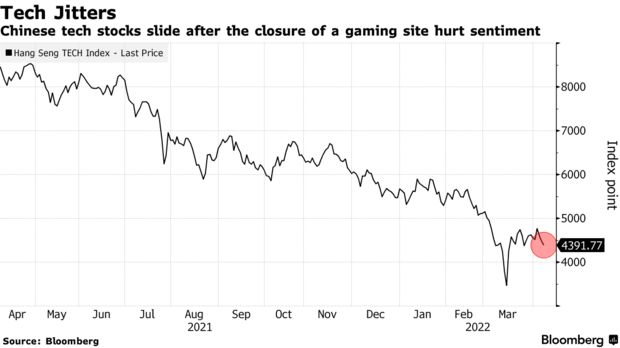 Tencent’s decision comes more than a year after Beijing blocked a merger between its investees, an entity which the soon-to-be closed platform Penguin Esports was expected to be folded into. China tech stocks have come off a record low in mid-March, but yet to stage a sustainable rally amid regulatory risks.

Tech shares have been hit especially hard recently, following Beijing’s crackdown on the live-streaming sector’s tax evasion and a series of hawkish comments from the Federal Reserve.

Chinese authorities have repeatedly vowed to add policy stimulus and stabilize markets, but that’s done little to soothe investors worried of a spillover from higher U.S. interest rates, among other risks.

On Friday, China’s regulator said it will start a campaign until early December to curb violations in internet companies’ algorithm.

The Hang Seng Index also headed for a third day of declines, shedding as much as 1.1% on Friday. China’s benchmark CSI 300 Index also fell.

Jack Ma Did What He Was Told. Why Is He Getting Scrutinized…