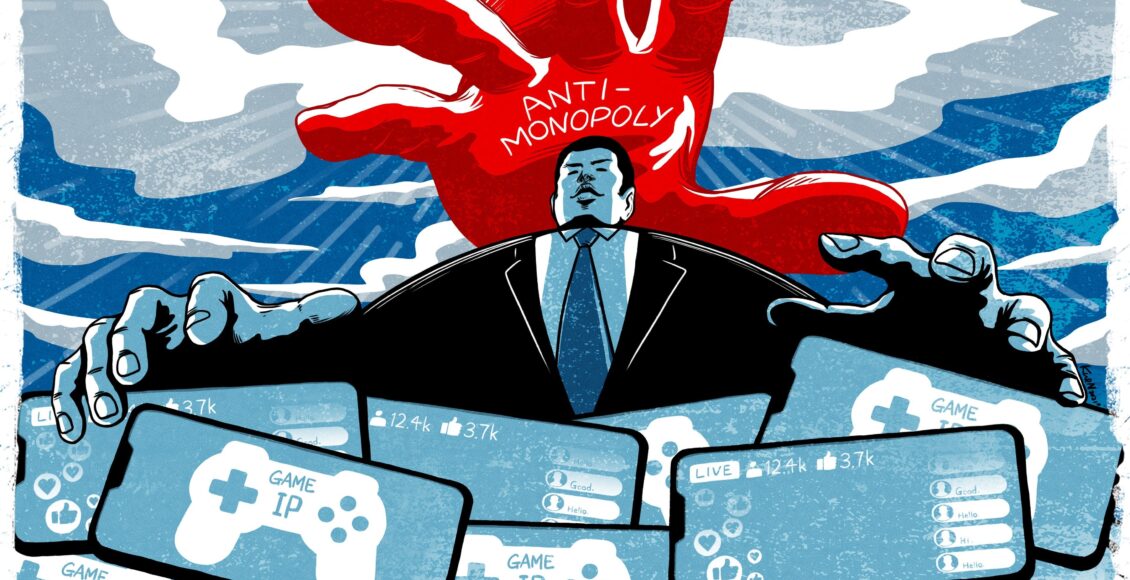 In the second of a four-part series on China’s antitrust investigations into the nation’s internet and technology sectors, Josh Ye looks at the latest development in the world’s largest video gaming market. Part three covering literature and part four on ride-hailing will be published on June 12 and June 26.

The merger, which was expected to wrap up early this year, hit a snag amid China’s ongoing antitrust crackdown led by the State Administration for Market Regulation (SAMR), which is reviewing the deal. At issue is the concentration in market power that merger would give to Tencent Holdings, which runs the world’s largest video gaming business by revenue and China’s biggest social media platform WeChat.

Shenzhen-based Tencent – which had a 43 per cent share of China’s video gaming market in 2020, according to market research firm Niko Partners – owns a 37 per cent stake in Huya and 38 per cent of DouYu. It would own about 67 per cent of the merged enterprise, while adding more users to its ecosystem in the world’s largest video games market.

“The merger will greatly diminish competition in the video game live-streaming market in terms of creating a horizontal monopoly,” said You Yunting, a senior partner at Shanghai DeBund Law Offices, who is not involved in the transaction. “From the view of a vertical monopoly, the merger will unfairly give Tencent the advantage from operating online games to live-streaming them.”

China’s antitrust crackdown, which began in earnest last November with inquiries into the business practices of the world’s largest financial technology enterprise, is widely speculated to be shifting its focus to online music and video gaming, sectors in which Tencent has significant market share.

SAMR slapped Alibaba Group Holding, owner of the South China Morning Post, with a record fine of 18.2 billion yuan (US$2.8 billion) in April for breach of the country’s anti-monopoly law. It has since pursued investigations into Chinese on-demand delivery services giant Meituan and online housing broker KE Holdings.

To be sure, no one is suggesting that the Huya-DouYu merger could be called off. Still, that has put the transaction – the largest of its kind in China’s video gaming industry – on low gear.
“The timing for this deal to be closed depends on the approval process by the relevant Chinese regulators,” said DouYu founder and chief executive Chen Shaojie during the Nasdaq-listed company’s earnings call on May 18. He maintained that the merger “is on track”.

While antitrust authorities are concerned about the merger giving Tencent an overwhelming lead in China’s video gaming market, they are willing to settle for approval subject to conditions, according to a Reuters report in March, citing people with knowledge of the matter.

With the video gaming market generally driven by a succession of hit new titles, the industry encourages increased competition between a growing number of developers to quickly bring the next blockbuster to market. But some analysts see the game live-streaming market as a field where anticompetitive practices could emerge.

Tencent’s outsize position in the industry raises questions on how much more it would gain from the Huya-DouYu merger. The Hong Kong-listed company already owns stakes in US-based developers Riot Games, Epic Games and Activision Blizzard, as well as South Korean firm Krafton and Japanese company Marvelous. It spent US$8.6 billion to take over Finnish mobile game developer Supercell in 2016.

Tencent continues to grow organically as well as through mergers and acquisitions. The company has already closed more than 50 video game-related deals as of May this year, according to a Niko Partners report. It said Tencent, on average, “closed one deal every 2.5 days in 2021”.

In its quest for global gaming domination, Tencent continues to invest in a “silent” manner, according to the report. That means its portfolio companies are not rebranded, allowing these firms to continue operating in the ways “that made them attractive to Tencent in the first place”.

That has helped fuel opposition to the Huya-DouYu merger.
“When Tencent extends its market-dominant status to the video game live-streaming area, it runs the risk of violating antitrust laws,” said You of Shanghai DeBund Law Offices.

The merger would give Tencent a firm grip on the development, publication and online distribution of a vast number of video games from various operating units, as well as live-streaming games in the industry’s biggest market.

Tencent did not immediately respond to a request for comment.

Chinese regulators now find themselves playing catch-up to old deals that enabled Tencent to gain dominance in a specific sector, according to Angela Zhang, associate professor of law at the University of Hong Kong.

“I can understand why [China’s] antitrust authority has an interest in vetting [the Huya-DouYu] deal and wants to impose some remedies, as the authority should have intervened [earlier] when Tencent acquired stakes in these companies,” Zhang said.

Amid speculation that the firm would be regulators’ next Big Tech target, Tencent founder and chief executive Pony Ma Huateng emphasised the social good his company is achieving, according to an interview published last month by Southern Weekly. The report was published after Tencent pledged to spend 50 billion yuan on curing societal problems and improving China’s rural economy.

“Over the past 23 years, Tencent has managed to come this far because society and our country have provided support that allowed Tencent to continuously grow,” Ma told the Guangzhou-based newspaper.

Days after that interview’s publication, SAMR imposed a fine of 500,000 yuan each on Tencent, Didi Chuxing and eight other major internet companies for breaching China’s anti-monopoly law, according to a statement from the regulator. The firms failed to report the acquisition of smaller competitors and the creation of new joint ventures. Those deals, however, were not found to have the effect of excluding or restricting competition.

Based on antitrust guidelines updated in 2018, companies must seek approval for mergers and acquisitions involving firms with annual revenue of more than 10 billion yuan globally, or 2 billion yuan in China.

Earlier this month, ByteDance said it will appeal that decision, asserting that Douyin Huoshan does not infringe any intellectual property rights and that users own the copyright of the content they create.

Enforcement of intellectual property rights to restrict competition in the video games industry may be a delicate area for authorities to resolve antitrust cases, according to Charles Yu, an associate at international law firm Pillar Legal.

“Gaming is more IP-focused,” Yu said. “Note that intellectual property right is a proprietary right, namely the owner of IP can decide whatever they want to use its own IP. So the boundary between monopoly and exercising the IP owner‘s right is vague.”

“As a result, regulators might be very cautious in pursuing a monopoly investigation in the video games industry,” Yu said.

If precedents are anything to go by, a landmark case won by NetEase a few years ago bodes well for Tencent’s chances at fighting video gaming-related antitrust charges.

In December 2019, the High People’s Court of Guangdong Province decided in favour of NetEase, China’s second-largest video games company, against an appeal filed by social media and entertainment platform operator YY – now known as Joyy, a Nasdaq-listed company – to overturn its ruling in 2017.

The court found YY guilty of infringing NetEase’s copyright of the online game Fantasy Westward Journey II and ordered it to pay 20 million yuan as compensation. YY, which also operated Huya, broadcast the game on the two platforms without authorisation, according to NetEase, which filed the original lawsuit in 2014. The case has some similarities with the ongoing dispute between Tencent and ByteDance.

The court also ruled that NetEase does not qualify as having a dominant market status, so it is not subject to anti-monopoly laws.

While the spectre of a major antitrust investigation looms, Tencent remains focused on new industry developments. James Mitchell, Tencent’s chief strategy officer, said in a conference call with analysts on May 20 that the company is looking to continue investing in marketing, publishing, as well as experimental games and “frontier technologies” like cloud gaming.

Some analysts indicated that regulators could be overreaching if they start an antitrust crusade in the video gaming industry.

“The online game industry has different characteristics from e-commerce and food delivery, where dominance in users, merchants and logistics can easily translate into unfair scale advantages,” said Vey-Sern Ling, a senior analyst at Bloomberg Intelligence. “Games, similar to movies and other forms of entertainment, tend to be content driven, which is why we often see great successes from small, independent studios.”

“It is hard to predict what SAMR would do, but I think if they would like to rein in Tencent‘s dominance, it is more likely that they will tackle the company’s huge social mobile ecosystem than its gaming business,” said Ling of Bloomberg Intelligence.

Despite all the market speculation, an antitrust action against Tencent may not be on the cards.

“In 2021, it seems unlikely SAMR will conduct an antitrust investigation into the gaming industry, following its action against Alibaba and Meituan,” Yu said, “Platforms like Taobao and Meituan affect many aspects of people’s daily life, relating to eating, travelling and daily shopping.”

“And from that perspective, the game industry seems much less important,” he said.