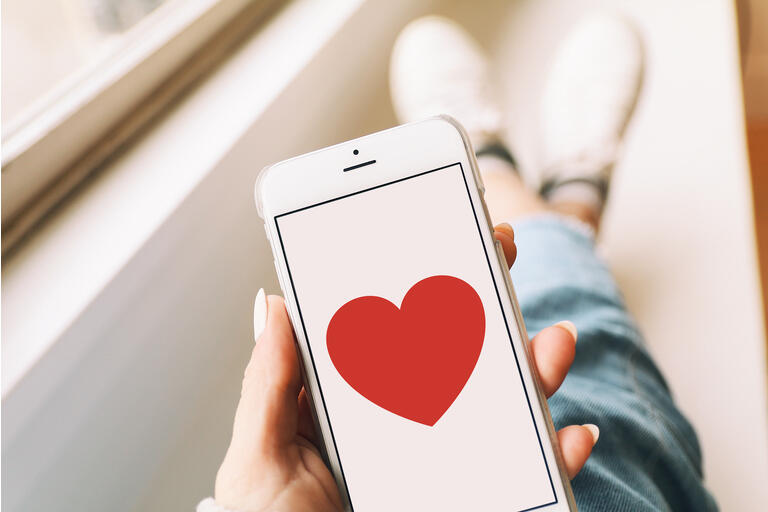 The Hello Group is expected to announce its fiscal third quarter earnings at the end of this month. Top-line sales are expected to come in at $570 million approximately and the earnings per share estimate is expected to come at $0.31. Although the bottom-line projection is expected to come in approximately 32% below the same period of 12 months prior, we are beginning to see green shoots with respect to top-line sales growth. In fact, if the $570 million number can be achieved in the third quarter, the Hello Group will have three consecutive quarters of top-line growth under its belt. This bodes well for what is coming down the track in MOMO.

We state this because Tantan is really where the potential in this company resides at present. Management actually stated on the first quarter earnings call that it expected Tantan’s user base to increase from a 20% standing start to 35% by year-end. Trends still point to the fact that this is achievable. Suffice it to say, this is the area where investors should be focusing most of their attention as this is where real near-term potential lies. Furthermore, as Tantan begins to scale, earnings in the initial periods will most likely be lumpy as management fully intends to keep putting the user experience of the platform ahead of respective monetization efforts.

This is actually a great foundation to drive the company forward from because management has a clear vision of how lucrative the monetization of Tantan could be going forward. In fact, given the fact that management believes that it will be able to extract more revenue per user from Tantan over Momo in the long run, this belief will keep the company’s focus firmly on improving the product and grow those users which are essentially long-term assets for the platform.

We wrote about The Hello Group back in September of this year when we went through some of the company’s profitability metrics such as ROE, ROA & ROIC which were all very elevated for a company which was undergoing negative sales growth. What is driving the above metrics however is the amount of cash flow the company continues to generate. The Hello Group generated almost $320 million of operating cash-flow over the past four quarters which means the trailing cash-flow multiple comes in under 9.

A low multiple such as this plus a cash war-chest of almost $1.5 billion explains why management’s focus with respect to Tantan can remain firmly on building numbers. Aggressive monetization at this point comes in a very distant second. In fact, with shares trading for under two times their cash-position, management will not hesitate in seizing the right opportunity if indeed it presents itself. We have already witnessed how various digital companies or platforms have been able to grow their user-bases at breakneck speeds because they got their timing right. This is why it is important to have thriving cash-flow as well as a cash war-chest if indeed management sees an opportunity where significant value can be potentially added.

We remain long MOMO and actually debated selling calls against our position on the recent up-move. We refrained from doing so though because shares look very close to finally breaking out of their bearish trend. As we can see from the weekly chart below, if shares can punch aggressively through the $14 mark, this should lead to a powerful trending move. At present, shares are trying to break out above both the downcycle multi-year trendline as well as the 50-week moving average of approximately $13.88. 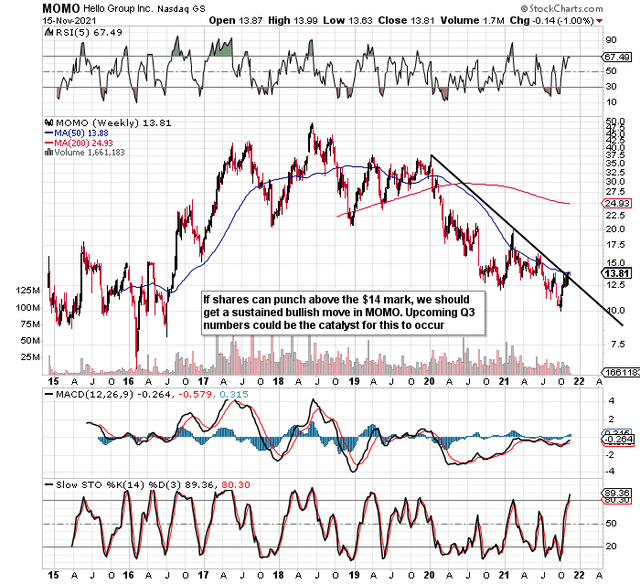 The monthly chart though is where we see the real potential is in MOMO at present. The MACD indicator is heavily oversold and looks primed to cross over (which would be a strong buying signal in our eyes). Remember, being chartists, we believe that every piece of information concerning MOMO and the customers and markets it serves has already been digested by the share price. Regarding Tantan, management is focused on improving marketing efficiency, delivering a more engaged dating experience & branching out the platform into international markets. If these are done successfully, there is no doubt that user growth will be strong. The question then becomes whether the market is pricing in this growth already.

Therefore, to sum up, we remain long MOMO as green shoots are finally beginning to show in the financials. Tantan must now take the lead with respect to growth as the company has plenty of firepower to keep on investing behind this platform as well as other applications. We look forward to continued coverage.

Kissinger Doesn’t See China Invasion of Taiwan in Next…