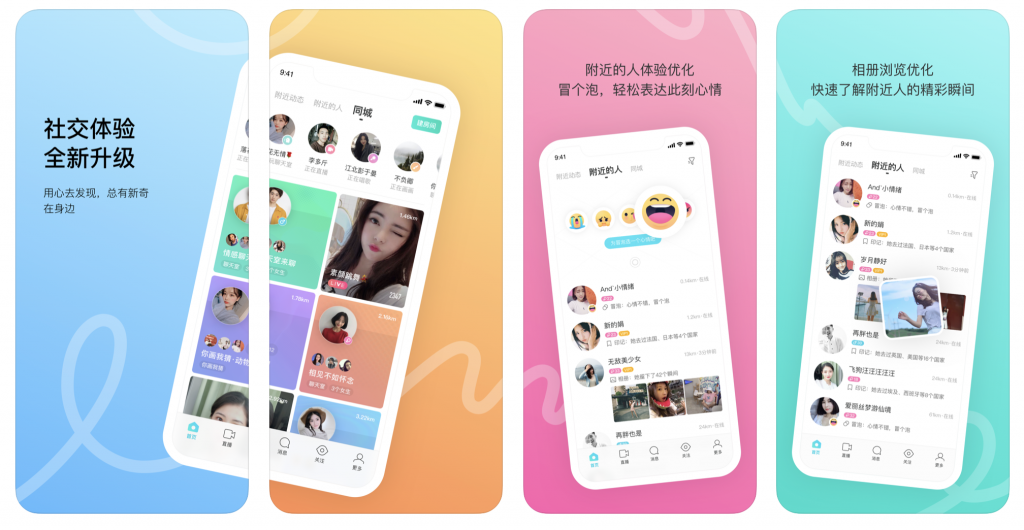 In January of 2020, Momo stock (MOMO), now known as Hello Group, was trading at $36 per share. For reasons mainly relating to the fear of the Chinese government, MOMO now trades at just $12.94 per share at the time of writing. We believe that the dating app market has a lot of potential, and the product Hello Group is offering is valuable. A market cap of just $2.53 billion creates large upside potential with minimal downside and warrants a rating of strong buy.

I am not going to discuss the relationship between the US and China, and how it relates to Chinese companies listed in the US. That situation is wildly complex and there is plenty of coverage and opinions out there, both within seeking alpha and major news outlets.

With that said, we do not think the large Chinese companies, including Alibaba (BABA), Bilibili (BILI), Baidu (BIDU), NIO (NIO), and MOMO will be significantly impacted long term. It appears that a lot of big money agrees with us, evidenced by Charlie Munger’s multi-billion dollar position in BABA.

We do, however, understand that US-China relations may delay the return to fair value. To counter this specific risk, invest with a long time horizon. MOMO will likely grow in the meantime, making the eventual run even larger.

In this article, we will discuss MOMO as if it were a United States company.

MOMO operates in two key segments, their core business, and Tantan. Their core business, the Momo app, is a popular social media platform in China that operates as an instant messaging platform, connecting nearby people with similar interests through their algorithm. As you may expect by the description, Momo was mostly used as a dating app. In 2018, MOMO acquired Tantan, their only major competitor, for $800 million. This strategic acquisition allows for leverage of the MOMO algorithm to improve the quality of Tantan matches, as well as reduce competition. 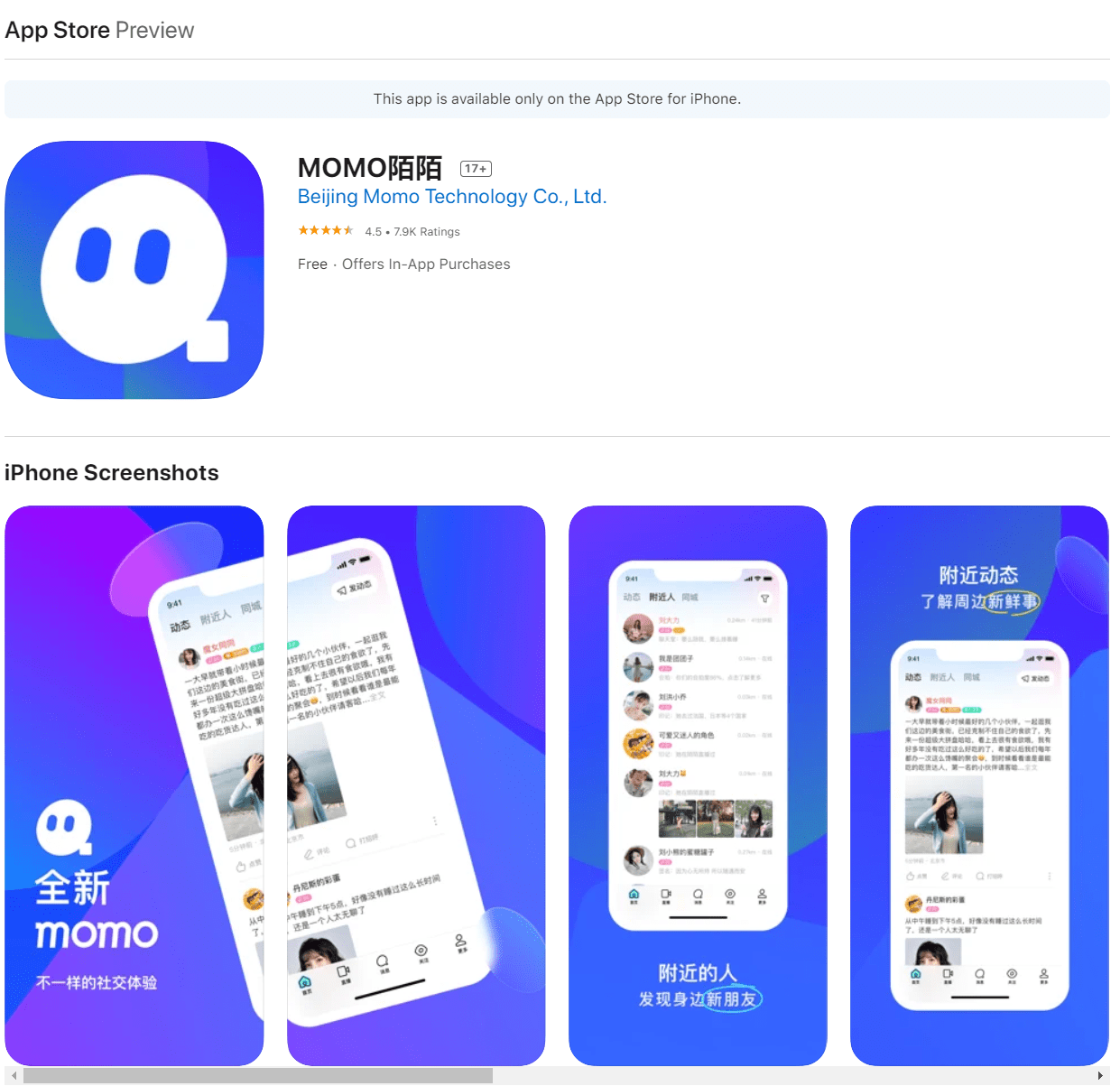 The core business is a social media platform that places emphasis on relationships between users.

Below we have the app summary pulled directly from the page and put into Google Translate. The translation may not be perfect, but it reads pretty well.

-MOMO short video: share your own life moments, use video to get to know me.

-Nearby people/Activities: Browse nearby activities and discover interesting people around you.

-Nearby groups: Look at nearby groups and find people with similar interests.

Momo is generally regarded as a “flirting app,” where you can meet nearby people with similar interests.

However, recently they have redirected users seeking a romantic connection to Tantan and branched into more of a social, partying app to allow users to share experiences and content with those around them.

We see this acquisition as bullish, as they both eliminated their competition and are able to improve the product for the current users and grow the user base. 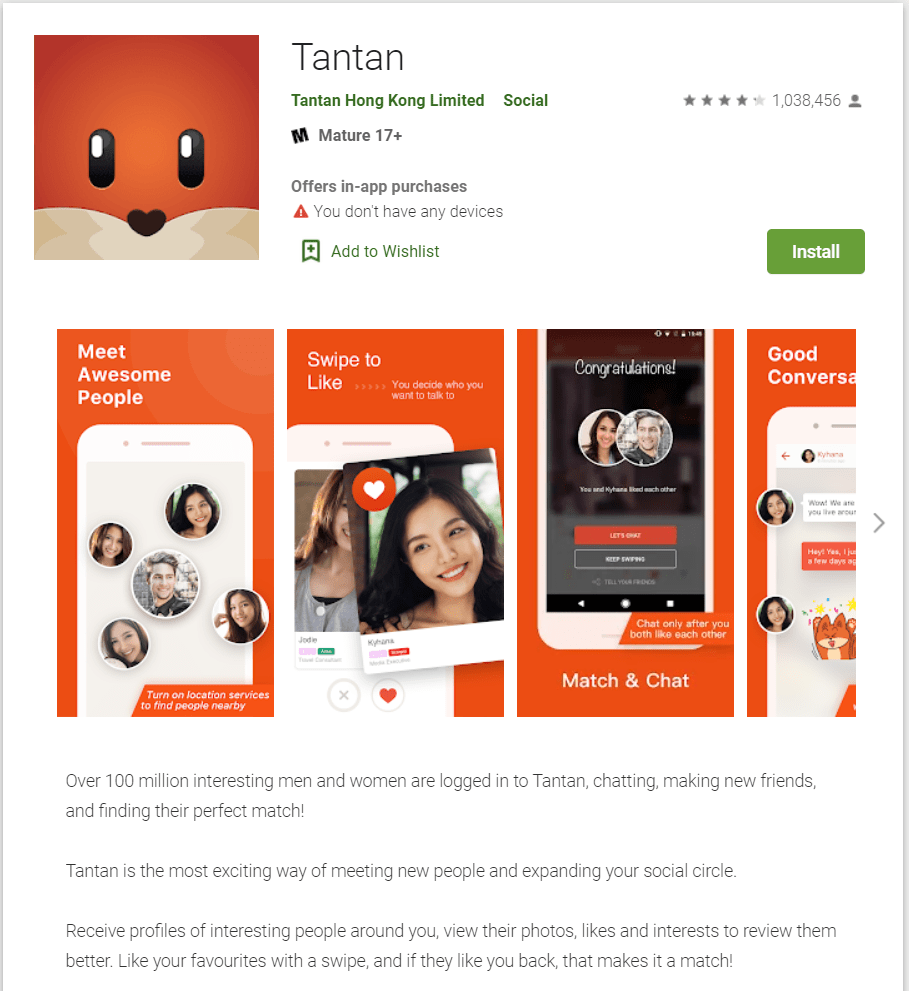 Tantan is the largest dating app in China. They provide an algorithm-based swiping system that shows users other profiles based on a complex algorithm, and not just proximity. 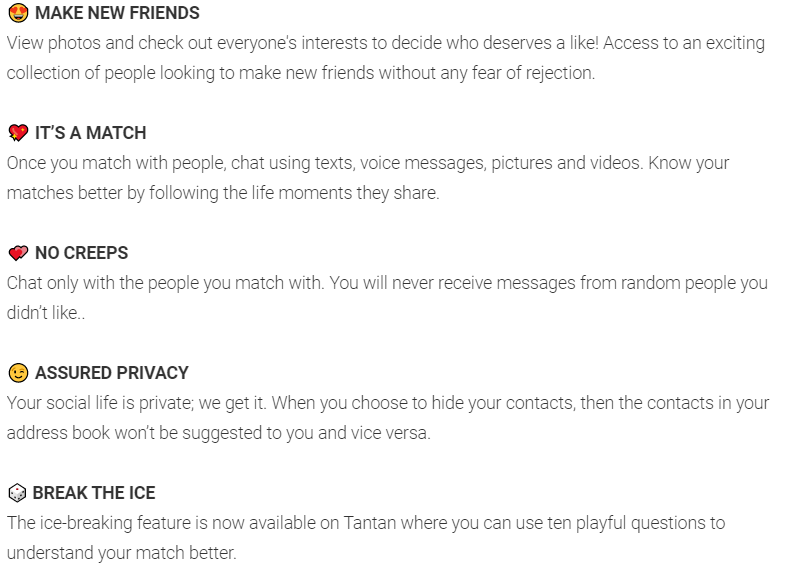 Tantan also offers features such as “Break the ice,” where people can start a conversation through a preset question instead of the stress of coming up with an opener or clever pickup line.

They also allow users to block people from their contacts, preventing the embarrassing situation that arises when someone you know finds their profile. We think that this feature will greatly reduce the hesitation among people, especially women, to download the app.

Tantan is currently undergoing a period of intense management shakeup post-acquisition, as the Hello Group felt that the current team was not best for the app. They have shifted focus away from the sheer DAU and paying user numbers towards creating a more balanced app with a better core dating experience. The early results of this shift are promising, but we will cover that later.

In their earnings call, they described their figures in Yuan, but in the article, we will use USD. According to Morningstar, the conversion rate is 1 yuan equals $.15 in USD, and all USD figures will be derived using that rate.

Revenue for the quarter was $570 million, down 5% YoY. Operating income was $120.83 million and $127.23 million excluding Tantan’s loss. Tantan posted $79.42 million in revenue with an operating loss of $6.88 million. The loss of $6.88 million is down from last year’s loss of $10.94 million, despite a 1% decrease in revenue YoY. The reduction in loss is primarily due to increased margins and reduced overhead relating to the layoff of a large portion of Tantan founders. The value-added services segment, where users can pay for a premium version of both MOMO and Tantan, was up 38% YoY. R&D expenses were $35.99 million, most of which was dedicated to improving their algorithm leading to a higher quality experience. Their current cash balance was $1.92 billion, after paying $131.8 million in dividends and $104.79 million to Tantan founders to exercise their stock options.

They forecasted revenue for both Momo and Tantan of $580 million, as well as a positive YoY growth figure for the second half of 2021. Tantan is not expected to turn an operating profit in the second half, as they are primarily focused on improving the user experience and not driving bottom-line growth. 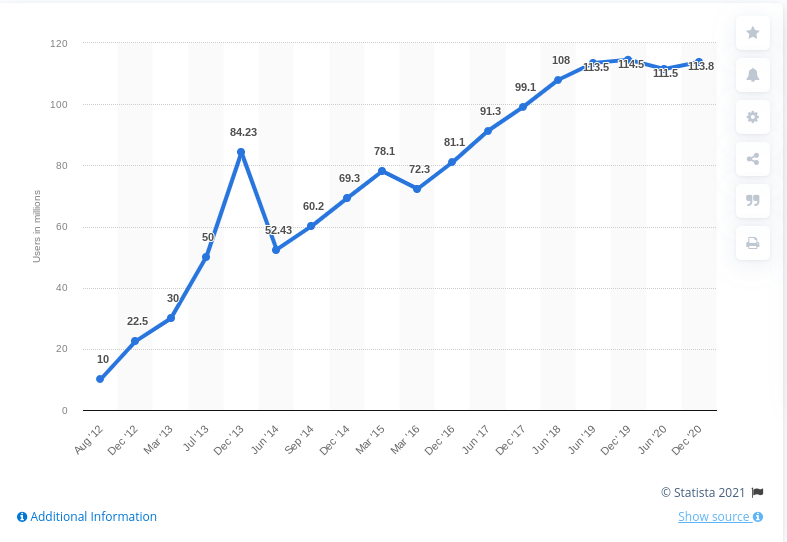 Monthly users for Momo were 115.6 million, up 4% YoY. Daily impression also reached a record high. Momo had 9.3 million paying users, an increase from the 8.9 million that they had a year ago.

We see this as a strong indication that new features are succeeding in keeping people on Momo despite the de-emphasis on romantic connections. The strong increase in paying users also supports this hypothesis.

For Tantan, daily active users were down slightly YoY as a result of new management choosing to focus on the quality of new accounts rather than the sheer number. They did not reveal the exact number of Tantan DAUs in either quarter. The paying users of Tantan were down from 3.5 million last quarter to 3.1 million, primarily due to weaker DAUs.

We would like to see these figures improve throughout 2022, and for the reasons listed below, we do think that users will grow.

Tantan is better than tinder

We believe that Tantan will eventually catch on in China as tinder did in the US. Our belief is founded on the principle that Tantan has several useful features that Tinder does not have. For one, their complex algorithm is showing promising early results in prolonged and high-quality user interaction. The new management drew focus away from the number of users and more on an equal male to female ratio. The early results of their strategy show nothing but promise. According to their recent earnings call, the percentage of new users that are female was 20% in December, and 45% in Q2. To put this in perspective, Tinder has a 24% female population.

Given that the quality of a user experience on a dating app is almost entirely dependent on the number of matches and the quality of said matches, we feel that the nearly equal male to female ratio and complex matching algorithm give Tantan an objectively better product than Tinder.

We expect Tantan to explode in the coming years, especially once this new management gets everything under control. China has approximately 200 million single adults, and a culture that puts emphasis on marriage, creating a perfect opportunity for growth.

We think that a DCF valuation is the most appropriate in this instance, but some ratios are worth noting. These figures are so good by traditional metrics that we feel the need to include a screenshot of their FinViz profile. 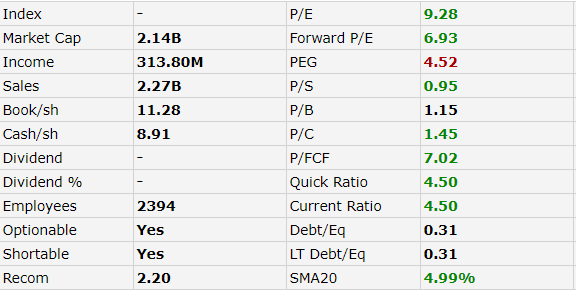 For a loose reference, here is the profile of Match (MTCH), the parent company of tinder. 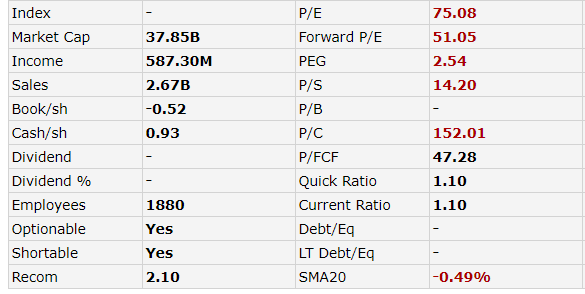 Momo has better financials by nearly every single metric listed, and MTCH is still considered to be undervalued currently.

Instead of getting a reasonable price target, we will use the DCF model to prove that MOMO is absurdly undervalued.

We will use the highest recommended discount rate of 12%

Remember all figures are Yuan converted to USD. 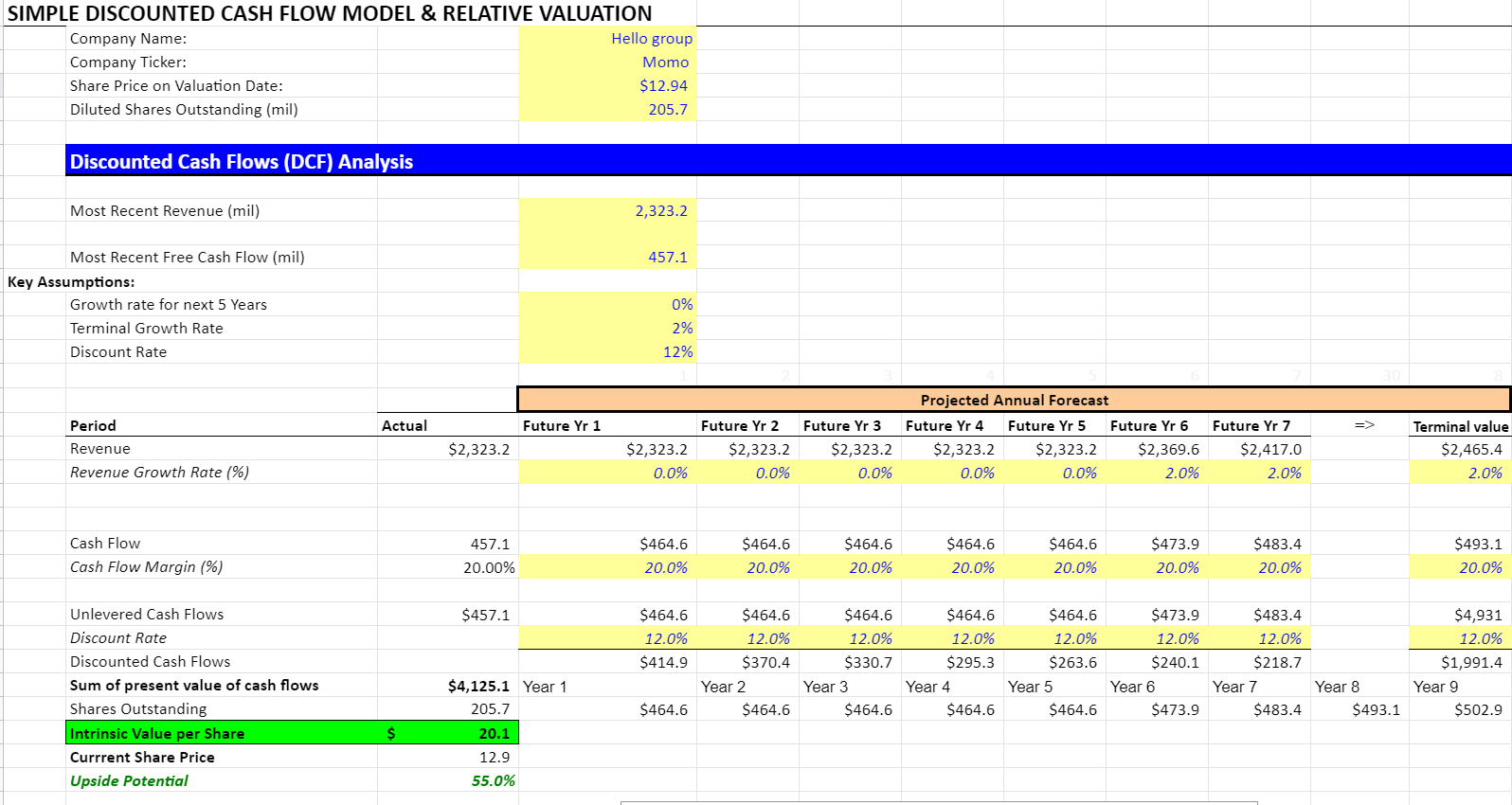 We set our initial price target at $24.5, using the same model from above with a 5% growth rate. Our price target represents an upside of 90%. We feel comfortable setting our price target that high above the current share price as Momo traded there as recently as March of 2020, and the business has gotten considerably better since that date.

During their earnings call, they revealed that one of the biggest challenges facing their app in terms of dating experience was that women tend to swipe extremely selectively or not at all. As a result, a considerable portion of female users get little or no matches.

We think that this issue will eventually resolve itself as female users realize that swiping is not an act of commitment but more an act of interest. As the app continues to grow, more women will understand how to use the app in the correct fashion.

It is also likely that women will be more willing to swipe right as their matches improve in quality. The introduction of more personal information in profiles will lead to better quality matches that women will likely be more open towards.

A large portion of “fake” profiles

30% of new Tantan users are flagged as “fake.” In this context, fake is defined as a user that failed to upload a good photo or provide sufficient information, resulting in reduced user display and little to no matches. The retention of fake accounts is extremely low.

We do not see this as a significant issue as low-quality accounts are a problem in a lot of dating sites. This is part of the industry and the fact that high-quality users are only being shown other high-quality profiles acts as a positive.

We see MOMO as a strong buy with a limited downside. The main risk, as discussed early in the article, is the Chinese government. If you have done your research and are comfortable with taking that risk, then MOMO is a buy with massive upside. The dividend, growth potential, strategic acquisitions, competent management, and TAM provide more than enough reason to buy the stock.