Chinese human resources and job search provider 51job.com has agreed to be taken private in a deal that valued it at about US$5.7 billion, making it the latest US-listed Chinese firm to dump the public markets in favour of private ownership.

The transaction followed a nine-month engagement with Beijing private-equity firm DCP Capital, which was first revealed in September. The company, which went public in the US in 2004, formed a special committee of independent directors to consider the proposal and other strategic alternatives at the time.

In May, 51job.com said it received an updated takeover proposal from a consortium that included DCP and buyout firm Ocean Link Partners, as well as its CEO Rick Yan. Its largest shareholder, Recruit Holdings, has since joined the consortium.

The take-private transaction came after the job search website saw its share price decline by more than half from its all-time closing high of US$113.06 in June 2018 to a two-year low in March of last year before rebounding somewhat. The company’s shares jumped nearly 25 per cent since it announced the updated privatisation proposal in May.

Daily trading volume of 51job Vs Manpower on US exchanges 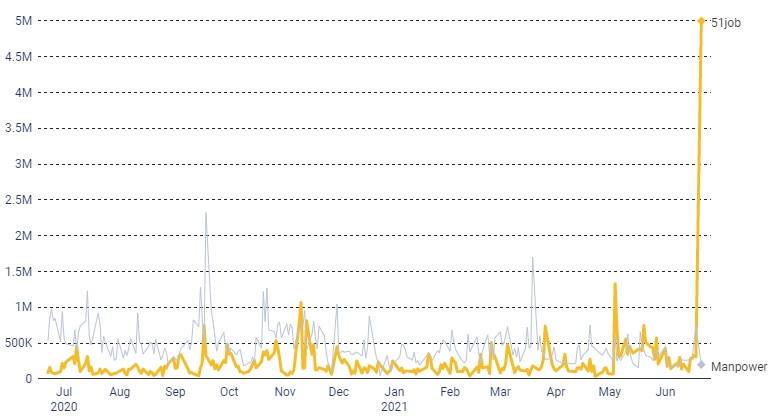 Offered to investors at US$79.05 in cash per American depositary share, the deal represents a 28.89 per cent premium to its closing price on May 3, the day it announced it had received an updated, non-binding proposal to go private. The transaction is expected to close in the second half of 2021.

When compared with US-listed competitors, the daily trading volume of 51job.com has averaged just about half that of Manpower Group, the staffing and recruitment firm headquartered in Wisconsin with a global presence. Over the past 12 months, an average of 231,787 shares changed hands a day, or about just 0.3 per cent of the firm’s total number of common shares outstanding, data from Nasdaq and 51job.com’s filing shows.

Companies with low trading volumes generally make a case that minority shareholders would be better off exiting at a premium through the privatisation offer rather than trying to cash out in the stock market.

A representative for 51job.com did not respond to a request for comment on Tuesday.

Since the beginning of last year, 20 Chinese companies agreed to privatisation deals worth US$20.5 billion, the largest number of such transactions since two dozen US-listed Chinese companies went private in 2015, according to data provider Refinitiv.

Online classified advertisements website 58.com; Sina Corporation, the operator of social media platform Weibo; and Ruhnn Holding, which uses “key opinion leaders”, or online influencers, to market brands in China, are among the companies that have decided to go private in transactions with private equity firms or their founders since June of last year.

The rush by some Chinese companies to consider privatisation comes against the backdrop of heightened US-China tensions and threats of potential delistings of firms over potential ties to the Chinese military and a long-running accounting dispute between Washington and Beijing weighing on valuations.

It also follows a trying 18 months for the global economy with the coronavirus pandemic forcing local lockdowns and changing consumer and business behaviours.

Another reason is low valuations.

“It’s usually a valuation question,” said Marcia Ellis, global chair of private equity group at law firm Morrison & Foerster. “A lot of the China-related companies that are listed in the US suffer a sort of China discount, for various reasons. I think a lot of these people think if their company were listed in Hong Kong or in China they would have a much higher valuation.”

Asia-Pacific based private equity firms, such as DCP, were sitting on a record US$446 billion in dry powder as of April and the industry’s assets under management is expected to top US$6 trillion by 2025, according to data provider Preqin.

“Asia-Pacific has been an engine driving global growth for more than a decade now and is in the middle of a historic transformation,” Mark O’Hare, Preqin’s founder and CEO, said. “Investor demand to access this fast-growing and diverse region remains robust, while structural challenges to deploy capital are easing.”

However, the US capital market – and its vast investor base – remains appealing to many Chinese firms seeking a higher profile globally or necessary cash to expand.

For some companies, the calculus may come down to shrinking stock prices, low trading volumes and the potential from a more receptive audience with a later listing closer to home.

In a surprise announcement two years ago, Semiconductor Manufacturing International Corporation, China’s biggest chip maker, said it planned to delist from the New York Stock Exchange, citing low trading volumes and high listing costs after 15 years of being publicly traded in the US. The move came as the US-China trade war targeted the technology sector.

The company’s shares soared more than 200 per cent in its first day of trading last July when it debuted on Shanghai’s technology-focused Star Market, but have come back to earth in recent months.